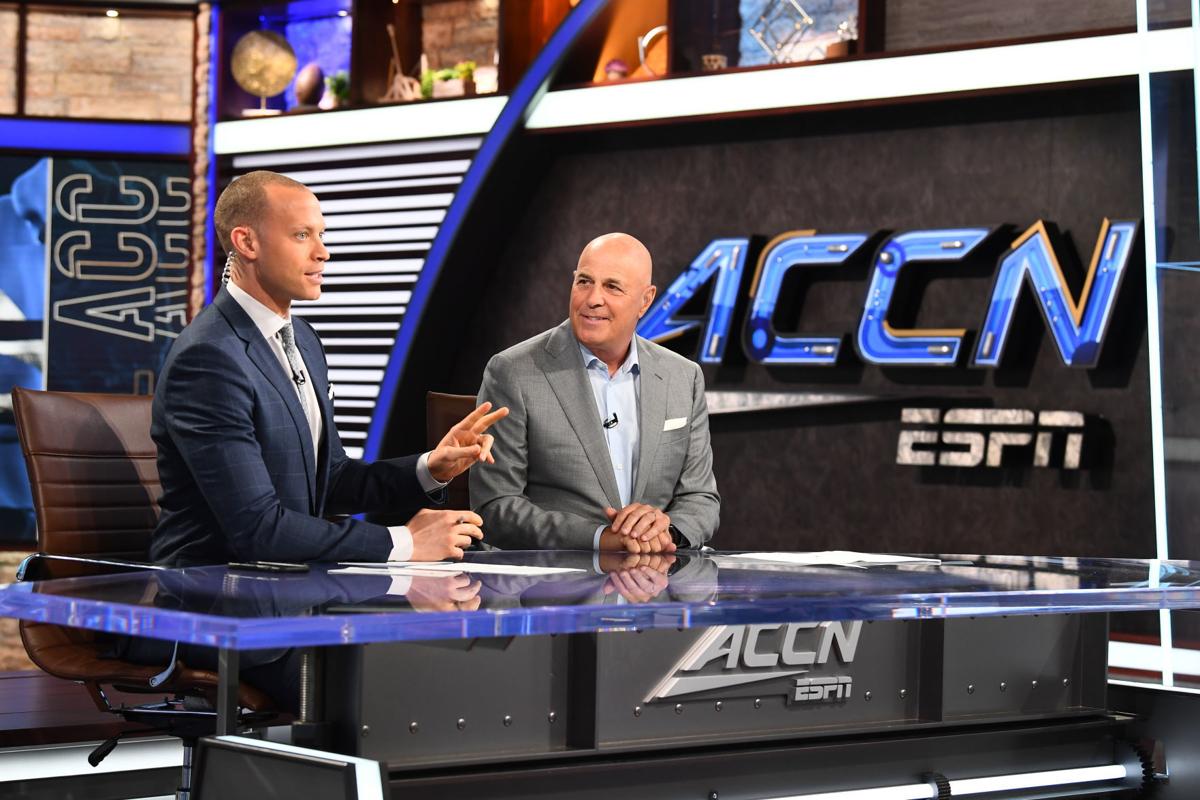 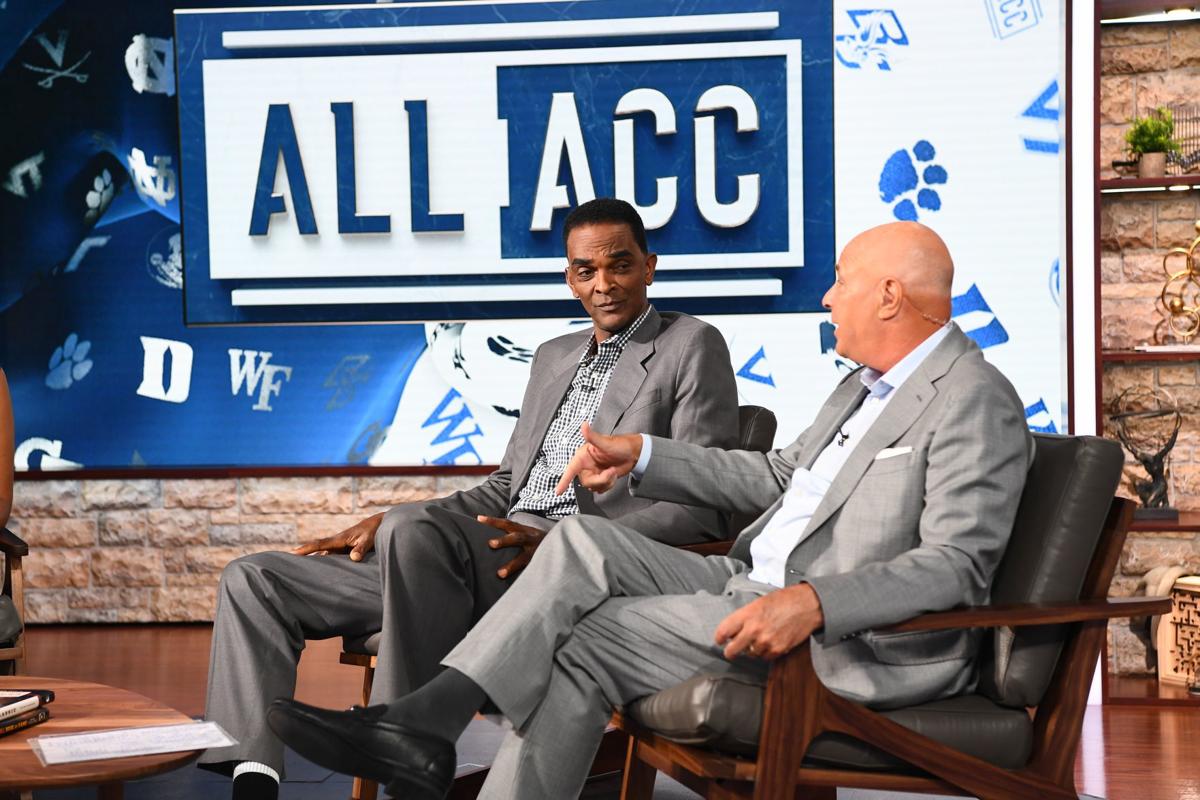 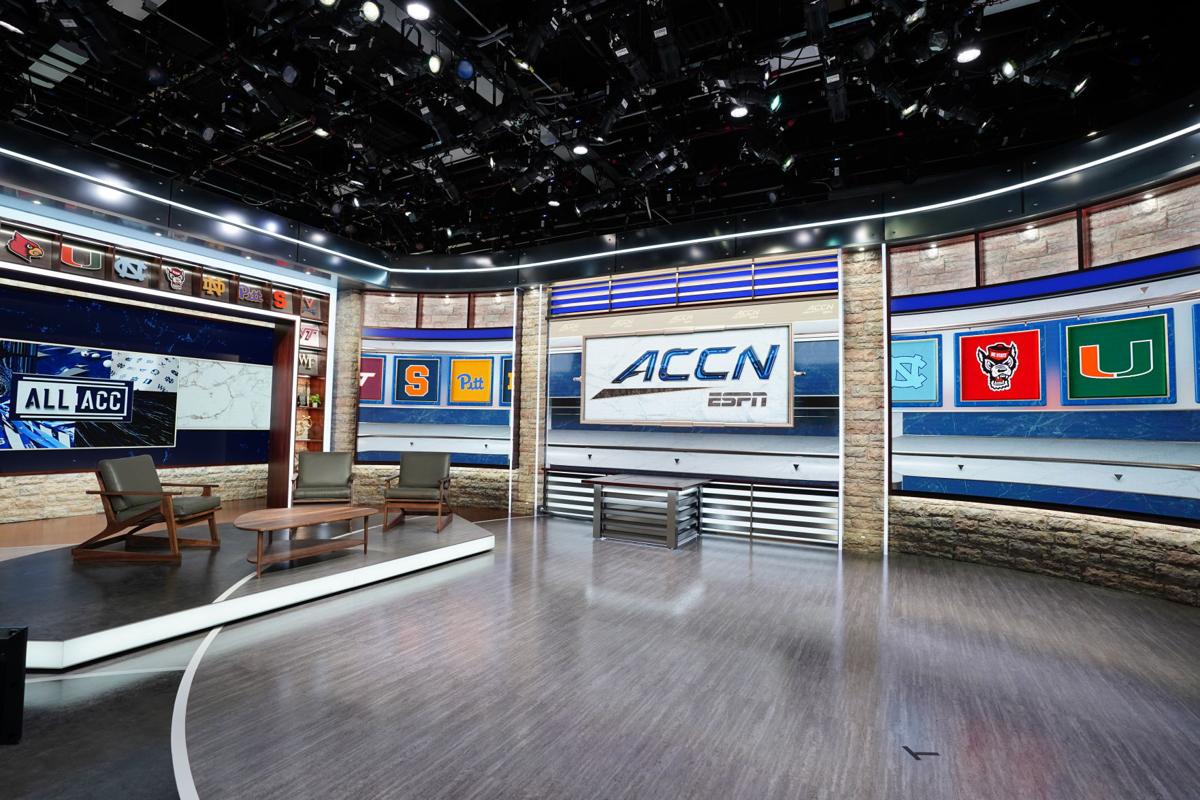 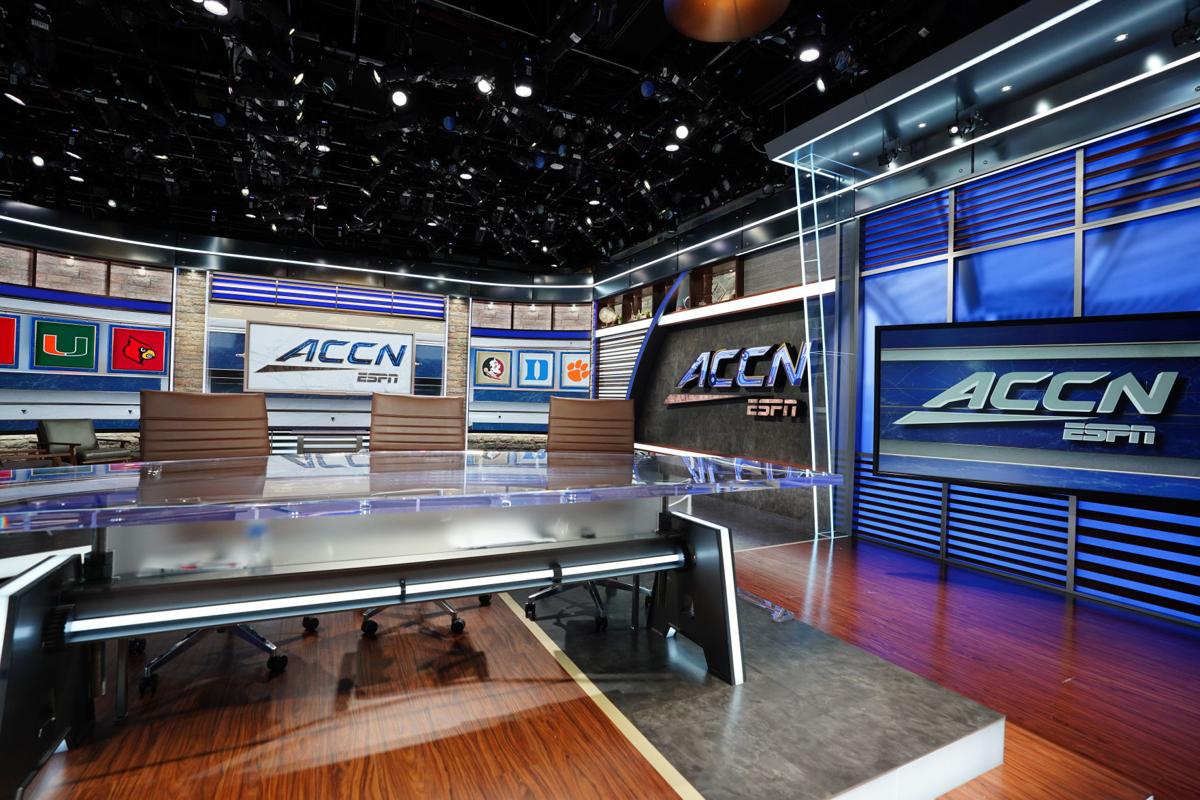 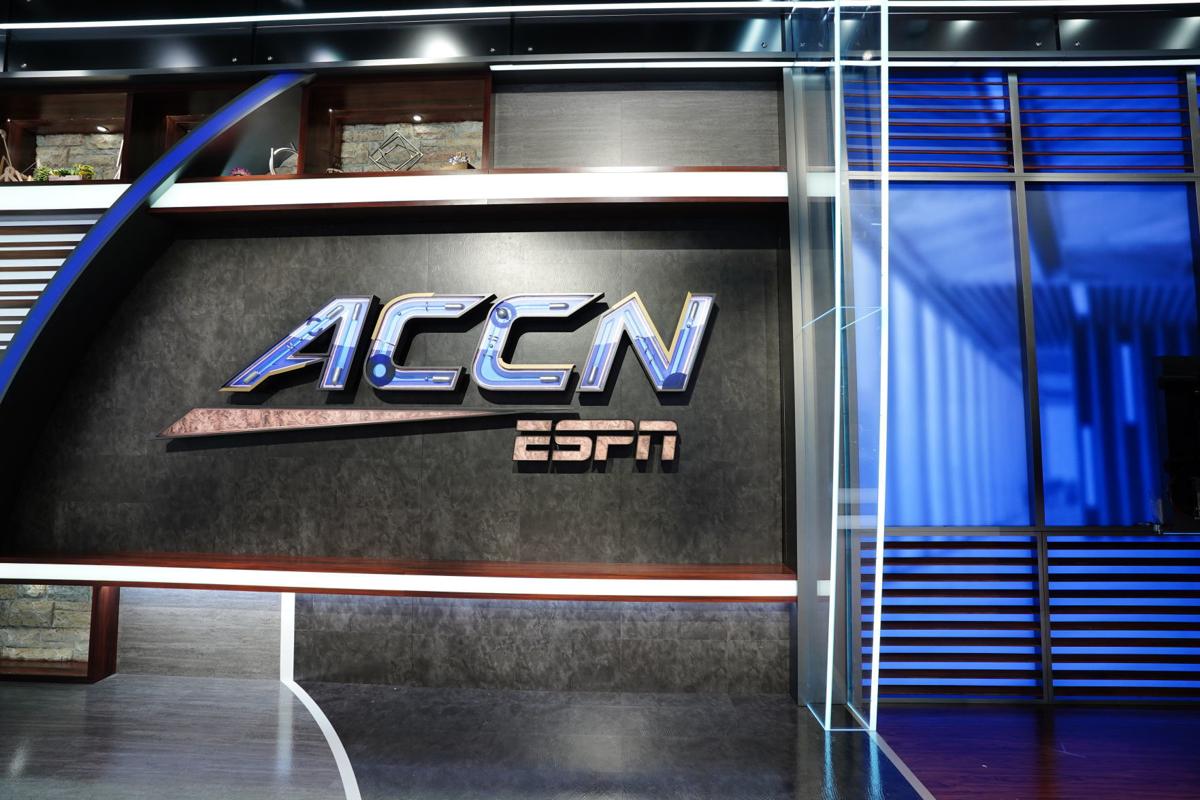 The ACC Network studios are in Bristol, Connecticut. The channel will air both the Virginia Tech and Virginia football openers Saturday. 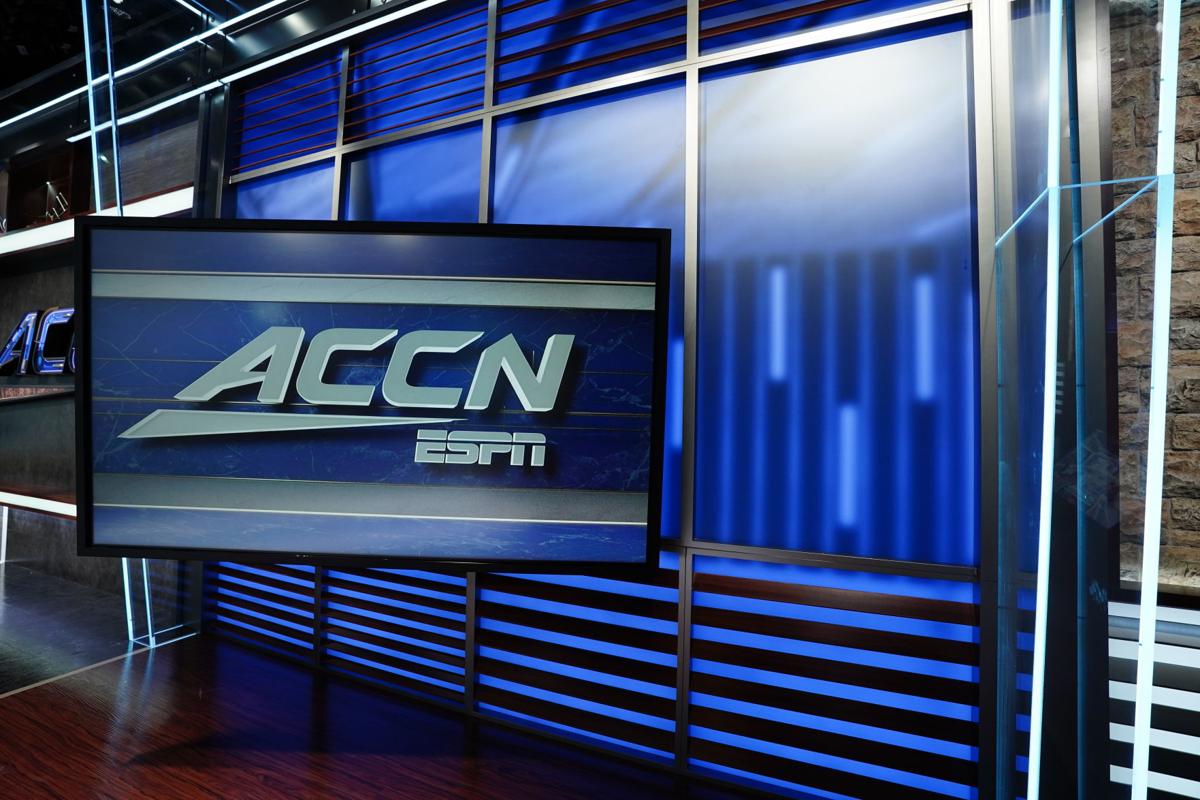 The ACC Network studios are in Bristol, Connecticut. The channel does not have deals with Cox cable, Comcast cable or Dish Network. 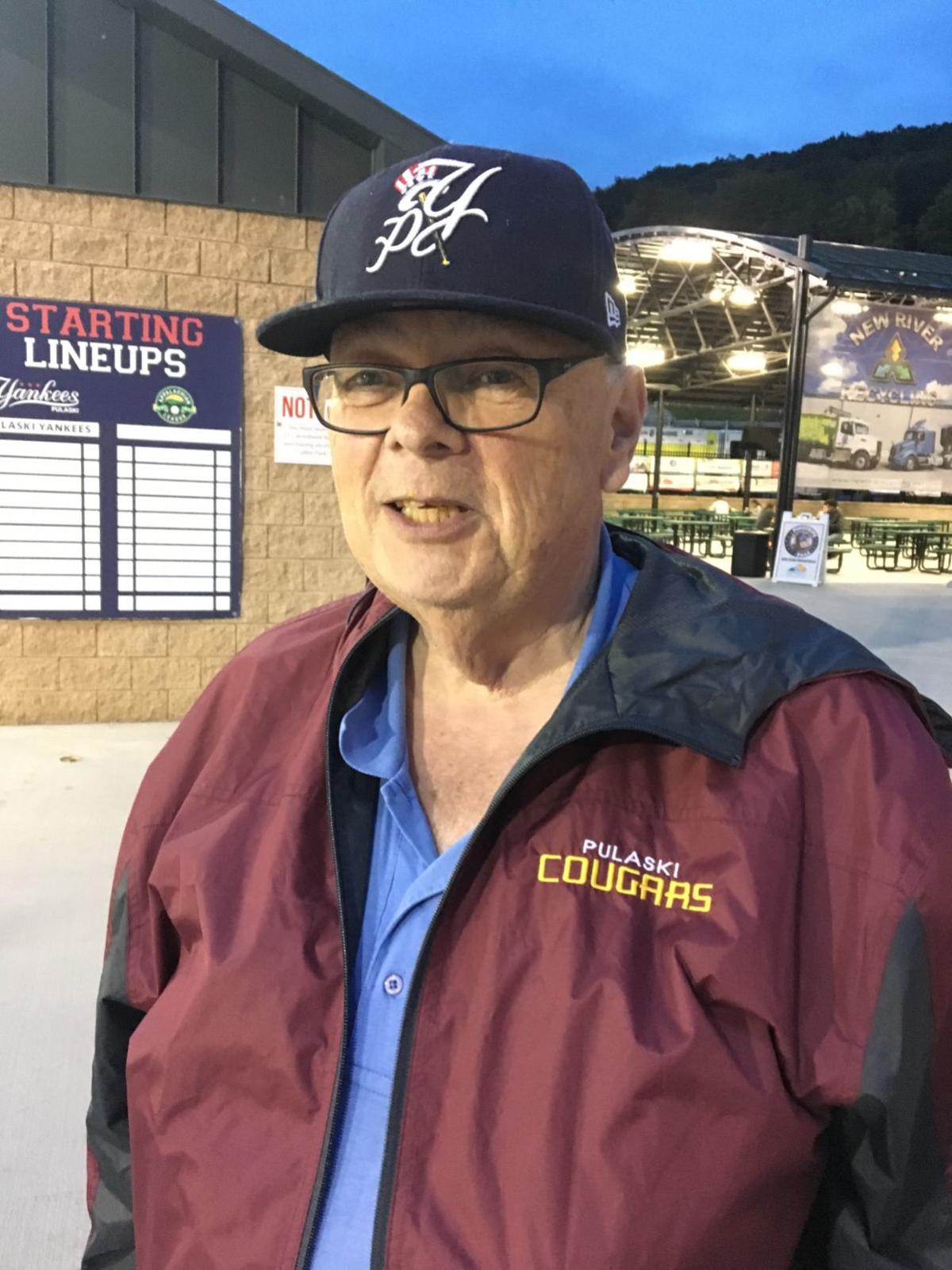 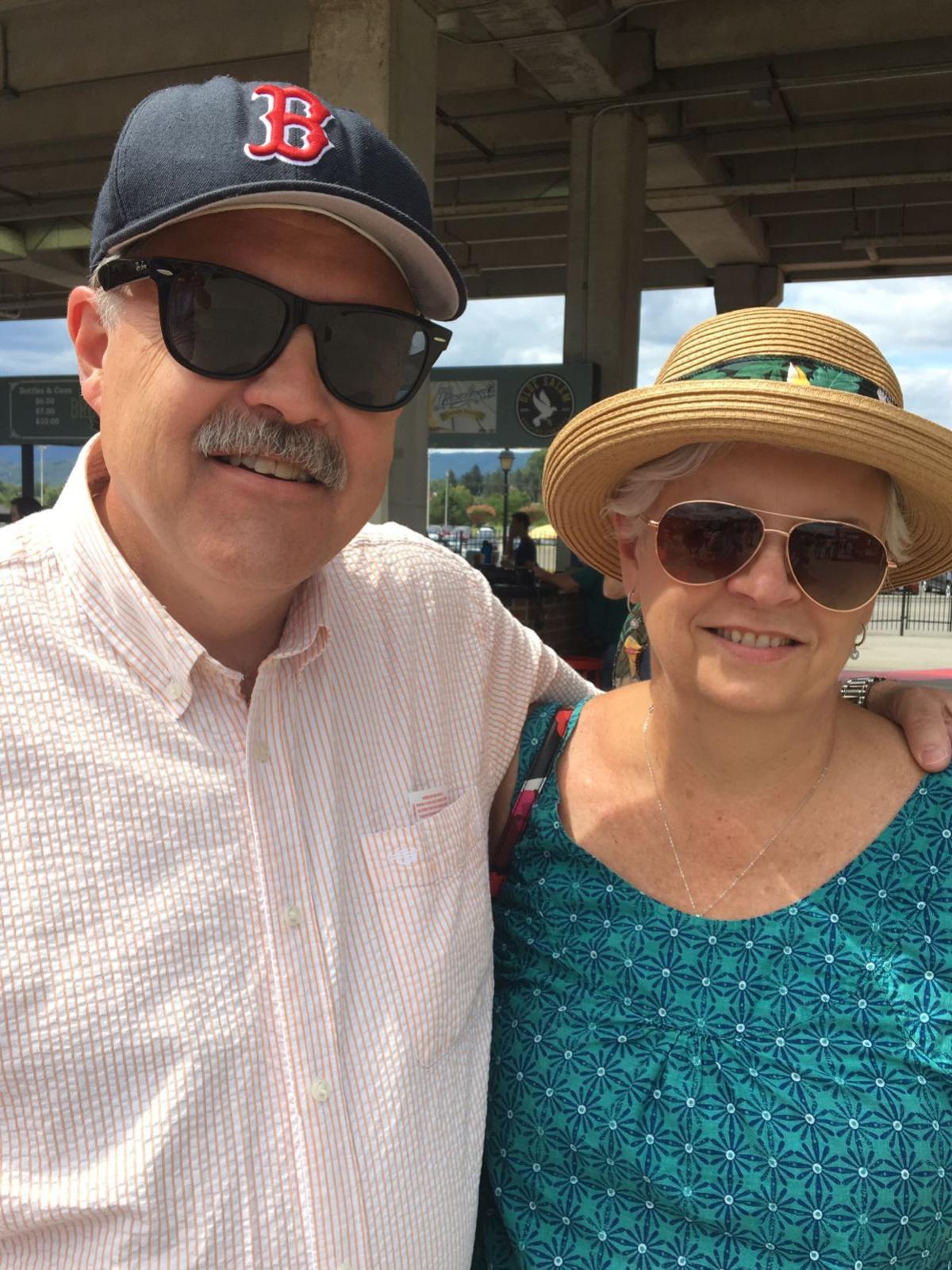 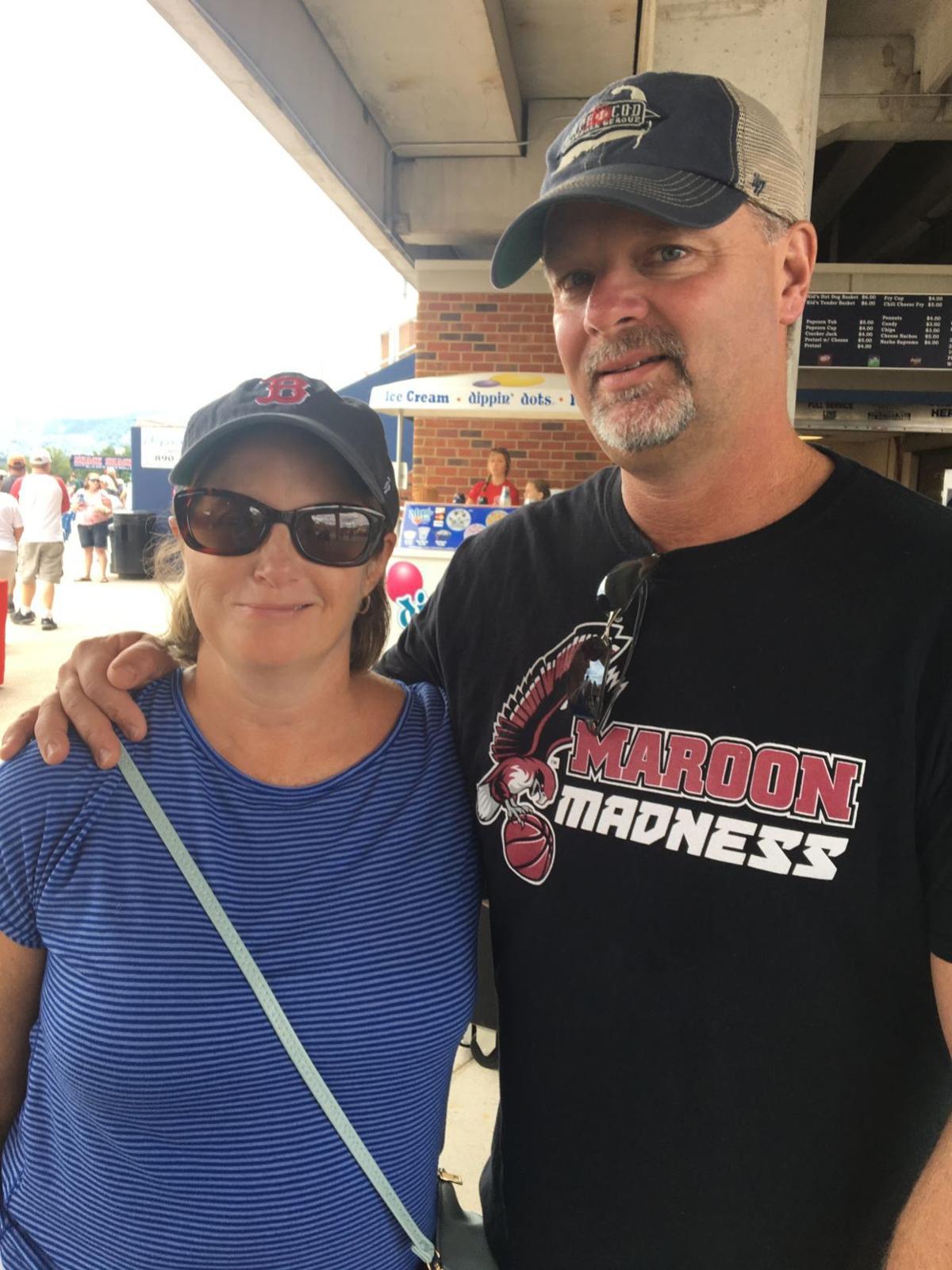 Cox customers Sandra and Bill Pratt of Vinton. Bill is a Syracuse fan, while Sandra is a North Carolina fan. 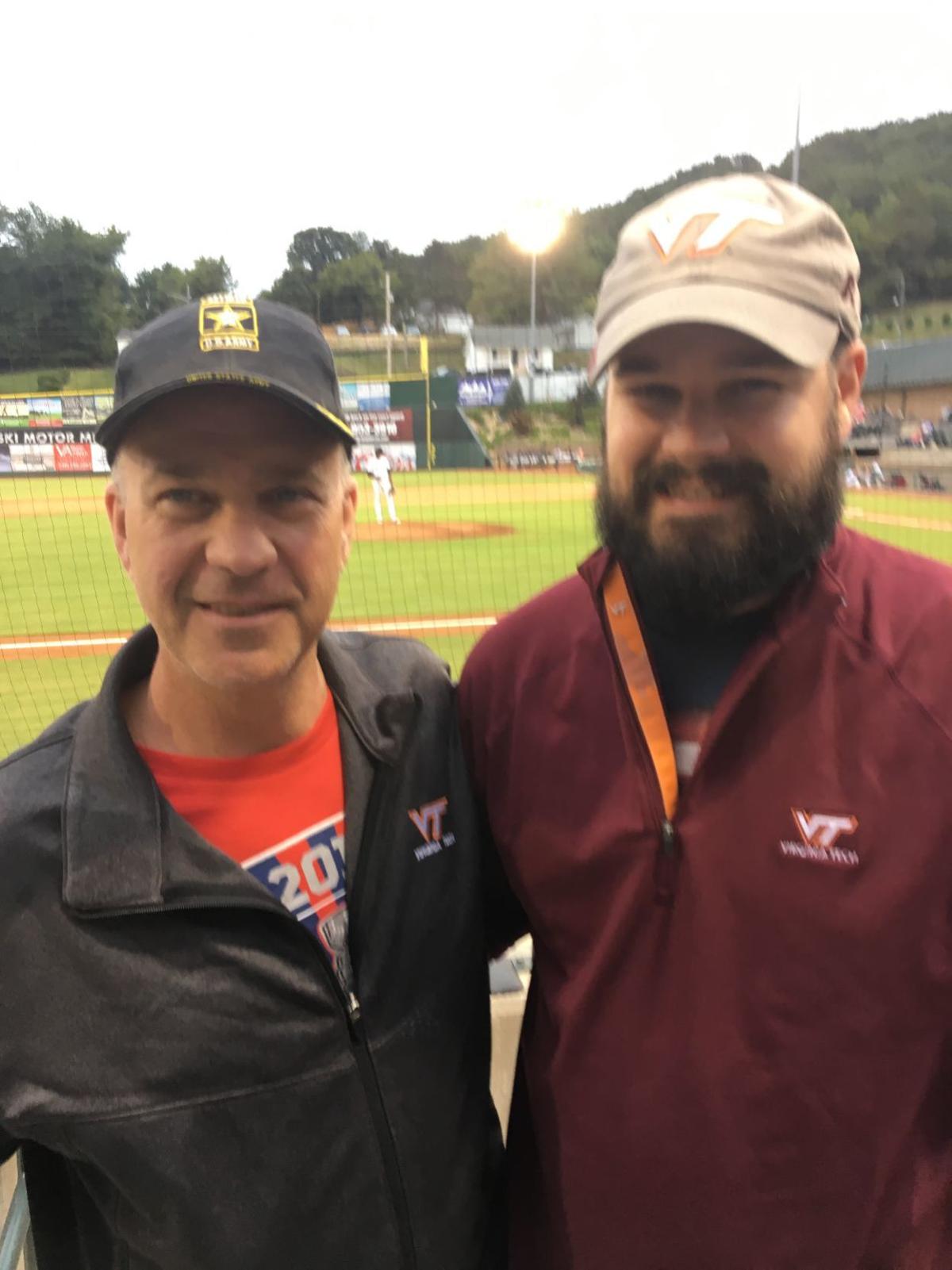 Hokies fans Tim and Sean Leake of Blacksburg. Tim has Comcast, while his son has YouTube TV. 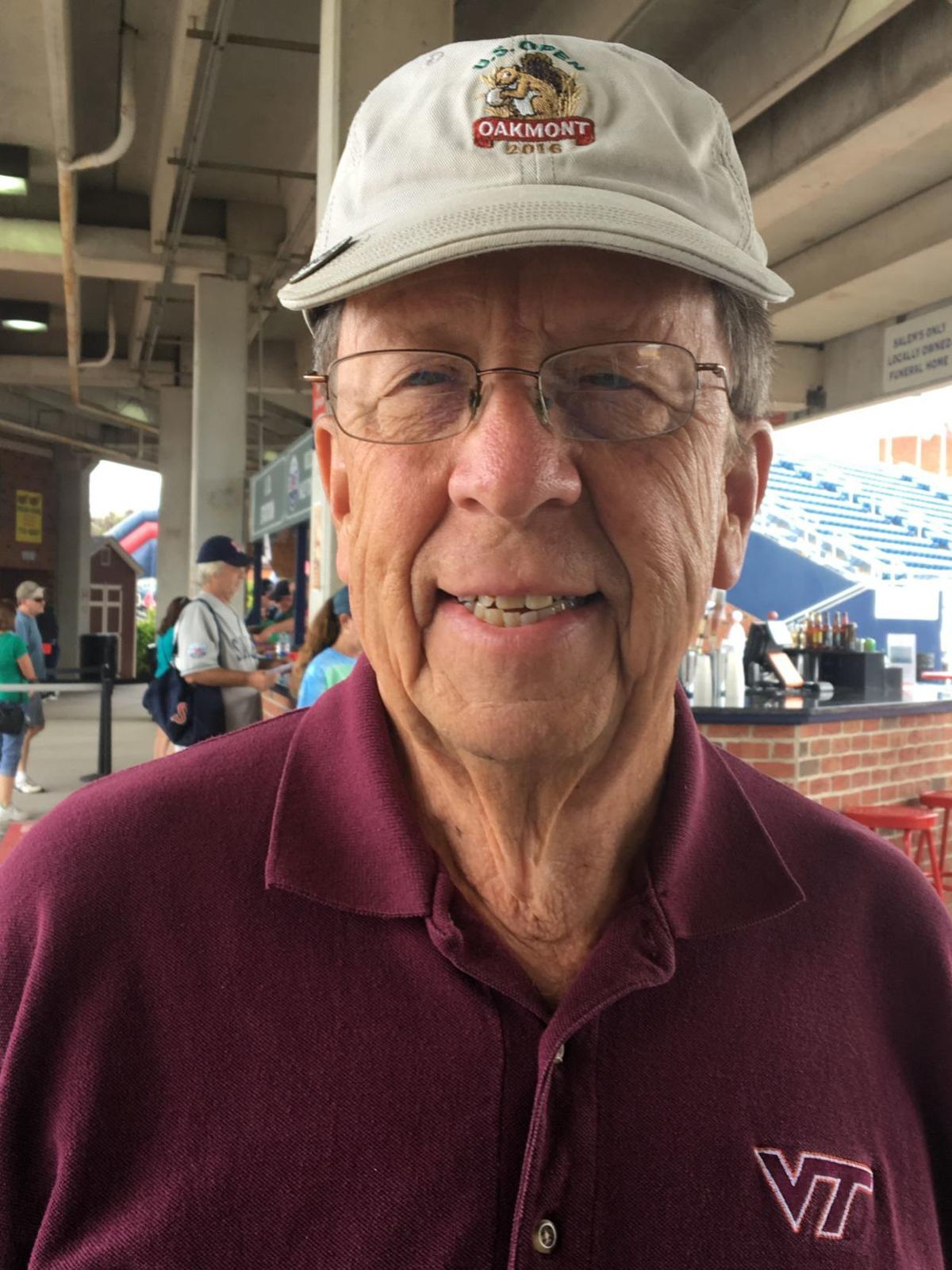 The ACC Network studios are in Bristol, Connecticut. The channel will air both the Virginia Tech and Virginia football openers Saturday.

The ACC Network studios are in Bristol, Connecticut. The channel does not have deals with Cox cable, Comcast cable or Dish Network.

Cox customers Sandra and Bill Pratt of Vinton. Bill is a Syracuse fan, while Sandra is a North Carolina fan.

Hokies fans Tim and Sean Leake of Blacksburg. Tim has Comcast, while his son has YouTube TV.

There are a lot of disgruntled ACC fans in the area.

The ACC Network, a TV channel which debuted last week, still has no deals with Cox cable, Comcast cable (Xfinity) or the Dish Network satellite service.

Area residents who are customers of one of those three TV providers expressed their frustration this week when interviewed at Salem Red Sox and Pulaski Yankees games.

UVa fan Charles Harris of Roanoke said he intends to drop Cox cable in favor of a TV provider that has the ACC Network.

“I’m going to find somebody that’s got the ACC Network,” he said. “I’m getting ready to dump Cox anyway because every time I turn around the price is going up. … If they don’t have the ACC channel, that’s kind of a clincher.”

“I’ll just have to listen to it on the radio,” said Hokies fan Bob Anderson, a Cox customer who lives in Roanoke County. “I hate to miss out on it.”

Anderson won’t be switching from Cox to one of those providers, though.

“My wife don’t like football anyhow, and if I did that, it’d be a problem,” Anderson said. “I’ve told her I’d like to get DirecTV before [and she said], ‘We’re not putting nothing on this roof.’ ”

“I’ve sent emails every day to Comcast, going, ‘You’ve got to pick up the ACC Network for me,’ ” he said. “I just wish the ACC would’ve thought about working earlier with the providers to make sure they could provide it to all their customers.”

His son, Blacksburg resident Sean Leake, has YouTube TV. So Sean Leake will go over to his dad’s house Saturday so they can both watch the Hokies. The younger Leake will use Chromecast, a streaming media adapter, to transfer YouTube TV from his phone to his dad’s TV set.

Cox has customers in Roanoke and Roanoke County.

Bill Pratt of Vinton is a Syracuse fan, while his wife, Sandra, roots for North Carolina. They are Cox customers.

“Once we heard about the ACC Network, we started worrying about how we’re going to be able to watch the games,” Sandra Pratt said. “Our problem is that we have to get our internet through Cox; we don’t have any choice.”

“So if we drop the cable, we lose their bundle savings and then we’re paying $100 for internet,” Bill Pratt said. “It’s just frustrating.”

He has already complained to Cox three or four times about the company not having the new channel.

Cox is still negotiating with the ACC Network, according to a Cox account services representative in an online chat Wednesday.

Virginia Tech graduate Paul Swecker of Boones Mill has Shentel cable, so he has watched the new channel.

UVa fans Jim and Cynthia Messier of Bedford are Dish customers, so they don’t have the ACC Network.

“My father has DirecTV, so I’ll probably go there [to watch the UVa opener].”

The Messiers had already switched from Shentel cable to Dish because Shentel does not have MASN. Jim Messier said they made the switch on “blind faith,” hoping Dish would strike an ACC Network deal by the time the channel launched.

The Messiers signed a two-year contract with Dish, so switching is not an option.

“I might pay for Hulu [in addition to Dish], I don’t know. Or YouTube,” Cynthia Messier said. “I’d really hate to do it, though.”

Duke fan John Garrett of Blacksburg also has Dish. He said switching providers is not an option for him.

“I live in the country, way out there. I’ve tried DirecTV and all the rest of them, and it just doesn’t come in good,” he said.

UVa fan Duane Wheeling of Roanoke and his wife, Katie, a Virginia Tech fan, have had DirecTV for years. So they have the ACC Network.

“We just got an offer from Dish that I was contemplating, but it didn’t have the ACC Network,” Duane Wheeling said. “That is the deciding factor.”

Hokies fans Jerry and Judy Haynes of Dublin also have DirecTV, but not the tier that includes the ACC Network. Jerry Haynes said he would have to pay $8.99 more a month for the package that includes the new channel.

Virginia Tech graduate Bobby Blankinship of Roanoke and his wife, Marissa, dropped Cox cable three years ago in favor of Playstation Vue. So they have the ACC Network.

They recommend their streaming service.

UVa fan James Cabiness of Christiansburg has the AT&T TV Now (formerly DirecTV Now) streaming service, which does not have an ACC Network deal.

What will he do for the Cavaliers’ opener Saturday?

“I’ll just have to listen to them on the radio,” he said.

Some of the TV providers who are carrying the ACC Network.

Some of the TV providers who are not carrying the ACC Network.

ESPN and DISH have an agreement in principle to distribute the ACC Network on DISH TV just in time for tonight’s opener between the Georgia Tech Yellow Jackets and the #1 ranked Clemson Tigers. You can find tonight’s game on channel 402. "

It was there. Watched it. Set up to record the VT game.

HUH? All the "fans" interviewed complain that "they are going to drop Cox because the rate keeps increasing", but the main reason their rates increase is because the programming they provide requires them to "pay a retransmission fee". And they naturally PASS THAT CHARGE onto YOU the subscriber. That's Cox's "catch 22" people are upset IF they don't carry what is obviously a money grab by rich University athletic programs, or catch it when they raise their bills $4 or $5 a month to cover the cost of the ACC channel. We have the same issue every year or two with "local" OTA channels who are demanding increases in their retransmission fees from the cable company, then taunt the viewers to "TELL COX YOU WANT YOUR ABC or CBS or FOX etc". Not telling you your ASKING Cox to also raise your cable bill. I have no cable, just OTA TV and got 4 or 5 football games and the NASCAR race today, more than I needed to watch to kill my day.