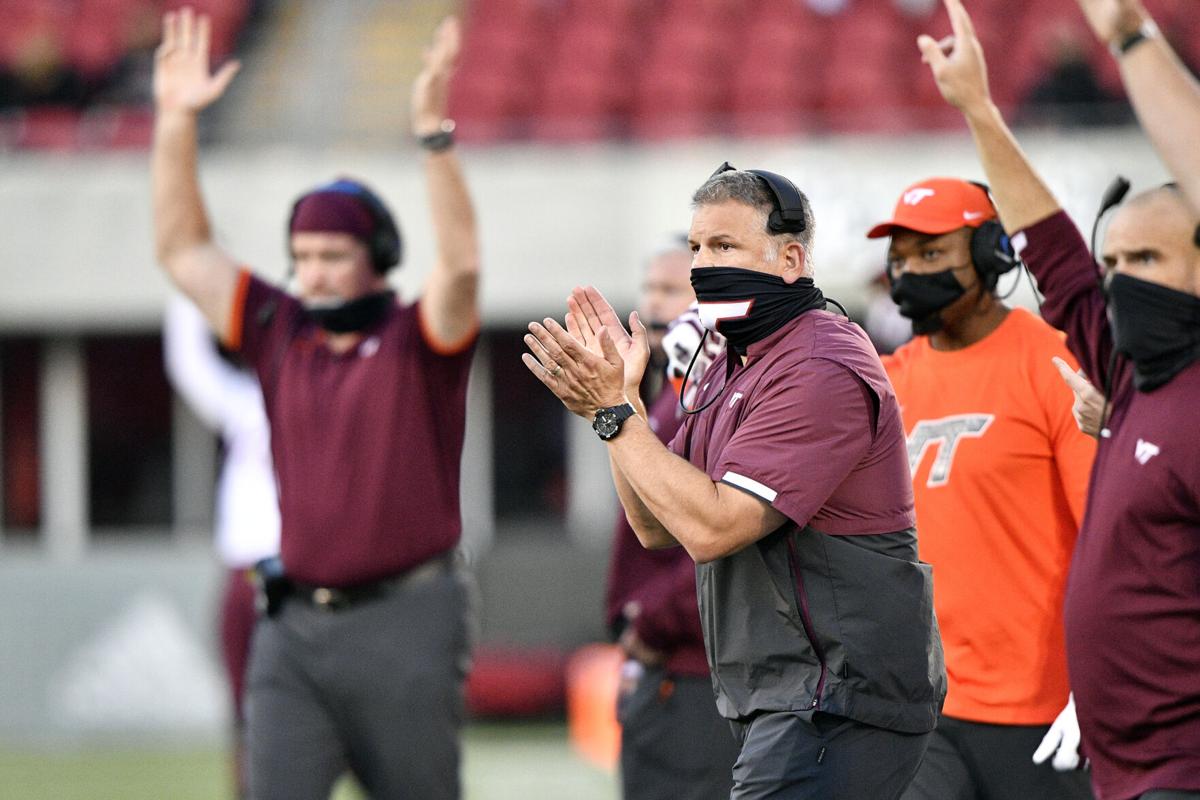 Virginia Tech coach Justin Fuente (center) cheers on his team from the sideline against Louisville earlier this season.

Virginia Tech head coach Justin Fuente leads his team onto the field prior to the start of the Liberty game. Fuente is returning as the Hokies’ coach next season. 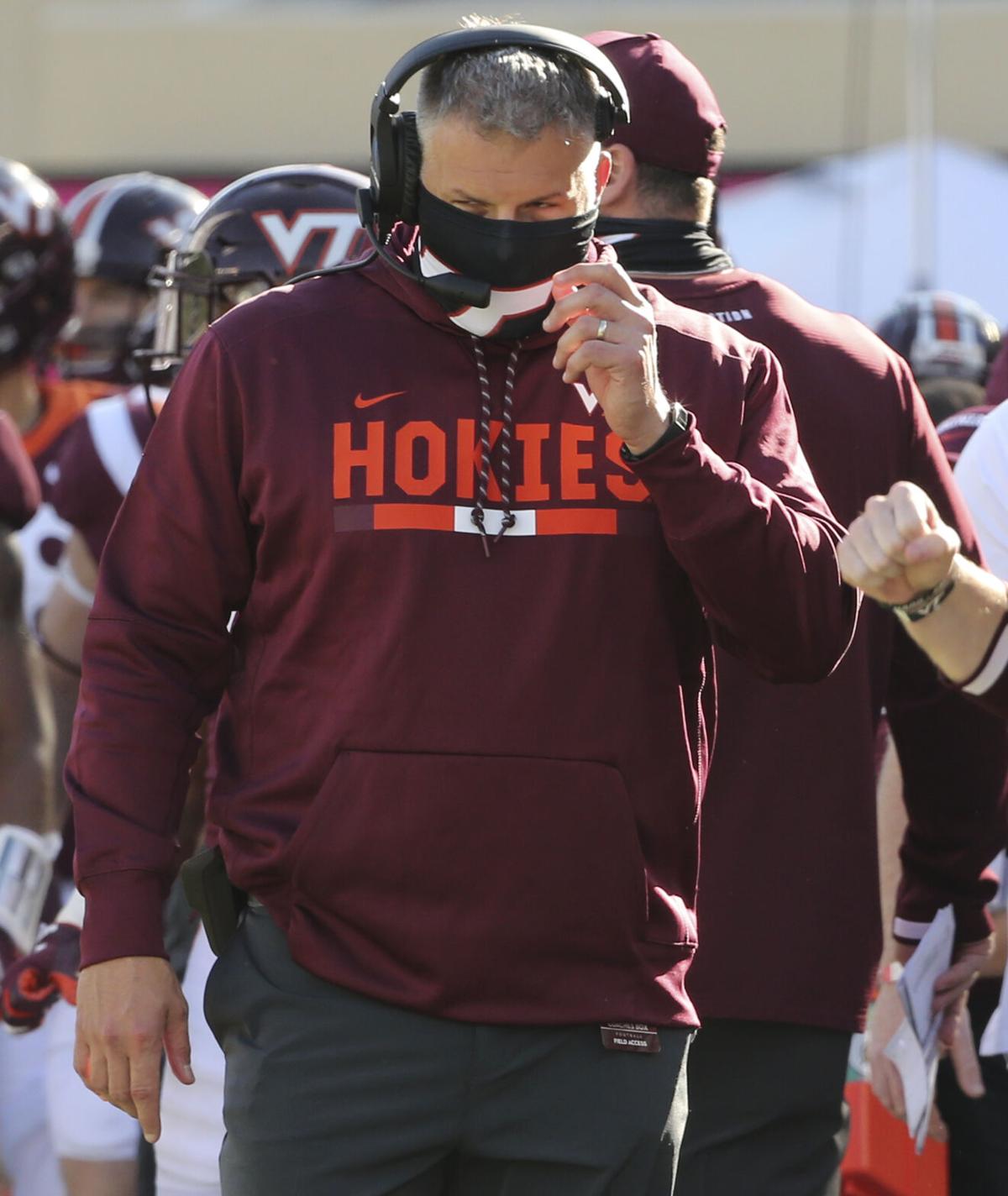 Virginia Tech head coach Justin Fuente on the sideline in the second half of the Miami football game in November.

Babcock gave a thorough account of his decision-making process in an hourlong news conference Tuesday. His 4,000-plus word opening statement was a marathon itself, lasting 22 minutes.

“I believe in Justin,” Babcock said. “I’m not unaware of what we need to do, and you know, it’s not always the fashionable thing to keep somebody when everybody’s yelling, but he’s our guy and he’s a Hokie and I believe he gives us the best chance to be successful and I’ll take that responsibility.”

It was the first time Babcock has spoken to reporters since the football team’s initial game against Virginia was canceled in September.

Tech finished 5-6 (5-5 ACC) this season and it marked the first time the program finished with a losing record in the regular season since 1992.

The Hokies made a promising 3-1 start while averaging 42 points and 312 rushing yards per game — all while battling a significant number of COVID-related absences — but they faltered down the stretch starting with a last-minute loss to Liberty that turned into a four-game losing streak.

The NCAA’s decision to waive bowl eligibility requirements means the team could receive a bowl invite to extend their streak of 27 straight bowl appearances, but the players will decide whether they would accept an invitation later this week.

Babcock’s evaluation of the football program started in early November. He had weekly meetings with Fuente throughout the season, but he worked diligently behind the scenes to get input from a wide assortment of voices including fans, donors, former players (including Bruce Smith and Michael Vick), current players, NFL scouts and even personnel from opposing teams.

The process ended Monday with a four-hour meeting between Fuente and Babcock that left the athletic director confident in the direction of the program. Babcock didn’t mandate Fuente make any specific staff changes, and no changes were made to Fuente’s contract, which runs through the 2024 season.

“We covered recruiting extensively, the depth chart, strength and conditioning, coaches, coaching, community outreach, fan donor engagement, his media appearances, former player involvement, that this is a results-driven business, what the identity to our team is and needs to be, where we need help and support, is he committed, does he want to be here and do right here?” Babcock said. “And his answers were honest and sincere and genuine and, again, certainly energized me.”

But Babcock highlighted some improvements Fuente needs to make in some of those areas particularly with recruiting and fan engagement.

Tech goes into Wednesday’s early signing day with a 2021 class ranked No. 44 nationally and No. 11 in the ACC, according to 247 Sports composite rankings. It’s the second straight year the Hokies are ranked near the bottom of the league (last year Fuente had the worst ranked recruiting class of his tenure, ranked No. 76 and dead last in the conference).

Babcock specifically mentioned the importance of making more inroads within Virginia, where Tech struck out with the top ranked recruits for a second straight year.

“You need to recruit special and specific young people to stay dedicated here and be here,” Babcock said, referencing the changing landscape of college football and prevalence of transfers.

As for fan engagement, Babcock said the stress of the 2020 season forced Fuente to turn “inward” to his detriment and to the program’s detriment.

“If people can understand you and feel a part of it and understand your passion and how you feel about being here, then this is going to be a little bit easier,” Babcock said.

Babcock believes the two had what he described as a “breakthrough” on the topic Monday, and this one area where Babcock plans on specifically making a pointed effort to be more involved.

“I believe I can help educate him on Virginia Tech, on media, on donors, on just being a listening ear,” Babcock said. “We both talked pretty intimately about how lonely a job they can be, and he can help me as well. Football coaches are tough and all that. It’s not always easy to ask for help, but I also take ownership in some of our falling short on the scoreboard because of my executive coaching.”

For Babcock, the decision to “tear down” the program and start over just wasn’t an attractive option especially with the way COVID-19 left the new defensive coaching staff little meaningful preparation time heading into the season, and the way the virus spilled into the regular season when it knocked out up to three-fourths of the team (and eight out of 10 coaches) during September and October.

“We have a plan, we have hope for the future and we did what we thought was best,” Babcock said. “We felt like this is the most likely successful path. I feel good about it. I’m paid to do what is best, not always easiest or to pacify some others.”

Virginia Tech coach Justin Fuente (center) cheers on his team from the sideline against Louisville earlier this season.

Virginia Tech head coach Justin Fuente leads his team onto the field prior to the start of the Liberty game. Fuente is returning as the Hokies’ coach next season.

Virginia Tech head coach Justin Fuente on the sideline in the second half of the Miami football game in November.