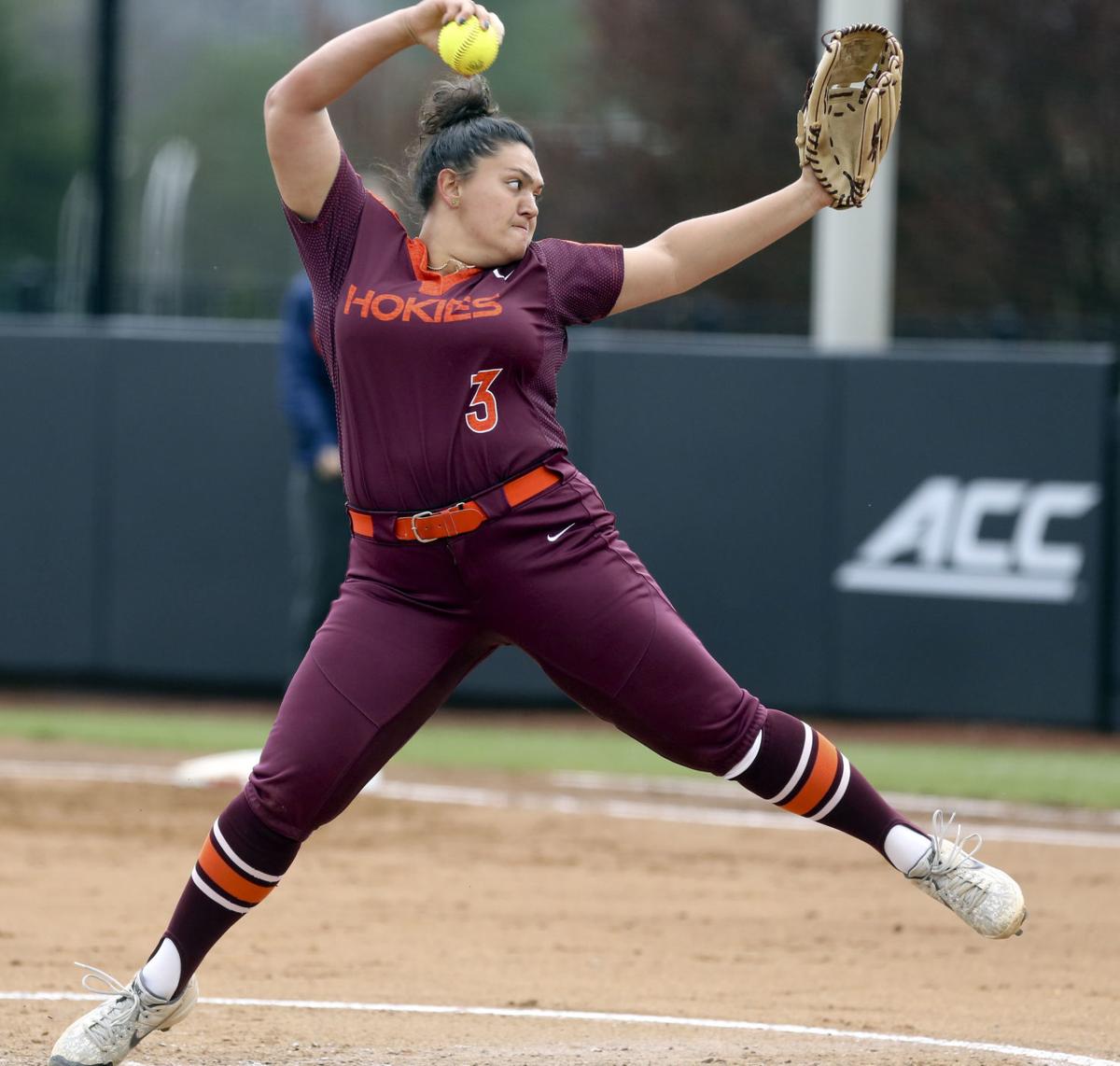 The news was a surprise because Gordon had never announced that he had asked Tech for a release from his letter-of-intent. But he was indeed given his release, according to a source.

Gordon, a senior at Sidney (Ohio) High School, is rated the No. 37 point guard in the nation and the No. 5 recruit in Ohio by ESPN.

Yavuz Gultekin, another one of Tech’s four fall signees, also tweeted Saturday night that he had committed to Texas A&M. Gultekin had announced Thursday that he had decided to look for a new college.

Anthony Harris, a fall signee who received his release April 4, has not yet picked a new school. He had tweeted that he would still consider Tech.

BLACKSBURG — The 20th ranked Virginia Tech softball team swept the ACC series by taking a double header from Virginia (16-25, 5-13 ACC) by the scores of 1-0 and 7-0 Saturday at Tech Softball Park.

Along with Friday’s shutout, it marked the first time in program history that Tech has held an opponent scoreless for an entire three-game series.

In the opener Lauren Duff singled to center field scoring Mackenzie Lawter, who had reached base on an error, in the bottom of the fifth inning and winning pitcher Keely Rochard sat Virginia down in order over the last two innings to preserve the win.

Rochard gave up one hit with eight strikeouts and no walks to gain her 16th win of the season.

Aly Rayle threw a six hitter giving up no earned runs with one strikeout and one walk for the Cavs.

In the nightcap, Carrie Eberle threw a four-hit shutout with five strikeouts and no walks for her 21st win of the season.

Meredith Slaw hit a two-run homer and Lawter added a solo shot and Kelsey Bennet drove in three runs with a two-run double and an RBI triple for the Hokies (37-6, 16-2).

In the opener Christina Biggerstaff threw a two-hit shutout with seven strikeouts and two walks as the Spartans scored four runs in the bottom of the sixth inning.

Talia Douglas and Destiny Freeman had one hit each for the Highlanders (18-25, 8-7).

In the nightcap, Radford fell behind 6-0 but put five runs on the board in the fifth inning with Douglas smacking a two-run double.

The Spartans answered with a three-run sixth inning and Biggerstaff sat the Highlanders down in order in the seventh to gain the save.

Freeman went 3 for 4 with an RBI and a run scored, and Sofia Tapia had two hits and drove in a run for the Highlanders.

BUENA VISTA — Madison Brumagin scored an unearned run in the top of the seventh inning and winning pitcher Ginger Lewis sat Southern Virginia down in order in the bottom half of the inning as the Spartans (20-12, 5-3 CAC) took the opener of a conference doubleheader 1-0.

In the nightcap, Lewis and Samantha Kiser combined to throw a one-hit shutout with Lewis picking up her second win of the day and the Spartans swept the twin bill with an 8-0 win in five innings.

Tara Hilton had the lone hit for SVU.

The softball doubleheader between Roanoke and Randolph-Macon for Saturday was postponed due to inclement weather in the Ashland area. The games will be made up at a date and time to be determined.

CHARLOTTESVILLE — Adrian Del Castillo homered and drove in four runs and Raymond Gil doubled and drove in two more as Miami (23-12, 8-8) put up five runs in the third and three more in the sixth to claim the opener of a doubleheader with Virginia (21-14, 8-8) by a 9-6 score.

Gil added a solo homer in the nightcap for the Hurricanes as they completed with sweep with a 2-1 victory. Jack Weiler drove in a pair of runs and Tanner Morris hit his nation-leading 19th double in the opener.

Griff McGarry took the hard-luck loss in the nightcap, allowing only two runs on four hits in 6 2/3 innings for Virginia.

The Blue Devils claimed the opener, a resumption of a suspended game from Friday, by a 4-0 score.

Ethan Murray doubled and drove in two runs for Duke in the opener, which got a combined four-hit shutout from Ben Gross and relievers Matt Dockman and Thomas Girard.

Nic Enright got the win for the Hokies in the nightcap, scattering two runs on six hits and eight strikeouts in 5 2/3 innings. Jaison Heard finished the final 3 1/3 innings without allowing a hit and striking out four.

Andrew Orzel, Brett Rodriguez, Lawson Hill and Hudson Byorick each had three RBIs in the opener for the Terriers.

Kent allowed four runs on only five hits in running his record to 5-2, and has struck out 92 and walked only 16 in his nine appearances this season.

BUIES CREEK, N.C. — Spencer Packard and Collin Wolf each drove in a pair of runs for the Camels in their Southern Conference win over the Highlanders on Saturday.

Campbell (22-13, 11-3) starter Michael Horrell scattered two runs on six hits and struck out four in running his record to 6-1 on the season.

On Friday, lefty Zack Ridgely allowed one earned run, scattering four hits with three strikeouts and no walks as the Highlanders knocked off the Camels 6-2.

The game was delayed three hours due to heavy rain in the area and did not end until early Saturday morning.

Spencer Horwitz and Colby Higgerson drove in a pair of runs and Bruce Hudson threw three hitless innings in relief for Radford.

The Yellow Jackets completed the sweep with a 3-0 win in the nightcap behind seven shutout innings from Michael Zubovich.

Pinch-hitter Tyler De Meo accounted for the lone run for the Maroons with an RBI single in the bottom of the eighth inning of the opener.

Zach Lowenberg doubled home a run and Matthew Jones and Jason Volpicelli drew bases-loaded walks for the Generals in the crucial fifth inning of the nightcap.

Seven of the starting nine had at least one RBI for the Marlins in the opener.

DURHAM, N.C. — Joe Robertson scored three goals and dished out an assist and four other Blue Devils score two goals apiece as Duke (10-3, 2-2 ACC) outscored Virginia 7-2 in the second half.

Jake O’Brien scored four goals and Jared Medwar added three, and the Tigers (11-3, 6-1 ODAC) outscored the Maroons 6-3 in the second period, which became the difference in the game.

Ian Davies posted 12 saves in the net for the Maroons.

LEXINGTON — Evan Tyler scored four goals, and the Dolphins (4-8, 3-2 SoCon) outscored the Keydets 11-3 in the second half.

VMI (4-6, 0-5) was led by John Daniel with three goals and Jon Fant and Eric Lane with two goals each.

The Knights (5-10, 0-4) were led by Zach Danneman with three goals and Chandler Wescott and Carter Bean with two goals apiece.

CHARLOTTESVILLE — Sammy Mueller finished with a career-high eight points on six goals and two assists as the Cavaliers (11-5, 2-4) downed the Cardinals (5-11, 0-6) at Klockner Stadium.

BLACKSBURG — Sam Apuzzo, Kenzie Kent, Dempsey Aresenault and Cara Urbank all recorded hat tricks as the Eagles (15-0, 6-0 ACC) held off a late Hokies rally to hold on for the win.

Haley Tucker chipped in three goals and Maddy Graves and Brianna Hayes added two apiece for W&L which took a 13-4 lead to the half.

Emma Rogers netted two goals and Lindsey Carroll and Jennifer Shield added one goal each for the Highlanders (3-9, 2-2).

The Maroons put the game away with three goals in a five minute span of the second-half.

With the win, SVU will receive an automatic bid to the NCAA Division III Tournament.

Recabarren led the way with 27 kills and Paul Clark added 14 with Tagloa dealing out 49 assists.

Recabarren was named tournament MVP while Wilson and Danny Ainia were named to the All-Tournament team.

Quintas led the field at the end of day one, when the second round was suspended due to darkness, after finishing third in the opening round Friday.

Saturday saw the continuance of round two plus the final round of the tournament.

"We needed that one," Justyn Mutts said.

Tech improved to 5-1 in ACC play, while UVa remained winless in the league.

The Hokies scored the first 15 points of the game.