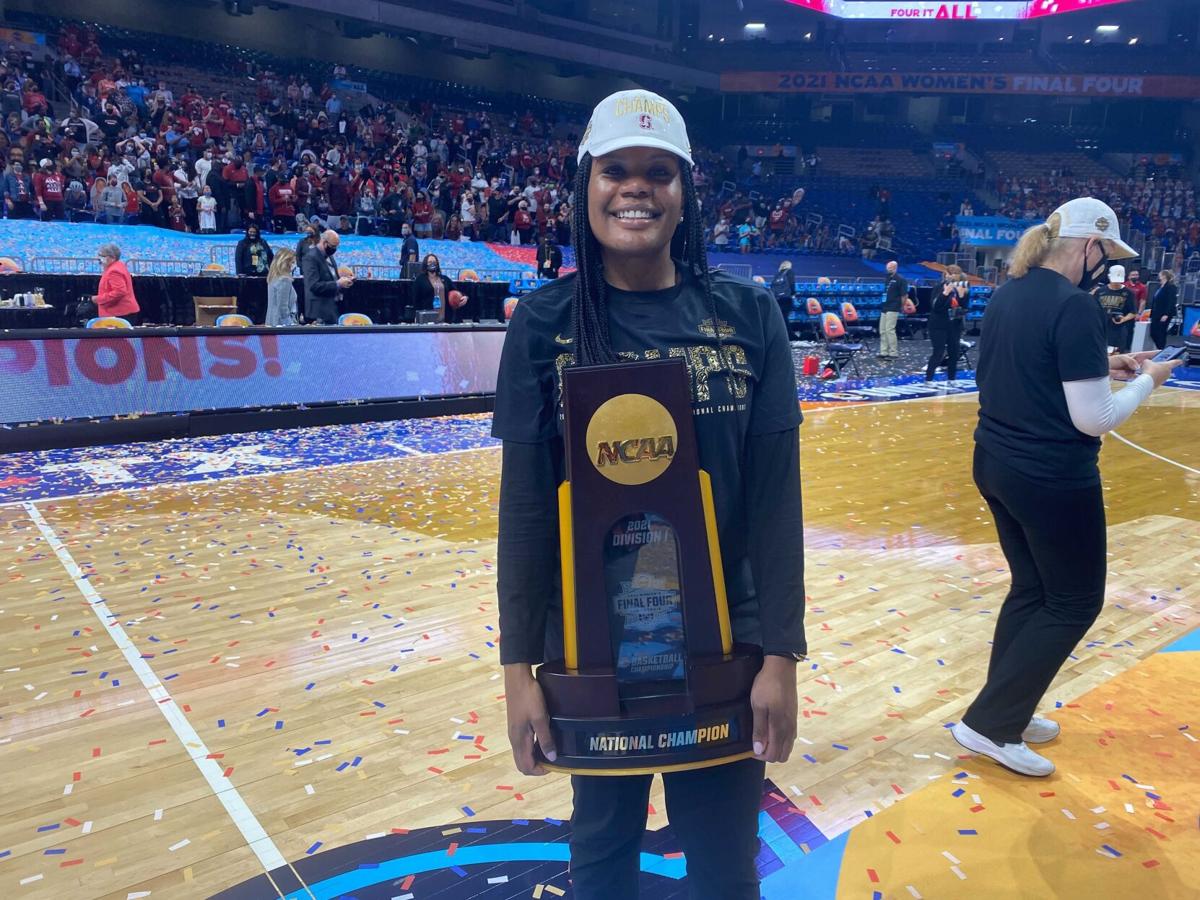 Stanford assistant women’s basketball coach Britney Anderson (left) waves and takes a photo with her phone Monday during a parade on the Stanford campus. 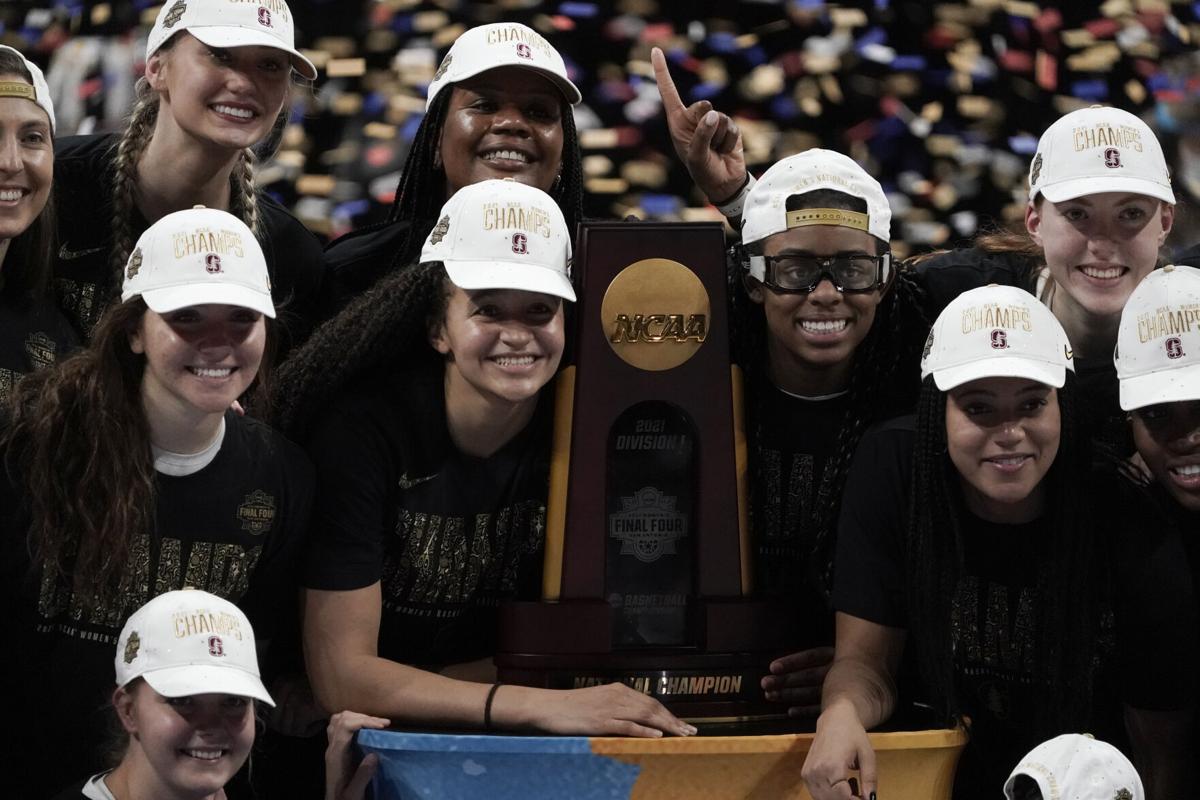 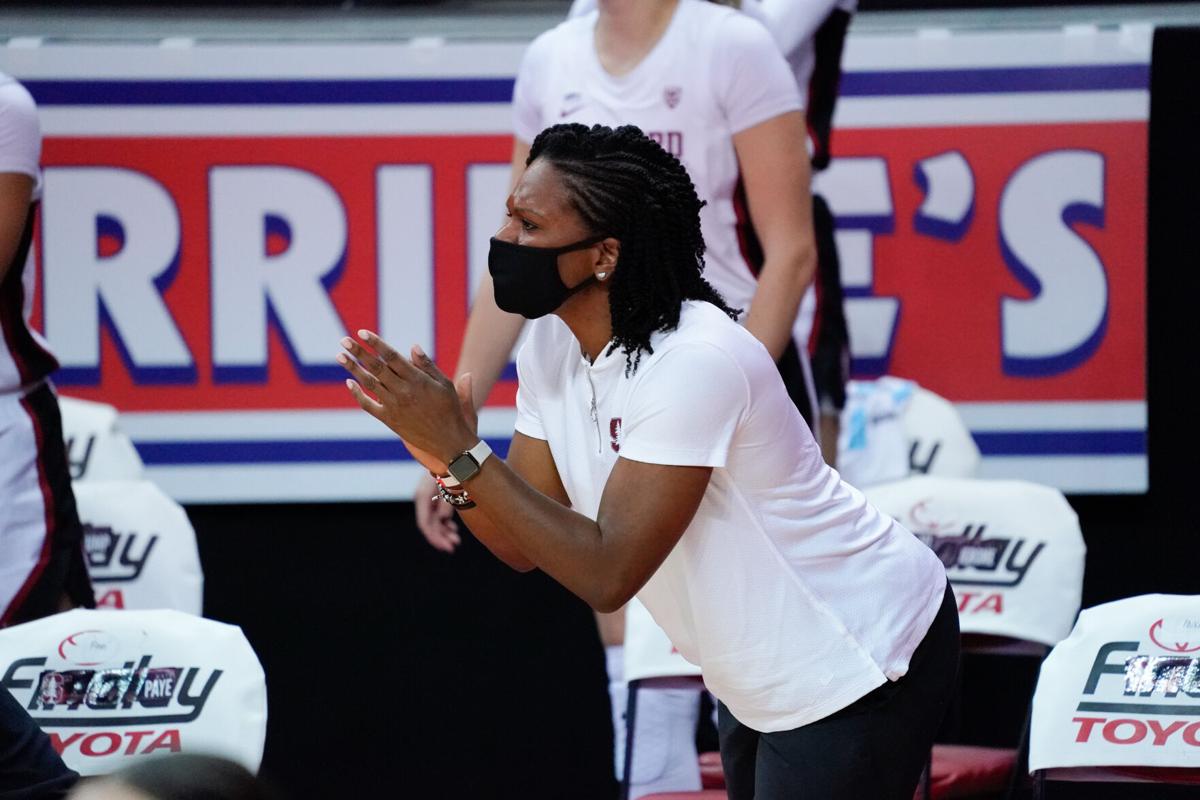 Former Radford and Virginia Tech assistant Britney Anderson won an NCAA championship in her first season as a Stanford assistant.

Stanford assistant Britney Anderson (top row) raises her forefinger in the air as the Stanford players and coaches pose with the NCAA championship trophy Sunday night. 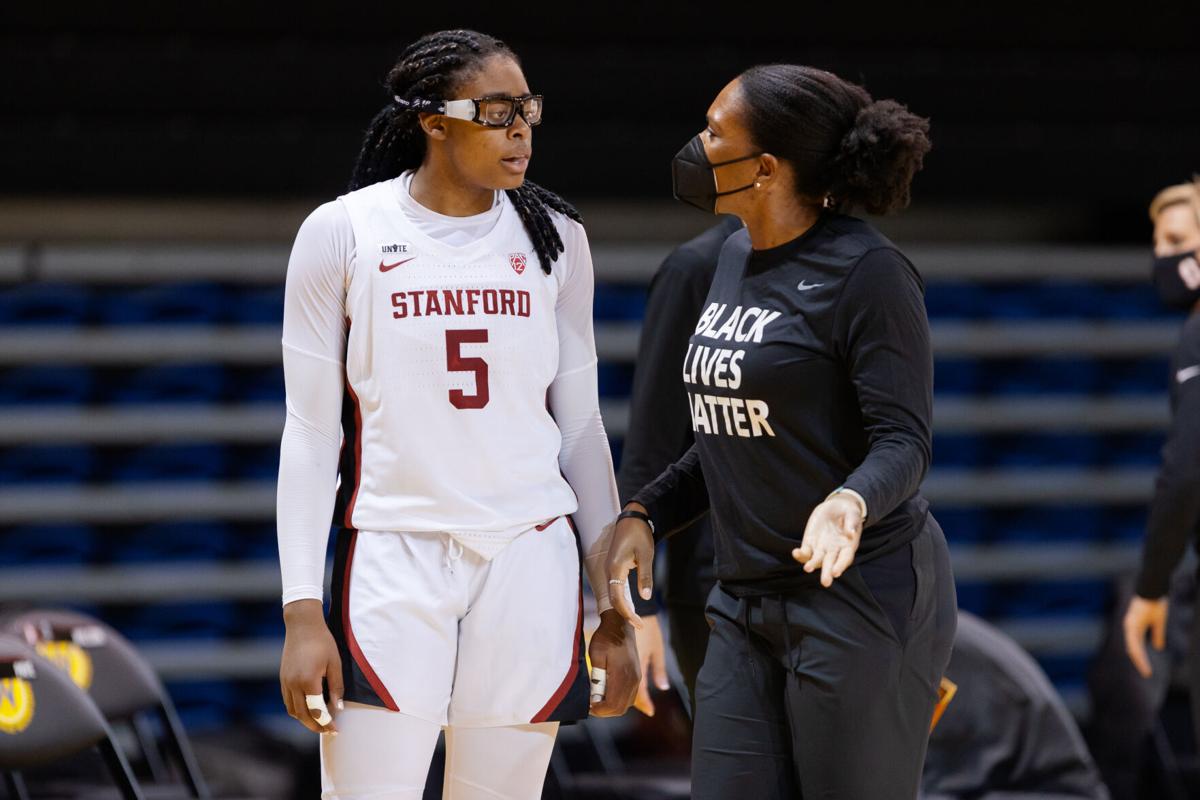 Last summer, Britney Anderson left Blacksburg and drove across the country for a new job in California.

"It's been a whirlwind," Anderson, 36, said Monday night in a phone interview from California. "I've kind of just been in awe [since Sunday]. I've had to kind of pinch myself.

"I'm still kind of stuck in the 'wow factor' setting.

"I haven't slept since the night before we played in the championship."

"After I got hired, she said, 'I think this team can win the national championship,’" Anderson said. "They all believed in it."

Down 54-53, Arizona inbounded the ball with 6.1 seconds left. While being triple-teamed, Aari McDonald put up a jumper that bounced off the rim at the buzzer.

"The last 6.1 seconds lasted forever," Anderson said. "That last shot she shot, and the fact that she got it off over three people, I just felt like everything stopped.

"After she missed it and all of our players started running, I was like, 'Oh my gosh, we won!'

"Seeing our players with their hats on and then I'm having a hat on and then the cutting down of the net, … that moment is something I will cherish forever."

Anderson's parents were in the Alamodome stands Sunday night.

This was the first time Anderson has experienced the NCAAs since 2006, when she was a Tech junior forward making her third straight NCAA tournament appearance.

"When we got to the first-round game [last month], I was like, 'I haven't been here for awhile to do this,’" she said.

Anderson was an assistant last year on a Tech squad that was a safe bet to make the NCAAs for the first time since her junior season. But the 2020 NCAA tournament was canceled because of the coronavirus pandemic. Tech ended that drought this year instead.

"I felt so bad last year," Anderson said. "But I think this makes up for it a little."

The top reserve on that 2019-20 Tech team was Trinity Baptiste, who started for Arizona this year as a graduate transfer.

Anderson consoled Baptiste on the Alamodome court after Stanford beat Arizona for the title.

"I just had to let her know I will always be there for her as a coach," Anderson said.

Stanford made its 13th Final Four appearance Friday, when it edged South Carolina 66-65.

Sunday marked the the third NCAA title that Stanford has won under VanDerveer. She steered the 1996 U.S. Olympic team to a gold medal and has been inducted into the Naismith Memorial Basketball Hall of Fame.

"She has a way of getting these young women to buy into what they're doing," Anderson said. "She coaches them hard."

Because of COVID-19 restrictions in Santa Clara County, California, the Cardinal (31-2) did not play a single home game in December or January. The team spent that time living out of hotels while playing games in Las Vegas; Santa Cruz, California; Arizona; Utah; Colorado; Washington state and elsewhere.

"The team is close," Anderson said. "Once we went on the road, I was like, 'They're going to be sick of being around each other.’ But they … found fun and joy in everything that we did."

So the team had experience living out of a suitcase even before spending the past three weeks in the NCAA tournament bubble in San Antonio.

"We had done it for so long that once we got to that point, we were just kind of like, 'OK, three more weeks, here we go,’" Anderson said.

Anderson coached in the New River Valley for seven straight seasons before taking the Stanford job.

After serving as an assistant to Radford coach Mike McGuire for two seasons, Anderson was hired by then-Hokies coach Dennis Wolff in 2015.

When Brooks succeeded Wolff as Tech’s coach in 2016, he retained Anderson as an assistant.

Joining the Stanford staff was an eye-opening experience for Anderson.

Anderson is not the only one in the Stanford program with Tech ties.

Anderson's coaching career has been a "fun journey" for her.

"I never thought I'd be a national champion."

At Virginia Tech: was part of three NCAA tournament teams and a WNIT team; averaged 10.2 points as senior.

Stanford assistant women’s basketball coach Britney Anderson (left) waves and takes a photo with her phone Monday during a parade on the Stanford campus.

Former Radford and Virginia Tech assistant Britney Anderson won an NCAA championship in her first season as a Stanford assistant.

Stanford assistant Britney Anderson (top row) raises her forefinger in the air as the Stanford players and coaches pose with the NCAA championship trophy Sunday night.