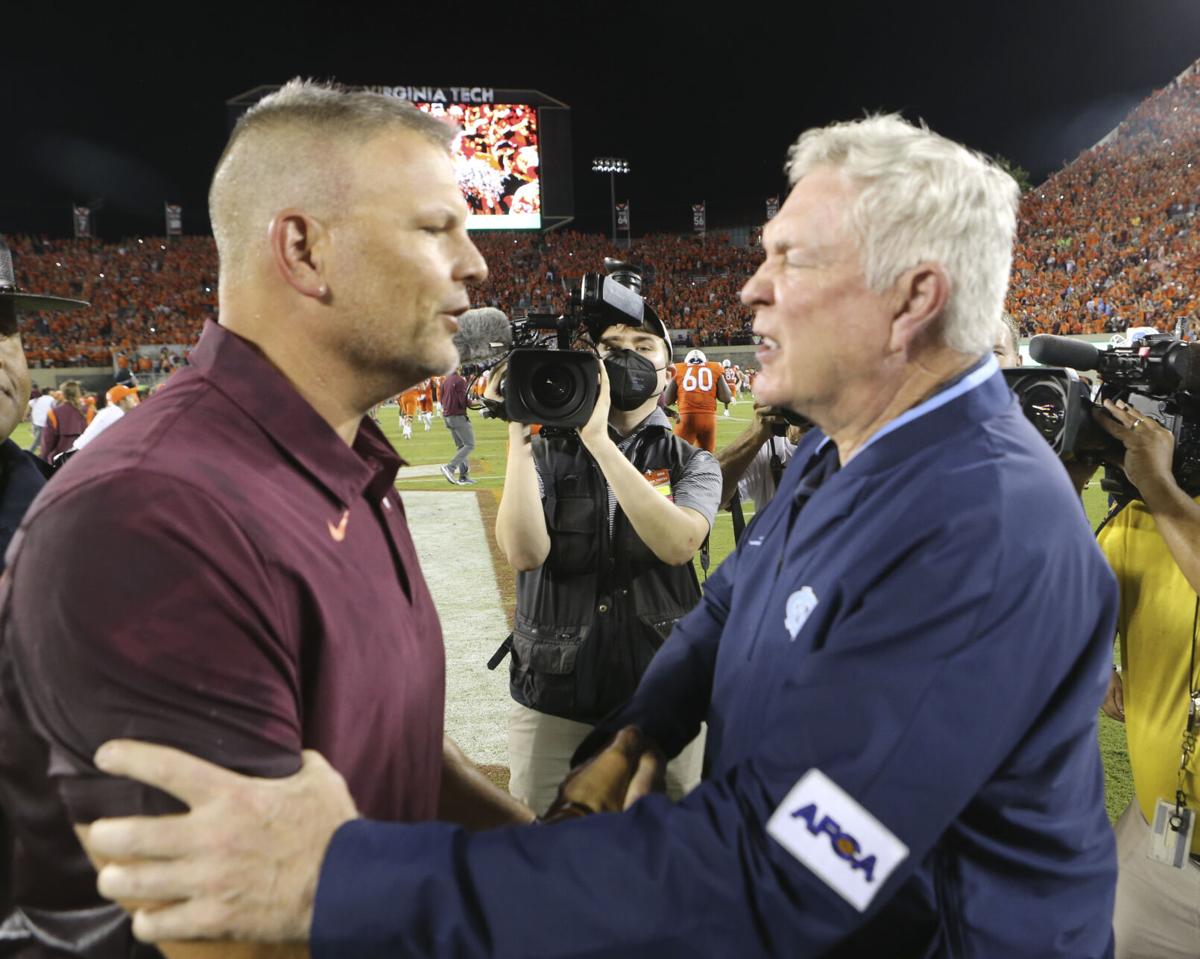 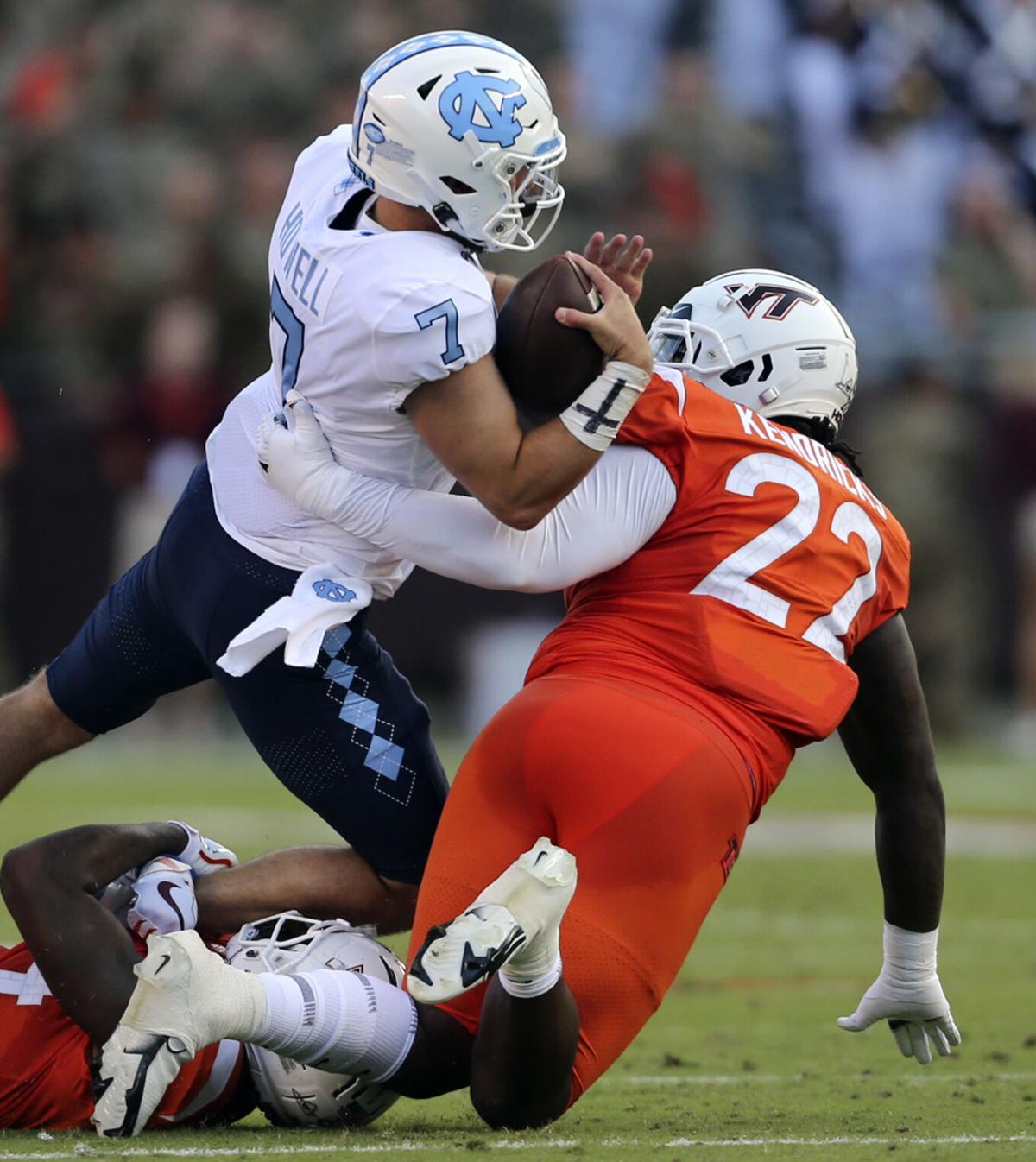 North Carolina quarterback Sam Howell (left) is sacked by Virginia Tech's Chamarri Conner in the first half of the Hokies' win. Howell was sacked six times in the game.

BLACKSBURG — So much for North Carolina being a top-10 team.

But they did not live up to the hype Friday night, falling to Virginia Tech 17-10 at Lane Stadium.

“The shine’s off,” UNC football coach Mack Brown said after the game. “The rating sure doesn’t matter tonight. We were overrated, with the way we played.

“I’ve been a guy that said preseason ratings are not worth anything but getting you in trouble. … I don’t like them. I wish the ratings wouldn’t come out until the College Football Playoff ratings in October. But that doesn’t matter. It happens. So that’s all out of the way. Like I said, our shine’s off.”

UNC quarterback Sam Howell had said in July that the Tar Heels had not been “that championship level of team” but have a chance this year to “take that next step.”

Friday showed that UNC still has work to do to reach that level.

“We won’t let this one game define our season,” Howell said after the loss. “It sucks, but we’ve just got to keep getting better.

“I’ve got to get better, personally. There’s a lot of things I could’ve done better in tonight’s game. And I’m going to get better. My team deserves better from me.”

Howell entered the season as a Heisman Trophy candidate, but he completed just 17 of 32 passes for 208 yards and one touchdown with three interceptions.

“At times I was getting frustrated and I was just trying to do too much,” Howell said. “They were doing a good job on defense. … I was pressing a little bit, just trying to make a play, and I ended up putting my team in a bad position.”

UNC was picked to win the Coastal Division in the ACC’s preseason media poll.

Had Brown been privately concerned about replacing those four in the opener?

“I was really concerned,” Brown said. “Those guys were really, really good. They weren’t as good the first year as they were last year. And we’re kind of back to the unknowns of the first year, like we were two years ago, because Dyami and Dazz and Javonte and Michael came so far over the two-year period.

“So these guys just have to come faster. But when you play a really good team in an opener on the road with that environment, you’re going to find out every concern you’ve got. And those were exposed tonight.”

Howell’s offensive line did not impress, either. Howell was sacked six times, while UNC ran for just 146 yards.

“It looked like we got beat [up front],” Brown said. “It was really, really disappointing that we didn’t run the ball better the first half, and I did think the sacks were a surprise and disappointing. … When you don’t run the ball well and you have six sacks and he had to run for his life [on] some others, … we’ve got to do a better job protecting him.”

Tech led UNC 14-0 at halftime. The Tar Heels had the ball for just nine minutes and 11 seconds in the first half.

“We didn’t play well the first half in really any phase,” Brown said. “We didn’t have the ball very much. When we did, we didn’t move it.

“They made yards on first down, which we couldn’t let them do. … They came out with a lot of different motions and shifts and got us on our heels in the first half.”

The Hokies beat UNC for the fifth time in the last six years.

“They played harder than us,” Howell said. “They really dominated us all night long.”

“Tech’s got good players,” Brown said. “I told [the Tar Heels] … these guys were going to be pumped — ‘They’re tired of reading how great you are, how well we’re doing in recruiting.’”

Hot Or Not: Justin Fields will be next rookie QB to get first career win?

North Carolina quarterback Sam Howell (left) is sacked by Virginia Tech's Chamarri Conner in the first half of the Hokies' win. Howell was sacked six times in the game.