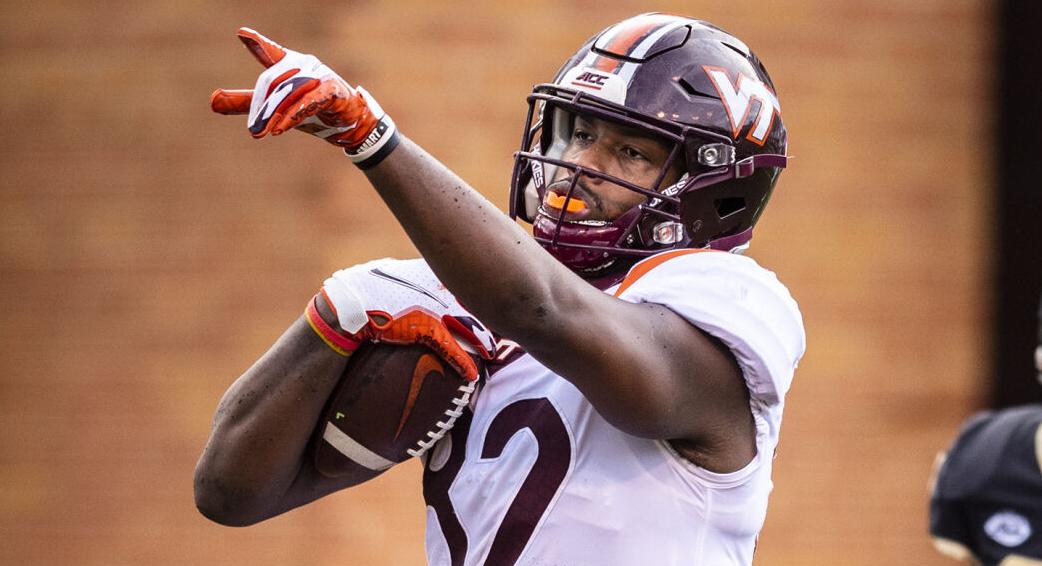 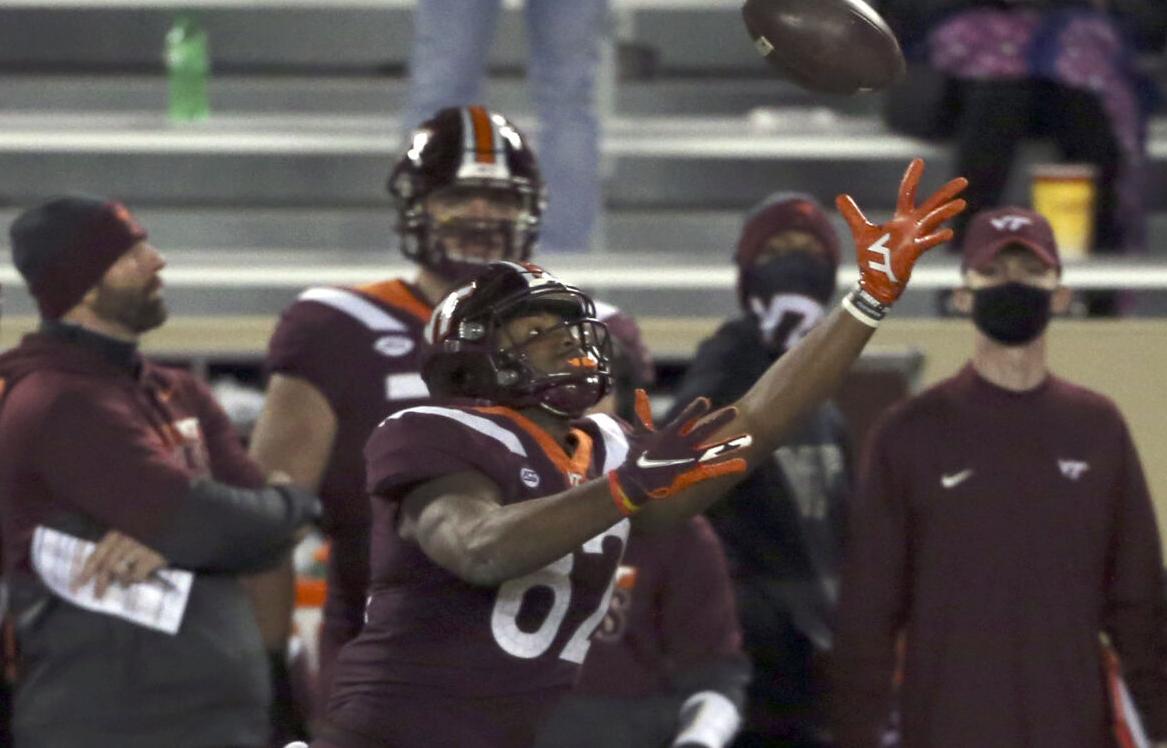 Virginia Tech’s James Mitchell makes a one-handed catch in the second half of the Hokies’ Dec. 13 victory over UVa. 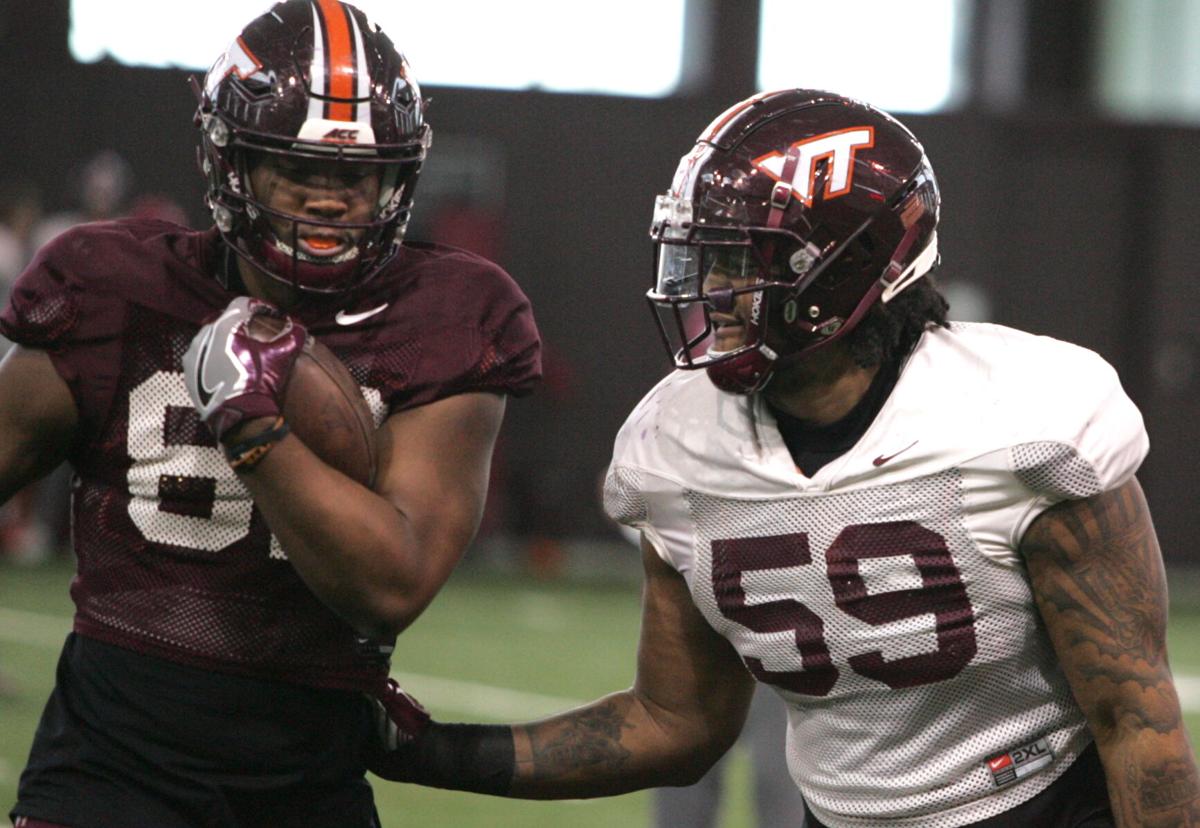 His parents met at a small-town church in Southwest Virginia.

That seems fitting, given that James Mitchell has so many choir boy qualities.

The Virginia Tech tight end was a straight-A student in high school. He’s on track to earn his degree in sports media and analytics in December. He’s a brilliant player, an NFL prospect who can line up all over the offensive formation. He’s a quiet worker who has the respect of everybody on the team.

“It’s a little bit like Divine Deablo, quite honestly,” Tech coach Justin Fuente said at the ACC Football Kickoff in Charlotte. “He’s a kid who does everything you ask him to do, makes great grades, graduates, all that sort of stuff. He doesn’t go act the fool.

“You just want him to make other people act like him.”

Mitchell’s trying. He admits that vocal leadership doesn’t come naturally to him. In that respect, he’s a lot like his mother, Marcia, who played Ivy League basketball at Brown. She’ll open up once you get to know her, Mitchell said, but not until then.

Entering his fourth season at Tech, Mitchell is ready to open up.

“It’s definitely something I need to start doing, encouraging my teammates all the time,” he said. “Because it’s going to get hard, especially with fall camp coming up. People are going to get discouraged. That’s just the ups and downs of college football.

“Hopefully I can be that sort of light for them, just tell them that we’ve all been through it, you’ve just got to push through it.”

Mitchell, who earned second-team All-ACC honors last season from Pro Football Focus, could have put his name in the NFL Draft after last season. He announced in December that he would be returning to Blacksburg — a huge boon for Tech’s offense.

The NFL remains the goal. Draft advisers told him they wanted to see him improve his in-line blocking. Mitchell packed on eight pounds over the offseason — he now checks in at 6-foot-3, 255 pounds — in that pursuit.

“When I’m down there against defensive ends, they wanted to see a little bit more success in that area,” Mitchell said. “Also separation in my routes, a little bit of route running. Both things I think I can and will get better at.”

Fuente has no doubt Mitchell will be productive. What the coach wants to see is the leadership continue to evolve.

Mitchell has been taking the lead with his position group during player-run workouts this summer.

“He’s continuing to become comfortable with that,” Fuente said. “I start off with this: I say, ‘James, you have no idea what a tap on the butt or a pat on the shoulder means for a player from a guy like you. You just don’t get it, because you don’t see it, right? I don’t expect you to see it.

“You don’t think of yourself that way, and if you just started with that, that’s leadership. And then you can get into in your own way helping a guy who’s struggling or whatever. But if you just start with some encouragement, you have no clue how much that means to some of these guys.’”

Mitchell, who grew up in Big Stone Gap and starred at Union High, retains a lot of the small-town qualities that molded him. The son of a pastor at a non-denominational church, he aims to make his Wise County hometown proud.

“I would describe it as a smaller version of Blacksburg,” he said. “When it’s football season, you’re going to know it. Southwest Virginia is big on football. It’s an everybody-knows-everybody type of place.”

And everybody knows the potential he has to make an impact this fall. Choir boy qualities aside, Mitchell has a classic football goal in mind for 2021.

“The experience is there. It’s time to take everything I’ve learned from each season and take that into each week, just try to be the best player on the field at all times.”

Are the Green Bay Packers pretenders?

“We’ve got huge improvement to make,” coach Justin Fuente said of an offense he labeled as “inconsistent.”

McFarling: For the Hokies, spring has sprung in September

The coaching decisions were questionable, some of the play was outstanding, but much of the Virginia Tech approach on Saturday was lackluster.

Virginia Tech’s James Mitchell makes a one-handed catch in the second half of the Hokies’ Dec. 13 victory over UVa.