Subscribe
Read Today's E-edition
Share This
Mike Young says he 'could feel' effect of layoff in Virginia Tech loss to N.C. State
0 Comments
Share this
1 of 7 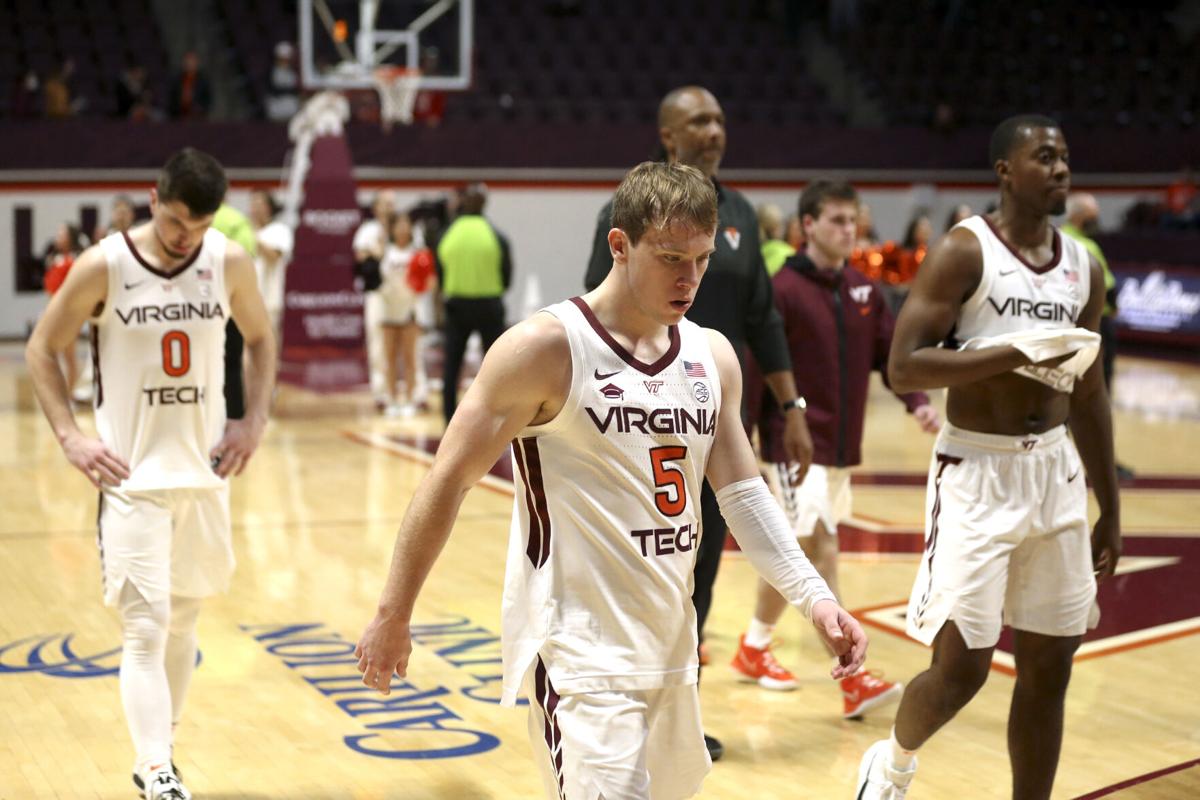 Virginia Tech’s Hunter Cattoor (from left), Storm Murphy and Nahiem Alleyne leave the floor after Tuesday’s loss to N.C. State. The Hokies fell to 0-3 in the ACC. 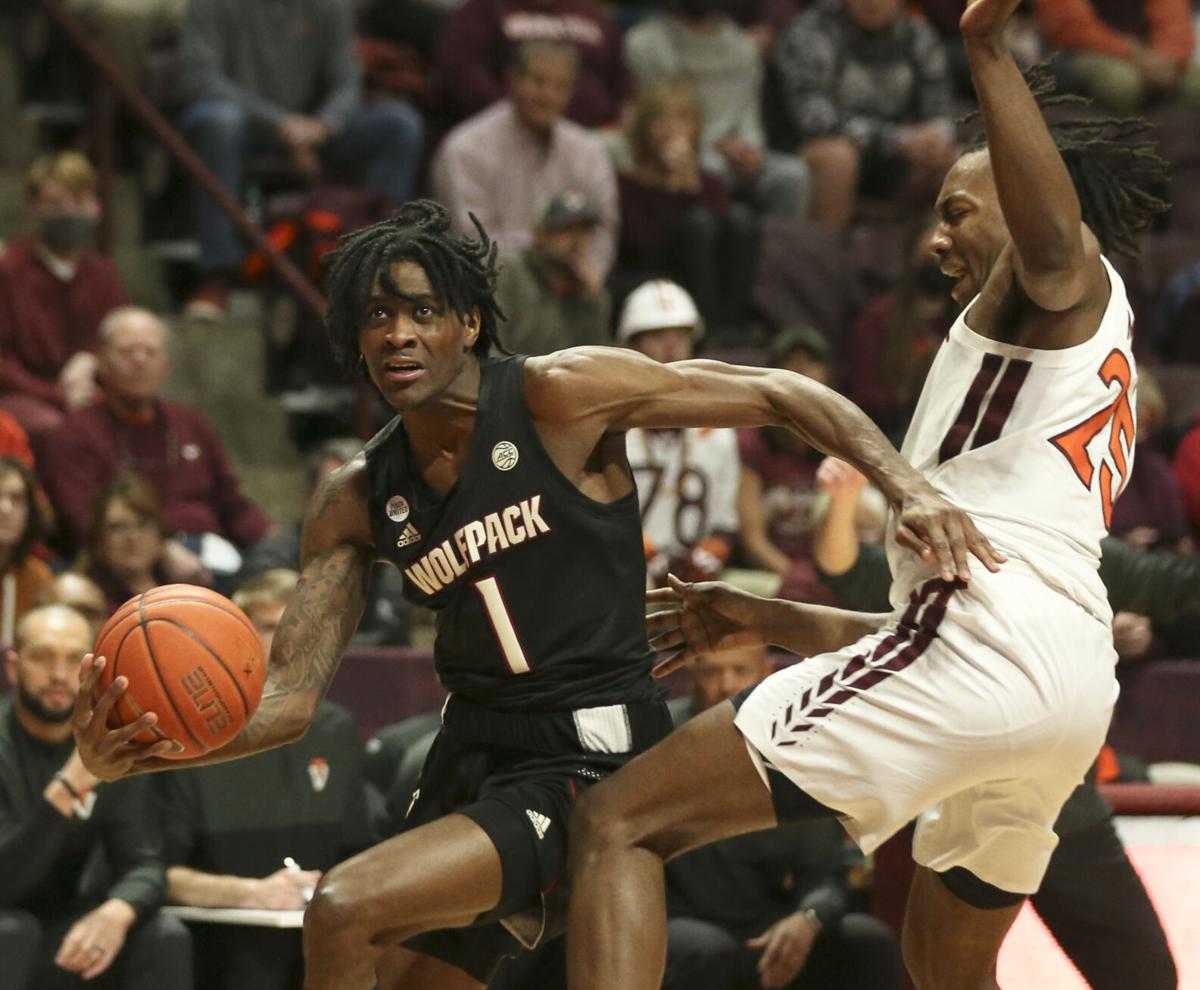 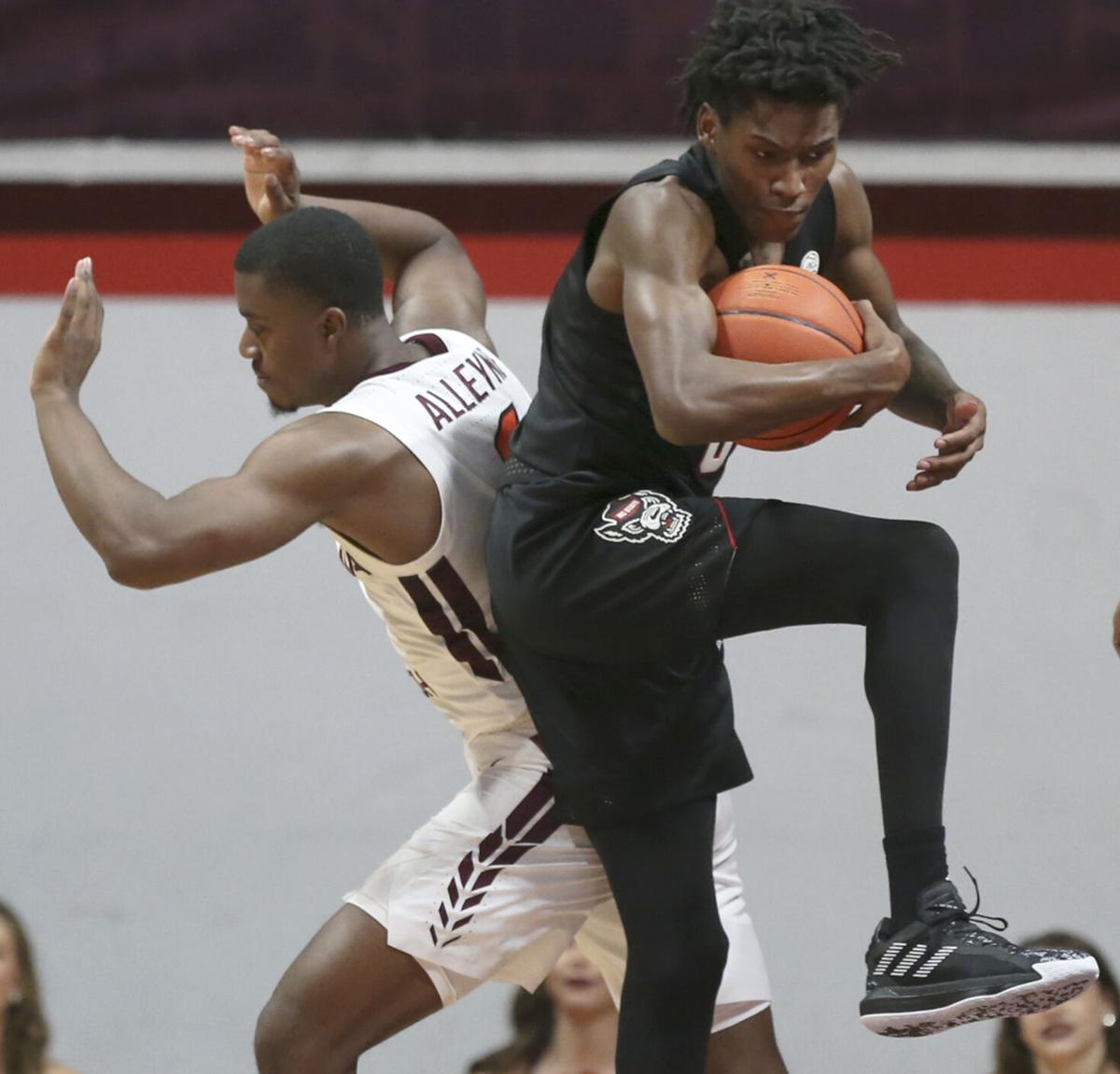 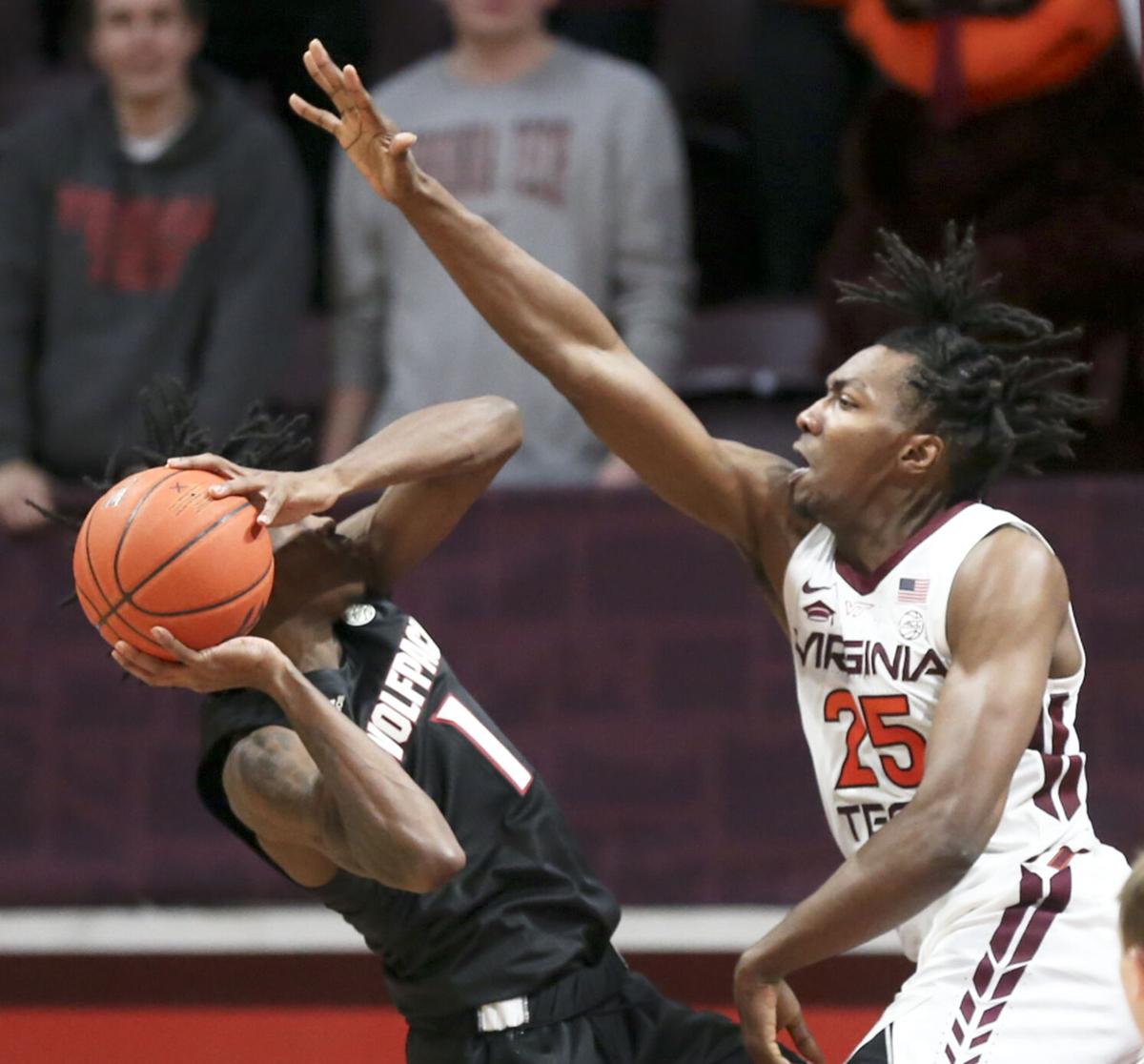 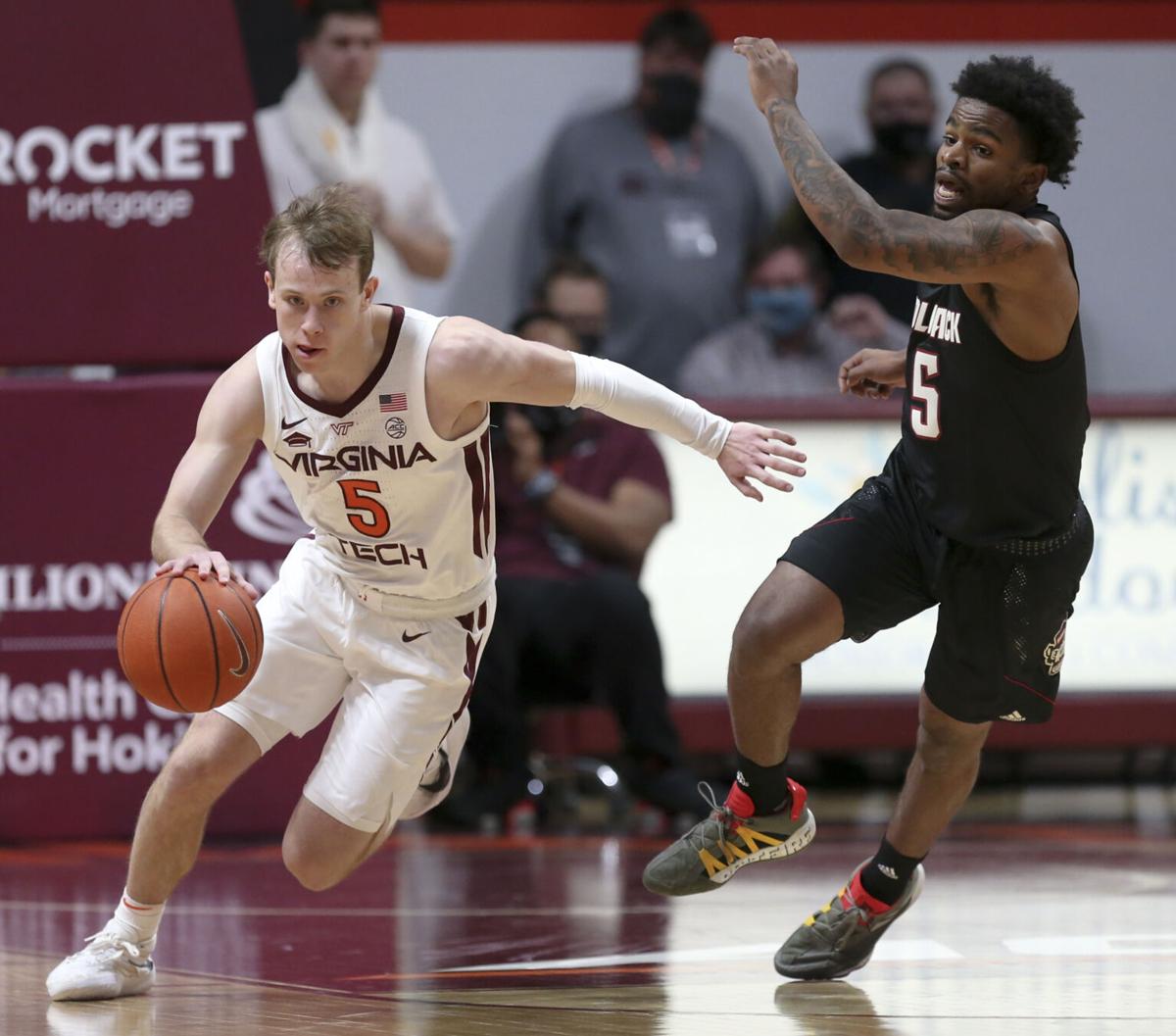 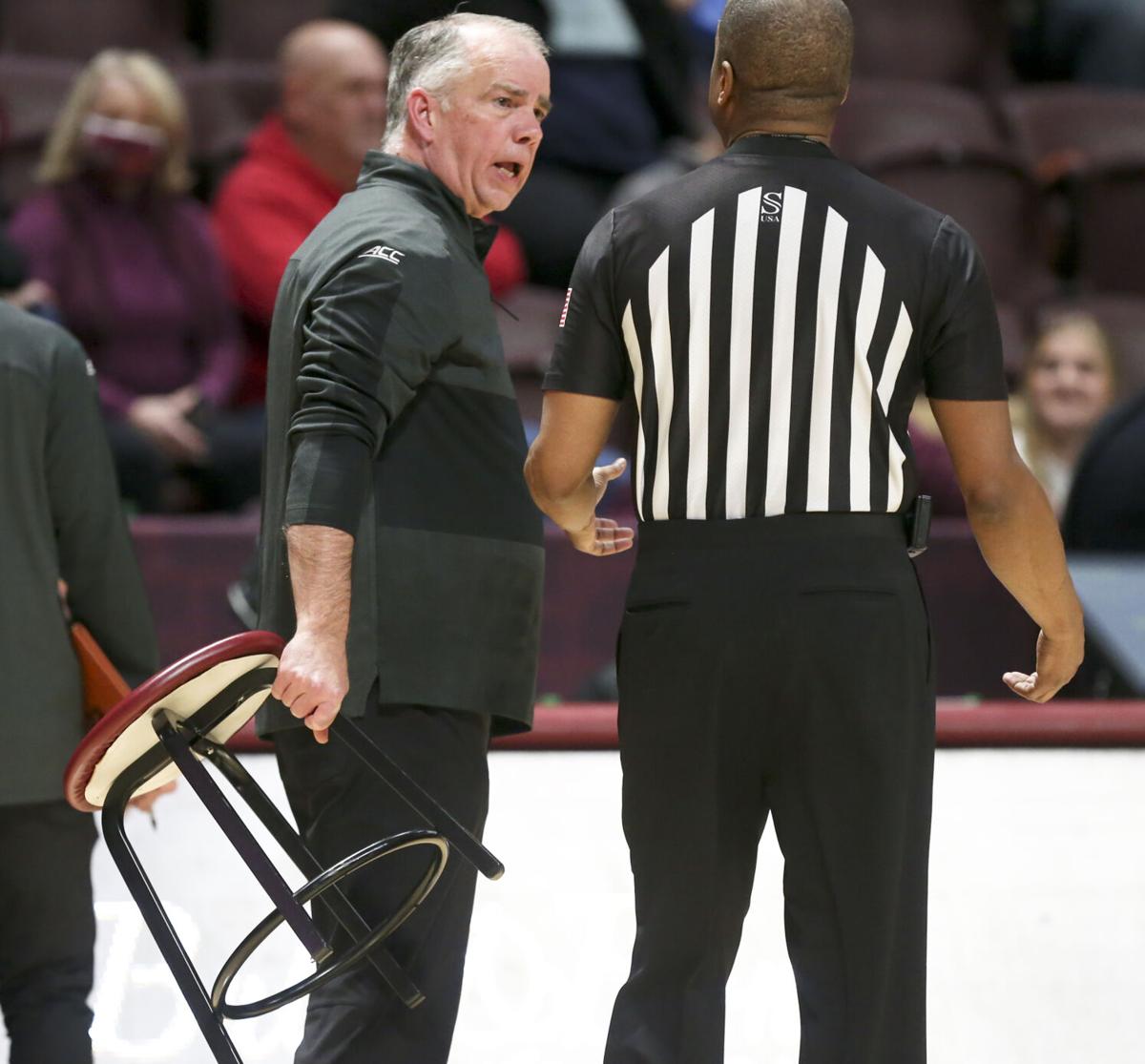 Virginia Tech coach Mike Young talks to an official after a timeout in the second half of the Hokies’ home loss to North Carolina State. Tech returned to action Tuesday after having gone 12 straight days without playing a game. 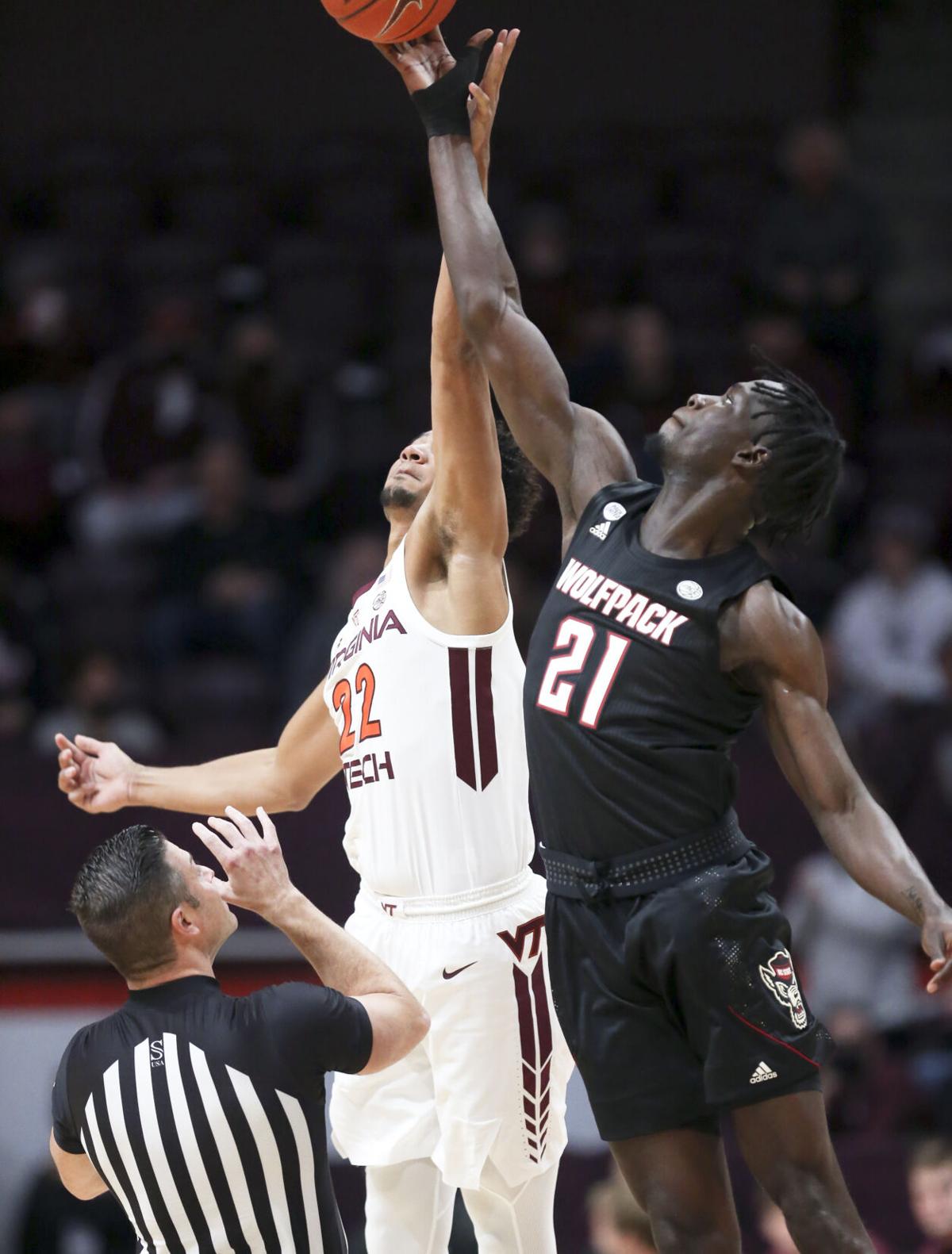 BLACKSBURG — The Virginia Tech men’s basketball team had all of its players available for Tuesday’s game, but that does not mean the Hokies were back to their normal selves.

After going 12 straight days without playing a game because of COVID-19 woes on the team, the Hokies returned to action with a 68-63 loss to North Carolina State at Cassell Coliseum.

Did rust and fatigue play a factor in the defeat?

“It did, considerably,” Tech coach Mike Young said after the loss. “I don’t want to detract from N.C. State’s effort. … But I could feel it.

“Our quickness to the ball was lacking, and it was evident. And they were giving me everything they had in their tank.

“Our work on the glass, where we’ve been pretty darn good throughout, was just — they were quicker around the hole than we were.

“It makes it really hard. Talked to so many friends in coaching that have gone through the same thing, and your readiness for competition in a game of this level is of great concern.”

Virginia Tech (8-6, 0-3 ACC), which had not played since a Dec. 22 loss at Duke, had to postpone last week’s games against North Carolina and Pittsburgh because Tech was in COVID-19 protocols. Young had said Monday that some of his players had tested positive for COVID-19 after returning to campus Christmas weekend, but he had refused to give a specific number.

Young said after the loss that several players did not rejoin the team until Monday.

“We had [only] five in practice there for a bit,” Young said after the game. “We got nicked up in a big way with … COVID.”

The players who tested positive had to isolate and thus were not able to participate in practice or even have individual workouts during that isolation time.

“[The concern was] being on the shelf for that long and without the physicality and without just the day-to-day sharpness that you’ve got to have to compete,” Young said.

Did the Hokies run out of gas?

“State played better down the stretch than we did,” Young said. “But … when you’re in your apartment or dorm room for that length of time and you get guys back the day before the game, you knew it was going to be hard. Just hoped like crazy we could muster enough plays and the right stuff to win.”

“Just a little quicker to the ball,” Young said. “I don’t want to use any excuse pertaining to being off.”

To try to prevent fatigue, Young inserted three subs in the first five minutes of the game. The starters wound up playing 28-37 minutes, with the three reserves playing 11 minutes apiece.

“It’s pretty obvious why we substituted more liberally early in the game. I’m trying to preserve some guys that [were] eating honey buns and sitting on their couch playing Nintendo … for the last week and a half,” Young said.

Keve Aluma, who had 18 points in 33 minutes, and Storm Murphy, who had 14 points and five assists in 28 minutes, each refused to say after the loss if he had been among those who had tested positive.

“A number of us had it. … Bottom line is, N.C. State outplayed us,” Murphy said.

Young said guard Nahiem Alleyne was not among the Hokies who were in a COVID-19 pause.

Nevertheless, Alleyne remains in a shooting slump. He was 2 of 11 from the field Tuesday, including 1 of 7 from the 3-point line.

“I’m looking to get him the ball any time I can,” Murphy said. “There’s just an unbelievable amount of belief in the kid.”

Alleyne played 30 minutes Tuesday, including all but two minutes in the second half. During State’s decisive 8-0 run, he shot an air ball on a 3-point attempt with 1:58 to go.

“You’re going to play those that you feel give you the best opportunity to [win]. … I’ve seen Nahiem Alleyne get us out of tight spots,” Young said. “That’s the confidence level that he has earned.”

The good news for Tech is it is not scheduled to play again until next Wednesday’s visit to Virginia. So the Hokies have time to return to their old selves.

“That’s good for us to be able to get back to us and get everybody back jelled together,” Aluma said.

“Now we’ve got an opportunity to get everything back together — our conditioning, get back in the weight room,” Young said. “Get our timing squared away — we missed some shots.”

Virginia Tech’s Hunter Cattoor (from left), Storm Murphy and Nahiem Alleyne leave the floor after Tuesday’s loss to N.C. State. The Hokies fell to 0-3 in the ACC.

Virginia Tech coach Mike Young talks to an official after a timeout in the second half of the Hokies’ home loss to North Carolina State. Tech returned to action Tuesday after having gone 12 straight days without playing a game.