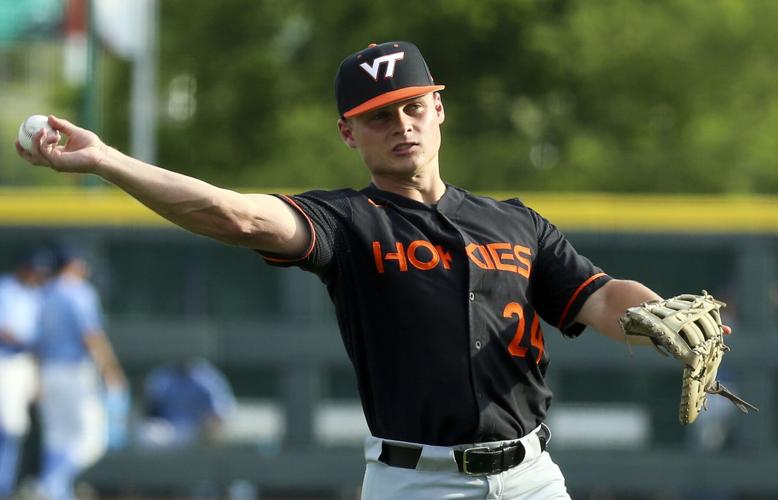 Nick Biddison has started all 56 games for Virginia Tech this year, including 35 in right field and 15 at first base. The senior made the All-ACC third team. 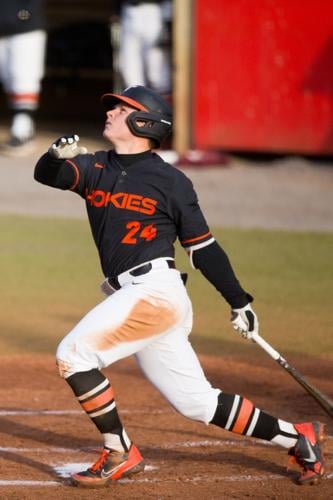 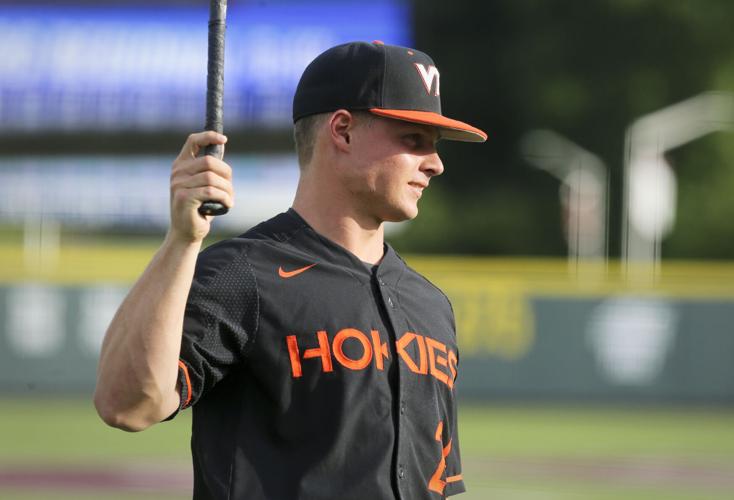 Nick Biddison is the leadoff batter for the Virginia Tech baseball team. He made the All-ACC third team, as well as the all-regional team for the Blacksburg Regional. 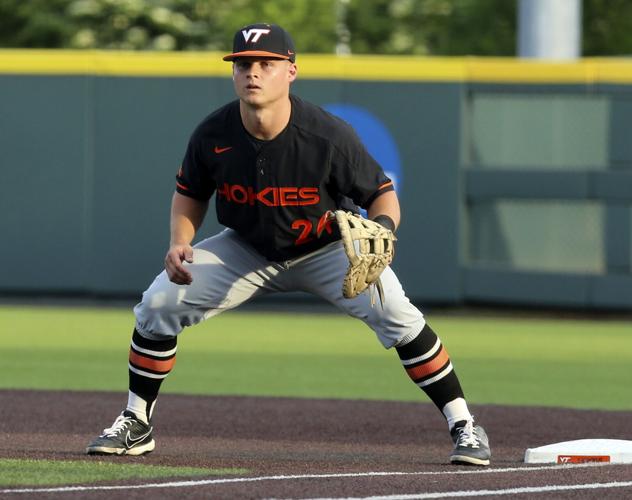 Nick Biddison played first base for Virginia Tech in the final two games of the Blacksburg Regional after playing right field for the first game of the regional. 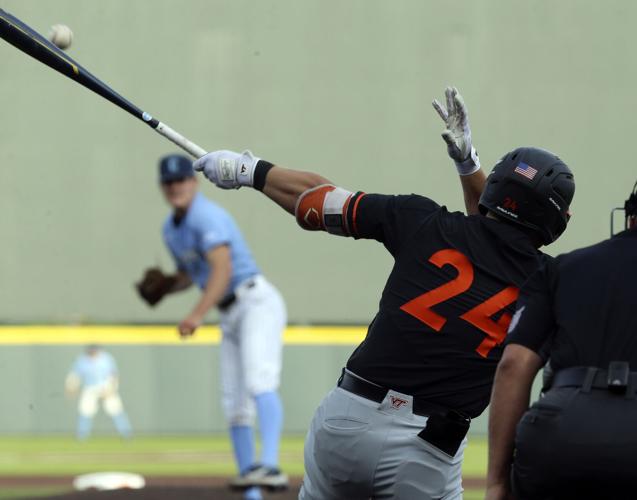 Nick Biddison went 5 for 5 in the first game of the Blacksburg Regional, hit a two-run, inside-the-park homer in the second game and had a homer and an RBI triple in the third game.

BLACKSBURG — Nick Biddison could have turned pro last summer, but he decided to remain with the Virginia Tech baseball team.

And now the senior right fielder/first baseman is a part of the first Virginia Tech squad to advance to the NCAA Super Regionals.

“I could’ve been drafted. To me, it was the best fit for me to come back, which I’m very glad I did,” he said after practice this week.

The All-ACC third-team pick is batting .353 with 14 doubles, three triples, 12 homers, 45 RBIs, 63 runs scored and a team-high 21 stolen bases. He helped the Hokies (44-12) win their regional last weekend, earning a spot on the all-regional team for the Blacksburg Regional.

It’s a good thing he stuck around.

Biddison said a couple teams were interested in drafting him last summer, but he declined the opportunity.

“You come up with a [monetary] number and you come up with what you think is right for you to leave, and I didn’t get the number I wanted,” he said. “It just meant more to come back and do more with this program because I still had a very salty taste in my mouth. I was dead set if I didn’t get ‘X’ amount I was going to come back because I wasn’t really satisfied with the year we had last year.”

“We thought we were going to do really well and make a deep run in the postseason, and we didn’t. So I felt like there was some unfinished business that I had,” he said.

Biddison hopes he will be turning pro this summer.

The major league amateur draft will be held next month. A major league scout who asked to remain anonymous said Biddison could be taken during Rounds 8-12 of the 20-round draft.

“He’s a true-blue baseball player,” the scout said. “He’s been asked to do a lot of things on that team, and he might not be the highest-profile player, but seems to be the guy that makes their offense go.”

Biddison grew up in Henrico County in suburban Richmond.

He began his high school career playing shortstop for St. Christopher’s School in Richmond, then was moved to catcher for his final two years there.

He played the outfield for his Richmond-based travel-ball team — a team that also included current Hokies Tanner Schobel and Carson Jones.

Biddison verbally committed to North Carolina in the fall of his sophomore year of high school.

But in the fall of 2017, when Biddison was in his senior year of high school, UNC called to say it no longer had a spot for him.

“It definitely sucked,” Biddison said. “You’re shocked. But I’m always a firm believer that everything happens for a reason.

John Szefc had been hired as Tech’s coach in June 2017, and plucked Elbin off the VCU staff. Biddison knew Elbin from Elbin’s VCU stint, so he told Elbin he needed to find a new place to play college baseball.

Tech happened to have a camp coming up that weekend, so Biddison and his mother headed to Blacksburg. Biddison verbally committed to Tech that same weekend.

“I just kind of didn’t want to go through all that [recruiting process] again,” he said. “I saw the bad parts of recruiting and how it could be and I just didn’t want to do that. I wanted to go somewhere right away where the coaches wanted me. And Tech seemed like they were really adamant about having me here, so right away I knew.”

Biddison started 52 games for Tech as a freshman in 2019, when he hit .281. He started at five positions, mainly in center field and at catcher.

He hit .344 during the abbreviated 2020 season. He started all 16 games, mainly at second base and in left field.

Biddison underwent surgery on his left shoulder in the fall of 2020 to repair a torn labrum. So he did not make his 2021 season debut until April of that year. He started 26 games, playing second base and in the outfield.

“Sitting out for six months [hurt]. Baseball’s a hard game. That’s why people have spring training,” he said. “I had about two weeks of taking live at-bats and seeing pitching [in practice] and then [went] right in the mix.

“My body just kind of felt out of sync.”

He played last summer in the Cape Cod League, the most prestigious summer circuit for college players. But he hit just .147.

Last fall, he and the Tech staff watched video of him and analyzed his swing.

“Once the season came around, I felt ready,” he said. “I felt more comfortable again.

“It was really just getting my rhythm back and being aggressive.”

He has shined as the team’s leadoff hitter, with Gavin Cross, Schobel, Jack Hurley and Cade Hunter batting second through fifth.

“He’s hitting in front of three primo guys [Cross, Schobel and Hunter], guys that are probably going to be top-five-rounders [in this year’s draft] … and he’s pretty consistently had a good, solid year, … getting on base a lot, really kind of setting the table for those guys to drive him in,” Szefc said.

Biddison went 5 for 5 in the regional win over Wright State last Friday, with one RBI, four runs scored and three stolen bases.

“He can impact you in multiple ways — foot speed, power, contact skills,” the major league scout said. “He’s a guy that deserves the chance to go out and play at the next level.

“He’s got good bat speed. He’s athletic. … He does everything right.

“He’s the kick-starter to that offense.”

In the win over Wright State, Biddison stole home on a delayed double steal in the second inning. He stole second and third in the seventh inning.

“You just pick up on things,” he said. “With the steal of third, I had the red light. … But my baseball instinct took over. I saw something. … I thought I could get to third.”

In Saturday’s win over Columbia, Biddison had a two-run, inside-the-park homer when the Columbia left fielder lost Biddison’s fly ball in the lights.

“Once you sat down, you’re out of breath. But the atmosphere, the energy when that happens, I could’ve kept going around the bases a couple more times,” he said.

In Sunday’s win over Columbia in the regional final, Biddison belted the normal kind of homer. He also had an RBI triple.

The final out of the regional final was a grounder to the first baseman — Biddison. The team ran over and mobbed him, putting him at the bottom of the celebratory dogpile.

“Nothing’s going to beat that dogpile,” he said. “That’s what we worked that hard for, is for moments like that, to know that you finally won a championship.

“Thankfully, my upper body wasn’t [on the bottom of the pile], it was more just my lower body. But I had probably who knows how many thousands of pounds on my legs.

Biddison has been seeing action at first base of late so Szefc can start the hot-hitting Jones in right field.

The scout said Biddison will probably play in the outfield in pro ball.

Biddison graduated last month with a bachelor’s degree in communications. He and his family took part in the team’s senior day ceremony that same weekend.

Biddison does have an extra year of eligibility, which the NCAA granted all 2020-21 Division I spring-sports athletes because of the coronavirus pandemic. But he has not talked with Szefc about using it next year.

“I think that I’m good enough,” he said. “What I’ve done on the field, I think that I’ve put together a pretty good resume. Hopefully there’s a team that likes it.”

But the draft is not until next month. Biddison and the Hokies are two wins away from the College World Series.

“What’s more important to me right now is … continuing this postseason run,” he said. “That’s more special than anything.”

Nick Biddison has started all 56 games for Virginia Tech this year, including 35 in right field and 15 at first base. The senior made the All-ACC third team.

Nick Biddison is the leadoff batter for the Virginia Tech baseball team. He made the All-ACC third team, as well as the all-regional team for the Blacksburg Regional.

Nick Biddison played first base for Virginia Tech in the final two games of the Blacksburg Regional after playing right field for the first game of the regional.

Nick Biddison went 5 for 5 in the first game of the Blacksburg Regional, hit a two-run, inside-the-park homer in the second game and had a homer and an RBI triple in the third game.