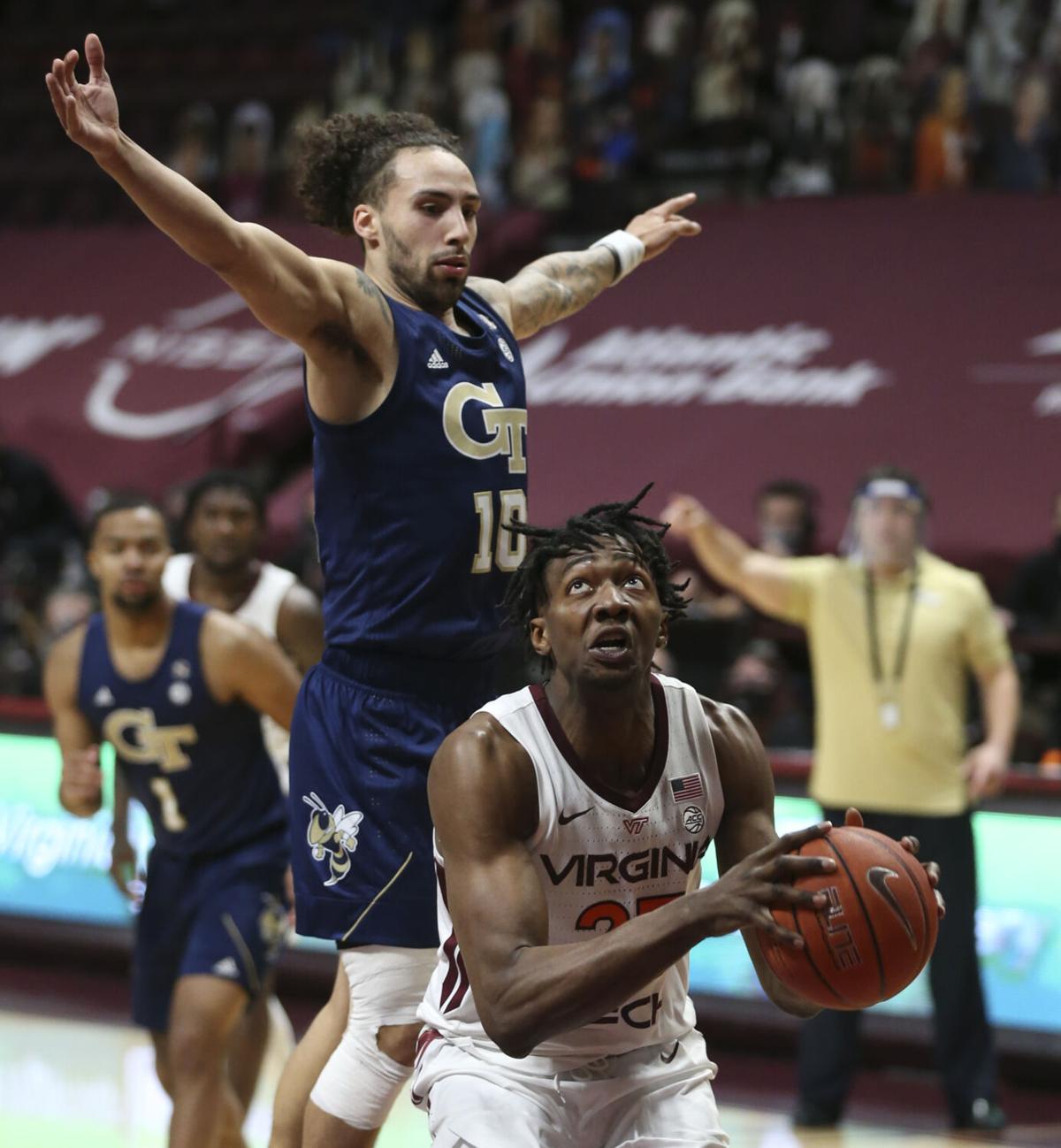 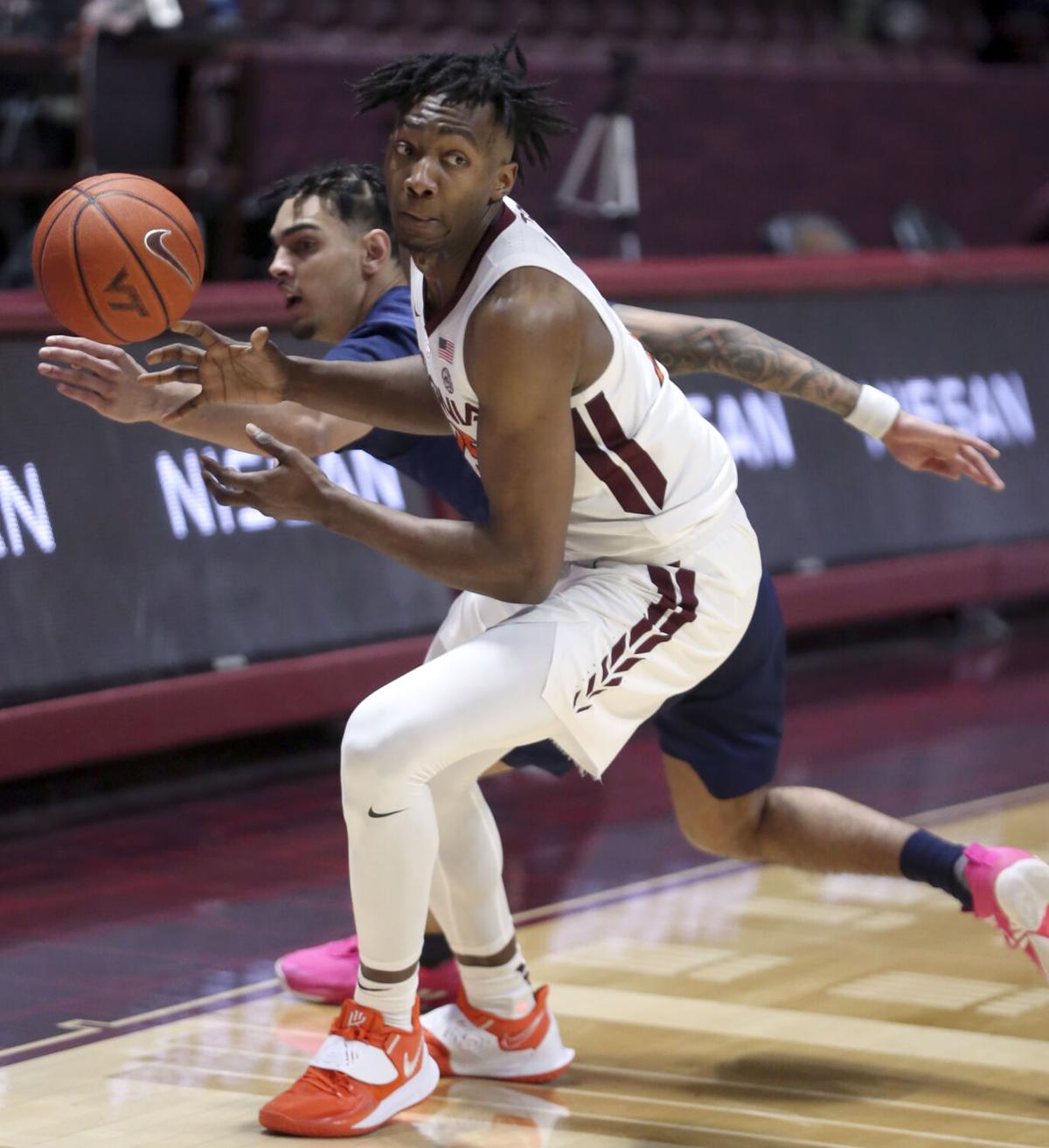 Virginia Tech's Justyn Mutts (25) has the ball tipped from him by Georgia Tech's Michael Devoe (0) in the Hokies' loss. 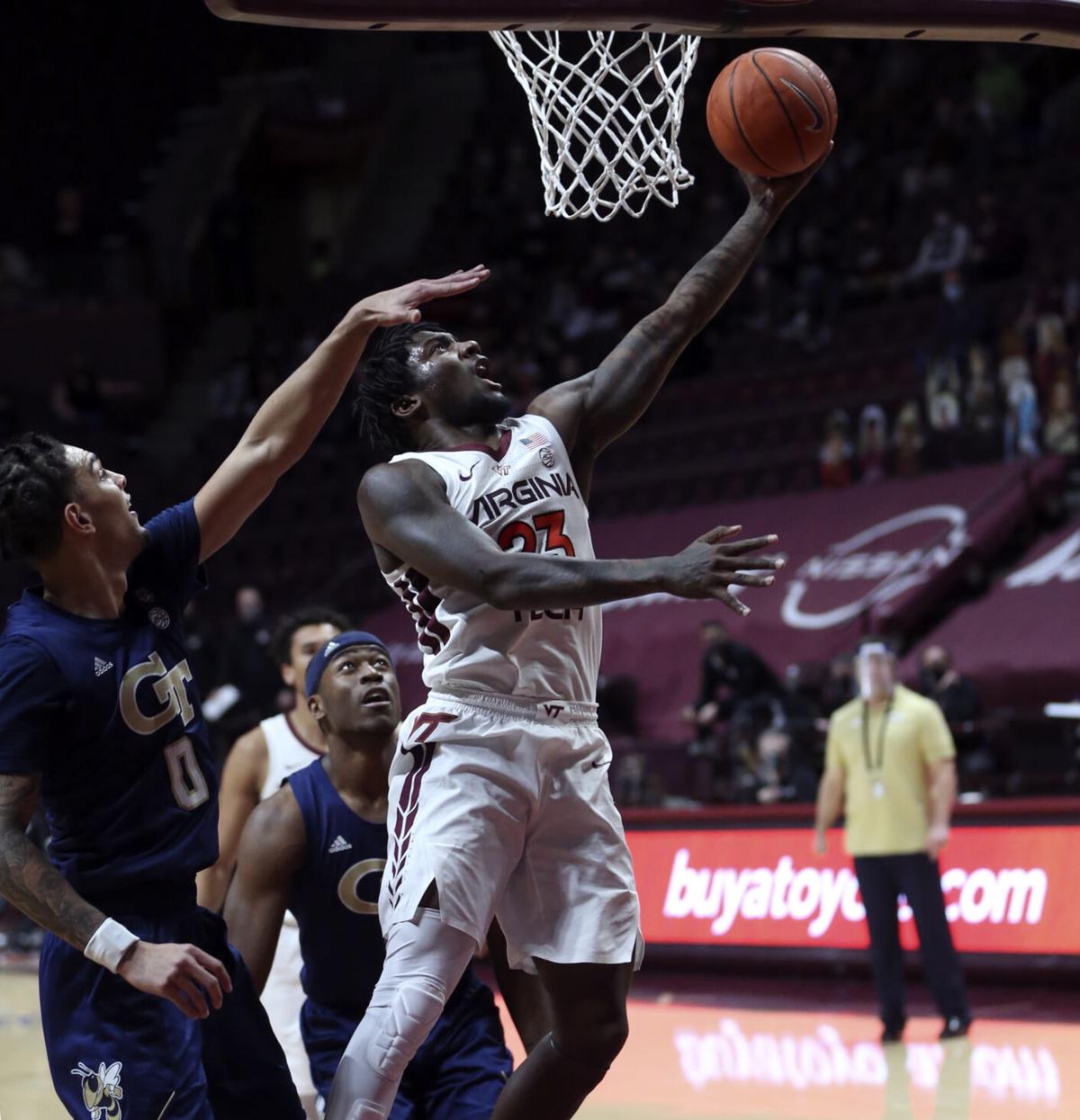 Virginia Tech's Tyrece Radford (23) scores past Georgia Tech's Michael Devoe (0). Radford had missed the Hokies' previous four games after being arrested and suspended from the team.

BLACKSBURG — Many men’s basketball teams have had a hard time winning their first game back after a long layoff that resulted from COVID-19 issues.

Virginia Tech was no exception Tuesday.

After going 16 straight days without playing a game, Virginia Tech returned to the court with a 69-53 loss to Georgia Tech at Cassell Coliseum.

“For the first time in recent memory, … we lost our edge a little bit. We got hit in the stomach and we stepped away from it,” Hokies coach Mike Young said.

“Win, lose or draw, we had to get … back on the floor. We had to play. We had to compete. With limited practices.

“No excuse, … but I got a number of guys over there in that hotel [quarantining] for 10 days and … now we’re going to play an ACC league game. Good luck to you. But they did it and they fought.”

“I’ve referenced playing with our teeth sharp. I was concerned that we would lose some of that. And I saw that,” Young said. “Just not that same toughness, that same connectedness that has come to define this team.

“We had to get this one behind us, win, lose or draw.”

Virginia Tech turned the ball over 16 times, including 11 times in the first half.

“Eleven turnovers in the first half was sickening,” Young said. “They disrupted us and they had us back on our heels.”

The Hokies shot just 41.3% from the field and made only five 3-pointers against the visitors’ 1-3-1 zone defense.

The 53 points were the fewest the Hokies have scored this season.

“We weren’t ourselves,” Young said.

The Hokies’ games against Florida State and Louisville two weeks ago were postponed because of foes’ COVID-19 issues.

But Virginia Tech ultimately wound up with COVID-19 issues of its own that week. So Virginia Tech had to postpone last week’s games against North Carolina and FSU.

Young said last week that two non-players in the program tested positive and “too many” players were quarantined and unable to practice because of contact tracing.

Keve Aluma had 12 points and 14 rebounds for the Hokies, who remained in third place in the ACC standings. Nahiem Alleyne also scored 12 points.

The Hokies’ starting lineup Tuesday included Tyrece Radford, who had missed the Hokies’ past four games. Radford was suspended Jan. 25 after being arrested by Blacksburg police a day earlier.

Radford was found guilty on Feb. 3 in Montgomery County General District Court of first-offense driving under the influence. Radford also pleaded no contest on Feb. 3 to carrying a concealed weapon. Judge Randal Duncan took the gun case under advisement for a year.

“We followed the process and procedures of the department,” Young said. “He was a champion throughout, did exactly what he was supposed to do, and here he is. Proud of him with how he’s handled himself over the last three weeks.”

The Hokies played without guard Jalen Cone, who suffered an ankle injury in the Hokies’ Feb. 6 win at Miami.

“It’s too early to give you a definitive answer [on his return],” Young said. “It’s going to be a bit more down the road than I had anticipated.”

The game was tied at 24 at halftime, but the visitors scored the first five points of the second half and led the rest of the way.

Virginia Tech backup center Cordell Pemsl, who had not played since late December because of a back injury, played Tuesday.

Virginia Tech's Justyn Mutts (25) has the ball tipped from him by Georgia Tech's Michael Devoe (0) in the Hokies' loss.

Virginia Tech's Tyrece Radford (23) scores past Georgia Tech's Michael Devoe (0). Radford had missed the Hokies' previous four games after being arrested and suspended from the team.