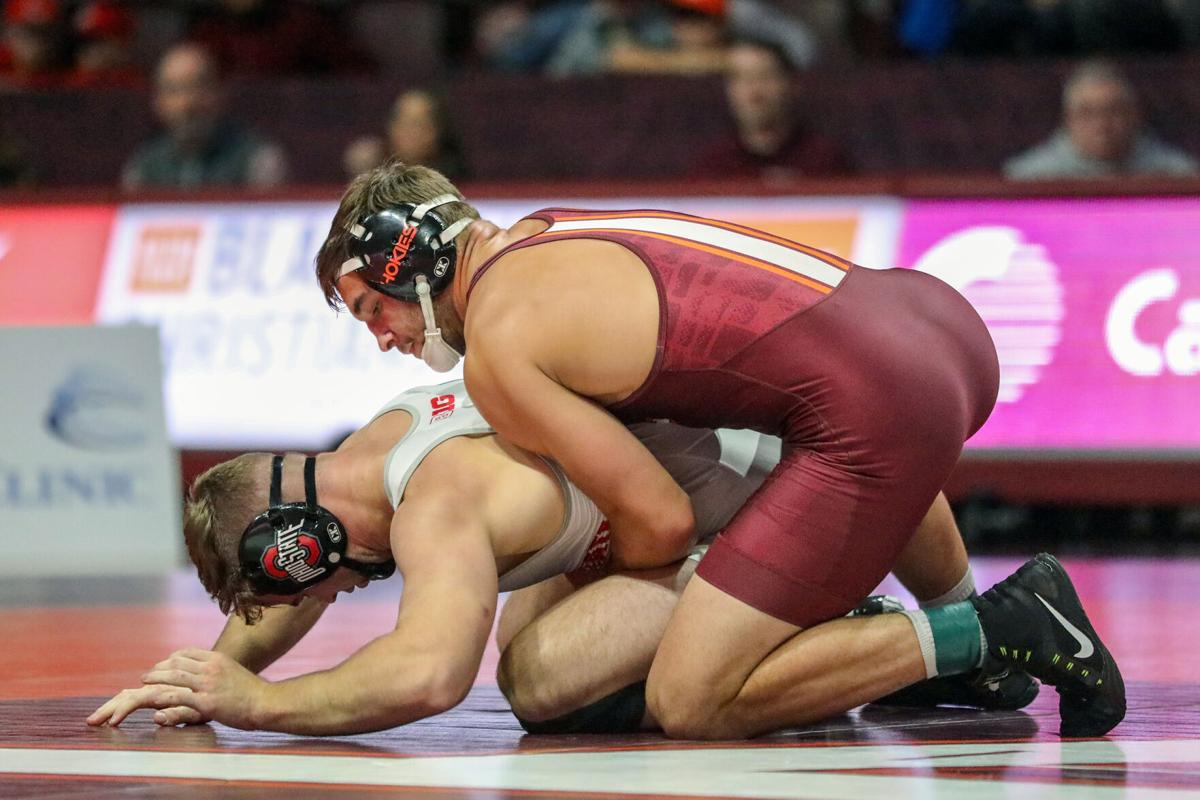 Christiansburg graduate Hunter Bolen (top) of Virginia Tech beat Rocky Jordan 7-1 at 184 pounds on Friday night. Bolen was one of four Hokies who won their bouts. 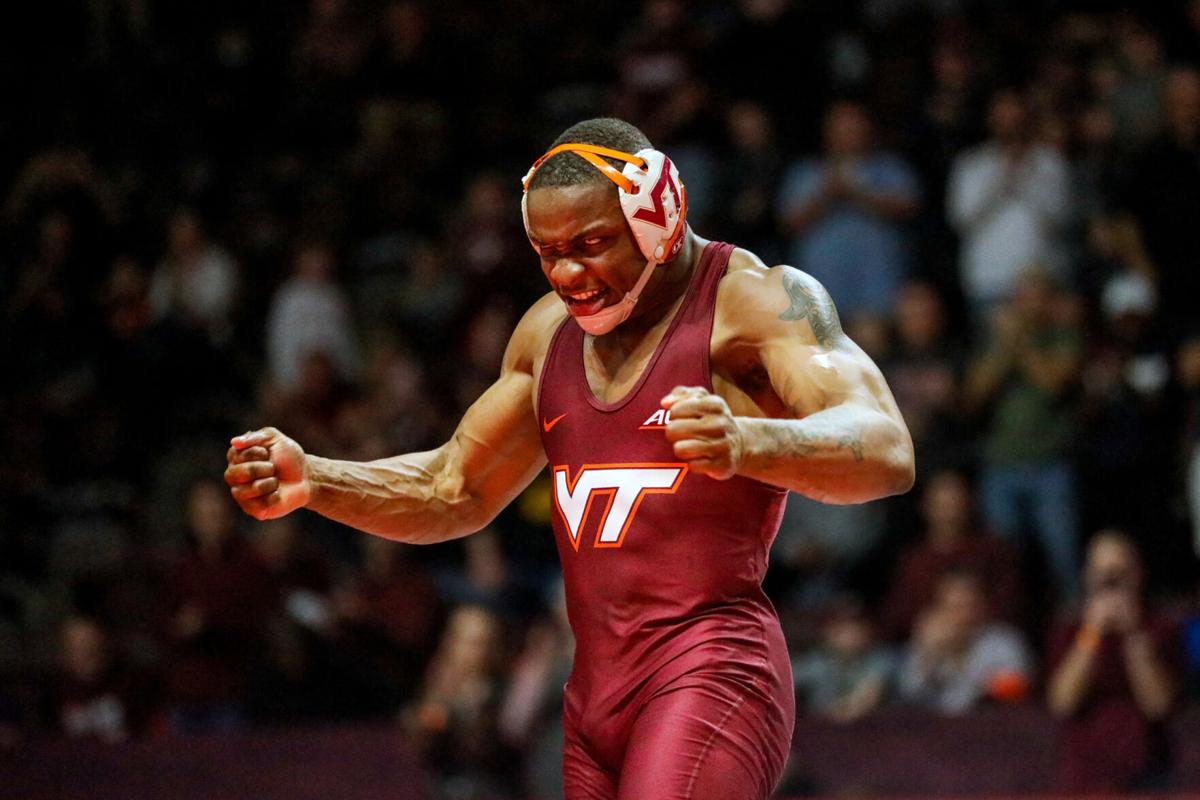 An exuberant Mekhi Lewis of Virginia Tech celebrates his 6-4 win over Ethan Smith of Ohio State at 174 pounds on Friday night. Lewis was one of four Hokies who won their bouts.

BLACKSBURG — The Virginia Tech wrestling team did not pass its first test of the season.

Ninth-ranked Ohio State won the final two matches of the night to rally past the eighth-ranked Hokies 17-13 on Friday at Cassell Coliseum.

It was the first dual match of the season for the Hokies.

“We knew it was going to be pretty evenly contested,” Tech coach Tony Robie said after the match. “We lost some close matches.

“Probably an area that we need to work on is finishing takedowns. Probably cost us some matches.”

“We had an opportunity … to have a special victory in Cassell over a good team in front of a great crowd. So it’s disappointing that we didn’t get the W,” Robie said. “But at the end of the day, it’s still November. And March is a long ways away.

“But technically, there’s some things we definitely need to correct. You’ve got to learn from your losses.”

The fourth-ranked Lewis beat sixth-ranked Ethan Smith 6-4 at 174 pounds to cut the Ohio State lead to 12-10.

“He could’ve scored at least one or two more takedowns, but that [Ohio State] guy’s good,” Robie said.

Lewis, a former NCAA champ at 165, earned an escape point early in the third period to grab a 4-3 lead. He had a takedown to extend his lead to 6-3.

After the two wrestlers went off the mat with 31.5 seconds left, there was some jawing and the two had to be separated.

Lewis beat his chest at the end of the match.

“I have no idea what was said, but it obviously set him off,” Robie said.

“He dominated every second of the match,” Robie said.

Hoffman picked up an escape point to grab a 3-2 lead in the third period.

“You’ve got to finish takedowns,” Robie said of Howard. “You can’t get to the leg that many times and have the same thing happen and not make adjustments.

“The blood didn’t help us. I think there were six blood timeouts. Cody’s really good at getting guys tired, and it’s hard to do that when that happens.”

A win in the final bout would have won the match for the Hokies. But seventh-ranked heavyweight Tate Orndorff beat 14th-ranked Nathan Traxler 3-2 to seal the win.

It looked like Traxler had scored a third-period takedown to grab a 3-1 lead, but the officials ruled there was no takedown. Robie challenged the call, but the call stood after a replay review.

Orndorff had a takedown with about a minute left to grab a 3-1 lead.

“Heavyweight, we need to be in a little better shape. We need to be able to wrestle the whole time,” Robie said.

“Not offensive enough,” Robie said of Latona. “He didn’t get to the leg one time and that’s a function of not doing enough.

“When … you’re not aggressive and you don’t attack at a high rate, you put yourself in a position to lose.”

“Bryce has got to wrestle a little smarter sometimes,” Robie said. “There are certain positions against Sasso that you really want to try to avoid.”

The Hokies were without two injured wrestlers.

Christiansburg graduate Hunter Bolen (top) of Virginia Tech beat Rocky Jordan 7-1 at 184 pounds on Friday night. Bolen was one of four Hokies who won their bouts.

An exuberant Mekhi Lewis of Virginia Tech celebrates his 6-4 win over Ethan Smith of Ohio State at 174 pounds on Friday night. Lewis was one of four Hokies who won their bouts.