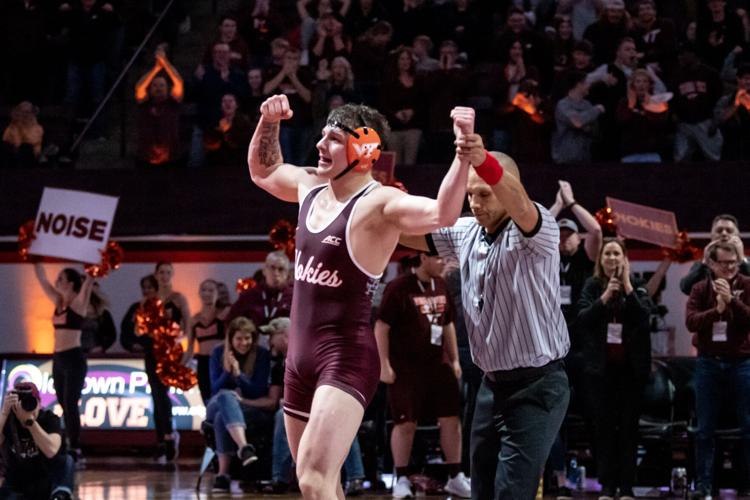 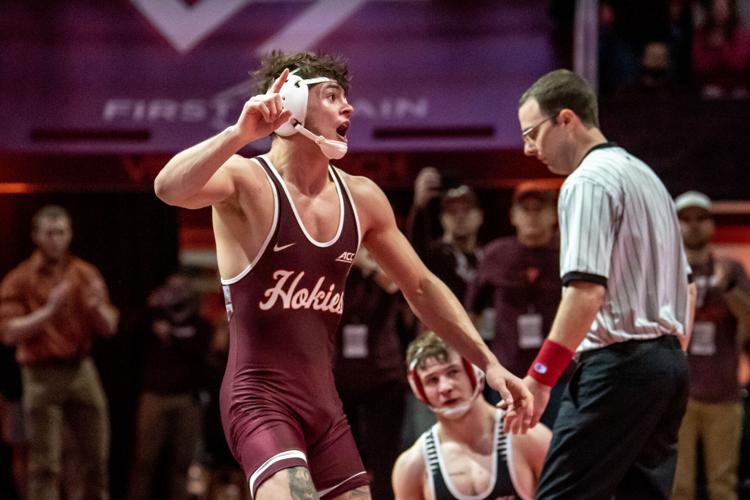 Sixth-ranked Bryce Andonian of Virginia Tech celebrates his 24-10 win over seventh-ranked Ed Scott of N.C. State at 157 pounds. It was Andonian's season debut in the Tech lineup. 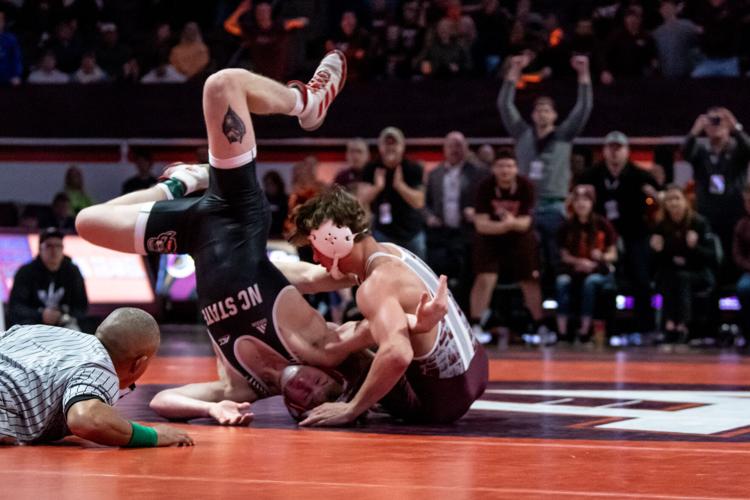 Sixth-ranked Bryce Andonian of Virginia Tech (right) beat seventh-ranked Ed Scott (upside down) of N.C. State 24-10 at 157 pounds to give Tech the lead for good at 10-6.

BLACKSBURG — Andy Smith picked a great time to pull off the biggest win of his Virginia Tech wrestling career.

“By far the best moment I’ve had in my career so far,” Smith said after the match.

“That’s probably the loudest and the funnest atmosphere we’ve ever had in Cassell,” Tech coach Tony Robie said. “That atmosphere was electric in there and it certainly contributed to us winning.

“It’s definitely a great win for us.”

Third-ranked Trent Hidlay of State beat seventh-ranked Hunter Bolen (Christiansburg) 5-3 in overtime at 184 pounds to cut the Hokies’ lead to 13-11.

Considering State had the higher-ranked wrestler in each of the remaining two bouts, the Wolfpack seemed poised for a comeback win.

But Smith rose to the occasion in the next bout.

With the 197-pound match tied at 1 in the third period, the 26th-ranked Smith recorded a takedown of the sixth-ranked Trumble with less than 30 seconds left to grab a 3-1 lead. Smith held on for a 3-2 win to give the Hokies a commanding 16-11 lead with only one bout left.

“He stepped up,” Robie said. “If the match comes down to toughness, he’s got a good chance to win. He fought his butt off in a couple positions to not get scored on.

“This was his moment. We talked about that before the match.

“When you’re in that kind of atmosphere and you have that kind of opportunity, you have to have the mentality that you’re going to make it your moment. And he really did. I think that was a huge, huge win for him.”

Smith, a junior, beat his chest in the waning seconds of his bout. He improved to 11-5 on the season.

He was the Timesland wrestler of the year as a Christiansburg senior in 2019, when he won a state title.

“I wrestled in Cassell in high school for senior night, but I’ve got to say this was a lot cooler,” Smith said. “That was just a thrill from start to finish.”

Tech beat State for the second time in three years. Two years ago, the win over State propelled Tech to the ACC regular-season title.

COVID-19 woes resulted in Tech forfeiting last year’s ACC showdown with State. The teams did meet later in the season for a nonconference match, which State won 21-10. Last season marked the third time in the last four years that State swept the ACC regular-season and tournament crowns. Tech finished second in both the ACC standings and the tournament last year before finishing eighth at the NCAA championships.

“It was fun. If you were out there, you felt it,” Henson said. “We’re a solid team and we’re young. We’re going to do damage in this postseason.

“We put in the work every day and it showed out there.”

It was the latest highlight in Henson’s impressive freshman season — not that Henson is too surprised by his success.

Bryce Andonian, ranked sixth at 157, squashed seventh-ranked Ed Scott by the eye-popping score of 24-10 to extend the Tech lead to 10-6. It was a major decision, so Andonian earned four points instead of three. Tech led the rest of the way.

Andonian, a 2022 All-American who suffered a preseason foot injury, was in the Tech lineup Friday for the first time this season.

“It’s been a surprise year — just a lot of injuries,” Andonian said. “Injury after injury.”

He made his season debut last weekend, competing as an individual in a tournament at Mount Union. He re-injured his shoulder in that tournament, but he decided Friday to wrestle against State.

“We left the ball in his court, and he stepped up,” Robie said. “He said he wanted to do it for the team. He put on a show.

Andonian found inspiration from the belief his teammates had in him.

“All week, … whether I was at the doctor’s office or not even showing up to practice because I was having appointments, at the end of the day I was getting texts from my boys,” Andonian said.

“I’m grateful that I was able to go out and be fearless.”

Four of the 10 bouts went to overtime, with State winning all four.

The slumping Hokies will visit No. 19 Clemson on Saturday.

The Hokies carry a seven-game losing streak into the rematch of the 2022 ACC Tournament final.

Sixth-ranked Bryce Andonian of Virginia Tech celebrates his 24-10 win over seventh-ranked Ed Scott of N.C. State at 157 pounds. It was Andonian's season debut in the Tech lineup.

Sixth-ranked Bryce Andonian of Virginia Tech (right) beat seventh-ranked Ed Scott (upside down) of N.C. State 24-10 at 157 pounds to give Tech the lead for good at 10-6.