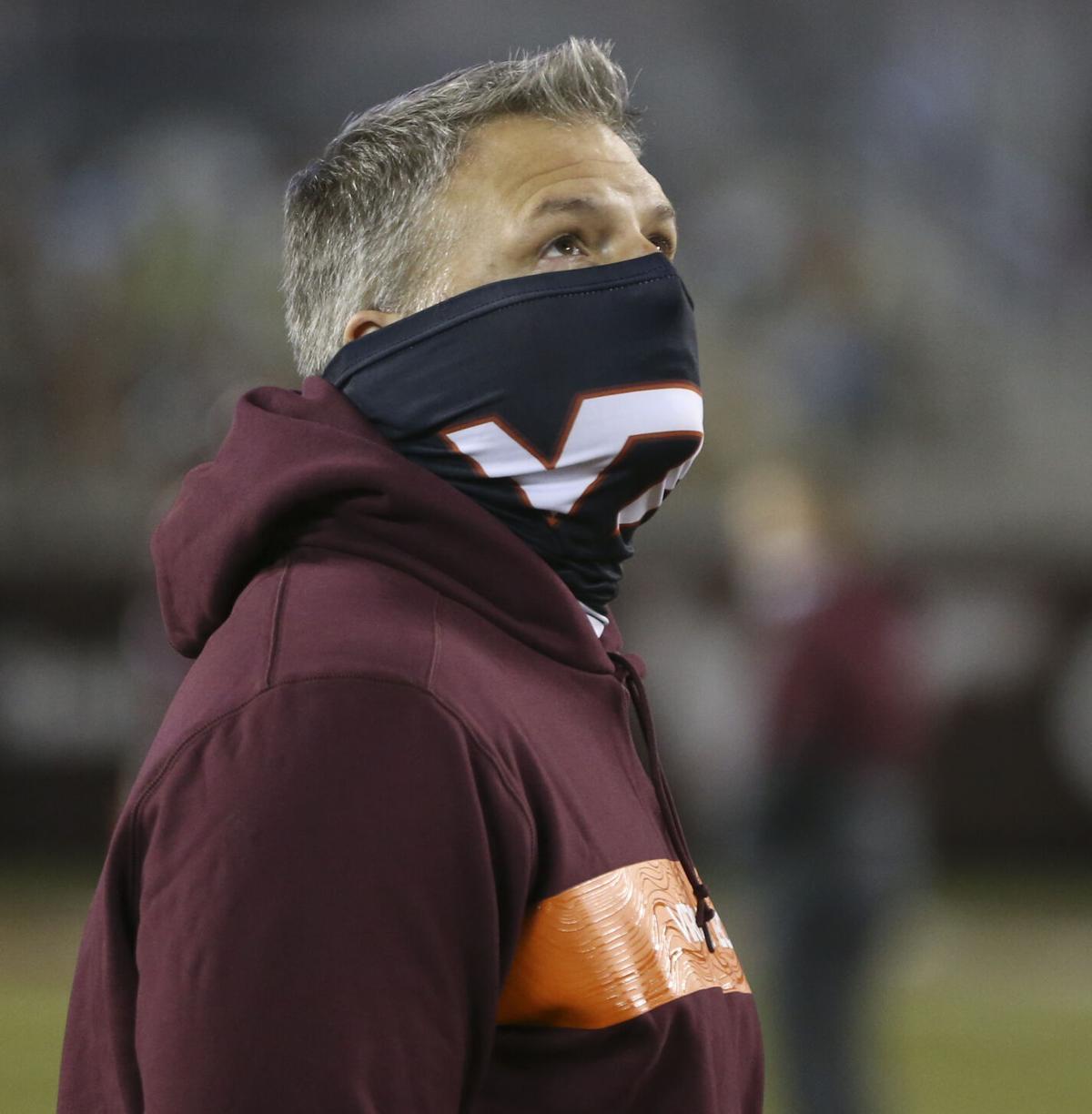 Virginia Tech head coach Justin Fuente prior to the start of the Virginia-Virginia Tech game in Blacksburg on Saturday. 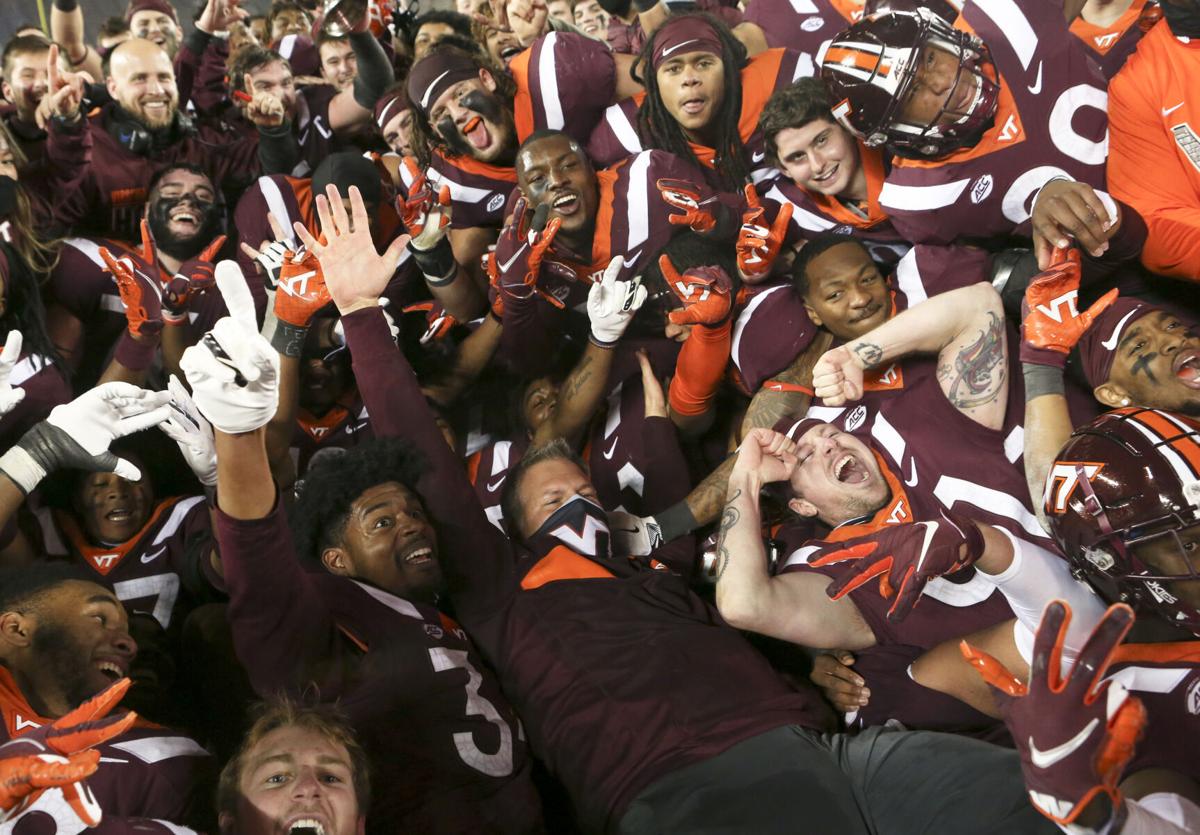 Virginia Tech head coach Justin Fuente, center, and his team celebrate winning back the Commonwealth Cup from UVa in Blacksburg on Saturday. 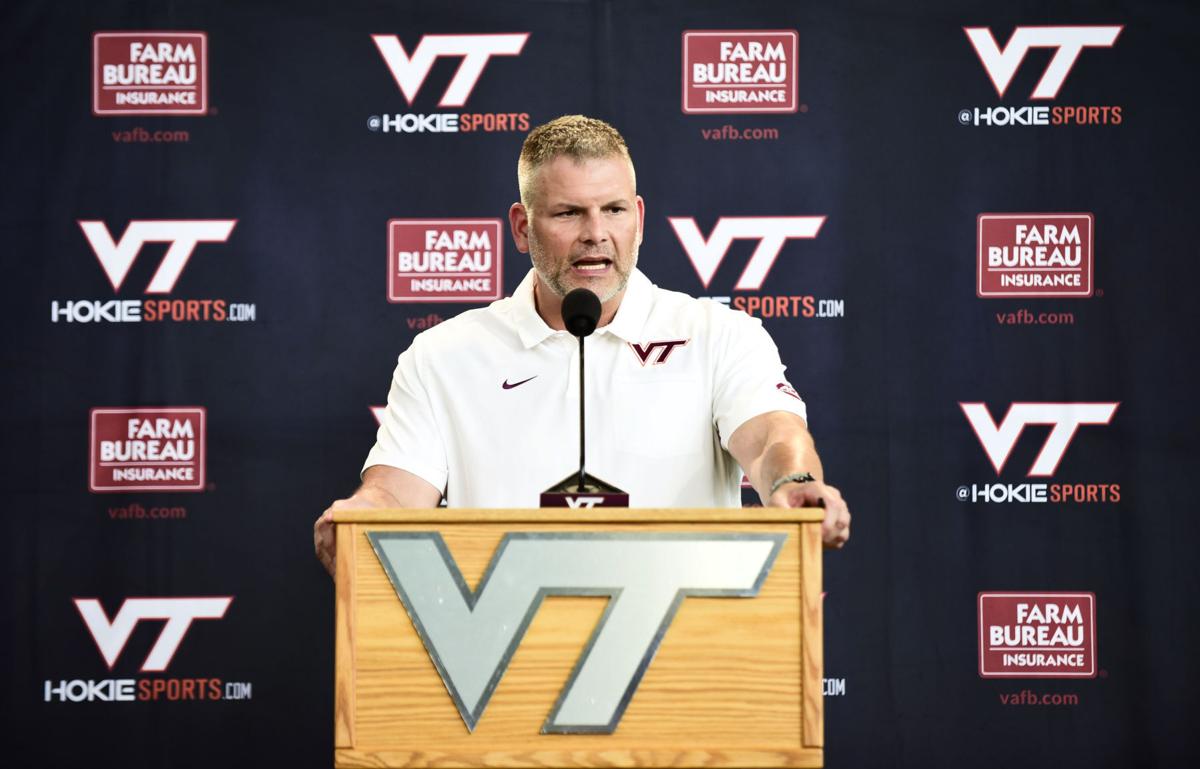 Virginia Tech football coach Justin Fuente at the podium before the start of fall camp in 2019.

The media availability is the same day Fuente’s buyout drops by $2.5 million — he would still be owed $10 million — but multiple sources with knowledge of the situation have told The Roanoke Times that Fuente will be the coach of the team in 2021 barring a last minute change.

Tech would have been on the hook for the entirety of Fuente’s $10 million buyout if they parted ways with the coach, but a source said that wasn’t a consideration in Babcock’s decision.

Multiple sources described the atmosphere at the football offices on Monday as “business as usual” with Fuente working out of his office and offensive coordinator Brad Cornelsen extending a preferred walk-on offer to Tupelo High School quarterback Jake Weir while Tech players had a planned off day.

After The Roanoke Times initially posted this article online Monday, the university sent out an additional email regarding a planned news conference for early signing day on Wednesday that says “Justin Fuente and other members of the Tech coaching staff” will participate.

It was the first time the football team finished with a losing record in the regular season since 1992, but the team is coming off an emotional 33-15 win over UVa to bring back the Commonwealth Cup.

The program’s 15-game win streak in the rivalry game came to an end last year.

The Hokies haven’t announced whether they will accept a bowl bid this season to continue their FBS-leading streak of 27 consecutive bowl appearances.

Babcock hired Fuente on Nov. 29, 2015, to replace longtime coach Frank Beamer, who retired after 29 seasons at the helm.

The one-time TCU offensive assistant joined the Hokies after turning around a Memphis program that won three games combined in the two seasons before he took the job.

Fuente is 38-26 in Blacksburg and has taken the team to four straight bowl games.

Tech was 10-4 in his first season and reached the 2016 ACC title game. The team finished 8-5 last year and won six of seven games to put them within one game of returning to the ACC title game.

The Hokies brought back much of the starting lineup from last season, but the coronavirus created a series of hurdles that were hard for the program to overcome.

The program was forced to cancel spring camp and was one of only three ACC teams not to have a single practice. Fuente’s new defensive coaching staff had to settle for virtual instruction all the way through June when players were finally allowed back on campus.

Tech faced disruptions early in fall camp as well and had to pause football activities in September as the coronavirus made its way through much of the team and coaching staff. When the Hokies did open the season Sept. 26 against N.C. State, they had 23 players out and multiple assistant coaches sidelined from positive tests or contact tracing.

Tech was missing most of its secondary for a Week 3 loss at North Carolina in a game Fuente said later probably shouldn’t have been played.

The season took a more sustained downturn starting in early November with a heartbreaking loss to Liberty. Fuente called a timeout in the final second right that wiped out what would have been a game-winning touchdown on a 59-yard field goal block.

“If we are going to take a timeout, I take it early so they don’t get a chance to snap it,” Fuente said in the wake of the Nov. 7 loss. “I said timeout, they didn’t hear me and I screamed timeout. The ref blew the whistle, they snapped it and we blocked it and obviously it didn’t count. It’s pretty crushing.”

Fuente still felt he had the administration’s support as the losses piled up.

Fan support for Fuente dwindled in recent weeks, but his confidence in the direction of the program never wavered. Tech ended the season on a high note by bringing the cup home and ending a four-game losing streak.

“Guys, we are playing football in the middle of a pandemic in the most extraordinary of circumstances we’ve ever seen,” Fuente said Nov. 21. “I mean the notion it’s something terrible is wrong or whatever is just ridiculous. I don’t think anybody has any concept what these kids live is like every single day trying to handle this. Does that mean we should still play better? Sure, absolutely. Let’s take things in a little bit of context here and we are going to keep fighting and battling our tails off and doing right by our players and staff and doing the best job we can.”

Virginia Tech athletic director Whit Babcock is confident in the direction of the football program under head coach Justin Fuente.

Virginia Tech head coach Justin Fuente prior to the start of the Virginia-Virginia Tech game in Blacksburg on Saturday.

Virginia Tech head coach Justin Fuente, center, and his team celebrate winning back the Commonwealth Cup from UVa in Blacksburg on Saturday.

Virginia Tech football coach Justin Fuente at the podium before the start of fall camp in 2019.