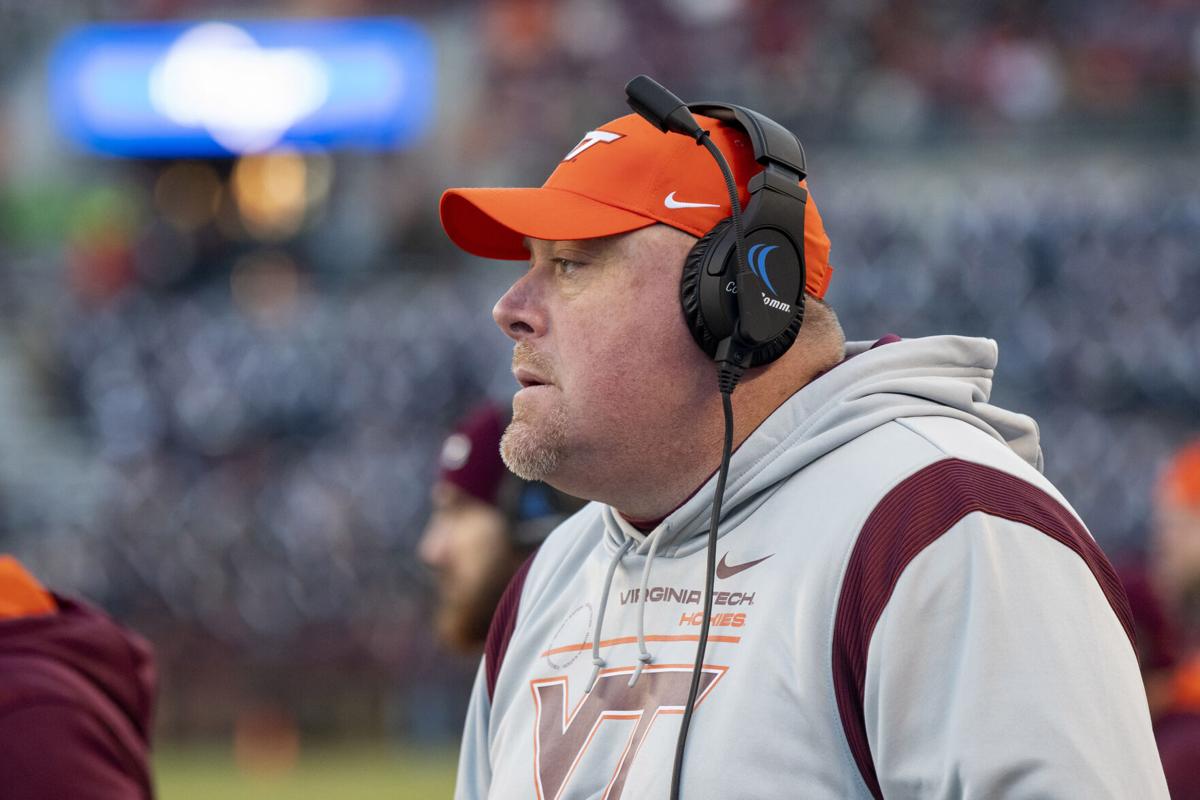 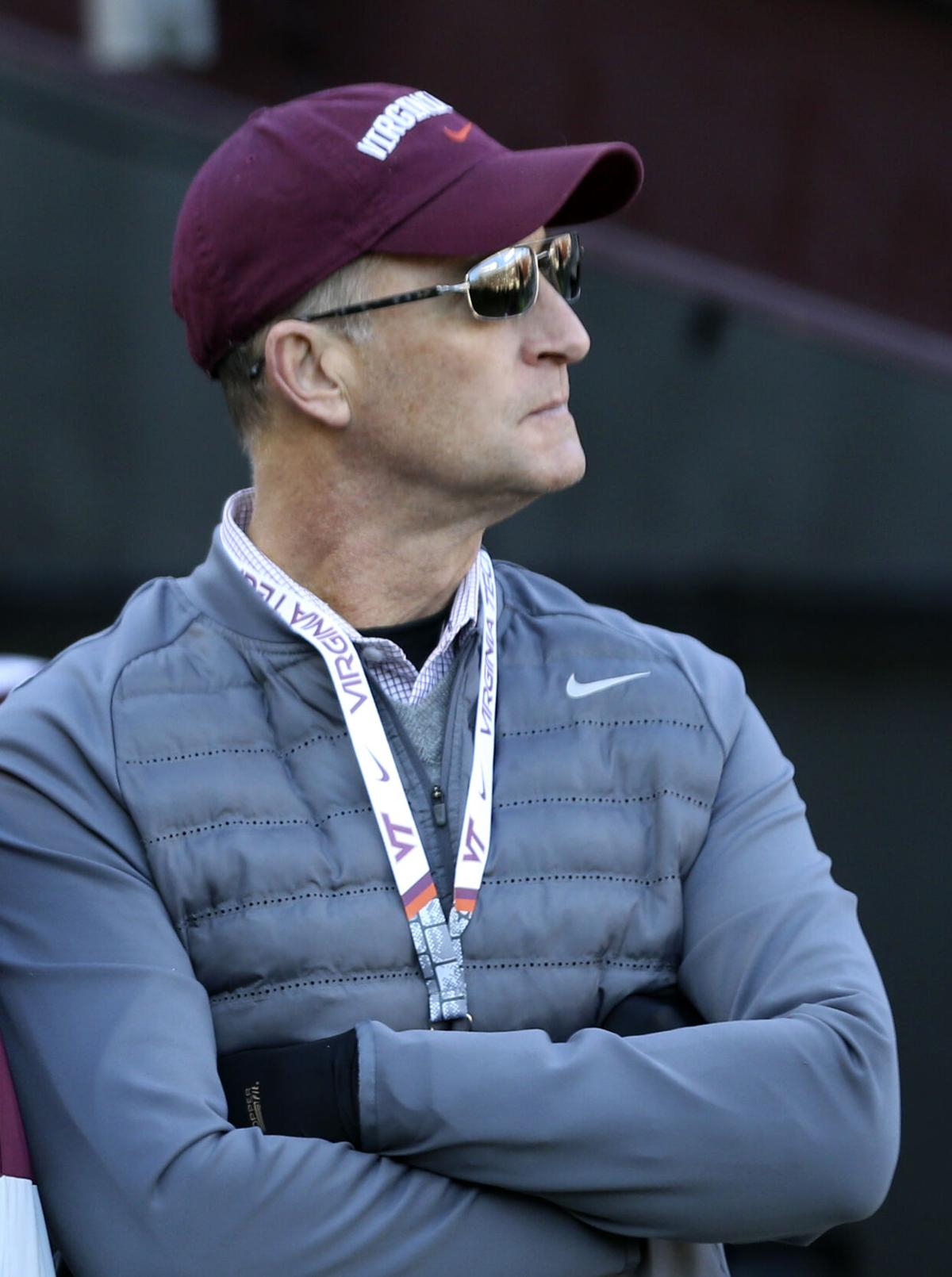 Virginia Tech athletic director Whit Babcock stands on the sideline prior to the start of the Duke-Virginia Tech football game in Blacksburg on Saturday.

BLACKSBURG — The Justin Fuente era in Blacksburg has come to an end.

According to a press release, Virginia Tech and the coach “mutually agreed” to part ways Tuesday with two games left to play in the 2021 season. The school announced that co-defensive line coach J.C. Price will be the interim coach for the remainder of the season.

Fuente delivered the news to the entire locker room on Tuesday morning before the announcement was made public. The news came as a shock to players who were gathered at the Merryman Center for their normal morning practice routine.

“We made this change in leadership most simply because we did not have the level of consistency, nor the full development of a true team identity,” Babcock said, in a news conference on Tuesday.

The Hokies got to a promising start this fall with an upset win over then No. 10 ranked North Carolina, but those good vibes vanished thanks to a series of one possession losses. Losses to Syracuse and Boston College — teams that were previously winless in the ACC — knocked them out of the Coastal Division title race.

Babcock told reporters Tuesday that he already made up his mind before Tech’s 48-17 win over Duke that left the program one win away from becoming bowl eligible.

Fuente, 45, exits Virginia Tech with an overall record of 43-31 and four bowl appearances.

“I was just raised to unconditionally support coaches 100% until the day you can’t,” Babcock said. “And it just got to a day that I couldn’t do it anymore.”

The two sides had a tentative agreement in place as of Tuesday afternoon to pay Fuente an $8.75 million buyout (down from $10 million) with the coach getting the amount in a lump sum instead of quarterly installments through the duration of his contract.

“Justin didn’t fail,” Babcock said. “Our team didn’t fail. We all did.”

Babcock hired Fuente on Nov. 29, 2015, to replace longtime coach Frank Beamer. Beamer guided the Hokies for 29 seasons and left the program amidst the longest bowl streak in the country and a double-digit win streak over the University of Virginia.

Both those streaks ended under Fuente’s watch.

The one-time TCU offensive assistant came to Virginia Tech after turning around a Memphis program that won three games combined in the two seasons before he was hired.

On Tuesday, Babcock referred to Fuente multiple times as a five-star recruit that “didn’t ultimately work out.”

Fuente was never able to replicate the success he had right out of the gate with transfer quarterback Jarod Evans in 2016. Tech went to the ACC title game in Fuente’s first season and finished with 10 wins thanks to a memorable victory over Arkansas in the Belk Bowl. The Hokies were ranked in the season’s final AP Poll (No. 16) for the first time since 2011.

Tech’s offense was a shell of its former self this fall with rankings near the bottom in the FBS in total yards, points and passing yards per game. The downturn came after Fuente expressed confidence in the group throughout the offseason.

Much of that confidence stemmed from quarterback Braxton Burmeister, who Fuente anointed as the starter going into the team’s offseason workouts. It was a rare step for the coach, who hadn’t gone through a spring without a quarterback competition since he was coaching Paxton Lynch at Memphis.

With Burmeister firmly entrenched as the starter, Fuente even opted against adding any veteran experience at quarterback out of the transfer portal despite losing Hendon Hooker and Quincy Patterson.

Tech signed Texas A&M transfer Connor Blumrick, who hadn’t played quarterback in two-plus years. That decision proved costly when Blumrick suffered a knee injury in September while Burmeister struggled and dealt with a series of injuries of his own.

The Hokies also weren’t able to find a replacement for former starting running back Khalil Herbert. The Kansas transfer was selected by the Chicago Bears in the sixth round of last year’s draft after a breakout year in Blacksburg.

Tech carried 10 running backs on the roster — the largest number in the ACC — throughout the offseason, and couldn’t find a consistent option for much of the season. The Hokies’ 3.5 yards per carry through the first six games was another number that ranked near the bottom of the FBS.

Those offensive struggles were most pronounced in losses to West Virginia and Pittsburgh.

Tech’s trip to Morgantown ended at the goal line, the team’s third failed trip inside the red zone of the game. The Hokies had a fresh set of downs at WVU’s 3-yard line, but failed to score what would have been the game winner. The 28-7 loss to Pittsburgh was the program’s worst overall offensive performance of Fuente’s tenure. Tech had 224 total yards while Braxton Burmeister had a quarterback rating of 11.6.

The issues for Fuente started in 2018 when Tech suffered a series of embarrassing losses on its way to a 6-7 finish. The lowlight for Hokies fans was a 49-35 loss at Old Dominion in a game they were favored by 29 points.

It was Old Dominion’s first win over a power five program and the biggest upset for an ACC school in 40 years.

Tech had five players enter the transfer portal when the team returned from winter break including multiple starters (quarterback Josh Jackson and wide receiver Eric Kumah). Fuente downplayed the departures, and still had the backing of the administration.

“I think the world of Justin and like him personally,” Babcock said in a 2019 interview with The Roanoke Times. “Our rapport seems to be very good. I really believe in him and what he stands for in a person and football coach. A lot of athletic directors say that, I whole-hearted believe it. We got the right guy.”

The 2019 season turned out to be another transition year for the Hokies with longtime defensive coordinator Bud Foster announcing he would step down at the end of the season.

Tech struggled right out of the gate and dropped to 2-2 with an ugly 45-10 loss to Duke. Fuente replaced starting quarterback Ryan Willis with Hooker, brought in longtime coach Jerry Kill as a special adviser and the Hokies won six of their next seven games.

The only loss came with Quincy Patterson subbing for an injured Hooker in South Bend against then No. 16 Notre Dame. They were a fourth down stop away from pulling out the upset in the final minutes.

Tech had a chance to clinch another ACC title appearance (and an Orange Bowl bid) with a win in the Commonwealth Cup, but came up short and closed out the year with a loss in the Belk Bowl to Kentucky. Those back-to-back losses did nothing to diminish Fuente’s optimism for the future with 19 starters set to return and a rebuilt coaching staff featuring newly promoted defensive coordinator Justin Hamilton.

The positive outlook Fuente had was part of the reason why Tech’s athletic department and fan base were caught off guard when reports surfaced he planned to interview for the head coaching vacancy at Baylor.

Fuente’s interview with Baylor came less than 24 hours after Tech finalized its 2020 coaching staff with the addition of defensive backs coach Ryan Smith. The whirlwind courtship ended with Fuente rebuffing Baylor and tweeting out a photo of his newly assembled staff caption “#Thisishome.”

“Of course you never love it when your coach is talking to other people, but he has turned down a number of other opportunities, a lot of money and his loyalty is probably not as widely known as it should be,” Babcock said, at the time.

Tech didn’t make any changes to Fuente’s contract, but he and Babcock discussed ways the university could make strategic investments focused on the program’s “general operating budget, recruiting and facilities.” The Hokies added multiple recruiting staffers during the offseason despite a hiring freeze in the wake of the COVID-19 pandemic.

The other hurdles from the pandemic were harder for Tech to overcome in 2020.

Tech’s revamped coaching staff didn’t get to work in person with players and the Hokies were one of only three ACC teams that didn’t get a single practice in before college athletics was shut down. The defensive coaching staff had to settle for virtual instruction all the way through June when players were finally allowed back on campus.

The Hokies had to pause football activities in September as the coronavirus made its way through much of the team and coaching staff. When the Hokies did open the season on Sept. 26 against N.C. State, they had 23 players out and multiple assistant coaches.

They were missing most of its secondary in a loss at North Carolina that Fuente later said probably shouldn’t have been played.

The season took a more sustained slide with a heartbreaking loss to Liberty. Fuente called a timeout in the final second that wiped out what would have been a game-winning touchdown on a 59-yard field goal block.

Fuente still felt he had the administration’s support as the losses piled up with the pandemic completing upending the team’s ability to properly practice.

“I mean the notion it’s something terrible is wrong or whatever is just ridiculous,” Fuente said. “I don’t think anybody has any concept of what these kids’ lives are like every single day trying to handle this. Does that mean we should still play better? Sure, absolutely. Let’s take things in a little bit of context here and we are going to keep fighting and battling our tails off and doing right by our players and staff and doing the best job we can.”

Babcock called a news conference a few days after the season where he announced Tech would be moving forward with Fuente as coach. Tech’s athletic director said he examined every aspect of the program and had a lengthy one-on-one sit down with Fuente to conclude the review that left him energized.

He also stressed that he didn’t want to “tear down” the program.

“We have a plan, we have hope for the future and we did what we thought was best,” Babcock said. “We felt like this is the most likely successful path. I feel good about it. I’m paid to do what is best, not always easiest or to pacify some others.”

Babcock is abandoning that plan less than 12 months later.

J.C. Price experienced a flood of emotions as Virginia Tech athletic director Whit Babcock followed the news of coach Justin Fuente’s departure with a request to take over the program on an interim basis, why he felt obligated to step into the role

Virginia Tech athletic director Whit Babcock stands on the sideline prior to the start of the Duke-Virginia Tech football game in Blacksburg on Saturday.