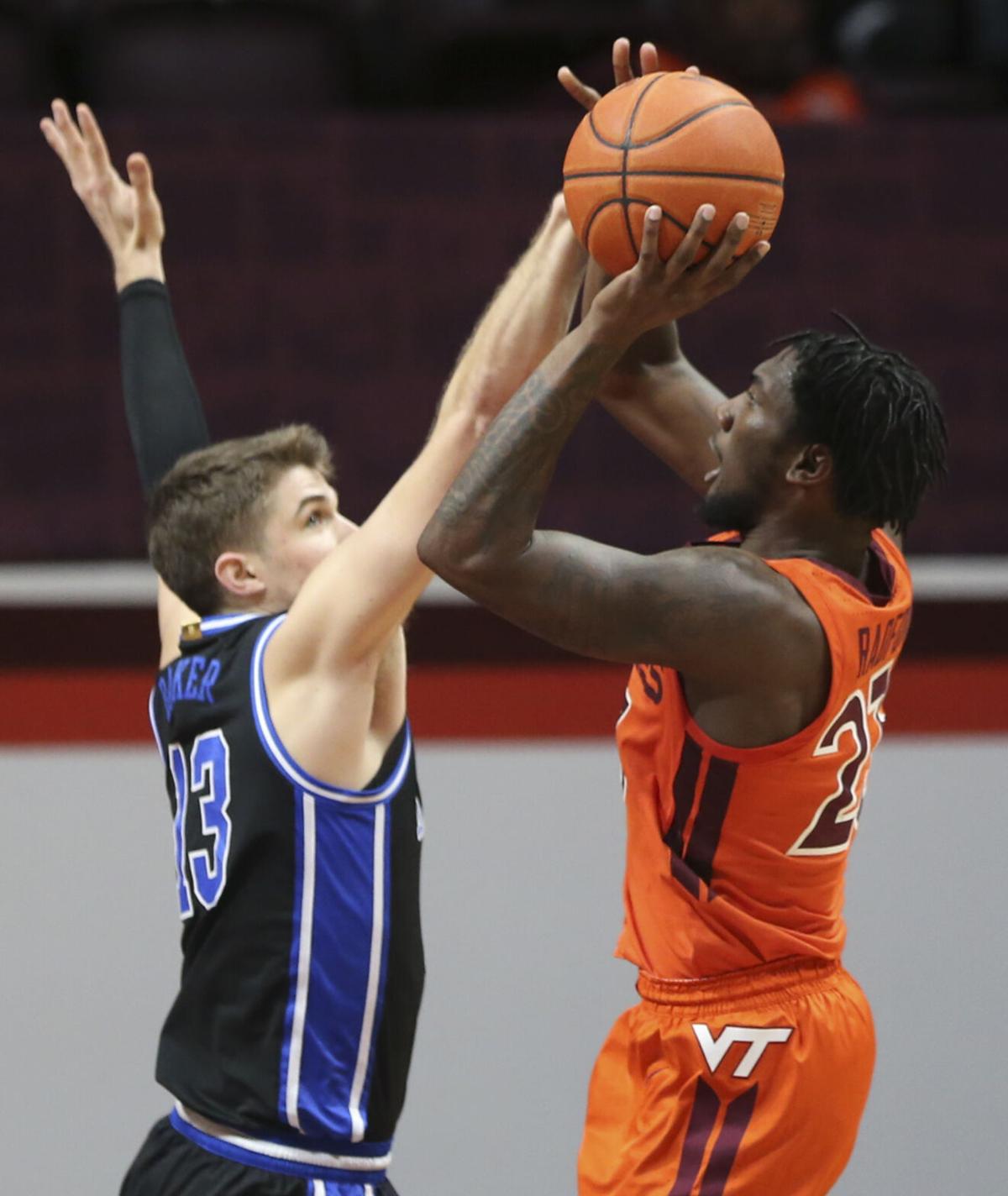 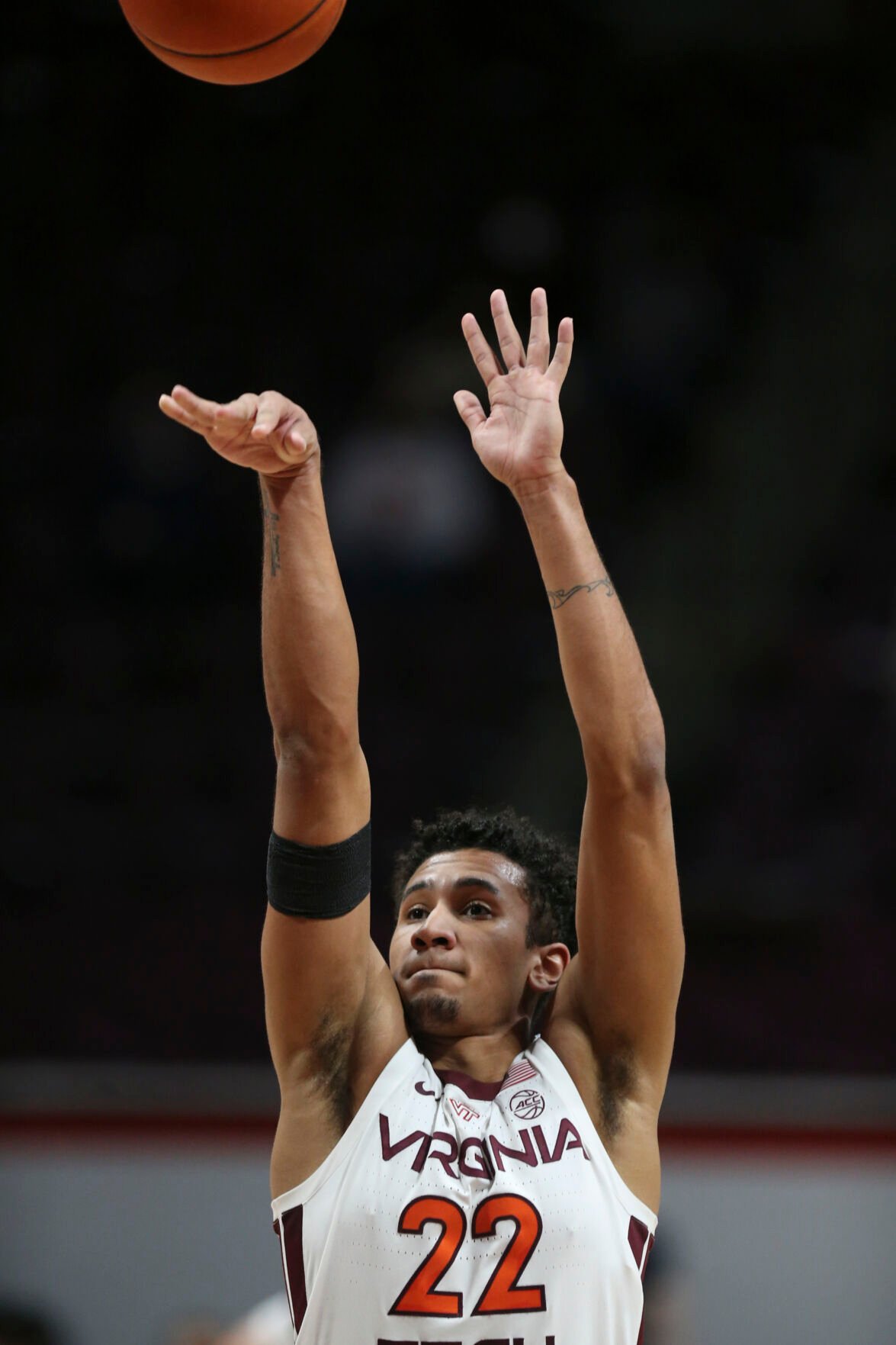 Virginia Tech's Keve Aluma has been named the national player of the week by the U.S. Basketball Writers Association.

He was not due to be arraigned in Montgomery County General District Court in Christiansburg until Feb. 9, but a disposition hearing on both charges has been scheduled for Wednesday.

“We’re going to go ahead and take care of everything [Wednesday],” Turk said Tuesday in a phone interview. “There’s not a lot to argue about here, … so I think a speedy resolution and a disposition for him sooner rather than later is going to be best for him.”

Radford was pulled over by Blacksburg police at 1:16 a.m. Jan. 24. He was unable to perform field tests properly, according to Blacksburg police, and was placed under arrest for driving under the influence.

He was given a breath test at the Blacksburg Police Department. His blood alcohol level was 0.13%, according to Blacksburg police.

“I expect him to plead to the DUI charge,” Turk said. “What’s usually done on a DUI with that particular category of a breathalyzer, it will be suspended [jail] time and suspended license with restricted privileges to drive — no jail time. “

Montgomery County Commonwealth’s Attorney Mary Pettitt said in an email last week that during a search of Radford related to the DUI arrest, “a pistol was found on his person.”

“We’re going to explain to the judge the circumstances surrounding that,” Turk said. “The gun was not loaded. It was a pistol. It was in his pocket. There was no ammunition on him or his car or anywhere else. He just had an empty gun in his pocket when he was stopped by police. He was very cooperative, told the police about the weapon.

“The commonwealth’s attorney agrees there was no ill will with respect to him having the gun.”

Turk said Radford, 21, intended to get a concealed-weapon permit.

“He actually had taken a course, … completing a safety course, which is required in Virginia before you can get a concealed weapons permit,” Turk said. “He was entitled to a concealed-weapons permit but did not fill out the paperwork and had not submitted that application.

“He thought once he took the class that that was OK for him to carry a concealed weapon.”

“He’s very sorry for putting himself in these circumstances and certainly sorry that he’s put his coaches and his team and the university through adverse circumstances as well, but he likewise understands and agrees that putting this behind him early as he can and taking full responsibility is what’s going to be best for him,” Turk said. “He simply wants to move on.”

Turk said he does not know if Wednesday’s hearing will pave the way for Radford to rejoin the Hokies this season.

Tech coach Mike Young was asked Monday on the ACC coaches’ weekly video conference if there was a path for Radford to rejoin the team this season or next.

“Yes. There is a path. I’m not sure when,” Young said Monday.

Young was asked what has to happen for Radford to rejoin the team.

“There’s a number of things here, none of which I’m comfortable sharing,” Young said Monday.

Pitt next for Hokies

The Panthers began the month with three straight wins — two over Syracuse and one over Duke.

“We have not played well defensively and we’ve not rebounded like we did,” Pitt coach Jeff Capel said.

Tech’s Keve Aluma, who had 29 points in last weekend’s win over Virginia, was named the Oscar Robertson national player of the week Tuesday by the U.S. Basketball Writers Association.

“He’s aggressive. He was absolutely dominant in their last game. … We’re going to have to figure out a way to try to slow him down a little.”

The ACC announced late Monday night that the next three games for the Florida State men’s basketball team have been postponed, including a Feb. 9 visit to Virginia Tech.

The postponements follow a positive COVID-19 test and subsequent quarantining and contact tracing in the FSU men’s basketball program.

The No. 20 Seminoles were supposed to visit Boston College on Tuesday and Pittsburgh on Saturday before visiting the Hokies next Tuesday. All three games are now off.

This is FSU’s second round of COVID-19 postponements in as many months.

No. 16 Virginia Tech at Pittsburgh

Notes: Justin Champagnie averages 20.1 points and 12.1 rebounds for Pitt. He was named to the Wooden Award Top 20 late-season watch list Tuesday. He is tied for the ACC lead with seven double-doubles and ranks fifth nationally in rebounding. … Au'Diese Toney averages 14.7 points for the Panthers, while Xavier Johnson averages 13.2 points. … Pitt has lost eight straight games to ranked foes. … Pitt is tied for 13th nationally in rebounds (41.1 rpg) and is tied for 14th in offensive rebounds (13.6 rpg). … Tech has beaten Pitt five straight times. … Tech has held its last two foes to 51 points.

Virginia Tech's Keve Aluma has been named the national player of the week by the U.S. Basketball Writers Association.