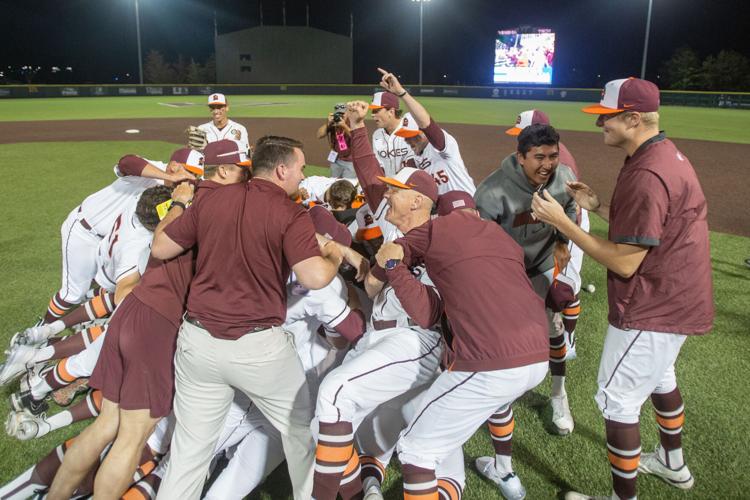 The Virginia Tech baseball team celebrates with a dogpile after beating Columbia in an NCAA regional final Sunday night. 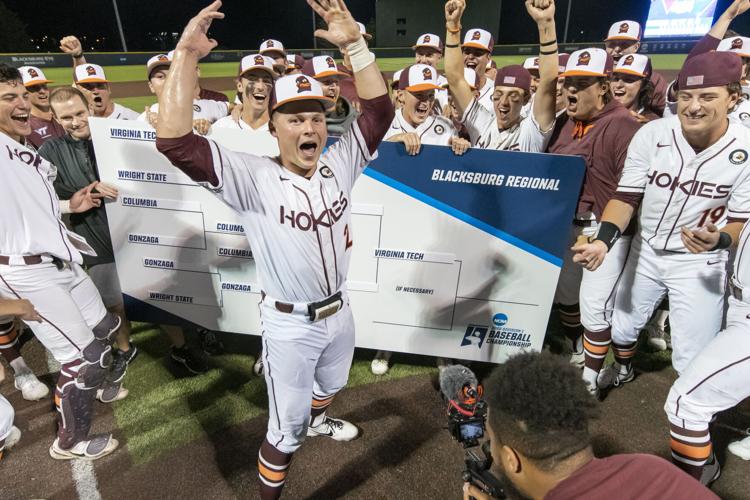 Virginia Tech senior Nick Biddison rejoices after slapping a “Virginia Tech” sticker on the champion’s line of the regional-bracket poster board after Tech won the Blacksburg Regional. 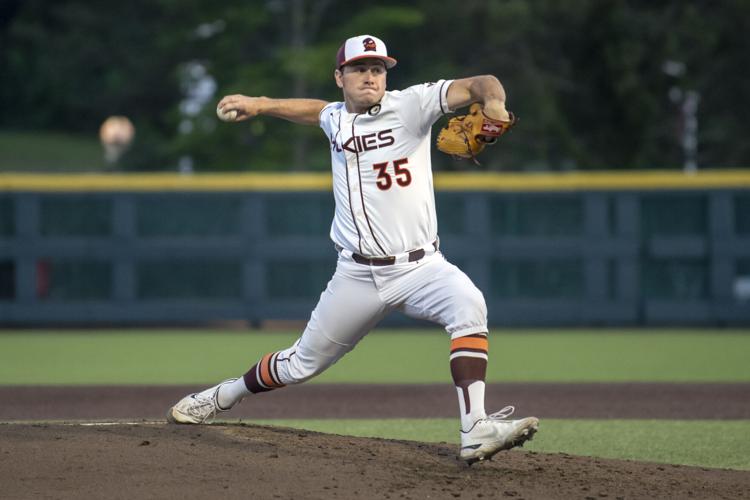 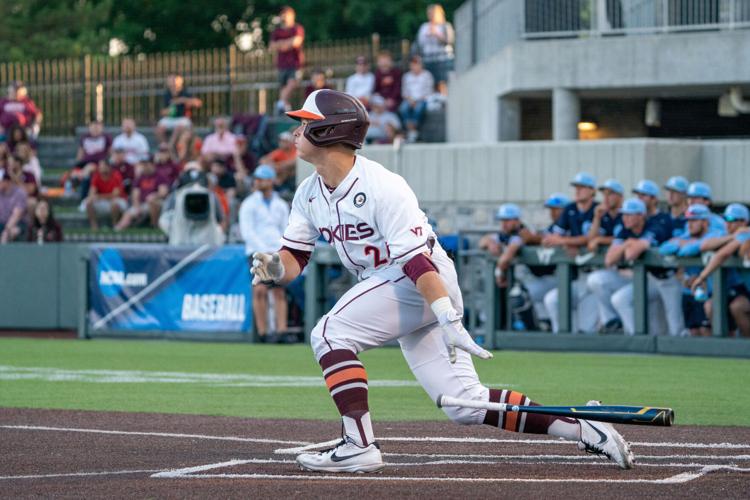 Virginia Tech's Nick Biddison hits an RBI triple in the second inning. He hit a solo homer later in the game. 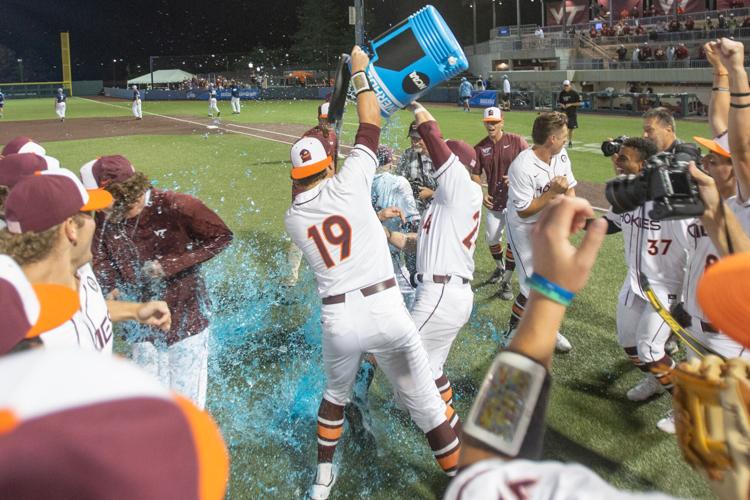 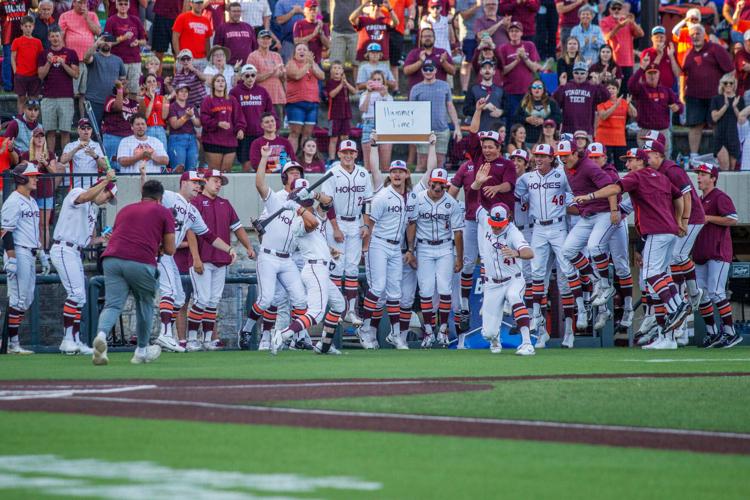 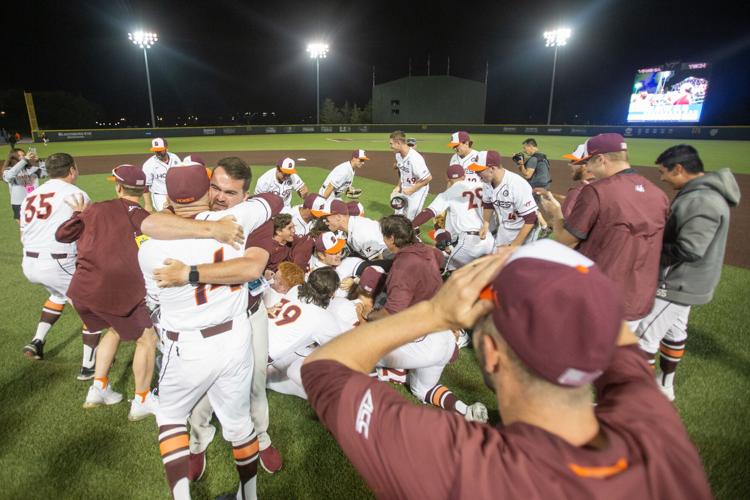 BLACKSBURG — It was arguably the biggest win in Virginia Tech baseball history.

No. 4 overall seed Virginia Tech beat Columbia 7-2 in an NCAA regional final Sunday night at English Field to advance to a Super Regional for the first time in the program’s history.

“We love each other. We go out and fight and just [have] grit.

The Hokies (44-12) celebrated with a dogpile at game’s end. The players then hugged each other.

“It’s pretty special,” said senior Nick Biddison, who had two hits and two RBIs on Sunday. “My first year here [2019], I think we were … second-to-last [in the Coastal Division]. So to see all the work pay off, it’s special.”

The Hokies went 3-0 to win the Blacksburg Regional. Had Columbia (32-19) won Sunday, a second game of the finals would have been necessary on Monday.

This was the first time Tech has ever hosted or won a regional.

“It’s really special to win an NCAA regional,” said John Szefc, who is in his fifth season as Tech’s coach. “I’m just so happy for our players and our coaching staff.

“I’m just really happy that they can enjoy this in Blacksburg together. I’m happy for Virginia Tech, for Blacksburg in general.”

Gavin Cross, who was named the regional’s most outstanding player, and Biddison doused Szefc with a bucket of Powerade after rising from the dogpile.

The poster board of the Blacksburg Regional bracket was brought onto the field. Biddison slapped the “Virginia Tech” sticker on the champion’s line .

“Being here, it meant the world,” Biddison said. “We could’ve gone somewhere else [for the regional], but I’m very glad that we ended it in Blacksburg.”

The Hokies were picked to finish sixth in the seven-team Coastal Division in the ACC coaches’ preseason poll.

“Coming into this year, we were still kind of looked over,” said Carson DeMartini, who hit a three-run homer Sunday. “That’s kind of our motto. We’re always looked over.

“Being able to be a part of this is awesome.”

Virginia Tech will now get to host a Super Regional for the first time.

“The biggest thing about tonight and winning this whole thing is this group of guys gets to stay together … and keep playing and practicing and hanging out and doing stuff,” Szefc said. “This is the time that these guys will not forget for the rest of their lives.

“When [Biddison] is playing in Yankee Stadium some day and whatever else, it’s cool. But talk to [Oakland Athletics outfielder and ex-Hokie] Chad Pinder like we did on Thursday, and all Chad wanted to talk about was his time back here playing in this regional in ’13.

“The next couple days will be something that they’ll be talking about for the next 30 years.”

Unlike Tech, the Lions were playing their second game of the day and their fourth game of the regional. They had beaten Gonzaga in the losers’ bracket final Sunday afternoon.

The Hokies grabbed a 2-0 lead in the bottom of the first when Tanner Schobel belted a two-run homer off Joe Sheets (2-3).

Tech extended the lead to 3-0 in the second on an RBI triple from Biddison.

The Lions cut the lead to 3-1 on an RBI triple by Tyler MacGregor in the third.

But the Hokies broke the game open with back-to-back homers in the fifth.

After Carson Jones walked and Conor Hartigan singled, DeMartini belted a three-run homer off reliever Saajan May with two outs to extend the lead to 6-1.

Two innings earlier, May had struck out DeMartini with the bases loaded.

“He got me out with the pitch I hit out [of the park],” DeMartini said. “I learned from it. I wouldn’t say I knew it was coming, but I had a good intuition it was coming.”

Biddison, the next batter, hit a solo homer to give Tech a 7-1 lead.

Metz shined in his start for Tech, allowing three hits and one earned run in 4 2/3 innings. He struck out four and walked one.

After Metz gave up the RBI triple to MacGregor with two outs in the third inning, he retired Weston Eberly on a fly ball to escape further damage.

Graham Firoved (5-0) threw 2 1/3 innings of relief to get the win. He allowed one hit and one earned run. He struck out five and walked two.

Firoved relieved Metz with a man on first and two outs in the fifth. He struck out Andy Blake to end the inning.

The Lions had men on second and third in the sixth inning, but Firoved struck out Anton Lazits and EJ Kreutzmann to get out of the jam.

After Firoved walked Blake in the eighth, Weycker entered the game. Blake scored later in the inning, but Weycker struck out Sky Selinksy with men on first and second to end the inning.

In the 1969 NCAAs (which also had a different format), Tech beat Furman to again move within two wins of reaching the College World Series. But North Carolina beat Tech in a district semifinal.

Anne Jones and Lynne Krulich completed the 1992 Ironman triathlon in Hawaii and ran the 100th Boston Marathon in 1996.

‘He can be a hell of a corner’: Virginia Tech defensive back Dorian Strong’s next step

Plus Keve Aluma news and more.

New Virginia Tech offensive line coach Joe Rudolph viewed Silas Dzansi as a bit of a "quandary" after working his this spring, but that's not a bad thing...

“Just didn't feel good about it right now,” Details on Virginia Tech letting 2022 signee Rashaud Pernell out of his letter of intent

The Virginia Tech baseball team celebrates with a dogpile after beating Columbia in an NCAA regional final Sunday night.

Virginia Tech senior Nick Biddison rejoices after slapping a “Virginia Tech” sticker on the champion’s line of the regional-bracket poster board after Tech won the Blacksburg Regional.

Virginia Tech's Nick Biddison hits an RBI triple in the second inning. He hit a solo homer later in the game.