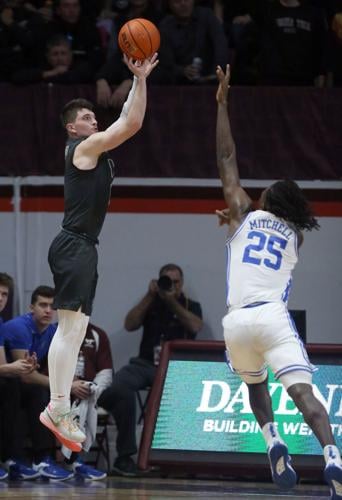 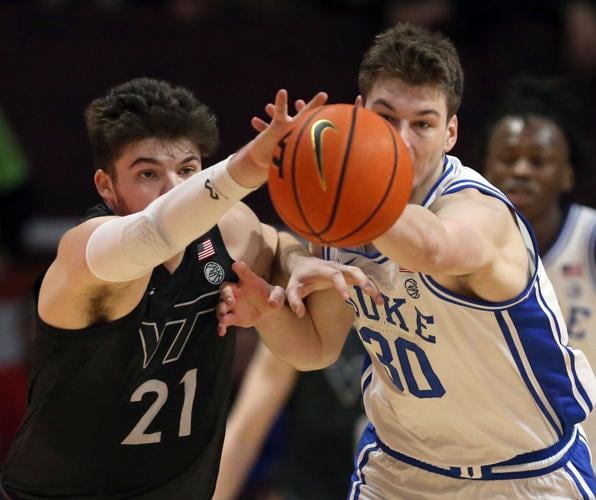 Virginia Tech's Grant Basile (21) and Duke's Kyle Filipowski (30) reach for a tipped ball in the first half. 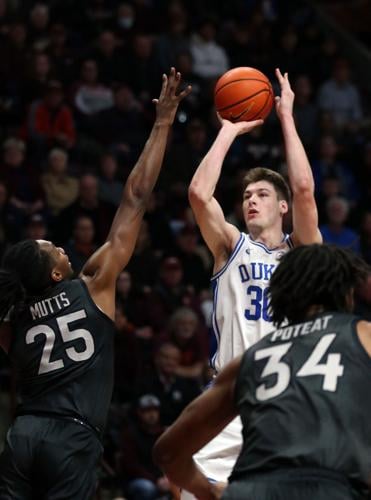 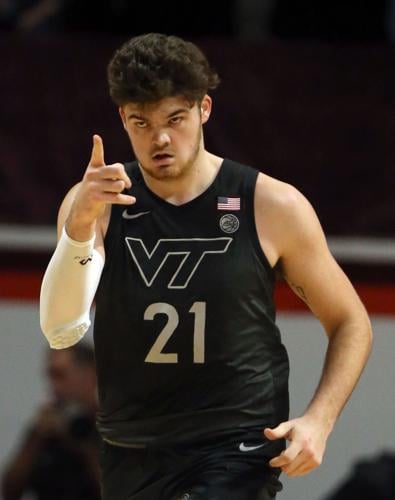 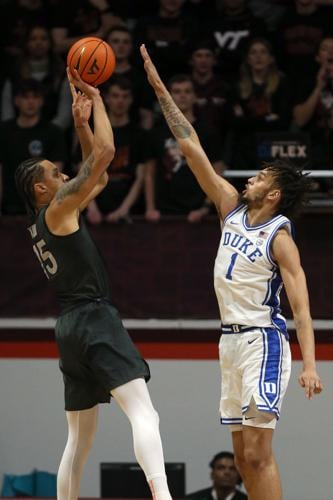 In a "Big Monday" game that was televised by ESPN, Virginia Tech (12-8, 2-7 ACC) ended the program's longest skid in eight years.

Freshman reserve guard MJ Collins made a jumper to give Tech a 77-75 lead with 13.3 seconds to go.

Duke freshman Tyrese Proctor missed a 3-pointer with six seconds left. Collins grabbed the defensive rebound and was fouled. Collins made one of two free throws to extend the lead to 78-75 with 3.9 seconds left.

Tech guard Hunter Cattoor stole the inbounds pass in the waning seconds. He flung the ball in the air at game's end.

Virginia Tech won for the third time in the last four meetings in the series, including its victory in last year's ACC tournament title game at the Barclays Center.

The Blue Devils were first in the "also receiving votes" category of the Associated Press Top 25 poll Monday. This was the first time Tech faced an unranked Duke team since a January 1978 meeting.

Grant Basile had 24 points and eight rebounds for the Hokies.

Virginia Tech point guard Sean Pedulla, who had gone just 2 of 13 from the field in last weekend's loss at Clemson, had 16 points and three 3-pointers Monday.

Duke freshman Ryan Filipowski, a 7-foot center, had a career-high 29 points. He also had 10 rebounds.

Duke, which leads the ACC in rebounding margin, outrebounded Tech 30-27.

Basile scored to cut the lead to 58-55. Filipowski made one of two free throws to extend the lead.

Dereck Lively II dunked and Filipowski made a layup to tie the game at 63.

Four of Duke's starters were at least 6-foot-7, including Filipowski and the 6-10 Young.

Tech coach Mike Young countered with a bigger starting lineup than usual. Lynn Kidd started at center, with Mutts and Basile at the forward slots. Guard Darius Maddox, who was 0 of 6 from the field in last weekend's loss at Clemson, was not in the starting lineup for the first time this season.

Virginia Tech's Grant Basile (21) and Duke's Kyle Filipowski (30) reach for a tipped ball in the first half.