Virginia Tech football coach Brent Pry listens to a question at the ACC Kickoff in Charlotte, N.C., on July 21. 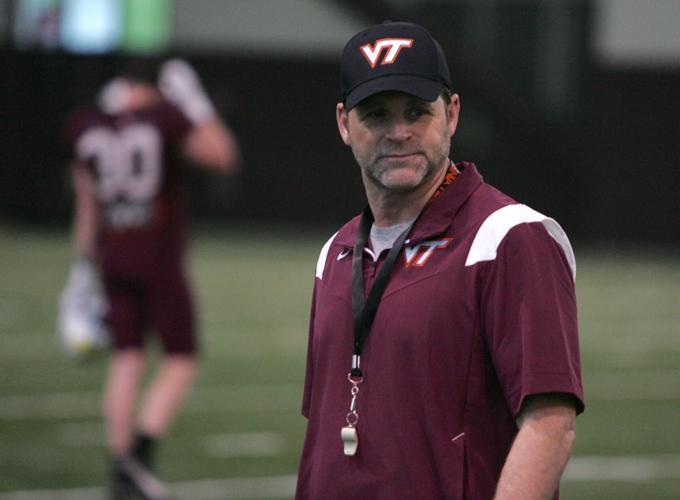 Virginia Tech’s first-year coach spent just shy of three decades as an assistant coach, and all that time spent in the trenches helped him prepare for this moment.

“There’s not a lot of situations I haven’t been through or been around,” Pry said.

It made coming up with a plan for fall camp relatively painless.

Pry sat down with his staff to sort it all out before they took some vacation time in July. They evaluated Penn State’s model and what Virginia Tech did in recent years with Pry inserting some of his own unique ideas into the mix.

The schedule Pry came up with features a series of four-day mini-camps with a day off after each one and two scrimmages mixed in after the first phase.

“I don’t want to talk about one day,” Pry said. “What do we need to accomplish in this first phase or first cluster? This first little mini-camp? I think it’s a good way to break it down, and we can evaluate each of them as coaches and players.”

It’s a similar way Pry referred to the team’s offseason plans with the winter workouts being phase one, spring camp as phase two, summer conditioning as phase three and fall camp being the final phase.

One change Pry made from how the previous staff scheduled fall camp was to move practices later in the day. The media availability schedule Tech announced on Friday had practices starting around 4 p.m.

That also marks a change from spring camp.

“I wanted the guys to sleep in a little more,” Pry said. “That was important to me because no matter what, a large majority of them are going to stay up. These are [18- to 19-year-olds], they are going to play video games. I want them to have the opportunity to sleep as much as we are going to demand of them.”

Virginia Tech opened up practice on Friday afternoon, here's some observations from the portions of practice open to the media...

Virginia Tech's 2022 fall camp is underway and we were at a portion of Wednesday's practice, here's what we saw...

In the region: Draft pick commits to Virginia Tech

Virginia Tech is having 'daily discussions' about what to do with open scholarship spot...

Virginia Tech is eager to see how they can put Connor Blumrick's skillset to use this fall...

Virginia Tech football coach Brent Pry listens to a question at the ACC Kickoff in Charlotte, N.C., on July 21.