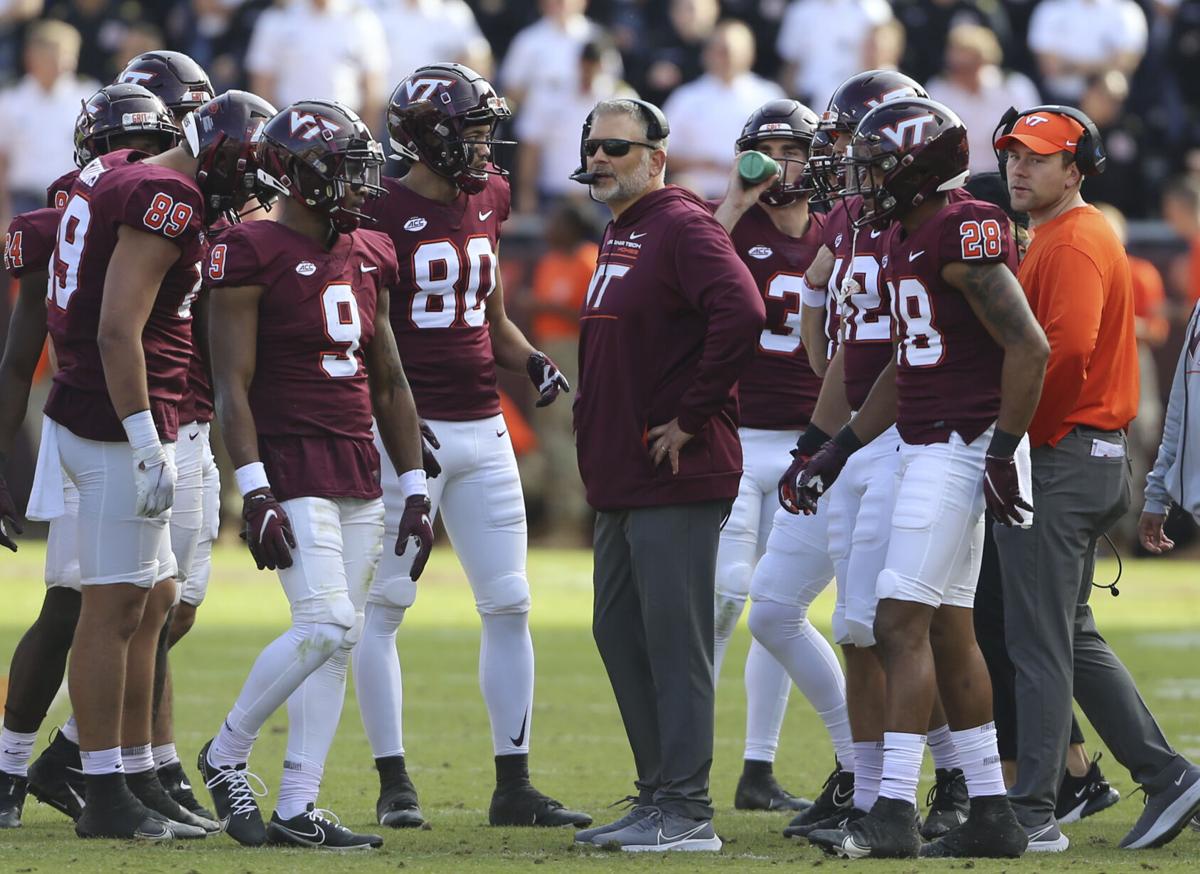 Virginia Tech head coach Justin Fuente huddles with his team in the final minutes of Saturday’s game against Syracuse. 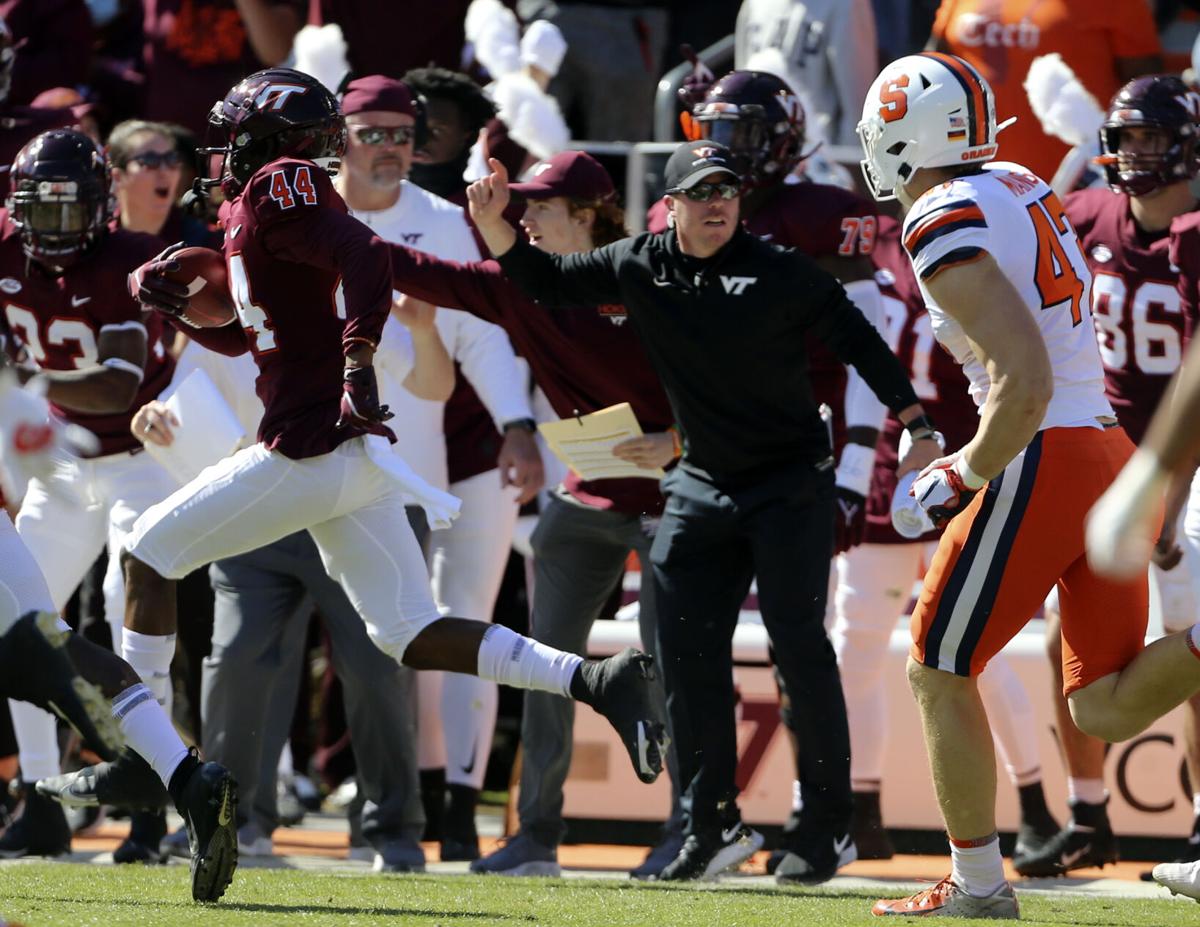 Virginia Tech defensive back Dorian Strong (left) runs for a score after a blocked Syracuse field goal attempt on Saturday.

The Hokies late game collapse on Saturday came after they were leading Syracuse — a team that had lost its last 10 conference games — by nine points with less than six minutes to go.

Syracuse quarterback Garrett Shrader completed the comeback with an unlikely 45-yard bomb to Damien Alford in the final seconds. According to Pro Football Focus, Shrader was 4 of 24 on passing attempts of 20 yards or more coming into the game and nearly had as many interceptions (two) as completions.

He was 1 of 7 on deep throws before the touchdown.

“That’s the third one on essentially the last play of the game that we’ve had this year,” Fuente said.

Those one-possession losses this year have made for some emotional Sunday workouts and film review sessions, and this week was no exception.

“I think we have a group of young people that deeply care about Virginia Tech and maybe more importantly care about each other,” Fuente said. “And they have strained and held on tight and done everything that they can to try to get rewarded for their effort, and we’ve come up a little bit short three times.”

Fuente still struck an optimistic tone when talking about the locker room, and the team’s overall mental toughness. It helps that Fuente has a group of leaders that includes a veteran group of captains (linebacker Dax Hollifield, safety Chamarri Conner and offensive linemen Brock Hoffman and Tyrell Smith) and members of the leadership council helping keep everyone together.

“They keep coming back and battling their tails off,” Fuente said.

As for that loss on Saturday, Fuente lamented a pair of costly miscues down the stretch starting with a rare special teams gaffe.

Tech allowed a 51-yard kick return from Syracuse wide receiver Trebor Pena after taking a 36-27. The Hokies only allowed four returns all season for 78 yards. It was the first kick returned past the 50-yard line against Fuente in his entire career as a head coach.

“Our confidence in that unit has just been sky high for a long, long time,” Fuente said. “And it was disappointing that the finer detail that we did not execute, which was taking air out of the return, and it ultimately cost us.”

The other play was Shrader’s touchdown throw.

Fuente declined to comment on the play after the game other than to say Shrader made a nice throw in the face of significant pressure. He was a little more forthcoming on Monday.

“The biggest thing was we were supposed to check the coverage,” Fuente said. “We didn’t get it checked. So, we were not in the coverage that we wanted to be in, that the coaches had made the adjustment or gotten coached up to get done. That was the biggest takeaway from that.”

“We’re asking them to continue to hold and strain, knowing that the rewards are coming,” Fuente said. “And hopefully we’ve got a chance to be rewarded this week.”

Virginia Tech tunes up for Memphis with rout of Merrimack

Can Virginia Tech's secondary rebound in the Commonwealth Cup after season-worst performance?

A look at how Virginia Tech interim coach J.C. Price viewed the secondary's struggles against Miami and what the defense needs to do against UVA to improve

Virginia Tech head coach Justin Fuente huddles with his team in the final minutes of Saturday’s game against Syracuse.

Virginia Tech defensive back Dorian Strong (left) runs for a score after a blocked Syracuse field goal attempt on Saturday.