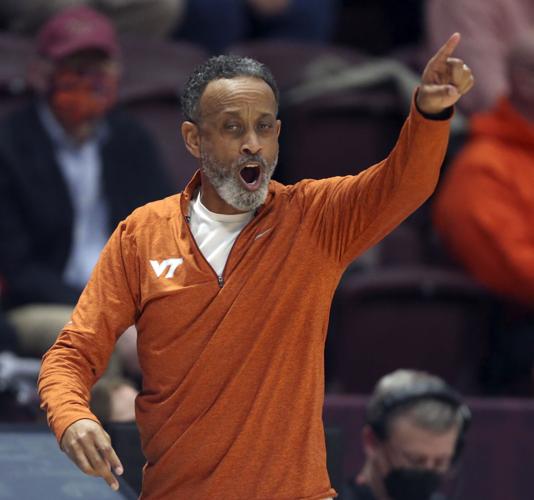 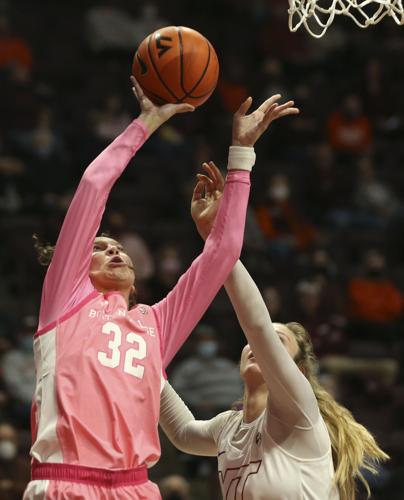 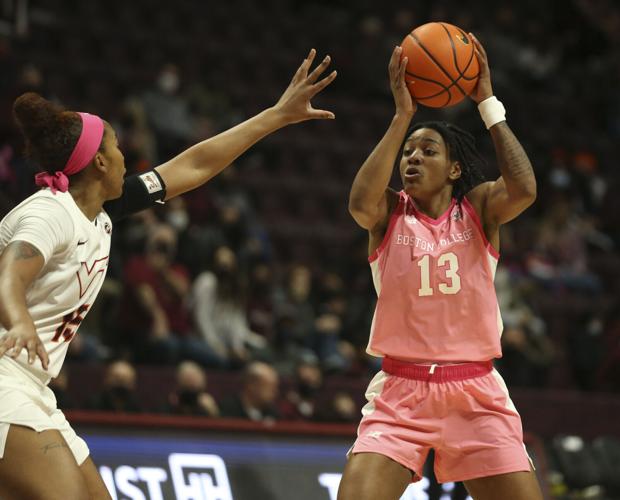 After signing not one but two standout transfers earlier this month, the Virginia Tech women’s basketball coach figures his restocked team will once again be able to make a splash.

“I’m very excited,” Brooks said Tuesday on a video conference. “We had a tremendous transfer-portal season.

“It gives us an opportunity to compete in the ACC. … We’ve gotten to the point that we’re competing for ACC championships. We’re competing for [NCAA tournament] seeding now — not just trying to get into the dance but how can we get a great seed so we can progress?

“So I’m very happy. I thought we did a tremendous job adding scoring.

“A new look to go with the old group, but I think it’s going to blend very nicely.”

“We had probably one of the better years of anybody in the country in the portal,” Brooks said. “This just really gives us an opportunity to go out and compete for a [conference] championship.”

Tech will be returning three starters — third-team All-American center Elizabeth Kitley, point guard Georgia Amoore and off-guard Cayla King — from a team that went 23-10 overall and tied for third place in the ACC with a 13-5 league mark. The Hokies, who were ranked No. 16 in the final Associated Press Top 25 poll, reaped a No. 5 seed in the NCAA tournament but lost in the first round.

Owusu will succeed Tech career scoring leader Aisha Sheppard, who is now a rookie with the WNBA’s Las Vegas Aces, at the other off-guard spot.

The 6-foot Owusu earned third-team All-America honors as a sophomore in the 2020-21 season, when she averaged 17.9 points, 5.9 assists and 5.6 rebounds. She won the Ann Meyers Drysdale Award that year as the top off-guard in the country.

Sheppard broke the ACC record for career 3-pointers, but Owusu is not a prolific outside shooter. Owusu attempted only 32 3-pointers this year, making 13 of them.

“[Owusu] shoots the 3 well. It’s just that she has many more elements to her game than probably Aisha did,” Brooks said. “She’s a great facilitator. She can get into the lane. She’s very strong. She’s very crafty.”

Brooks expects Owusu, who has two years of eligibility left, to mesh well with Amoore.

“Georgia will be the first one to welcome the addition of Ashley … helping with the ball-handling responsibilities,” Brooks said. “So many people would just focus on Georgia for 94 feet that it kind of wore her down. … She’ll be a much more effective player, scorer, now that Ashley’s in the backcourt with her.

“We made it very clear to both of them that they would both have the ball in their hands and they both welcomed it.”

“I’ve known Ashley Owusu since she was in the eighth grade,” Brooks said. “We recruited her when I was at James Madison and when I came here.”

The 5-11 Soule, who will be joining Tech as a graduate transfer, is a three-time All-ACC second-team pick. She averaged 16.0 points and 5.5 rebounds as a senior this year. She made only two 3-pointers this year. But she has scored 1,522 career points and has grabbed 671 career rebounds.

“Taylor is a downhill player, much more athletic than where we’ve been normally with the [power forward position], and she can really clean up on the glass,” Brooks said. “With so much attention that’s going to be on our guards or even on Elizabeth inside, Taylor will be able to run free a little bit and be able to capitalize on that.”

Soule will replace forward/guard Azana Baines, who has transferred to Seton Hall, in the starting lineup.

“She’s so athletic getting downhill, crafty, plays through contact and she’s a passer,” Brooks said. “Her motor is extremely high.”

“That defensive stopper that we really haven’t had,” Brooks said. “She might get 12 points a game but she’s probably going to defend the heck out of the basketball on the defensive end and rebound for us and add that we desperately need to be an elite program.”

The 6-3 Ford, who signed with Tech last month, also will be joining the Hokies as a graduate transfer for her extra year of eligibility.

She averaged 2.2 points, 1.3 rebounds and 6.1 minutes as a BC senior reserve this year.

“Gives us depth inside, which we didn’t have last year,” Brooks said.

And then Ford persuaded her best friend, Soule, to also make the move from BC to Tech.

With the additions of Soule and Owusu, Tech boasts five players who averaged double figures in points for their college teams this year, including Kitley (18.1 ppg), Amoore (11.2 ppg) and Kayana Traylor (10.4 ppg).

Tech probably won’t make as many 3-pointers as it did this year because of the departure of Sheppard, but it should still have a dangerous attack.

“We’ll be able to score more efficiently and we probably will be more prolific,” Brooks said.

Kaleb Smith, Virginia Tech’s top wide receiver in 2022, announced on social media Monday that he is entering the transfer portal, part of a bu…

"Virginia Tech is a force in the ACC," Justyn Mutts said.

Virginia Tech women rise to program-best No. 7 in poll

But Ashley Owusu will have surgery Tuesday.

"It's even hard to fathom, limiting North Carolina … to 59 points," Mike Young said of his team's ACC semifinal win over UNC.

BLACKSBURG — With only one returning All-ACC player — punter Peter Moore was a third-team selection last year — this figured to be a lean football season at Virginia Tech. But few anticipated just how lean.

Amoore gets triple-double in No. 9 Virginia Tech's win over Nebraska

BLACKSBURG — Suspend current reality for a moment. Set aside that North Carolina’s men and Tennessee’s women are a combined 9-9 this basketball season and in varying degrees of distress.

Rematch with Dayton up next for Virginia Tech men

Dayton led Tech for the entire second half in last year's meeting.

The head coach said he has more than 30 meetings planned this week with individual players who have decisions to make on their futures.

Five players who have played at five World Cups