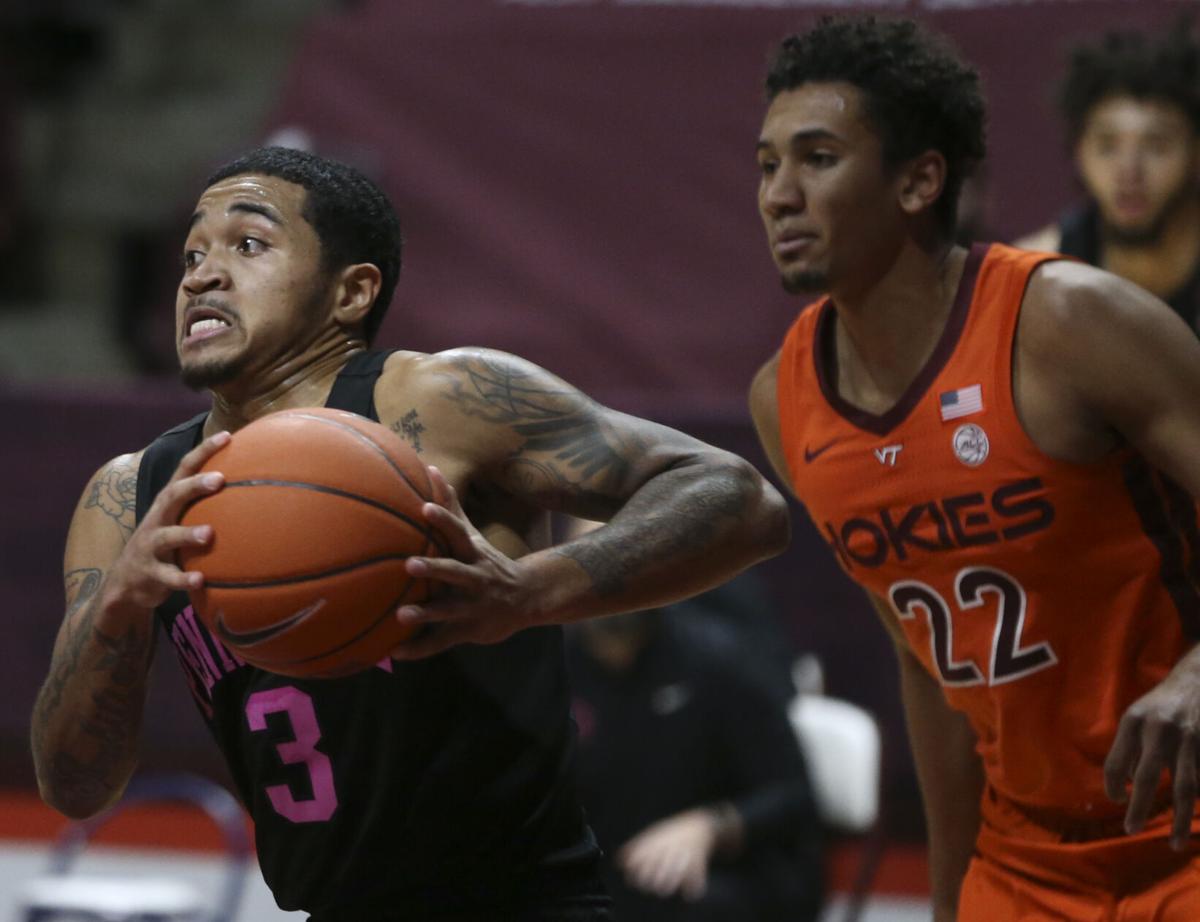 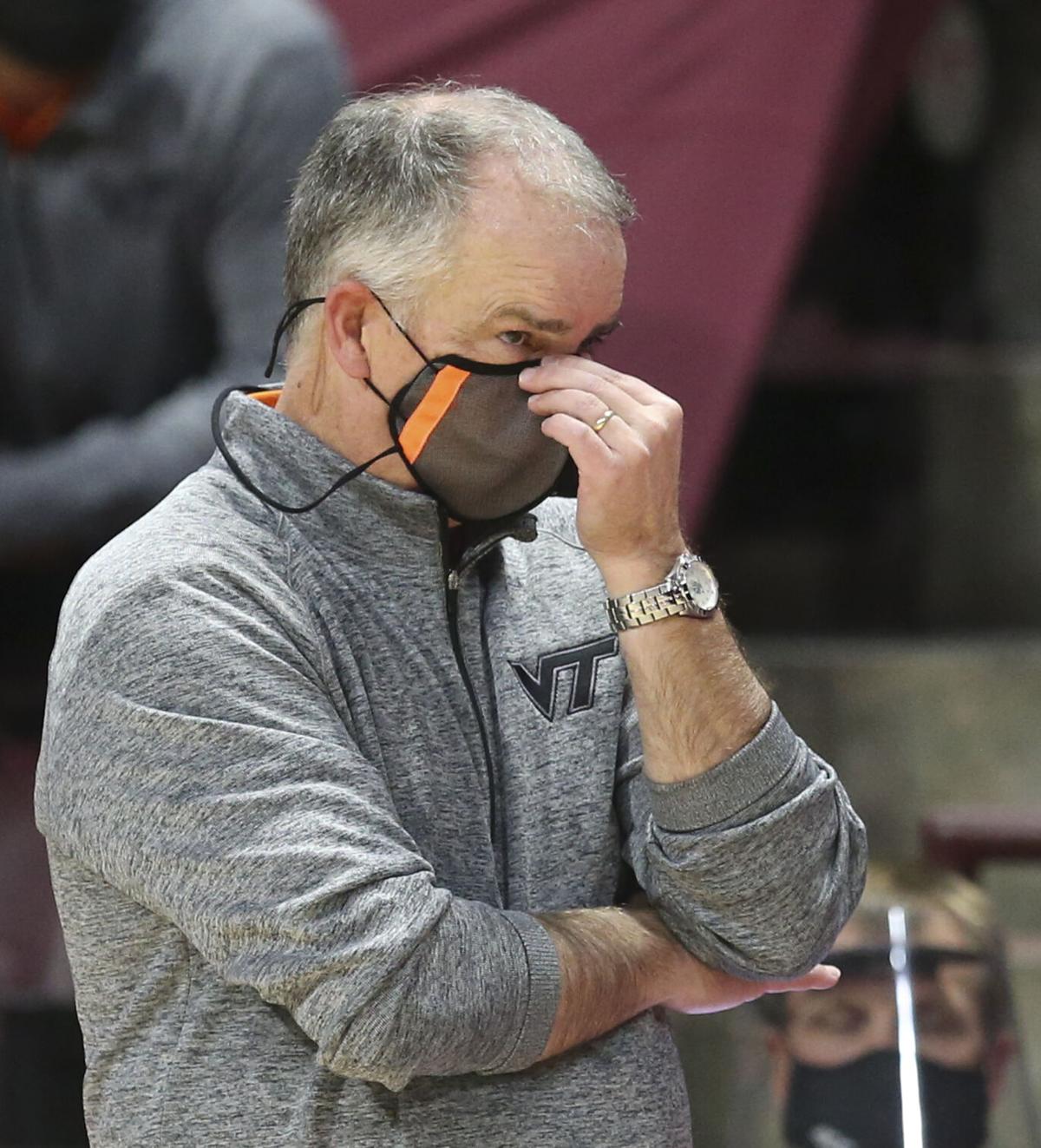 Virginia Tech coach Mike Young looks on during the Hokies' loss to Penn State. His team trailed by as many as 29 points. 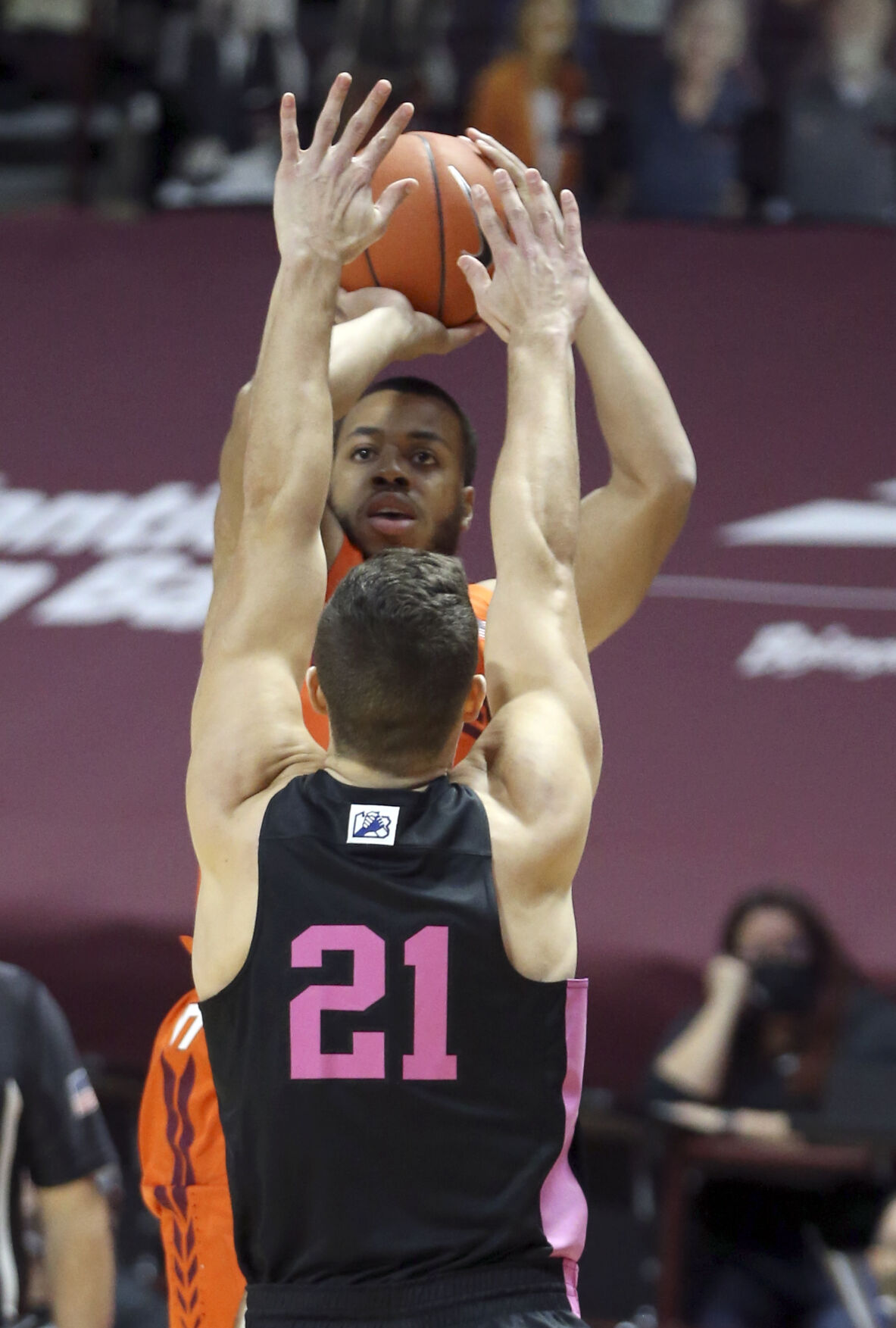 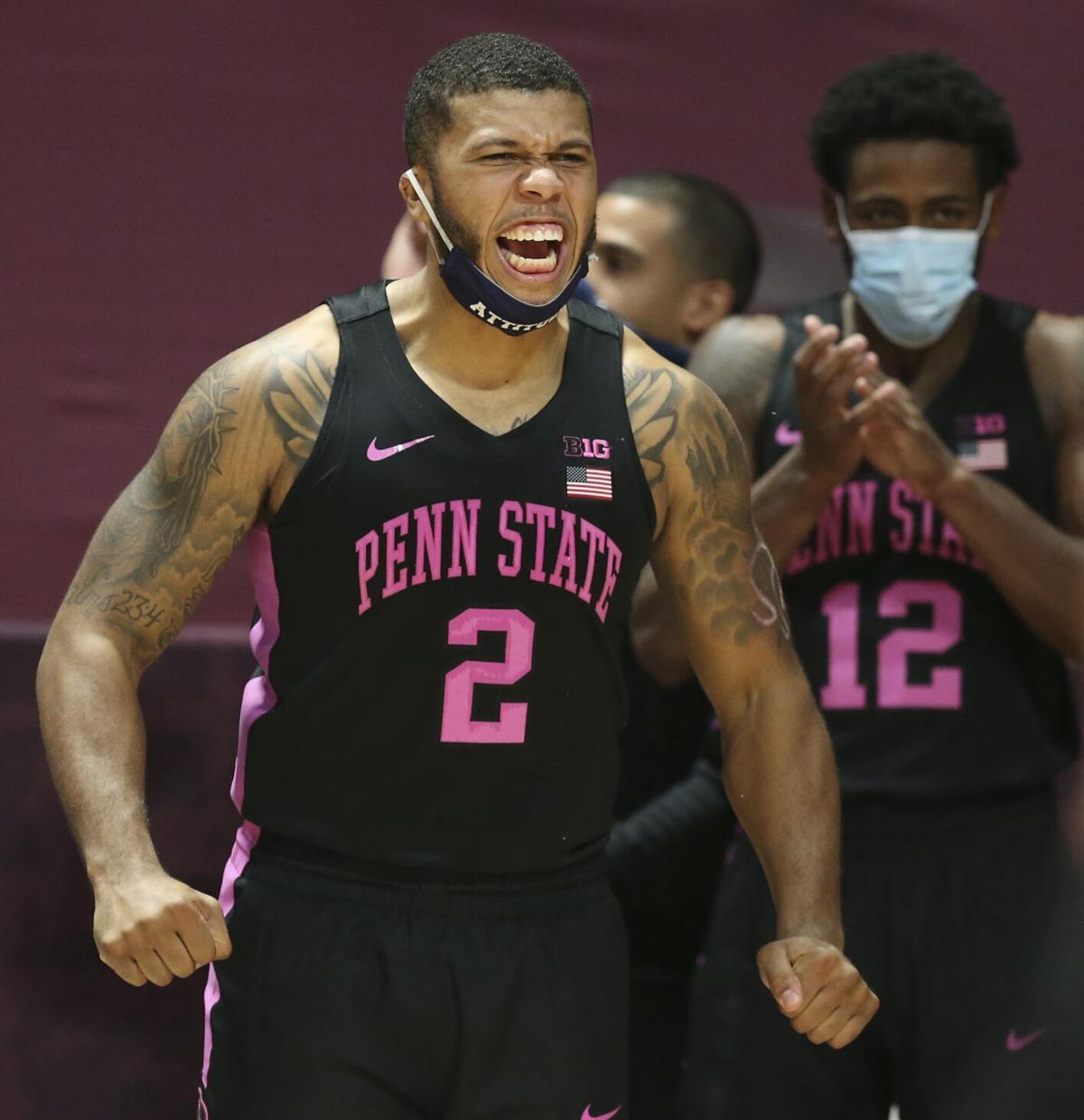 Penn State's Myles Dread and Izaiah Brockington (right) celebrate a basket in the second half of Penn State's win. Dread had 11 points, and Brockington scored a career-high 24 points. 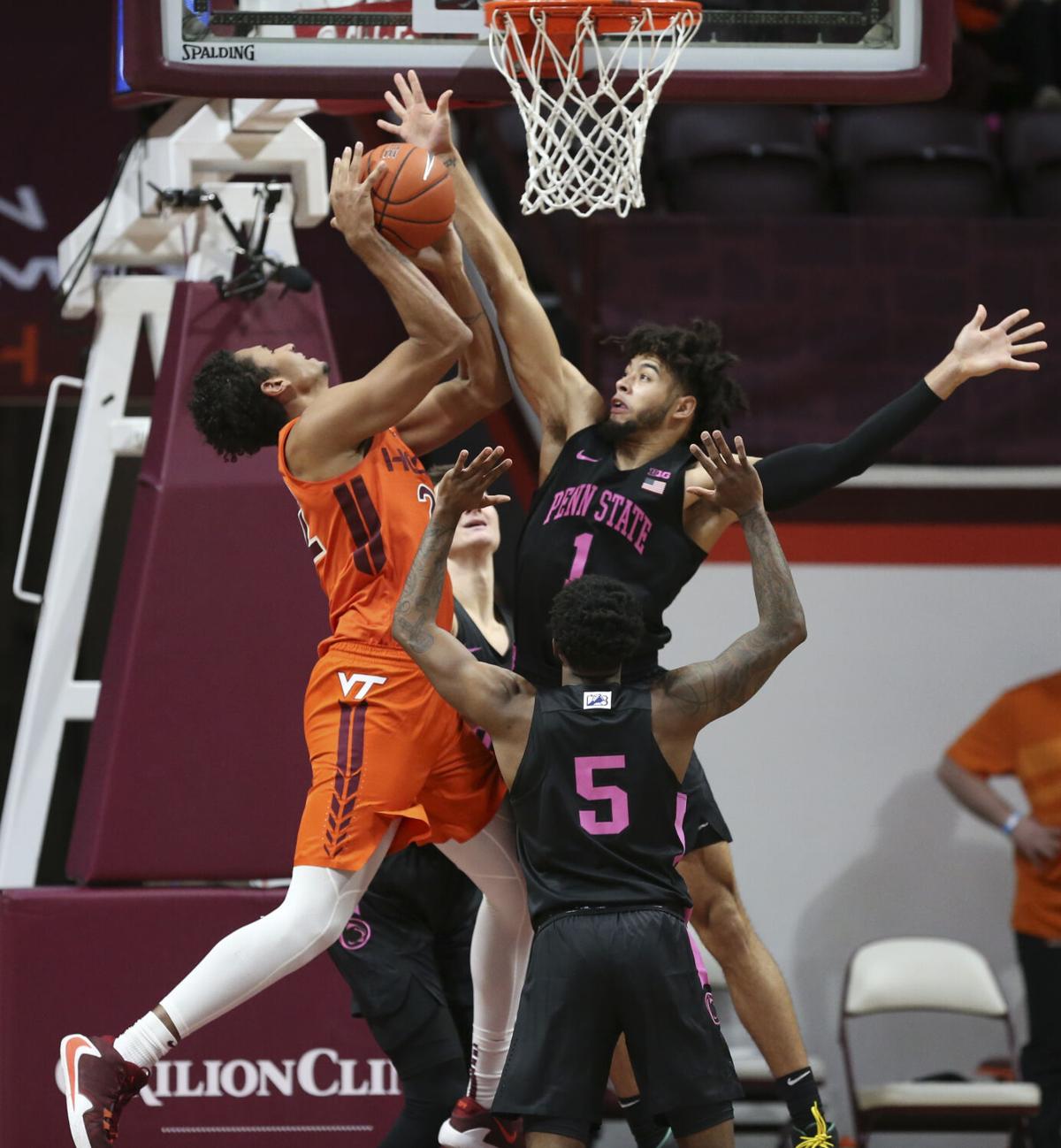 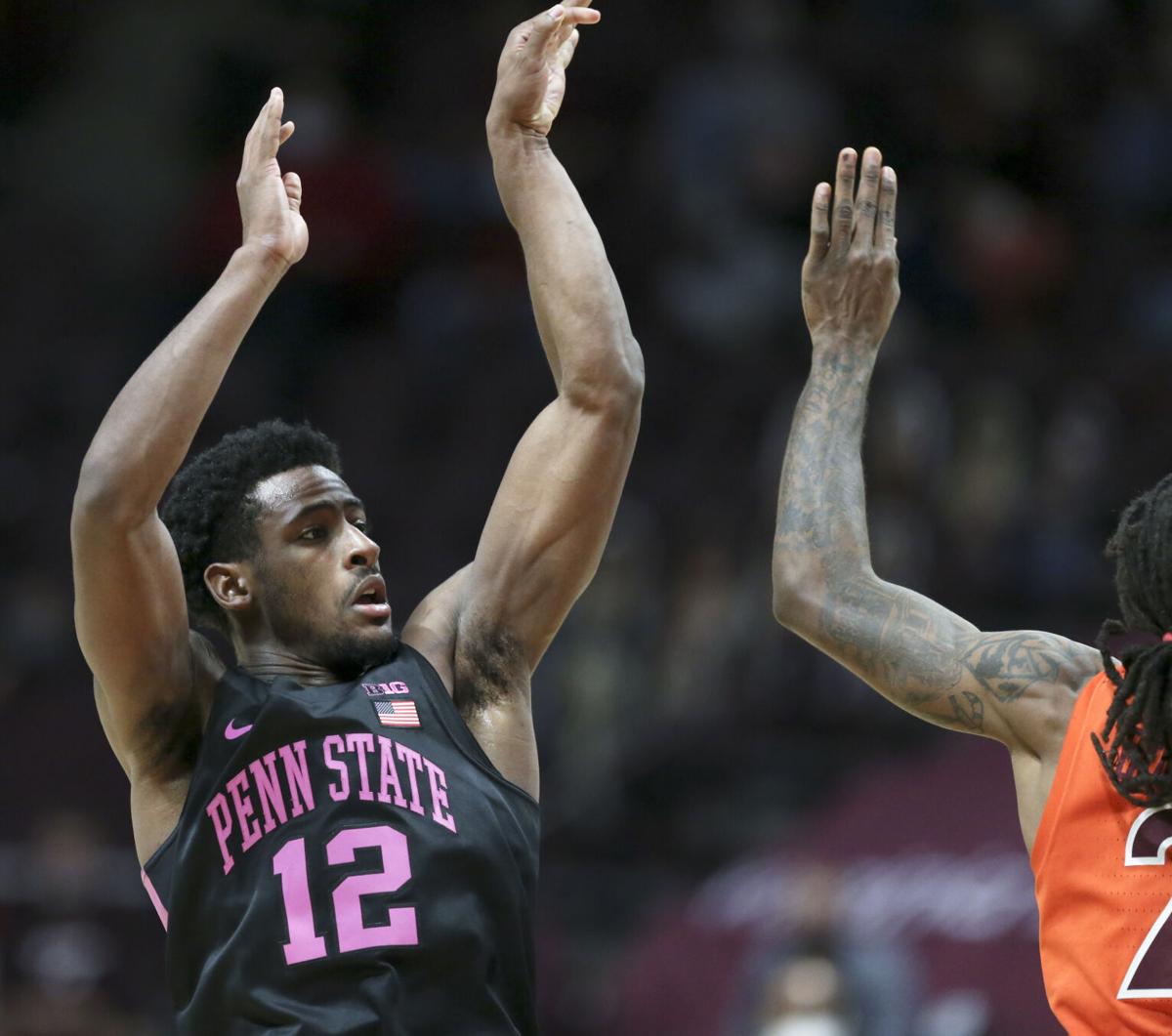 Penn State's Izaiah Brockington (left) follows through on a 3-point shot in the team's win at Virginia Tech. He had a career-high 24 points. 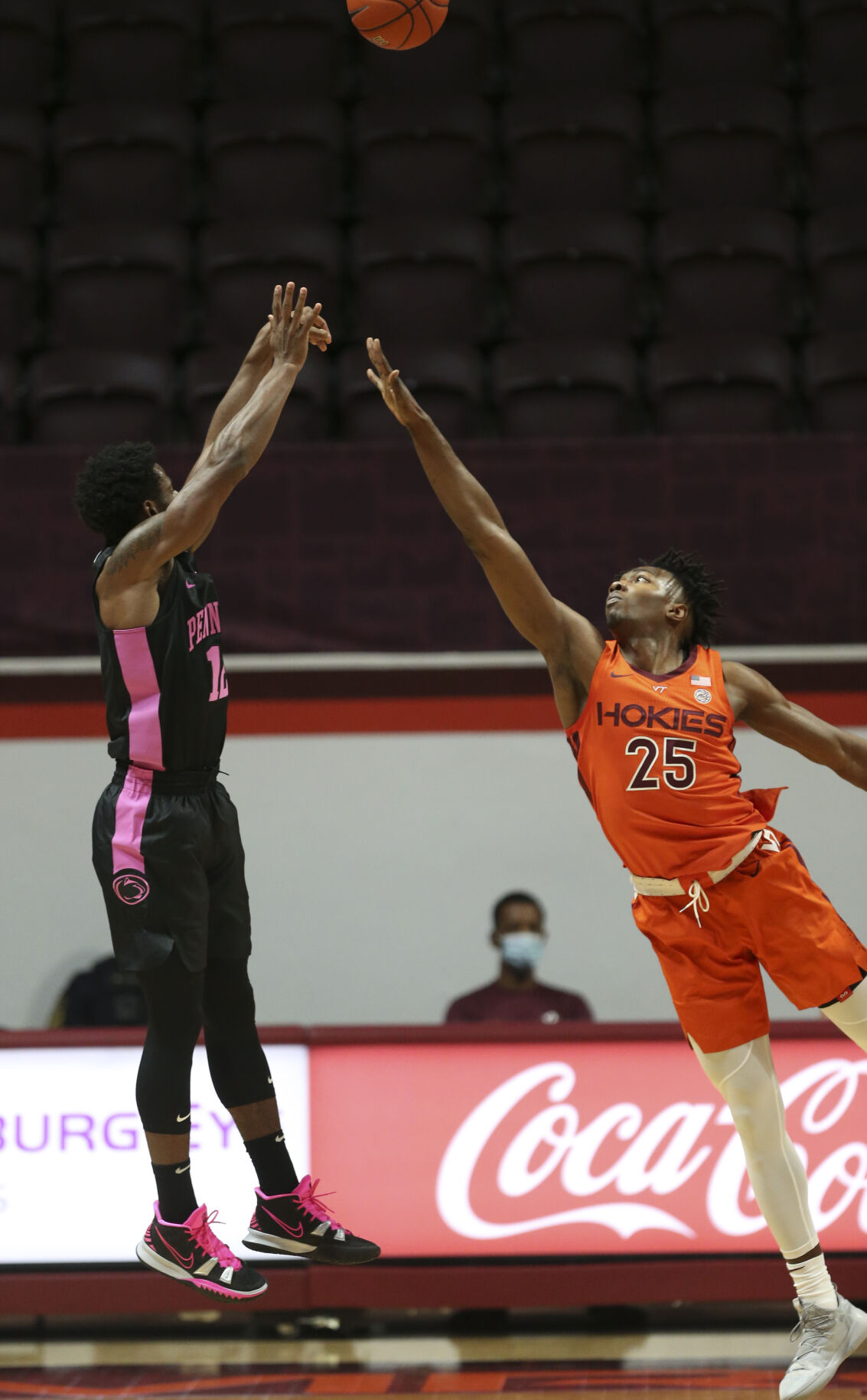 Penn State cruised past the 15th-ranked Hokies 75-55 in the Big Ten-ACC Challenge on Tuesday night at Cassell Coliseum.

"Penn State came in here and flattened our nose. And did it so early," Tech coach Mike Young said. "Surprised. Disappointed in our response."

Tech (4-1) suffered its most lopsided home defeat since a 78-52 loss to Virginia in January 2018, when Buzz Williams was the Hokies' coach.

"They got us back on our heels … on both ends," Young said. "Banging shots left and right. Our shot contestment wasn't good.

"We find ourselves reeling and [Penn State's] 1-2-2 [pressure defense] slowed us down offensively. We had a hard time getting into a rhythm there.

"They popped us right in the mouth and we didn't respond very well."

"We're known for playing fast, and people talk about that on offense all the time. … I felt we needed to play fast defensively today. … We used our speed and athleticism to really guard them all over the floor tonight, and I thought that was the biggest key to the game."

The Nittany Lions kept their lead this time.

The Hokies trailed by 19 points at halftime and by as many as 29 points in the second half.

"We talked about it. … If this game is an AAU game, up and down, and quick shots, poor ball-handling, that is not going to bode well for our team," Young said. "This has got to be longer possessions, hitting one and two sides of the floor each time, playing through Keve [Aluma] in the post. We didn't have that.

"Everything they throw in the air seems like it's going in the hole. But that's not the basketball gods. That's Virginia Tech's defense. We weren't nearly as good on that end as I've come to expect."

Junior guard Izaiah Brockington had a career-high 24 points for Penn State, which shot 50% from the field.

"We were letting them shoot right in our face," Tech point guard Wabissa Bede said. "A lot of those 3s weren't contested."

"They crawled right up under us," Young said of the Penn State defense. "Our shot selection was not very good at all. I'm shocked.

"We fell into the old trap; we wanted to get it all back in one shot. And that's not the way it plays out.

"Their pressure and their tenacity on the defensive end contributed to some of that."

The Hokies struggled offensively for the second straight game.

"Our numbers are all out of whack — eight assists and 14 turnovers," Young said.

In the first half, Tech had 10 turnovers and Penn State none.

"We chart deflections. We chart contested passes. And we weren't good enough," Young said of of his defense not forcing turnovers.

Penn State won even though its leading scorer this season, Seth Lundy, had no points. He entered the game averaging 22.3 points. Lundy played just nine minutes in the first half because of foul trouble.

Virginia Tech was shooting just 12.5% from the field and was 1 of 6 from 3-point range at that point. Tech had five turnovers at that point.

"We were trying to tell ourselves not to play like that — play our style," Bede said. "I blame myself as the leader of the team.

"We're not good that way. We're great at our style and our pace. When we try to play like them, you can see in the first six minutes, it didn't go well for us.

"I need to control the pace a lot better.

"We weren't spreading them out, moving the ball side to side."

Penn State led 42-23 at halftime. The Hokies had more turnovers (10) than baskets (nine) in the first half.

Reserve guard Jalen Cone had 11 points off the bench for Tech, which fell to 0-4 against Penn State in the Big Ten-ACC Challenge.

Tech reserve Hunter Cattoor, who has been dealing with strep throat, played less than a minute.

Virginia Tech tunes up for Memphis with rout of Merrimack

Virginia Tech coach Mike Young looks on during the Hokies' loss to Penn State. His team trailed by as many as 29 points.

Penn State's Myles Dread and Izaiah Brockington (right) celebrate a basket in the second half of Penn State's win. Dread had 11 points, and Brockington scored a career-high 24 points.

Penn State's Izaiah Brockington (left) follows through on a 3-point shot in the team's win at Virginia Tech. He had a career-high 24 points.