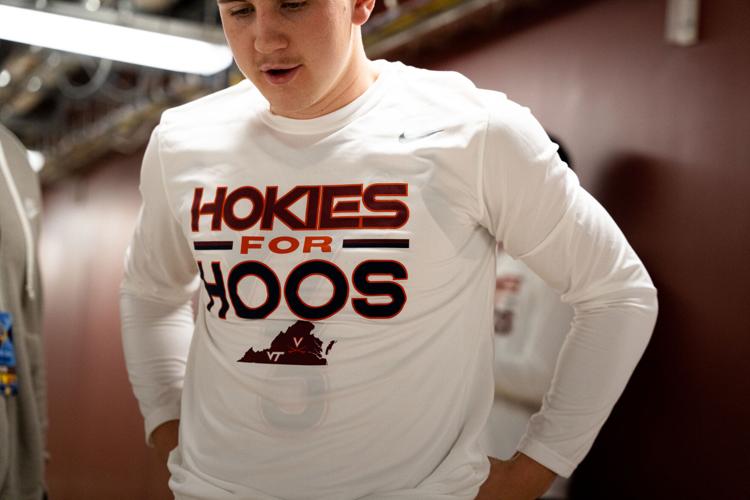 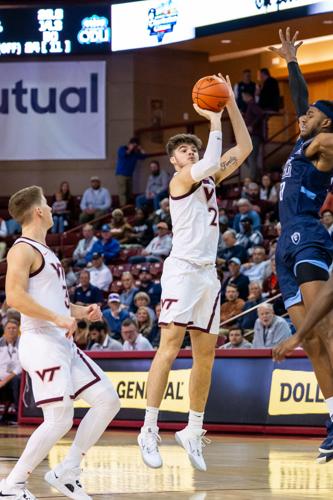 Virginia Tech’s Grant Basile (center) puts up a 3-pointer during Thursday’s game against ODU as teammate Sean Pedulla (left) looks on. Basile had 15 points and three 3-pointers off the bench. 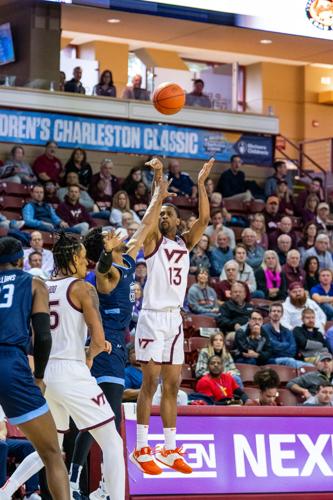 Darius Maddox (center) had 12 points for Virginia Tech in Thursday’s win over ODU. He made two key 3-pointers in the second half. 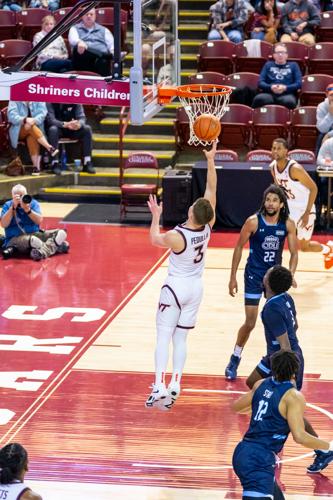 Sean Pedulla, shown making a layup, had 18 points and seven assists in Virginia Tech's win over ODU on Thursday. 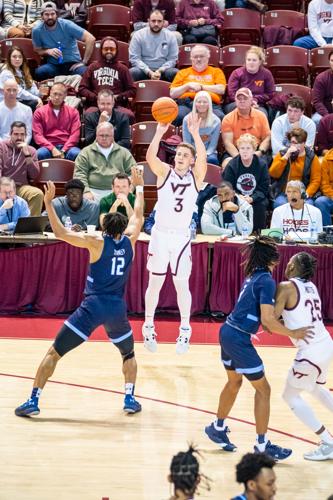 Sean Pedulla, shown putting up a 3-pointer, had 18 points, seven assists and two 3-pointers in Virginia Tech's win over ODU on Thursday.

CHARLESTON, S.C. — The Virginia Tech men’s basketball team led Old Dominion by 20 points in the first half and by 16 points in the second half.

But this game was no blowout. The lead got down to two points with eight seconds left.

The Hokies won a game by single digits for the first time this season, fending off ODU 75-71 on Thursday afternoon in the first round of the Charleston Classic at TD Arena.

“In the second half, we obviously didn’t play very well,” said Tech center Grant Basile, who had 15 points and three 3-pointers off the bench. “We let them back into the game. We just need to continue to bring it.”

But Virginia Tech (4-0) never lost its lead in the second half.

“We had some guys that we rely on … that had not played very well, but they rose up and made big plays when we needed it most,” Young said. “So encouraged by that. We’ll get a lot out of that experience that maybe we wouldn’t have had we beaten them [by] 20, 24, which it looked like where it was headed.”

Virginia Tech will meet Penn State (4-0), which fended off Furman 73-68 in the first game of the day, in a semifinal at noon Friday.

“[Tech has] good shooters that were looking for each other,” said Tech point guard Sean Pedulla, who had 18 points and seven assists. “We just trusted the offense and continued to hit big shots.”

“In the first half, our execution was woeful,” Monarchs coach Jeff Jones said. “In the second half, … the fact that we shot better was due to we had more ball movement and people movement. … If you’re moving, the [defensive] help isn’t locked in.”

“They were hitting some tough shots [in the second half], but we had some defensive busts,” Basile said.

“We kept going to those offensive boards,” Jones said. “That’s one thing I know that we can count on. We’ve got aggressive guys, athletic guys.”

The Hokies shot 48.4% from the field in the first half but only 40% in the second half.

“In the second half, … they didn’t shoot as high a percentage, … [so] we didn’t have to face a set defense each time down,” Jones said.

Neither of Tech’s top two ball-handlers, Pedulla and Hunter Cattoor, played in the final 1:58 of the first half because each had two fouls. Down 39-19 with 1:35 to go in the half, ODU scored the final six points of the half. Tech turned the ball over twice in the final minute of the half.

“We could’ve put them away … at the end of the first half,” Basile said. “We’ve just got to put teams away then so we don’t have to play in close games.”

Wichita State transfer Chaunce Jenkins, who had 24 points off the bench for ODU, later made a 3-pointer to cut the deficit to 63-56. But Maddox answered with another 3-pointer.

“Maddox hit two gigantic shots,” Basile said. “That’s the type of player he is. He’s ready for that moment.”

Jenkins made a layup to cut the lead to 66-58, but Pedulla answered with a jumper.

The Monarchs scored six straight points to trim the lead to 70-66 with 35.3 seconds left. Pedulla made one of two free throws to extend the lead.

Mylyjael Poteat grabbed a defensive rebound, was fouled and made two free throws to extend the lead to 73-66 with 18.9 seconds to go.

“That was a ginormous rebound,” Basile said.

But Cattoor (10 points) made two free throws with 5.3 seconds left to seal the win.

Basile came off the bench for the first time this season. Young opted to start Lynn Kidd at center instead.

The Tech players wore “Hokies for Hoos” T-shirts in pregame warmups in the wake of Sunday night’s fatal shootings at Virginia.

Notes: The Nittany Lions beat Furman 73-68 in Thursday's opener of the Charleston Classic. Seth Lundy and Jalen Pickett each had 20 points for Penn State. Each team made 11 3-pointers. Penn State led 46-29 at halftime, but Furman shot 51.9% from the field in the second half to Penn State's 35.7%. Furman's Tyrese Hughey made a 3-pointer to cut the lead to 69-68 with 1:48 left, but Lundy answered with a jumper with 1:23 to go. After Furman missed three 3-pointers, Lundy made two free throws with six seconds left to seal the win. … Penn State has also beaten Winthrop, Loyola (Md.) and Butler. … Penn State made a school-record 18 3-pointers against Winthrop. … Pickett had the second triple-double in Penn State history in the win over Butler. … Penn State has won the last three meetings with Tech, including a 75-55 win in Blacksburg in December 2020.

"We weren't real good on either end. But those guys came in here to fight, and fight they did," Mike Young said.

Virginia Tech’s football season was one game shorter than expected — two, if you came into the year thinking the team would make a bowl — but …

The head coach said he has more than 30 meetings planned this week with individual players who have decisions to make on their futures.

The Hokies led the entire second half.

BLACKSBURG — With only one returning All-ACC player — punter Peter Moore was a third-team selection last year — this figured to be a lean football season at Virginia Tech. But few anticipated just how lean.

Amoore gets triple-double in No. 9 Virginia Tech's win over Nebraska

BLACKSBURG — The “no-bounce” segments of Virginia Tech’s basketball practices are about to get more intense. Excessive dribbling is decelerating an offense that prides itself on textbook ball movement, and Hokies coach Mike Young is visibly frustrated.

No. 11 Virginia Tech cruises past Longwood

Tunisia our inspiration says USA captain ahead of Netherlands match

Study: Caffeine can improve the performance of sprint runners

Study: Caffeine can improve the performance of sprint runners

Virginia Tech’s Grant Basile (center) puts up a 3-pointer during Thursday’s game against ODU as teammate Sean Pedulla (left) looks on. Basile had 15 points and three 3-pointers off the bench.

Darius Maddox (center) had 12 points for Virginia Tech in Thursday’s win over ODU. He made two key 3-pointers in the second half.

Sean Pedulla, shown making a layup, had 18 points and seven assists in Virginia Tech's win over ODU on Thursday.

Sean Pedulla, shown putting up a 3-pointer, had 18 points, seven assists and two 3-pointers in Virginia Tech's win over ODU on Thursday.