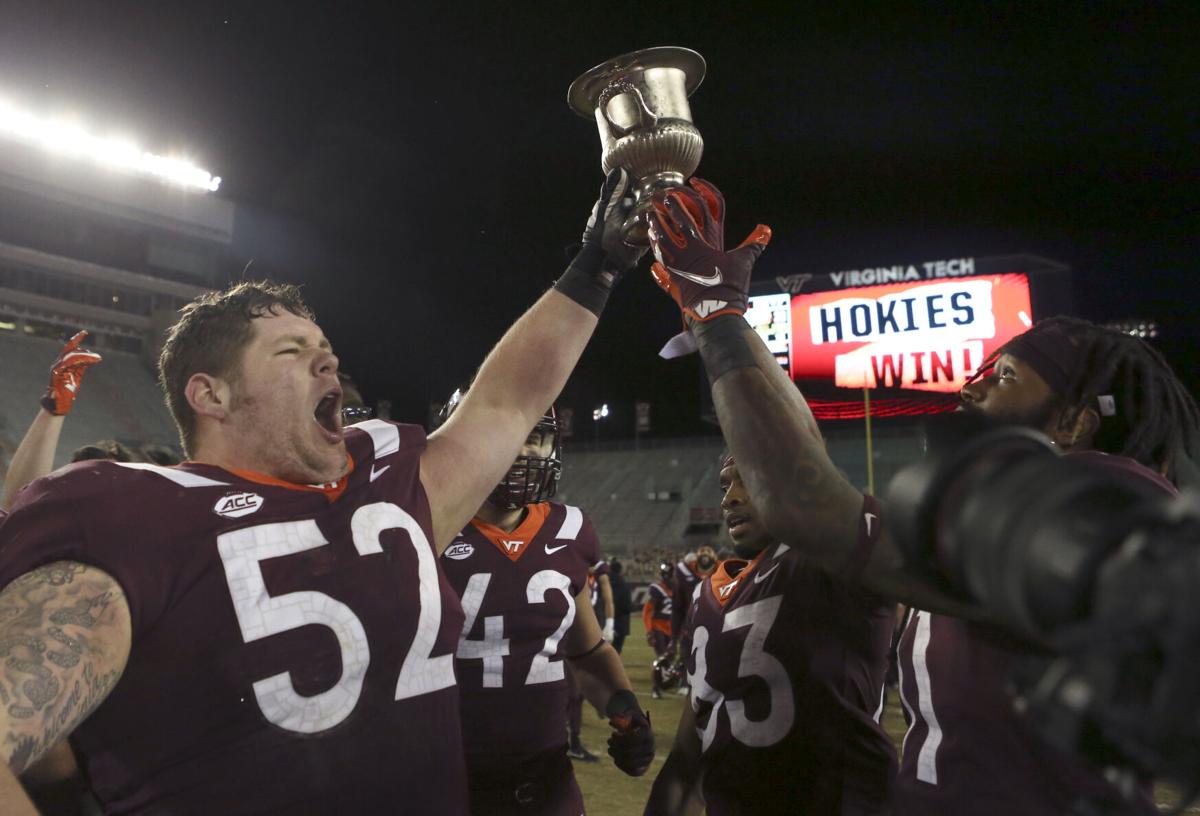 Virginia Tech’s Austin Cannon (left) celebrates after the Hokies reclaimed the Commonwealth Cup with a 33-15 win over rival Virginia on Saturday night in Blacksburg. 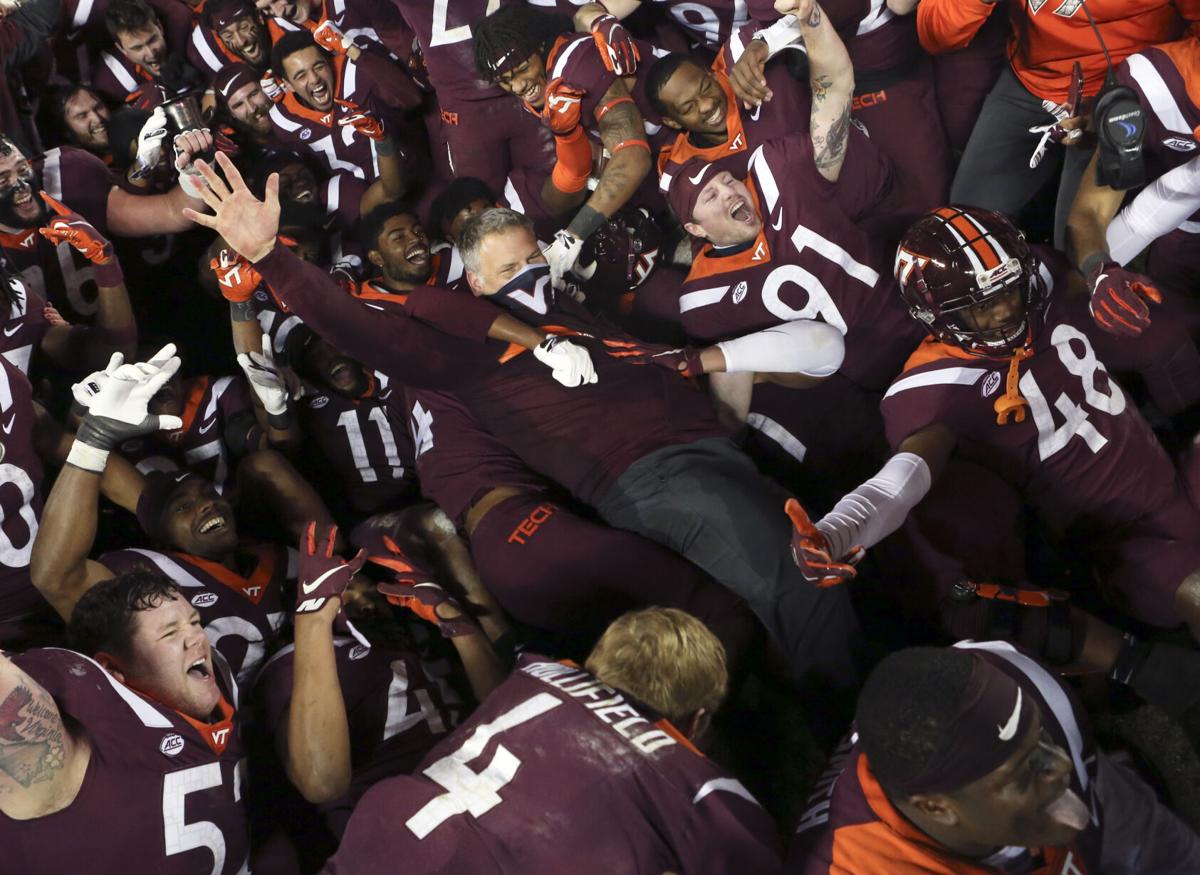 Virginia Tech coach Justin Fuente (center) and his team celebrate a victory over rival Virginia on Saturday night in Blacksburg. 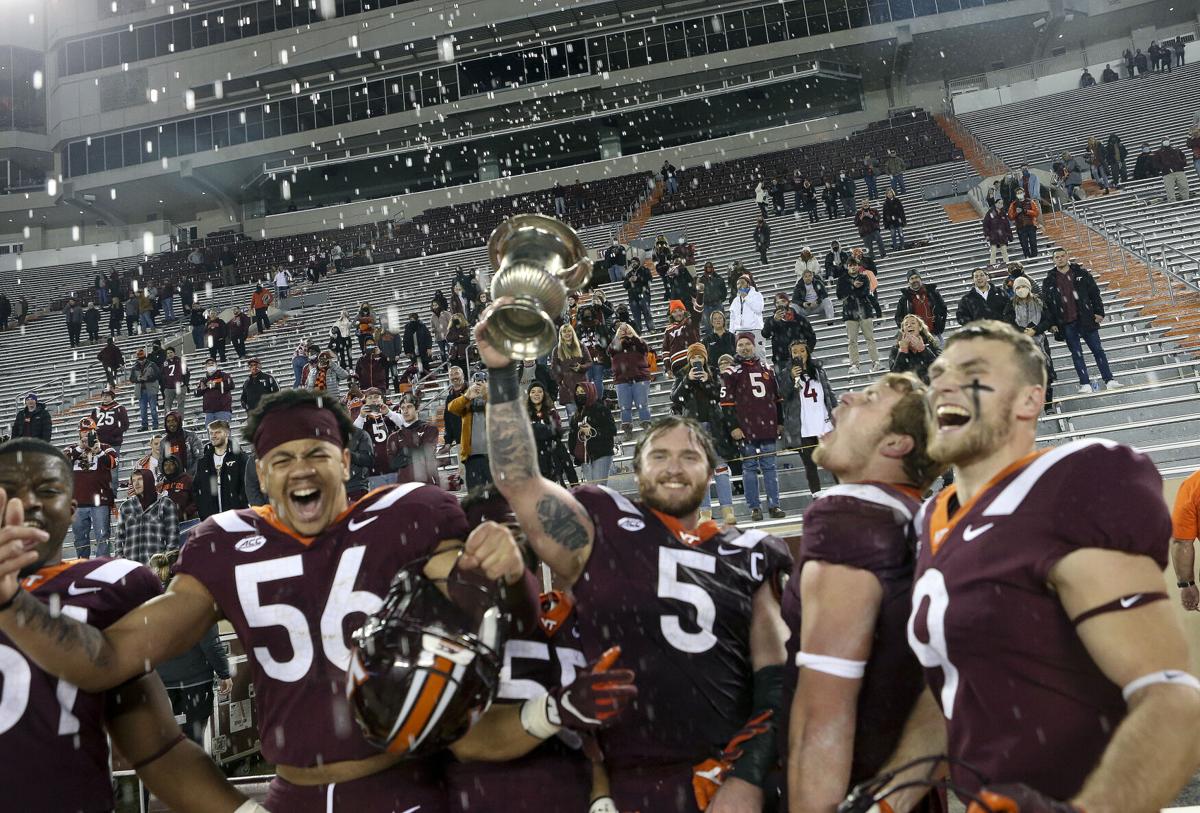 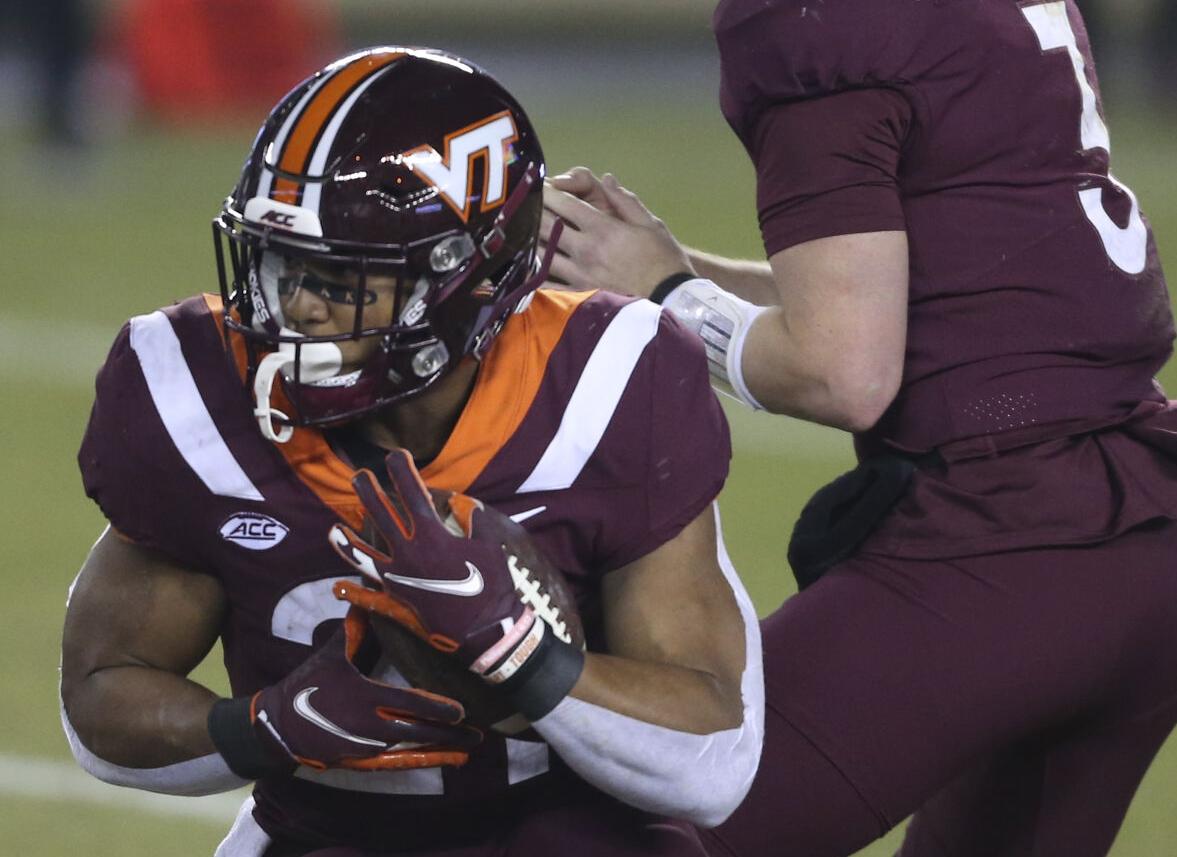 Virginia Tech’s Khalil Herbert takes a handoff from quarterback Braxton Burmeister in the first half Saturday in Blacksburg. Herbert ran for 162 yards and a touchdown in Tech's 33-15 win.

BLACKSBURG — The Commonwealth Cup’s stay in Charlottesville was short-lived.

Virginia Tech won the Cup back in impressive fashion on Saturday night in a 33-15 win over Virginia. The Cavaliers had a brief 7-3 lead in the first quarter, but Tech scored 27 consecutive points to put a disappointing four-game losing streak in the rearview mirror.

“The team we just played, they play really hard,” Virginia Tech coach Justin Fuente said. “And I think my team got tired of me telling them how hard they play.”

The Hokies’ decision to start Braxton Burmeister at quarterback paid off with the former Oregon transfer putting together one of the most efficient performances of his career — he was 15 for 22 with 212 yards and a touchdown — and Khalil Herbert had his sixth 100-yard performance of the season and first since a Week 6 win over Louisville.

Herbert, who finished with 162 rushing yards, jumped up to No. 4 all-time with 1,791 all-purpose yards this season.

“The big plays were nice to have back,” Fuente said. “It seems like it’s been a little while. We’ve had to grind some things out, but to have the big runs and it was hard sledding in there, too. I know we have nice statistics, but there were several no gains or minus yardage in there, but we were fortunate to hit some creases and get some long ones that certainly helped us out.”

Tech didn’t punt for the first time until there was 2:07 left in the third quarter.

The Hokies put the game away when freshman cornerback Dorian Strong came up with an interception at midfield late in the third quarter and kicker Brian Johnson connected on a 30-yard field goal to give his team a 33-15 lead with 12:47 to go.

Johnson was 4 of 4 in the win, with three of the field goals coming from 45-plus yards out.

On Virginia’s ensuing possession, Tech linebacker Rayshard Ashby and defensive back Armani Chatman had back-to-back sacks to force a punt at midfield. Armstrong, who was coming off back-to-back 400-plus-yard performances, struggled for much of the game and finished with 259 yards (25 of 46) with two touchdowns and two interceptions. The Cavaliers only had 55 rushing yards (2.6 yards per carry).

Tech’s offense exploded for 331 total yards in the first half, going 7 of 9 on third down and scoring all five times it had the ball.

It was the offensive fireworks in the second quarter that put them in control.

Herbert opened a drive late in the second quarter with a 76-yard touchdown run. He went untouched through a gigantic hole off the left side of Tech’s offensive line and then beat most of UVa’s secondary in a footrace down the field.

The drive lasted all of six seconds and it was Tech’s longest rushing play of the season.

On Tech’s next drive, Burmeister hit Tayvion Robinson for a 60-yard touchdown, which was the offense’s longest passing play this year. Virginia corner De’Vante Cross tried to shove Robinson out of bounds, but whiffed and the speedy receiver had an open field ahead of him down Tech’s sideline.

Virginia converted its first three third-down attempts on its opening possession and put together an impressive 14-play, 75-yard drive. Brennan Armstrong capped it off with an 11-yard touchdown pass to Keytaon Thompson to take a 7-3 lead, but the Cavs offense only managed 71 yards the rest of the half and went 0 of 4 on third down.

They couldn’t even come up with points after recovering a fumbled punt return at Tech’s 24-yard line. Kicker Brian Delaney missed a 39-yard field-goal attempt after a quick three and out.

Virginia didn’t put another sustained drive together until late in the third quarter.

“I think we have been in better position, which has helped more than anything,” Fuente said of the defense. “The last couple weeks I think we’ve played faster, we’ve played fresher. Part of that is because they haven’t been on the field as much. Part of that is finally getting an understanding of what we are trying to accomplish.”

1. Keeping it 100: Virginia Tech running back Khalil Herbert rushed for 162 yards and averaged 8.1 yards per carry against a Virginia defense that came into the game holding teams to 125 rushing yards a game. Herbert's 76-yard touchdown run in the second quarter gave the Hokies all the momentum. Tech also got 58 hard-fought yards from Jalen Holston. Grade: A

2. Run it down: Virginia was limited to 21 carries, and a large handful of those were Brennan Armstrong scrambling out of the pocket. The Cavaliers only handed off to a running back four times. It was a combination of factors that forced UVa to abandon the run — from a strong effort by Tech's defensive front to falling behind 27-7 in the second quarter. Grade: A

3. Perk up: Much of Virginia Tech's pressure came in the second half. The Hokies sacked Brennan Armstrong four times and had three quarterback hurries. Tech's secondary also had a good showing with five pass breakups and two interceptions. The rhythm Armstrong got on Virginia's first drive was short-lived, and the offense struggled the rest of the night. Grade: A

Virginia Tech’s Austin Cannon (left) celebrates after the Hokies reclaimed the Commonwealth Cup with a 33-15 win over rival Virginia on Saturday night in Blacksburg.

Virginia Tech coach Justin Fuente (center) and his team celebrate a victory over rival Virginia on Saturday night in Blacksburg.

Virginia Tech’s Khalil Herbert takes a handoff from quarterback Braxton Burmeister in the first half Saturday in Blacksburg. Herbert ran for 162 yards and a touchdown in Tech's 33-15 win.