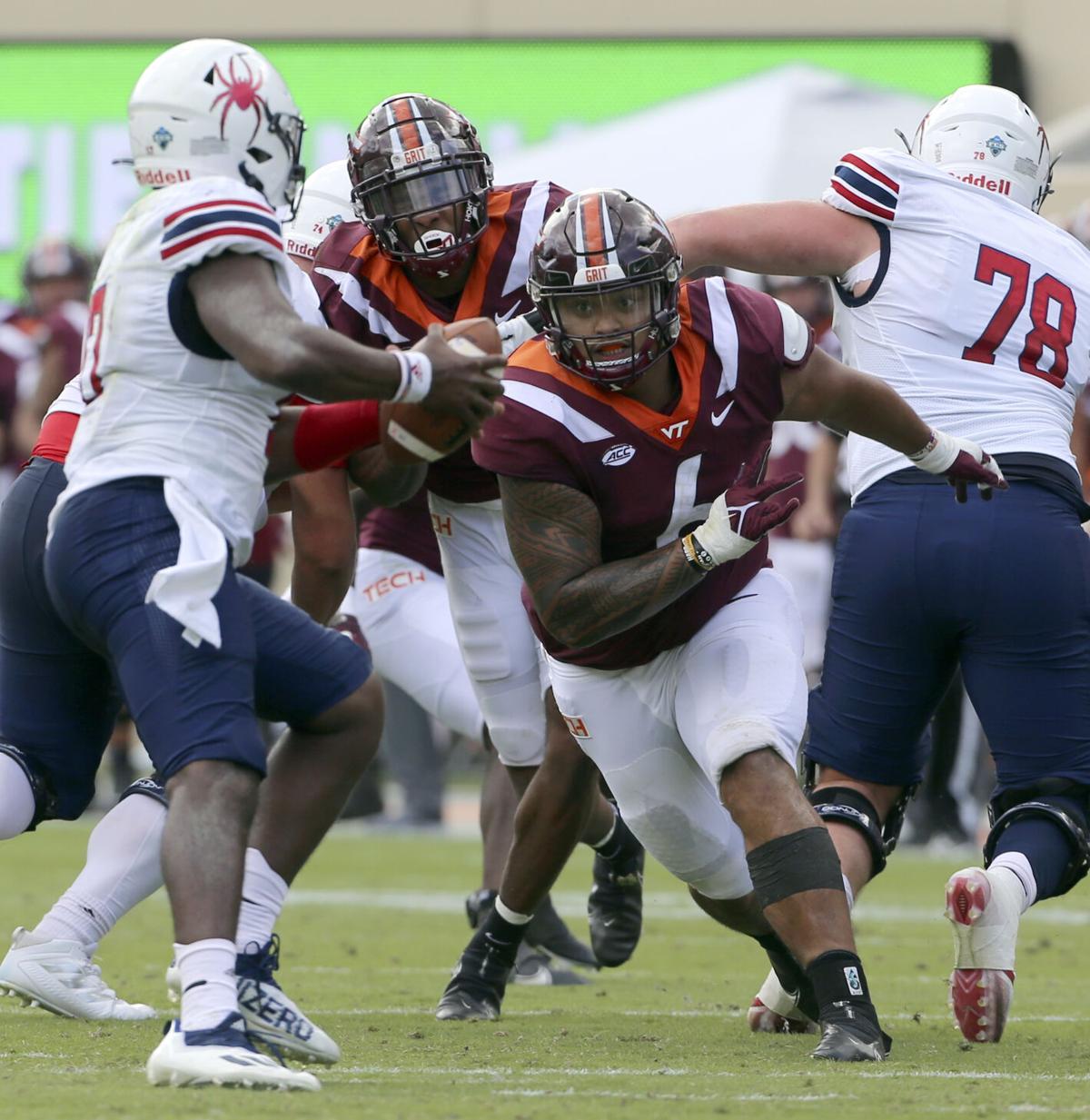 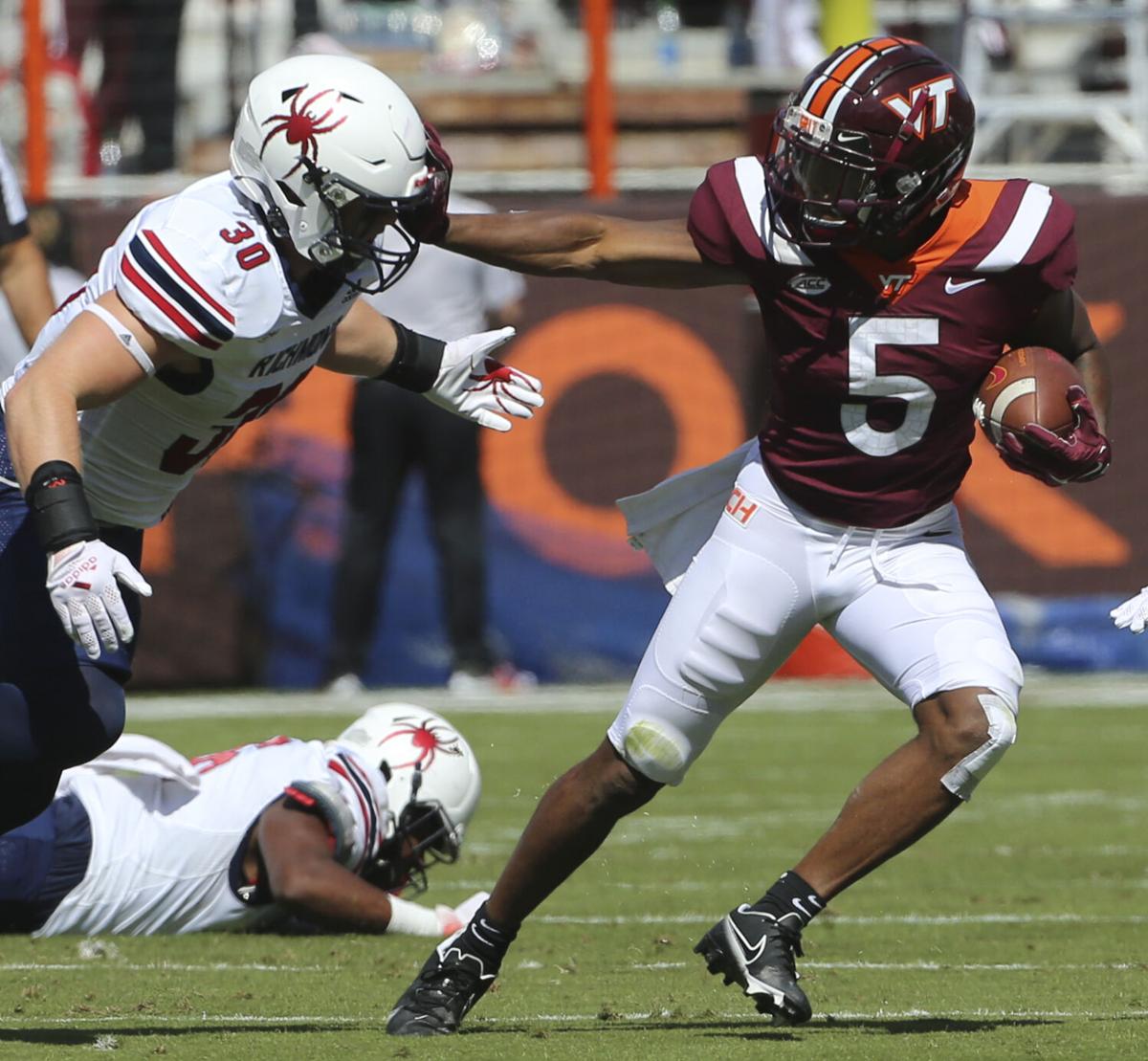 Virginia Tech running back Raheem Blackshear (right) escapes a tackle by Richmond's Tristan Wheeler in the first half Saturday. 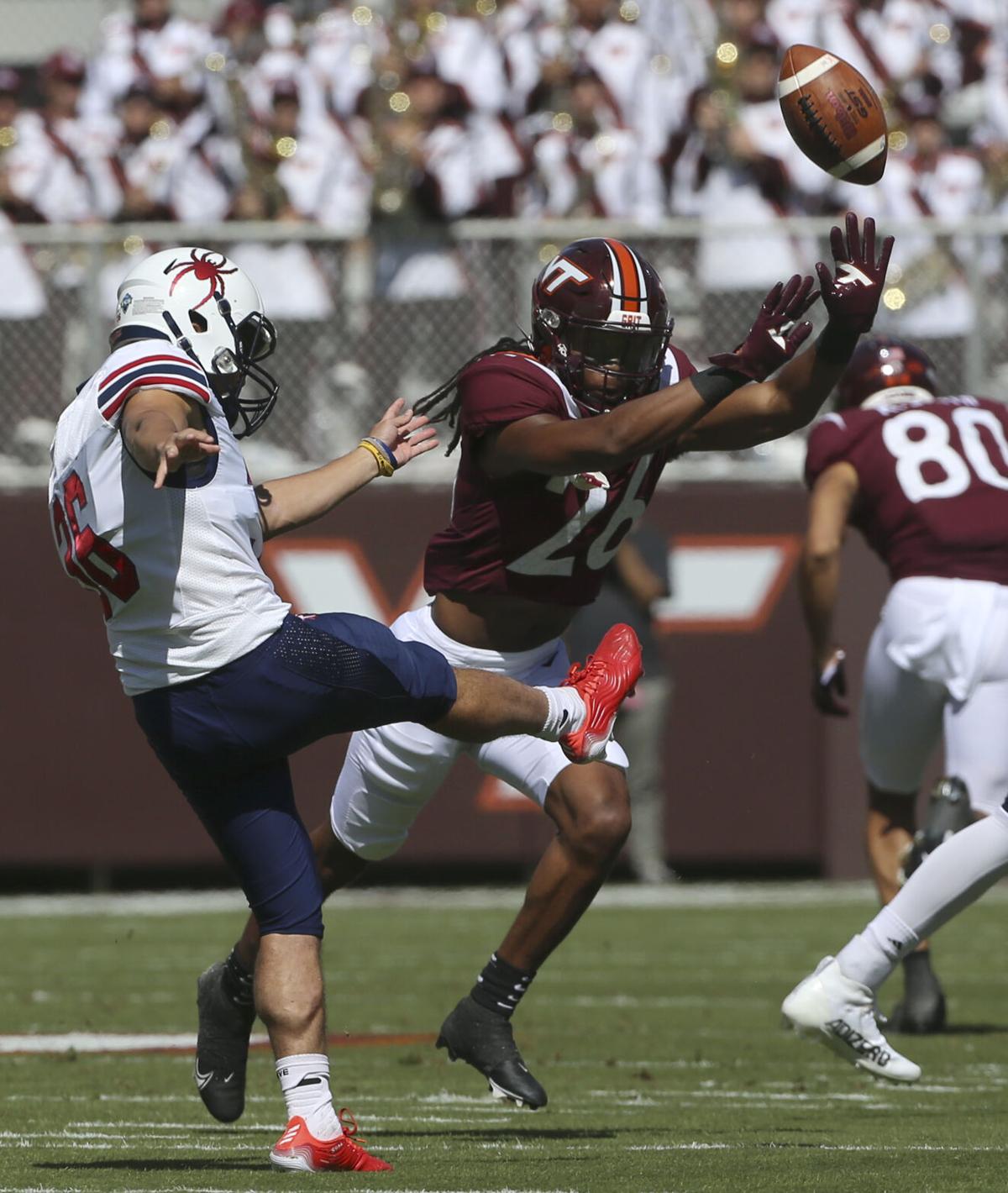 Virginia Tech defensive back Jalen Stroman (center) rushes a punt by Richmond's Aaron Trusler (left) in the first half Saturday.

Coach Justin Fuente said the offense “stunk” last week in a loss to West Virginia and it wasn’t much better on Saturday against Richmond at Lane Stadium where they put up 318 total yards of offense (5.1 yards per play).

The Hokies won 21-10 to avoid having their names added to the growing list of FBS teams that have lost to an FCS opponent this season, but the win did little to inspire confidence in an offensive unit struggling to put points on the board.

“We’ve got huge improvement to make,” Fuente said of an offense he labeled as “inconsistent.”

Tech receiver Tre Turner did most of the heavy lifting on offense with six catches for 102 yards with a touchdown.

He made an acrobatic catch on the opening drive to bring down a 10-yard touchdown pass from Braxton Burmeister before stepping out of the back of the end zone. Turner did a scissor kick in midair to ensure his back foot got down in bounds.

In the second half, he made a leaping grab with a defender pressed up against him. He had to lean backward to go up and get the ball for the 42-yard gain. Backup quarterback Connor Blumrick punched the ball into the end zone from the 1-yard line a few plays later to give Tech its first two-score lead of the game.

“There were two that were definitely contested balls, and that’s what we’ve got to have,” Fuente said. “We’re not always going to get open by 10 yards. And he went up and was aggressive to the ball and made a couple plays, which I thought was what we really needed. And it was a good job by Braxton giving him a chance to go up and make those plays.”

Fellow receiver Tayvion Robinson provided a spark late in the first half when he returned a punt 60 yards for a touchdown. He weaved through defenders at midfield and side-stepped a diving tackle attempt to get free.

The special teams touchdown helped Tech go into halftime with a 14-7 advantage.

It was the first return touchdown of Robinson’s career and Tech’s first punt return for a touchdown since Greg Stroman did it against North Carolina in 2017. Robinson also had six catches for 76 yards in the win.

“It was huge,” Fuente said. “We felt like for some time that Tayvion was a weapon back there and were just kind of waiting for the dam to break. And it did today. We spend a lot of time on that stuff, and it was nice to reap those benefits at that point of the game.”

Richmond attempted a comeback without starting quarterback Joe Mancuso, who was injured on the second play of the game and didn’t return.

Mancuso was knocked down by Tech safety Tae Daley at the end of a 29-yard run and landed awkwardly. He was immediately taken to the back by the team’s training staff for X-rays of his right hand and replaced by backup quarterback Beau English.

The Spiders drive went backward after Mancuso’s exit, and Mancuso was ruled out for the rest of the game only a few minutes after Richmond punted. He came back onto the field later in the half wearing a big bag of ice around his hand.

Richmond showed signs of life coming out of halftime with its first sustained drive of the game, but was far too one-dimensional.

Tech buckled down during the Spiders’ lone trip inside the red zone in the second half and forced them to settle for a 38-yard field goal.

It was a group effort with Daley stopping a swing pass on first down for a big loss, linebacker Dax Hollifield dropping Jonathan Johnson in his tracks for a short gain on second down and defensive ends Jaylen Griffin and Amare Barno forcing an incompletion on third down with a quarterback hurry.

“They deserve a ton of credit,” Burmeister said. “They keep keeping us in it. They are really consistent. They go in week in and week out and I think as an offense we can learn a lot about them as we continue to grow.”

Virginia Tech got off to a strong start with a five-play, 65-yard drive to open the game.

Burmeister was 3 of 4 on the drive for 49 yards and gave the Hokies a 7-0 lead with his touchdown throw to Turner, but that remained Virginia Tech’s only offensive highlight in the half. Burmeister missed on a number of throws, including a would-be touchdown to Drake DeIuliis. DeIuliis slipped free in coverage, but Burmeister overthrew him by a couple of yards.

With the offense struggling, Fuente tried to shake things up.

He called a fake punt at midfield that would have worked with a more accurate throw from Peter Moore. Moore had Dorian Strong open about 15 yards downfield, but he underthrew it. Moore had a strong first half otherwise with three 50-plus yard punts downed inside the 5-yard line.

Fuente also sent backup quarterback Knox Kadum into the game for a drive. That decision backfired when Kadum threw an interception on his first pass attempt. He rolled out to his right on the play with Tech backed up at its 6-yard line, and safety Aaron Banks picked off a ball intended for Robinson.

Richmond made quick work of the short field.

Running back Savon Smith scored a 17-yard touchdown run on first down off the right side of the line. He went untouched after bouncing it to the outside to tie the game 7-7 with 9:22 left in the first half.

It was the only real letdown in the half from a Tech defense that held Richmond to five first downs and 101 total yards in the first half. The Spiders were 0 for 6 on third down and went three and out three times.

Photos: From the Virginia Tech-University of Richmond football game

Virginia Tech running back Raheem Blackshear (right) escapes a tackle by Richmond's Tristan Wheeler in the first half Saturday.

Virginia Tech defensive back Jalen Stroman (center) rushes a punt by Richmond's Aaron Trusler (left) in the first half Saturday.