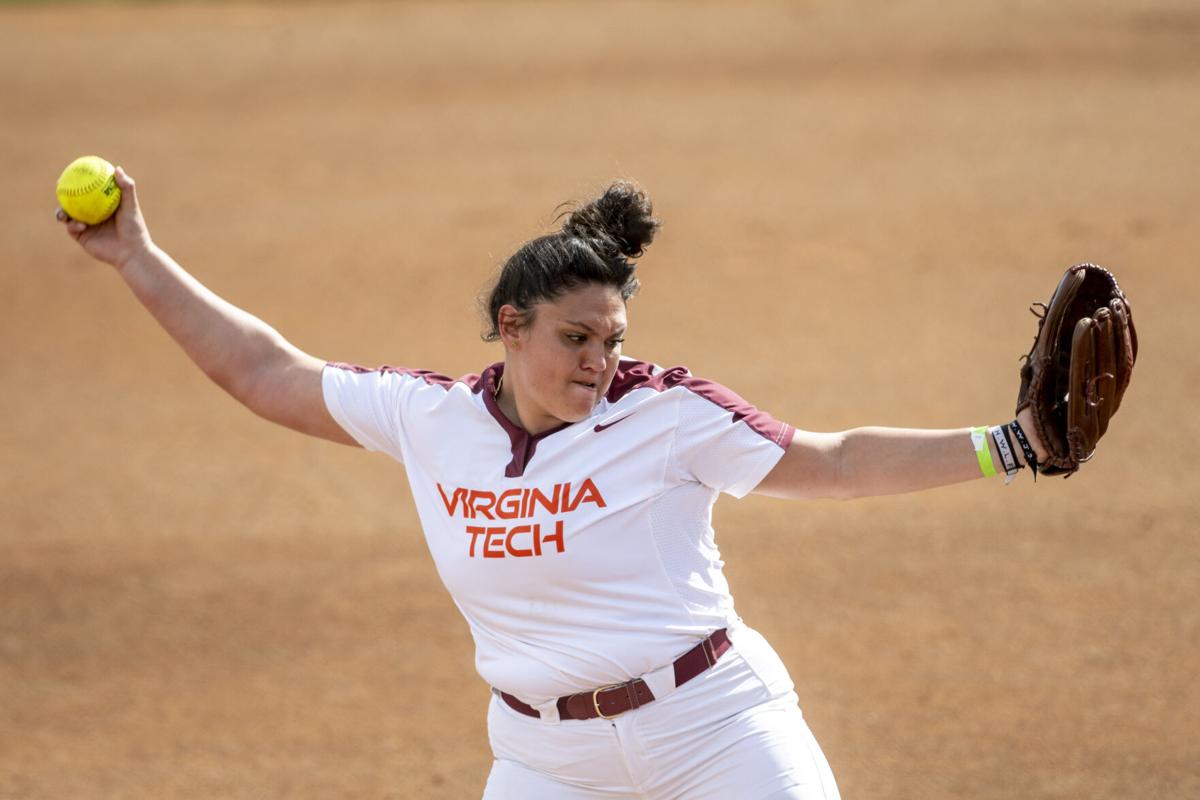 Virginia Tech’s Keely Rochard ranks second in Division I in strikeouts (197) and third in wins (19). She is tied for first in shutouts (10). 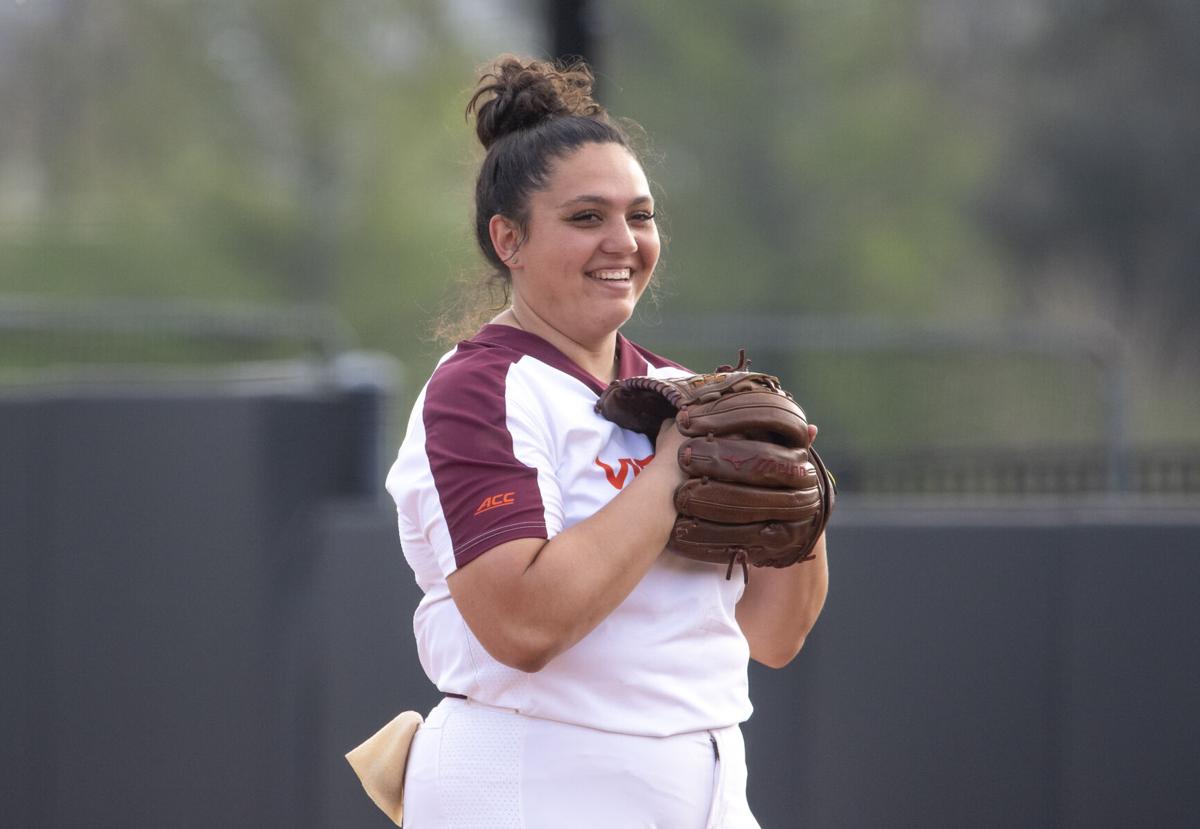 Virginia Tech ace Keely Rochard is a big reason the Hokies are ranked 15th in the country and are in third place in the ACC. 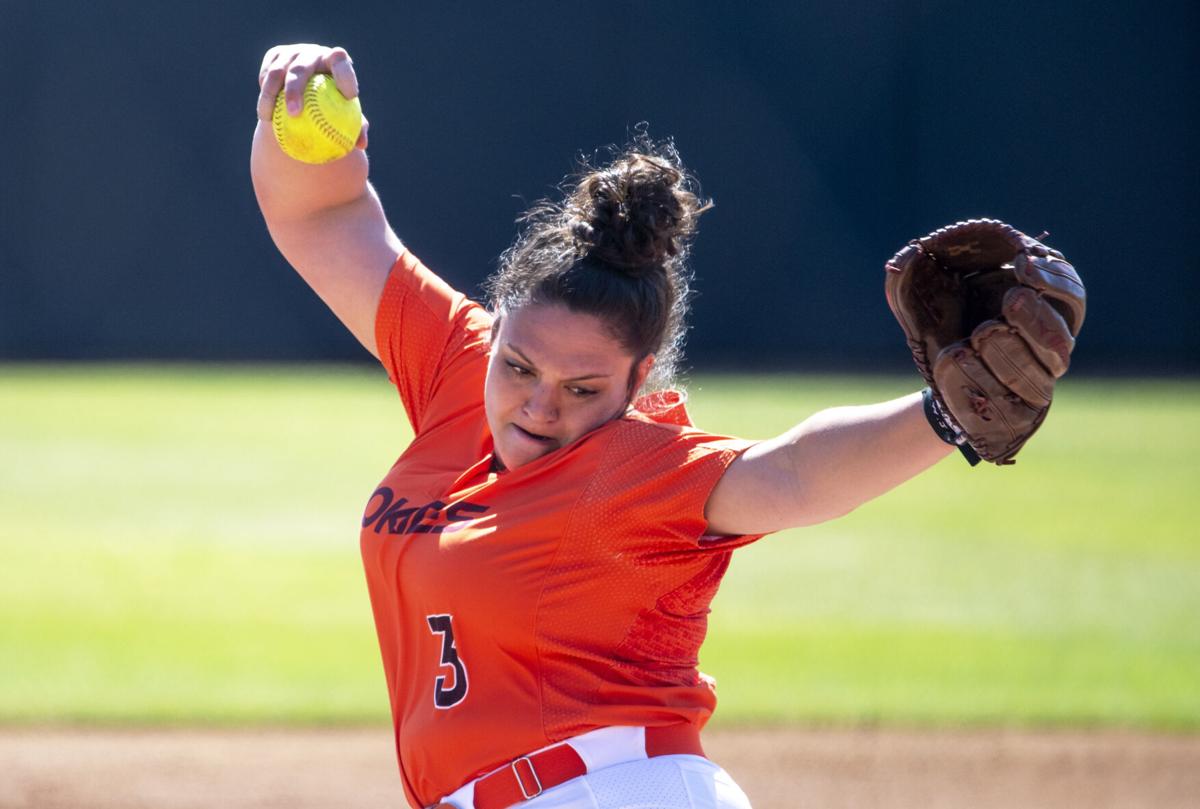 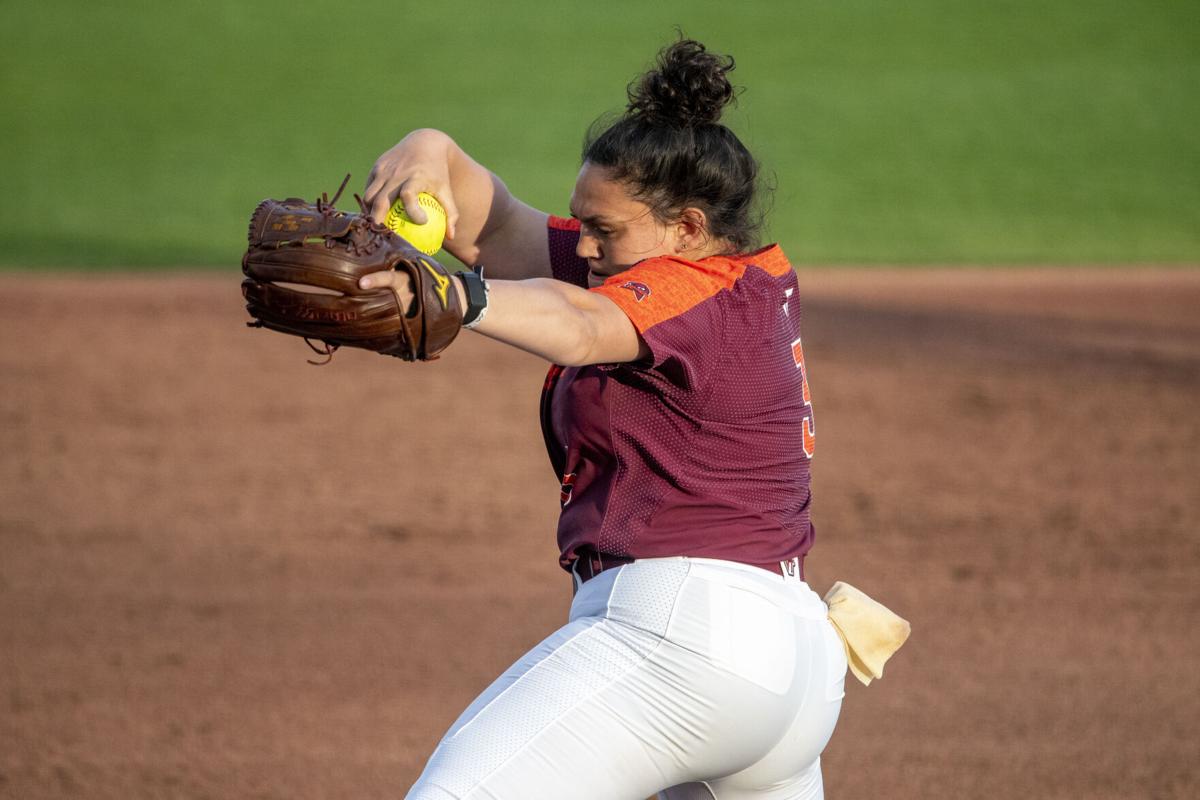 Virginia Tech will start Keely Rochard three times in a four-game series, and she is often even better on a Sunday than she is on a Friday. 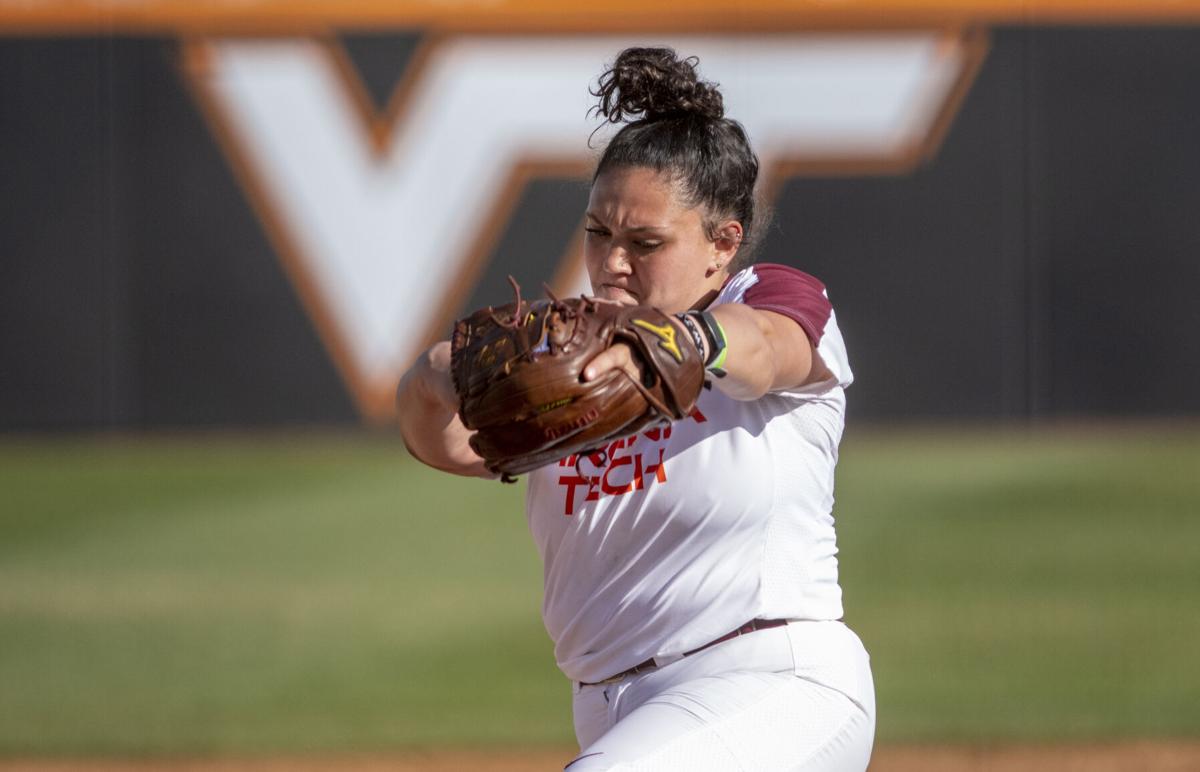 Virginia Tech pitcher Keely Rochard made the All-ACC first team in 2019. She earned All-America honors for the abbreviated 2020 season. This season, she has twice been named the national pitcher of the week.

Keely Rochard has a cosmetology license.

But doing someone’s hair and nails are not her only skills.

She’s pretty good with a softball in her hand, too.

The fourth-year junior is once again the ace of the 15th-ranked Virginia Tech softball team (25-6, 16-6 ACC) — not that she cares about her glittery statistics.

“She’s one of the best pitchers in the country,” said ACC Network and ESPN analyst Amanda Scarborough, a former Texas A&M ace.

“Her stamina and her endurance and strength are unparalleled,” Scarborough said. “The fact that she can throw so many complete games multiple times a week, you just don’t see that very often anymore. That’s also what makes her so special, is that she can go against the same team multiple times and still shut them down.”

Rochard grew up in Williamsburg. She verbally committed to Virginia Tech the summer after her ninth-grade year, picking the Hokies over Georgia Tech and Elon.

She led Warhill High School to the Group 3A state title as a junior and senior as she stymied foes with her riseball.

In Rochard’s final high school game, she outdueled fellow Tech signee Jordan Dail of Brookville in a 1-0, 18-inning marathon in the 2017 Group 3A final in Salem. Dail transferred from Tech to Oregon prior to the 2019 season.

Rochard did not experience instant success in college. Carrie Eberle was the Tech ace in 2018, when Rochard was a freshman.

“Let’s just say I’m glad we have a COVID year so I can make up for that year,” said Rochard, referring to the extra year of eligibility that the NCAA granted 2020 Division I winter-sports athletes because of the coronavirus pandemic.

She stuck to curveballs as a Tech freshman because her riseball wasn’t working.

Why was the riseball not effective?

“I didn’t have any instruction,” she said.

Tech went 23-30 in 2018, when Scot Thomas was the head coach and former Tech pitching great Angela Tincher O’Brien was the pitching coach.

He was replaced by former Kennesaw State coach Pete D’Amour, who brought pitching coach Doug Gillis with him from Kennesaw State.

Rochard credits Gillis for helping her regain command of her riseball.

“He worked on my mechanics,” she said. “He saw things that were wrong and he knew how to fix them.”

Gills also told her to throw her change-up more, and tweaked her windup.

Eberle and Rochard gave Tech a potent 1-2 pitching punch in 2019, with Eberle earning ACC pitcher of the year honors and Rochard joining her on the All-ACC first team. The Hokies made the NCAA tournament for the first time since 2015.

“It just proved that we had talent and that these coaches know what they’re doing,” Rochard said.

Eberle transferred to Oklahoma State after that season, but that did not turn out to be a problem.

Rochard flourished as Tech’s ace last season. The Hokies were 21-4 overall and 3-0 in ACC play when the season came to a sudden halt last March because of the pandemic.

The 5-foot-8 Rochard went 15-3 with a 1.52 ERA and 183 strikeouts in 120 innings, earning first-team All-America honors. She led Division I in wins and strikeouts and tied for the Division I lead in shutouts (seven).

“I had to work extra hard, make fewer mistakes, because I knew that they had a lot of film on me,” she said.

D’Amour said her dropball is better this year, and her velocity has also increased.

She throws 64-67 mph. But that is not what makes the riseball her best pitch.

“It’s her spin and her movement. She gets so many swings and misses because of her deception with that spin,” Scarborough said. “Her riseball is tremendous. … She can throw it right above the knee to kind of that mid-range, letter high, and then also extend the zone to get hitters to chase maybe at the eyes.”

Rochard’s second-best pitch is her change-up.

She might feature a different pitch in each of her three starts in a series.

Last month against Pittsburgh, she pitched the first four innings of a 9-0, five-inning win on a Friday; pitched a one-hitter and struck out 19 in a 5-0 win in the second game of a Saturday doubleheader; and pitched another one-hitter with 19 strikeouts in a 2-0 win on a Sunday.

“She’s a strong kid,” said D’Amour, whose team is in third place in the ACC. “She oftentimes pitches better the third day than the first day, and that’s really rare.”

“I honestly am not sore after the weekends,” she said. “We get weekly massages. I’m constantly doing stuff to take care of my body.”

Rochard said she has not yet decided if she will return to Tech next season for her extra year of eligibility.

“All I have left are electives, so I could take them all in the summer, [or] I could drag it out,” she said.

She already has a post-softball career in mind.

Rochard, who got a cosmetology license when she was in high school, hopes to eventually have her own salon where she can do hair and nails.

“My mom’s a hairdresser, so I’ve grown up around it,” she said. “I’m a perfectionist, so I really like … doing nails and hair. I get to make it as good as I want.”

Virginia Tech’s Keely Rochard ranks second in Division I in strikeouts (197) and third in wins (19). She is tied for first in shutouts (10).

Virginia Tech ace Keely Rochard is a big reason the Hokies are ranked 15th in the country and are in third place in the ACC.

Virginia Tech will start Keely Rochard three times in a four-game series, and she is often even better on a Sunday than she is on a Friday.

Virginia Tech pitcher Keely Rochard made the All-ACC first team in 2019. She earned All-America honors for the abbreviated 2020 season. This season, she has twice been named the national pitcher of the week.