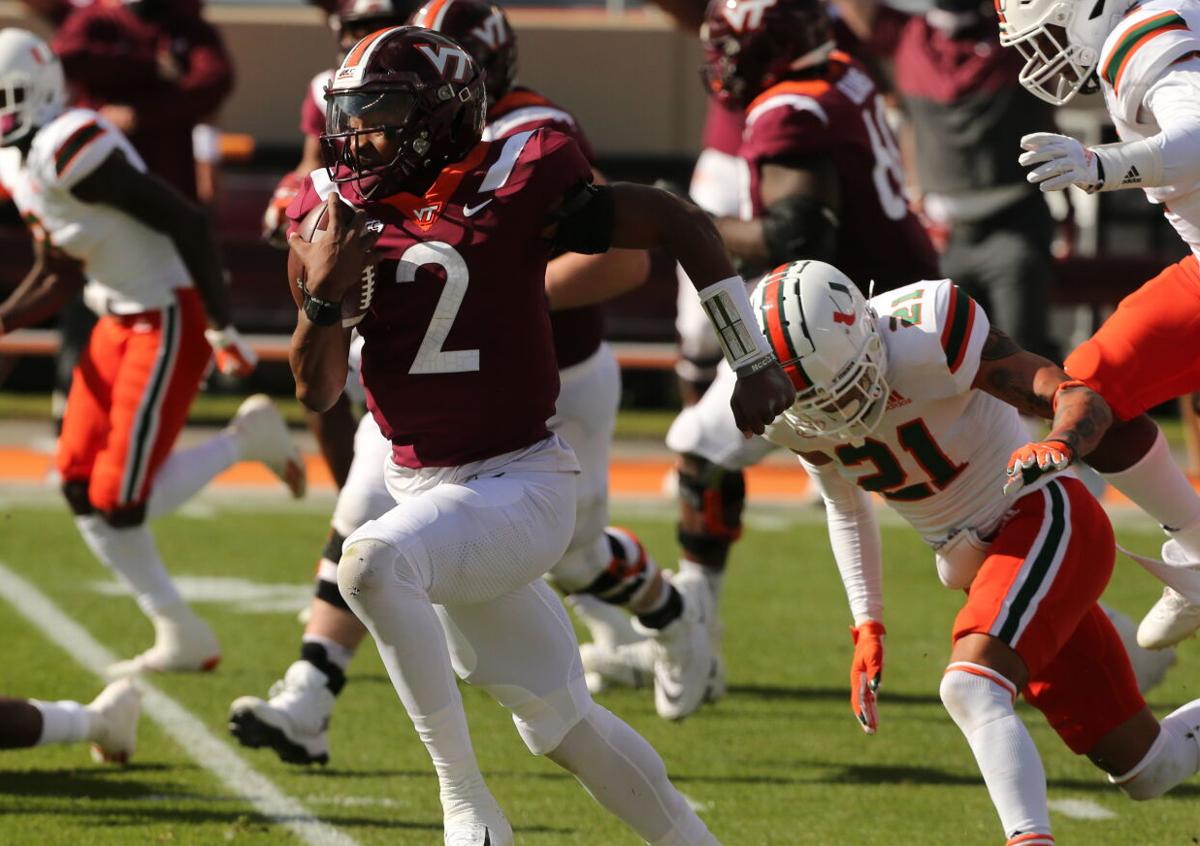 Virginia Tech quarterback Hendon Hooker keeps the ball as Miami safety Bubba Bolden (right) looks for a tackle in the first half on Saturday in Blacksburg. Miami won 25-24. 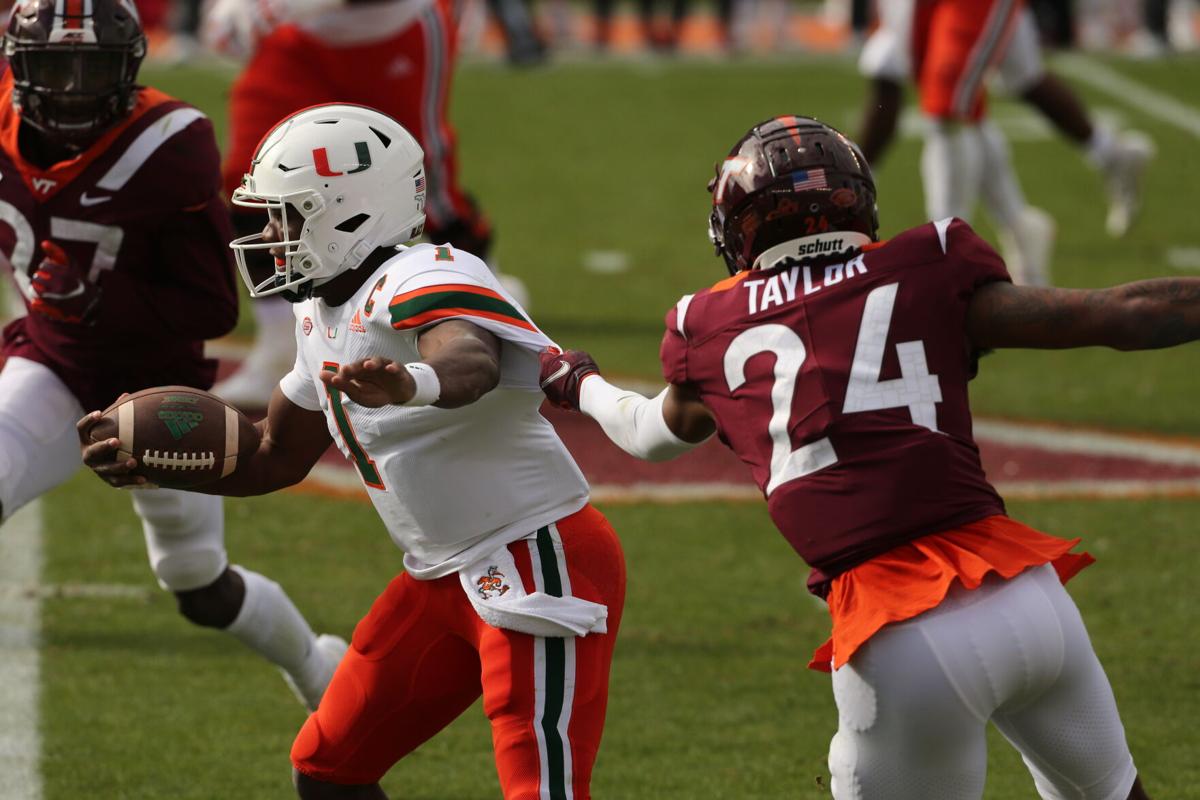 Miami quarterback D'Eriq King (left) looks to break a tackle from Virginia Tech defensive back Devin Taylor during the first half of Saturday's game in Blacksburg. 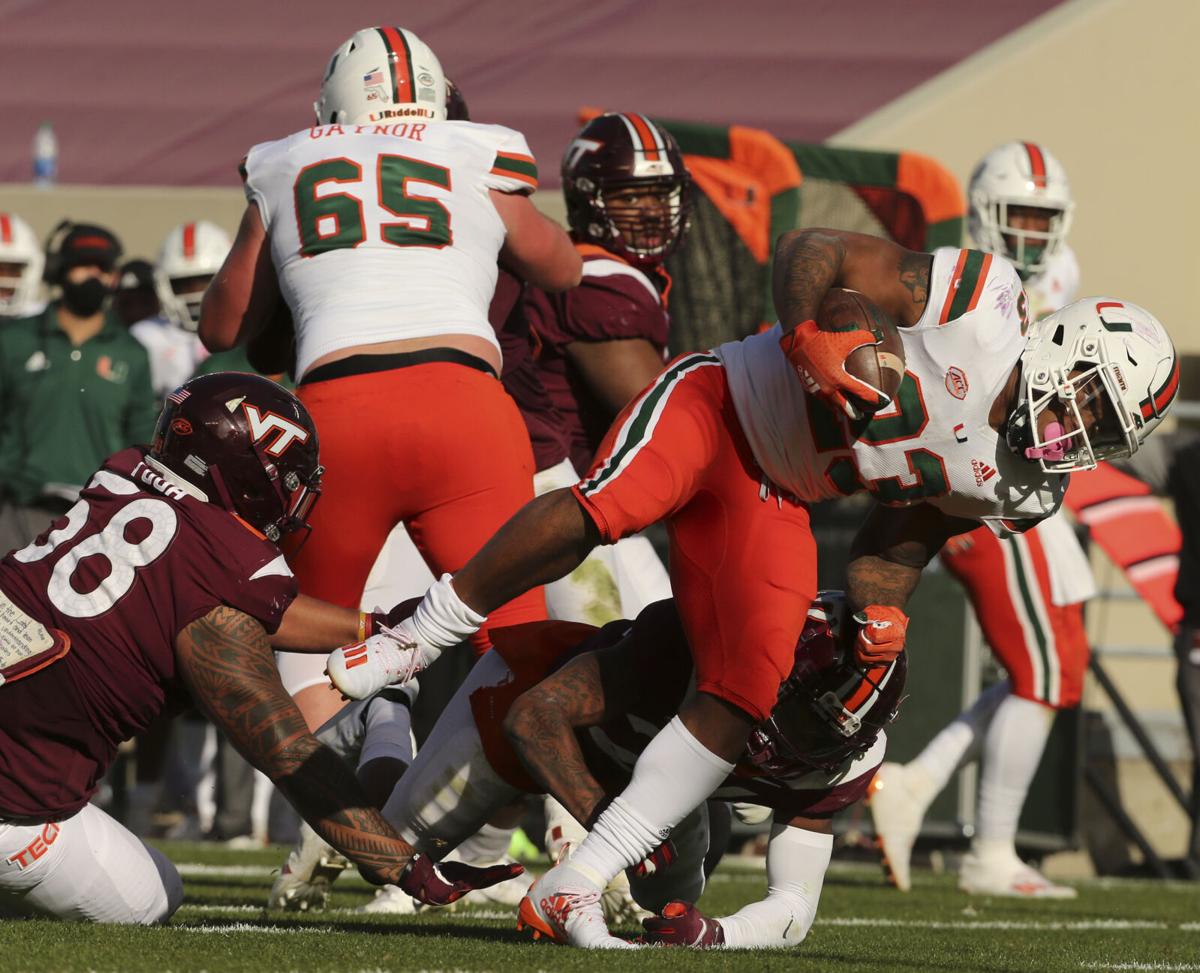 BLACKSBURG — Virginia Tech couldn’t conjure up any last-minute magic in a 25-24 loss to Miami on Saturday at Lane Stadium.

Tech was looking for the program’s first win over a top-10 opponent since 2014 (Ohio State) and had a 11-point lead late in the third quarter over the Hurricanes, but couldn’t hold on.

The Hokies’ two-minute offense, which looked so good a week ago against Liberty, stumbled on two separate possessions as it tried to get into field goal range. Quarterback Hendon Hooker, who threw a rare fourth-quarter interception, was sacked twice down the stretch and slipped without being touched on a key third-down attempt.

“These guys are blitzing from everywhere, they’re athletic and can rush the passer,” Tech coach Justin Fuente said. “Last week in the two-minute offense, they just basically just stood still. Totally different animal out there today.”

The loss dropped Fuente to 0-6 against top-10 teams while at Virginia Tech, but he was worried less about missing out on the milestone as he was his team’s psyche after a second straight emotional loss.

“I’m not happy with not winning the ballgame, but my gosh, did our guys lay it on the line today,” Fuente said. “So many great examples on both sides of the ball. Our guys refused to give in to negativity, refused to give into all the things that are out there and I’m sure all you know what I’m talking about. ... Guys being selfless and I’m hurting for them because they were so close to getting what they desperately wanted throughout the week of preparation.”

Miami running back Cam’Ron Harris made it a one-possession game with a 6-yard touchdown run late in the third quarter. Then, the Hurricanes jumped out in front when D’Eriq King hit Mark Pope for a 36-yard touchdown with 5:59 to go in the fourth.

Pope beat Tech cornerback Dorian Strong on a slant right down the middle of the field for the team’s only gain of 30 yards or more in the game.

Tech’s defense gave up 386 yards, but were much less mistake-prone than it had been in recent weeks. Miami only averaged 2.7 yards on the ground, and the Hokies’ front seven generated pressure throughout the game, sacking King five times on third down (six sacks total).

Defensive tackle Jarrod Hewitt, who was wearing Frank Beamer’s No. 25 jersey, led the way with a career-high 2.5 sacks.

“I was pleased with the way we played defense the whole game,” Fuente said. “That is an explosive, dangerous unit. And we threw the kitchen sink at them and our guys executed pretty well. We defended in the back end against some pretty explosive players. I thought the guys played their tails off.”

Virginia Tech’s offense played much better in the first half without significant contributions from injured starting running back Khalil Herbert and tight end James Mitchell. Herbert had two carries for 11 yards and Mitchell drew a pass interference penalty on Miami’s defense the only time he was targeted.

Hooker was once again the focal point of the offense early in the game.

He put Tech up 7-0 with 6:01 to go in the first quarter with a 53-yard touchdown run. He went untouched through the middle of the line for his longest rush of the season after faking a handoff to Tayvion Robinson.

The fourth-year junior made some nice throws in the first half as well, including a 32-yarder to Kaleb Smith that prevented a second-quarter drive from ending in a three-and-out. Hooker put the Hokies in the red zone with a 19-yard run off the right side to set up a Jalen Holston’s 8-yard touchdown run two plays later.

Holston’s first touchdown of the season (and first since the 2018 win over Marshall) put Tech up 14-3 with 8:47 to go in the first half. He scored again in the second half on a 1-yard run.

Miami moved the ball with ease for much of the half, but only came away with one touchdown on four trips inside Tech’s 30-yard line. King scored Miami’s lone touchdown in the first half on a 10-yard run. He was 6 of 6 on a 10-play, 84-yard drive that cut Tech’s lead to 14-10 with 5:11 to go in the half.

“They’ve got as many skill guys as anybody in this league,” Hewitt said. “When they get going fast, they can be tough at times, just being in the right gap, getting the call and executing your assignment. They’re a pretty efficient offense. Early on, they really got their tempo going, but I felt at times we were able to win first down and kind of get them out of their rhythm.”

Photos: Virginia Tech falls to No. 9 Miami in Blacksburg for second straight loss

Virginia Tech quarterback Hendon Hooker keeps the ball as Miami safety Bubba Bolden (right) looks for a tackle in the first half on Saturday in Blacksburg. Miami won 25-24.

Miami quarterback D'Eriq King (left) looks to break a tackle from Virginia Tech defensive back Devin Taylor during the first half of Saturday's game in Blacksburg.