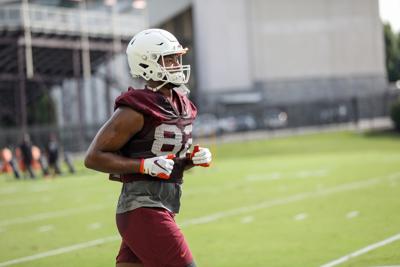 BLACKSBURG — Every time Jimmy Mitchell looks out in the backyard at the family’s home in Big Stone Gap he’s reminded of his son.

Jimmy Mitchell dug up the yard and laid down a slab of concrete when his son, Virginia Tech tight end James Mitchell, showed interest in basketball at 5 years old.

The hoops came next.

Mitchell’s court wasn’t regulation size, but his older cousins and kids in the neighborhood didn’t know the difference as they spent their summers shooting hoops.

“It’s a small court, but back then the kids thought it was a YMCA,” Jimmy Mitchell said, with a laugh. “We didn’t know what we were doing, but we put something out there and said go get it.”

Long before James Mitchell was a starter in the ACC, he was running layup drills on the court under his father’s supervision. Those drills gave way to more advanced practice habits as the years went on. Jimmy Mitchell woke his son up every morning once he started Pee Wee football to do pushups and run laps.

“It was old school stuff,” Jimmy Mitchell said. “He just worked, and worked.”

The court currently sits idle — Mitchell’s mother Marcia hopes it will eventually be a place where future grandchildren will develop a similar interest in sports — but the family enjoys those daily reminders of how far their son has come.

It was particularly poignant this summer as James prepares for what in all likelihood is his final collegiate season. Mitchell put off entering the NFL Draft one more year for one final go-around with the Hokies.

Virginia Tech coach Justin Fuente wasn’t sure what to expect when James Mitchell came to his office last December. The coaching staff worked diligently to get him the information he needed to make an informed decision on entering the NFL and left it up to Mitchell and his family to decide.

According to Fuente, Mitchell got right to the point when the two sat down.

“It was in a very James way,” Fuente said. “He just explained how he came to the decision, and why he wanted to do it. I didn't know what he was going to do, but I figured he was in a good place to make a decision. You still always wonder.”

One of the primary factors for Mitchell was getting his sports media and analytics degree.

He was also confident that an additional year of experience focused on improving areas of his game that NFL scouts had concerns about (he gave in-line blocking as an example) would help his draft stock.

Mitchell publicly announced the decision in a no frills manner as well. He tweeted out a short highlight video that flashed the words “I’m back” at the end.

Fuente was probably more nervous back in 2017 when the then-four star tight end was deciding between Virginia Tech, Duke and Georgia. He’s learned to read Mitchell in the intervening years and Mitchell has grown more comfortable speaking up.

“He would still make a pretty good card player,” Fuente said, with a laugh.

Fuente found an instant connection with Mitchell back then as someone who also played for a Union High School — Fuente’s alma mater of the same name is in Tulsa — with the same “U” on their helmets. Mitchell was one of the first recruits Fuente visited after he was hired in 2016.

Mitchell’s talent was obvious, but each time Fuente visited Big Stone Gap he was struck by what the tight end meant to the old coal mining town.

“He was a big deal there, and the way he handled it was pretty cool,” Fuente said. “We are talking about a guy in high school who was treated like an adult. The reverence that adults and young people have for him in his home time is special.”

His father had seen it before when Thomas Jones and Julius Jones grew up in Big Stone Gap and played football at Powell Valley where Mitchell was on staff.

That experience still didn’t prepare Jimmy Mitchell for the fervent support his son would receive. James Mitchell, who would often spend hours after high school games signing autographs for fans, embraced his place as the town’s role model.

“I obviously knew the Jones brothers, but a lot of kids my age didn't have people going to big time schools,” James Mitchell said. “It was a neat opportunity to give back to them and show them it can happen. Kids from this area can go on and do whatever they want to do, it's just a matter of going out there and doing it. It's just showing them it's going to take a lot, a lot of hard work and a lot of sacrifices.”

Mitchell’s small town roots were evident in his unique reaction to the NIL hysteria.

The NCAA changed the rules July 1 to allow student-athletes to profit off their name, image and likeness for the first time. There were a number of high-profile deals out of the gate and there was likely money to be made for Mitchell given his high profile position.

The tight end is one of two players on the Hokies to receive preseason All-ACC honors and he made the Mackey Award watch list, an award given annually to the top tight end in college football.

Mitchell wasn’t in a hurry to cash in.

The reaction didn’t surprise his father, who always tells his son to put one foot in front of another. Right now, that means going out on a high note for Virginia Tech.

Mitchell has 47 career catches for 796 yards with 11 touchdowns (six receiver). He was second on the team last year with 435 yards (16.7 yards) and was the team’s highest-rated player in the pass game, according to Pro Football Focus.

He was deployed in all sorts of ways across the line of scrimmage last year, briefly returned punts and was almost forced into action at quarterback (unbeknownst to him) against Clemson when Braxton Burmeister and Hendon Hooker were knocked out of the game.

Mitchell’s last lap starts with the season opener against North Carolina on Sept. 3. Tech is expected to welcome back fans back to Lane Stadium in full for the first time since November 2019.

His family will be in attendance and ready to cheer him on as they always have since he was a five-year old boy playing basketball in the backyard.

“We think he has a shot at the next level, but even if he never does he can walk away proud,” Jimmy Mitchell said. “We have watched him grow, man. He’s a man now and he’s always done it right.”

The questions hanging over Virginia Tech’s offense going into its season opener against North Carolina are the same ones they had at the start of spring camp.

How much will Braxton Burmeister benefit from an offseason full of reps at the team’s No. 1 quarterback? Can the offense come close to replacing former starting running back Khalil Herbert’s production?

The Hokies have the pieces around Burmeister to help him succeed. They are bringing back four starting linemen including center Brock Hoffman, who has been Burmeister’s roommate the last two years.

Tech also has the deepest tight end room in the conference to go with an intriguing group of receivers.

Veterans Tre Turner and Tayvion Robinson combined for 1,121 receiving yards last year and six touchdowns. They have a friendly competition going to see who can led the team in receiving yards this year — they are current tied 1-1 — while Jayden Payoute, Da’Wain Lofton and Jaylen Jones are strong candidates to have breakout seasons.

Burmeister has drawn rave reviews for his leadership during the offseason and the coaching staff continues to talk about his untapped potential as a passer. Burmeister earned some good will from fans with his performance in last year’s Commonwealth Cup, but he will be tested early in the season.

Trying to answer that second question is a bit trickier.

The position battle at running back was anticlimactic with Jalen Holston and Raheem Blackshear staying atop the depth chart the whole way through the offseason. Tech still hasn’t hinted how they will split up carries though and it’s not clear how much of a role Keshawn King and Marco Lee will have.

Burmiester’s mobility will ease the pressure on the running back room, but their success (or lack thereof) could make or break Tech in 2021. 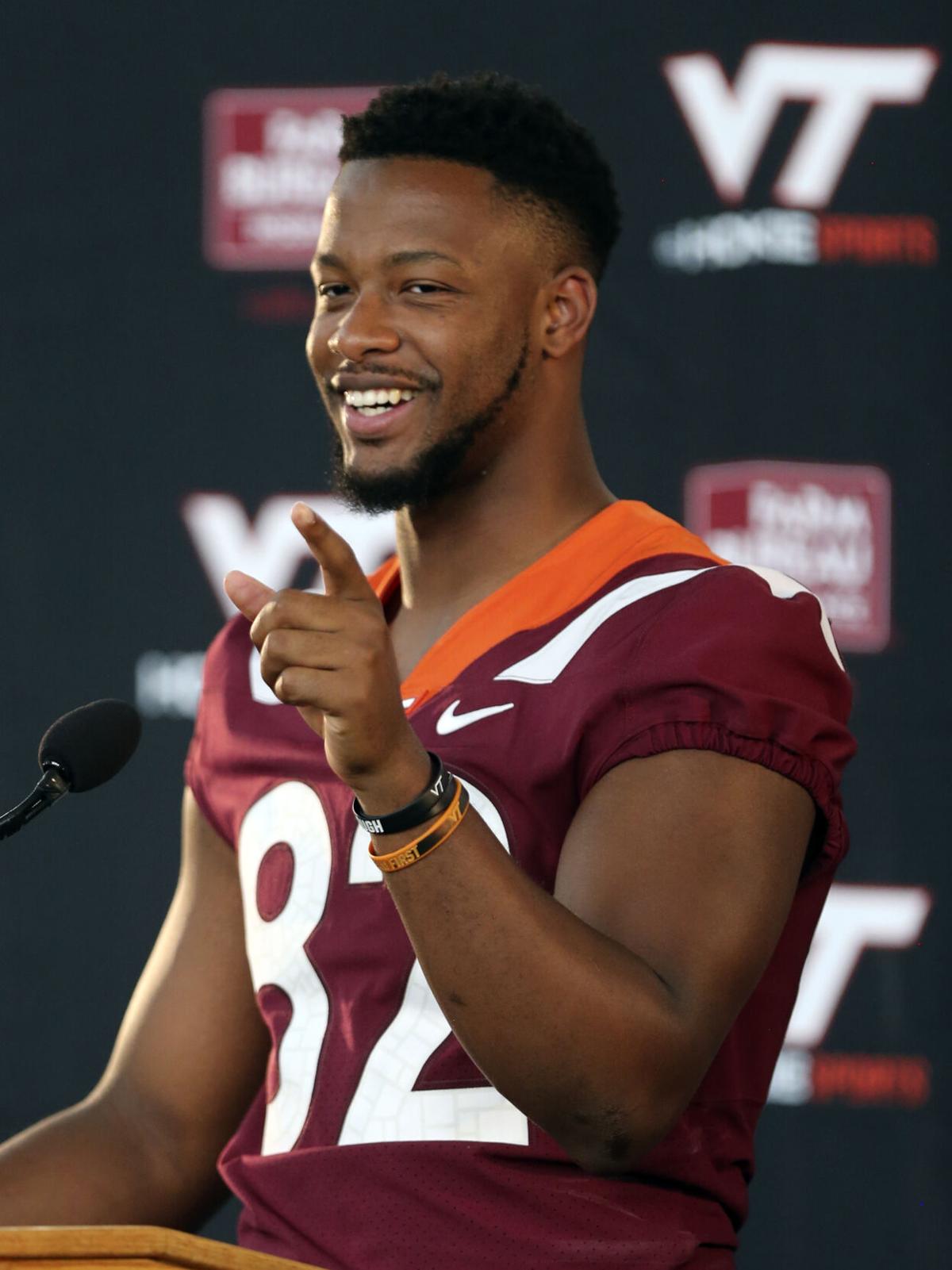 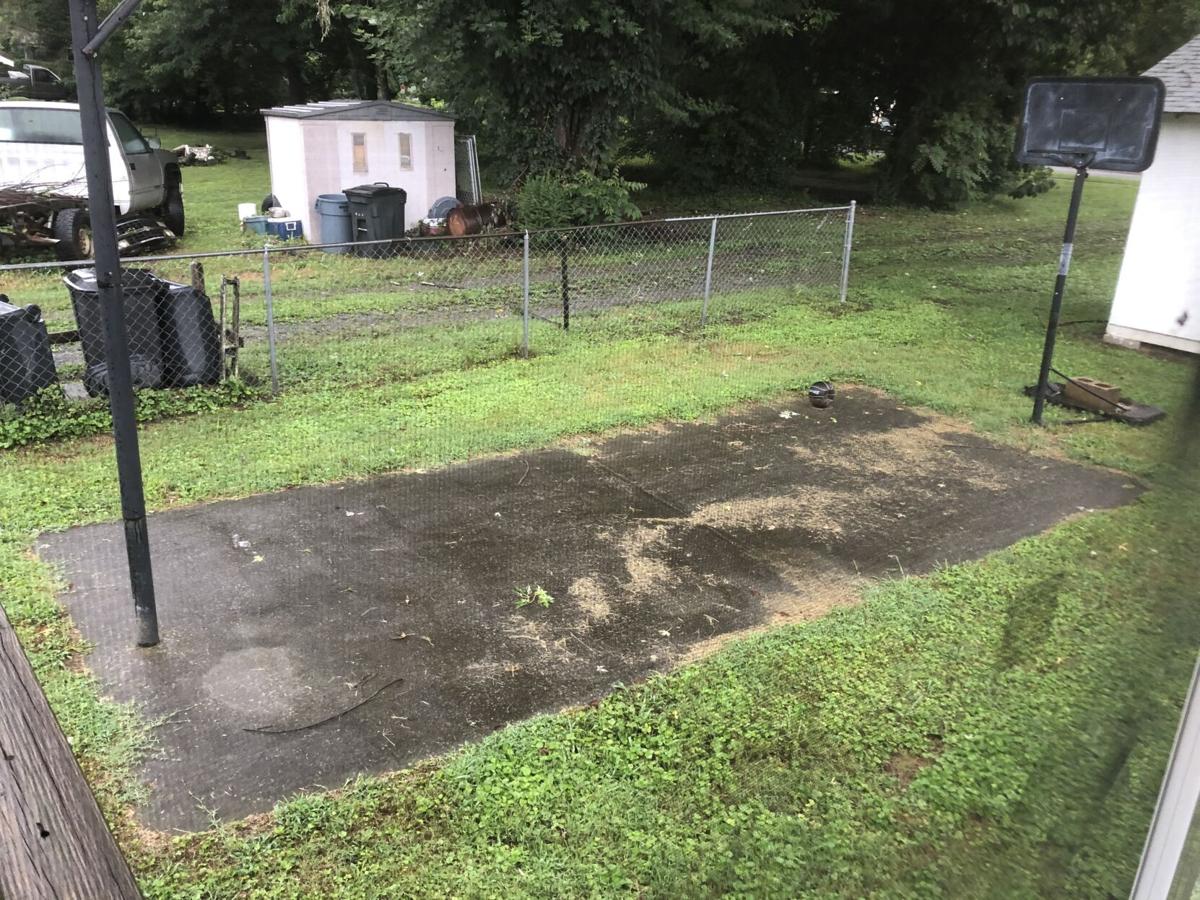 The basketball court Jimmy Mitchell made for his son, Virginia Tech tight end James Mitchell, at the family's home in Big Stone Gap. 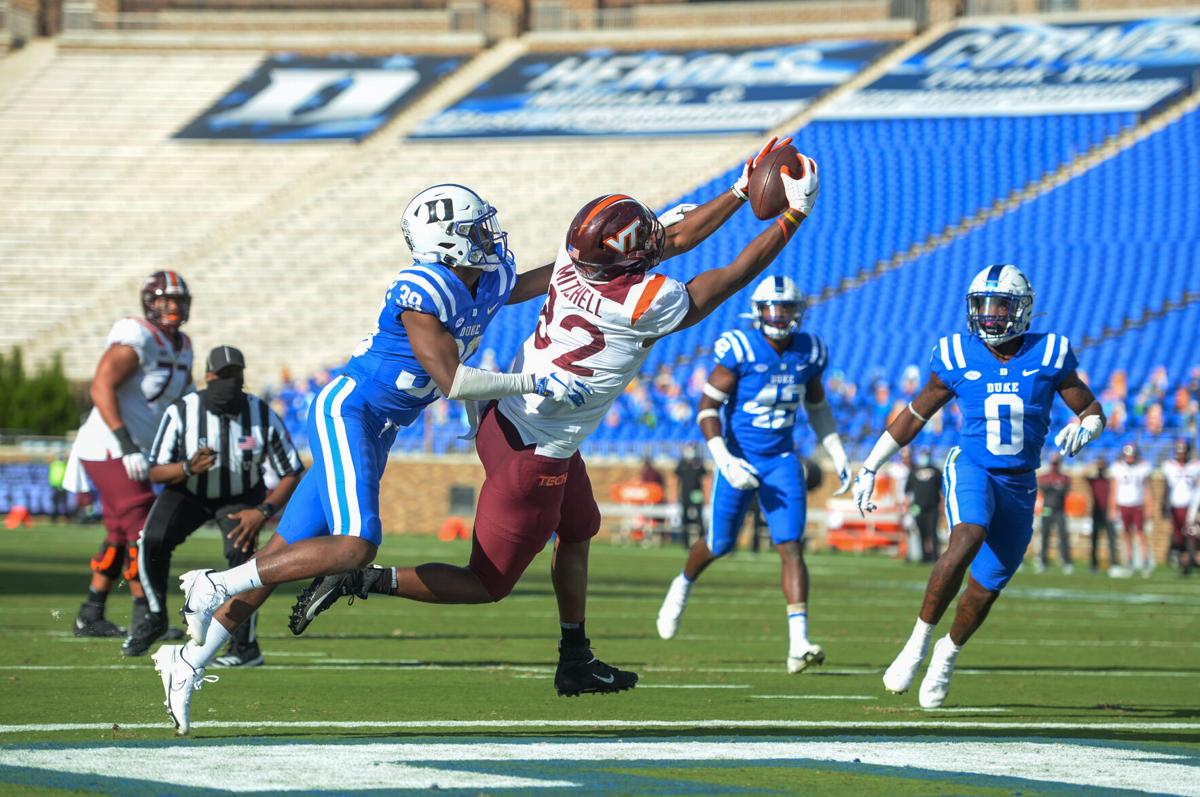 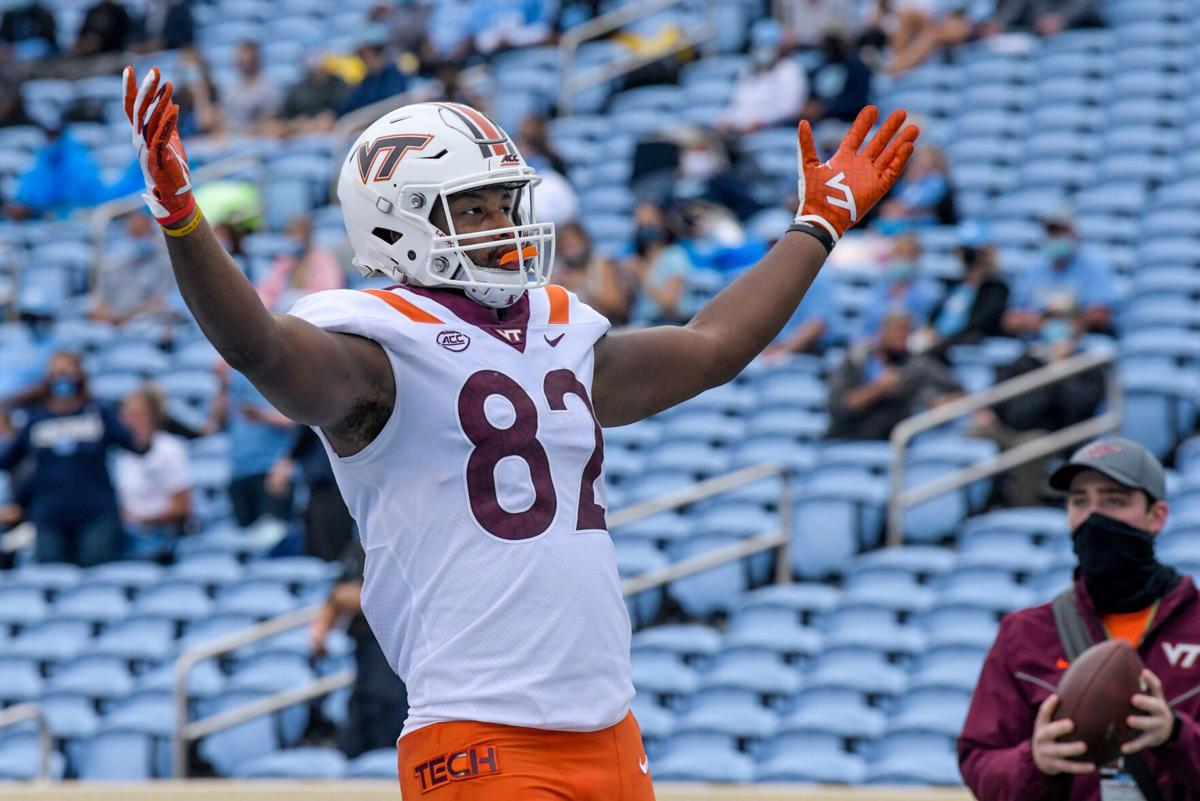 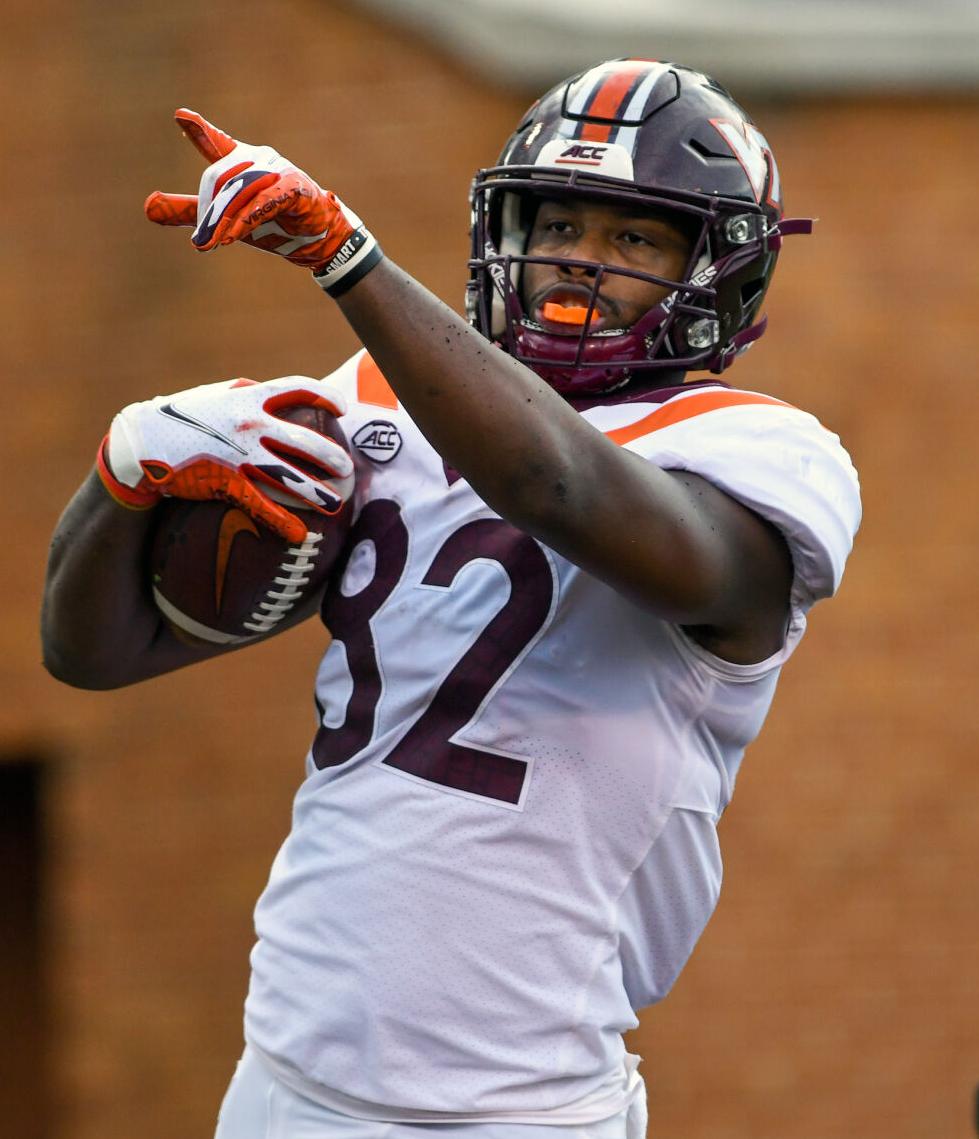