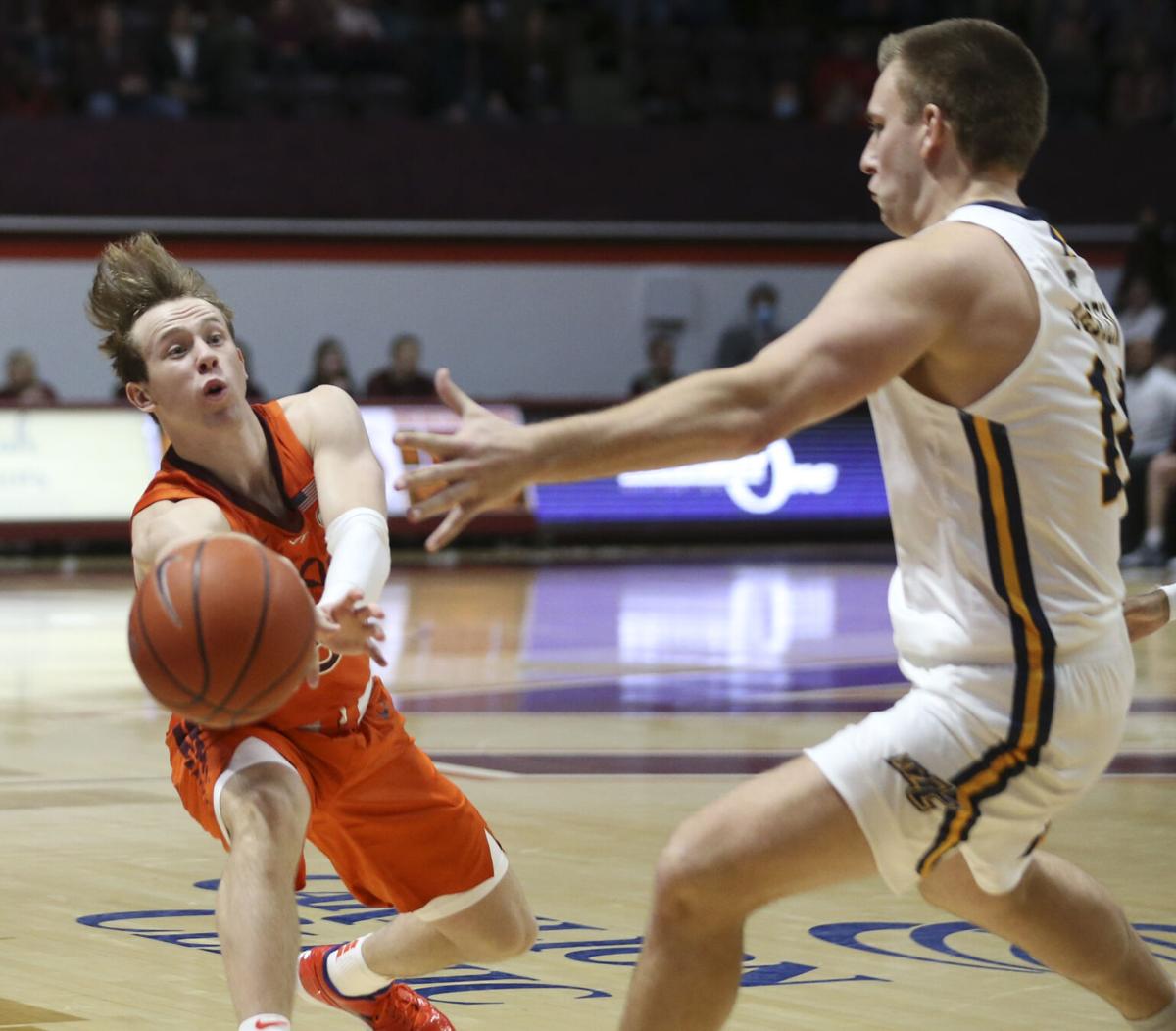 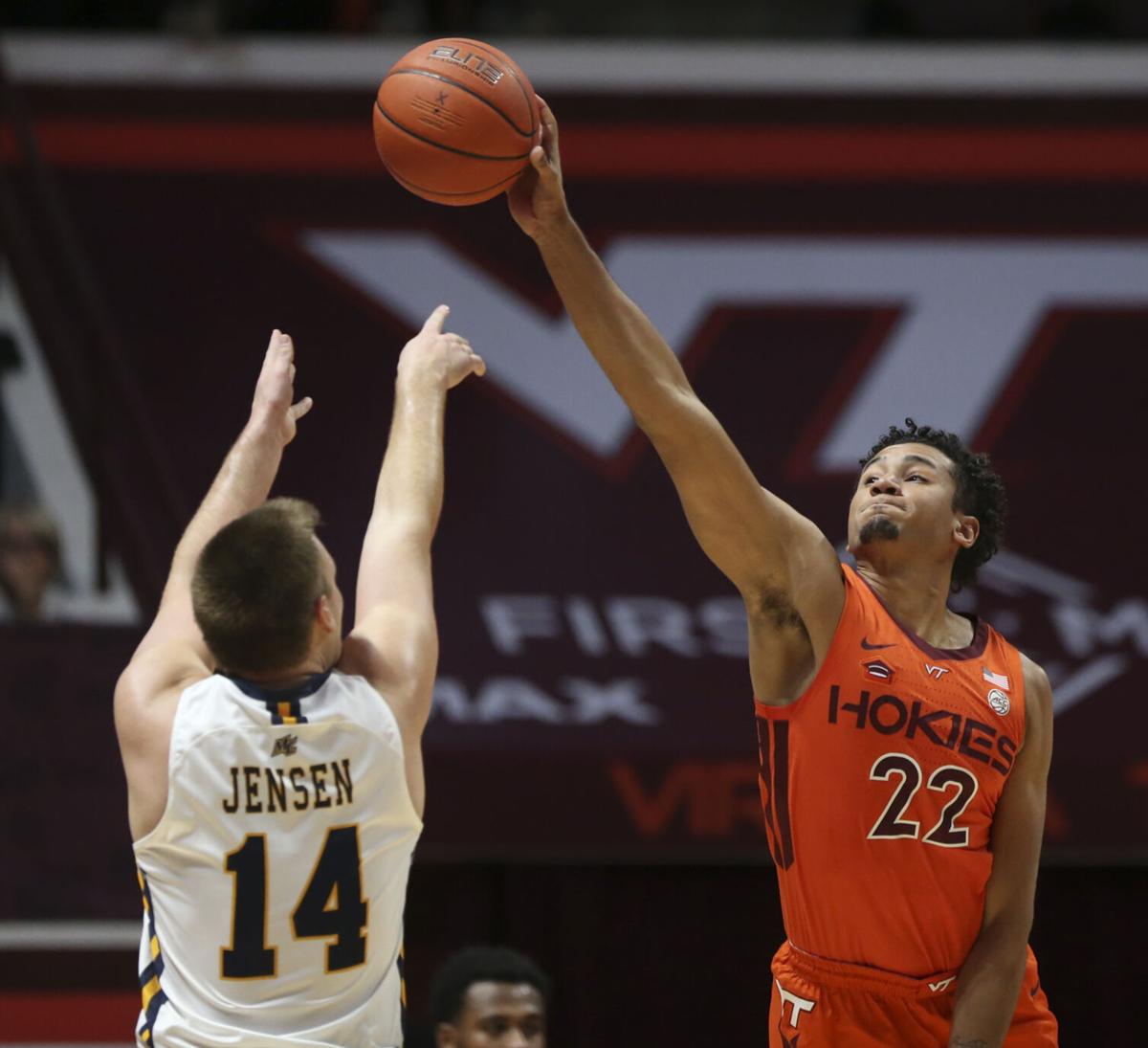 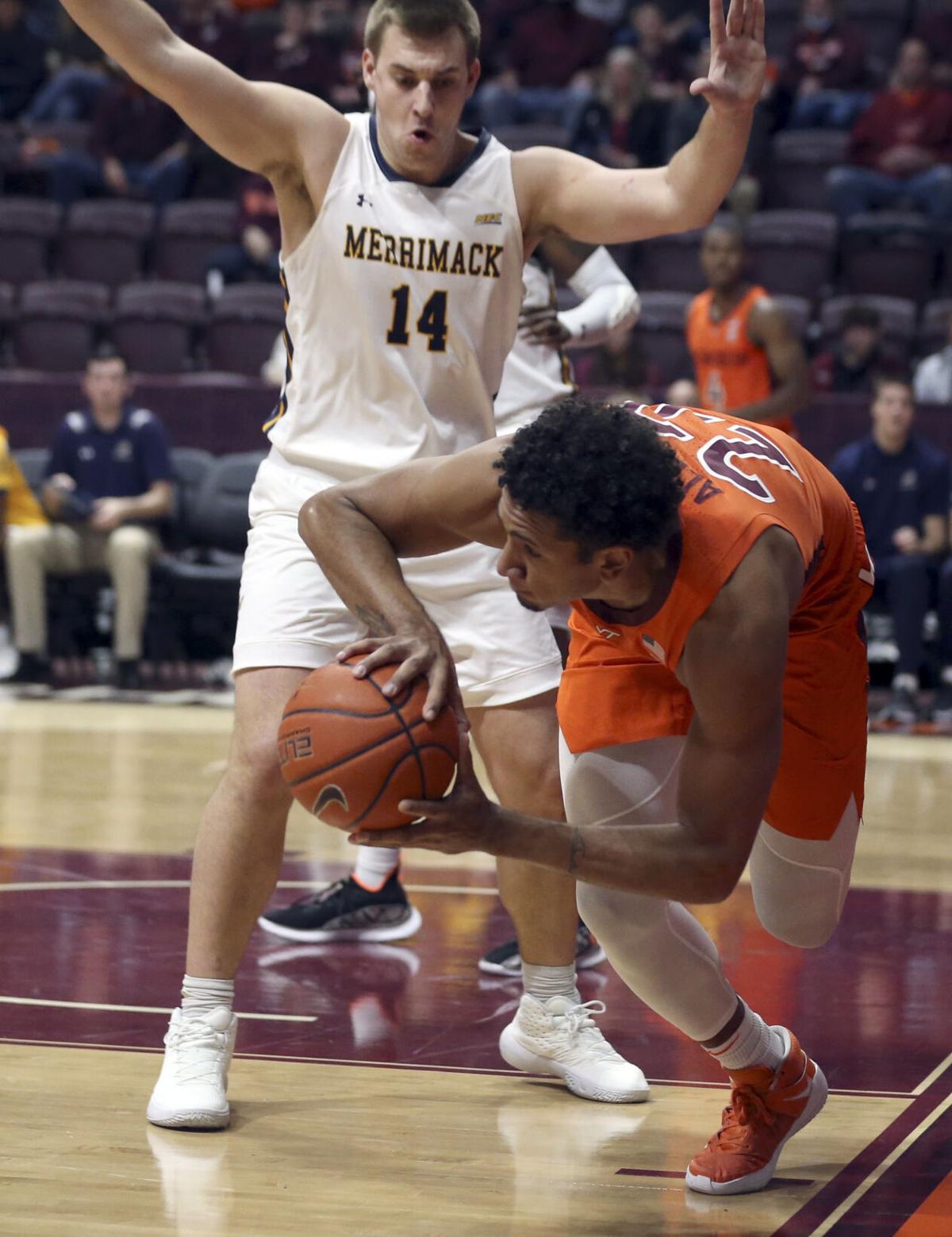 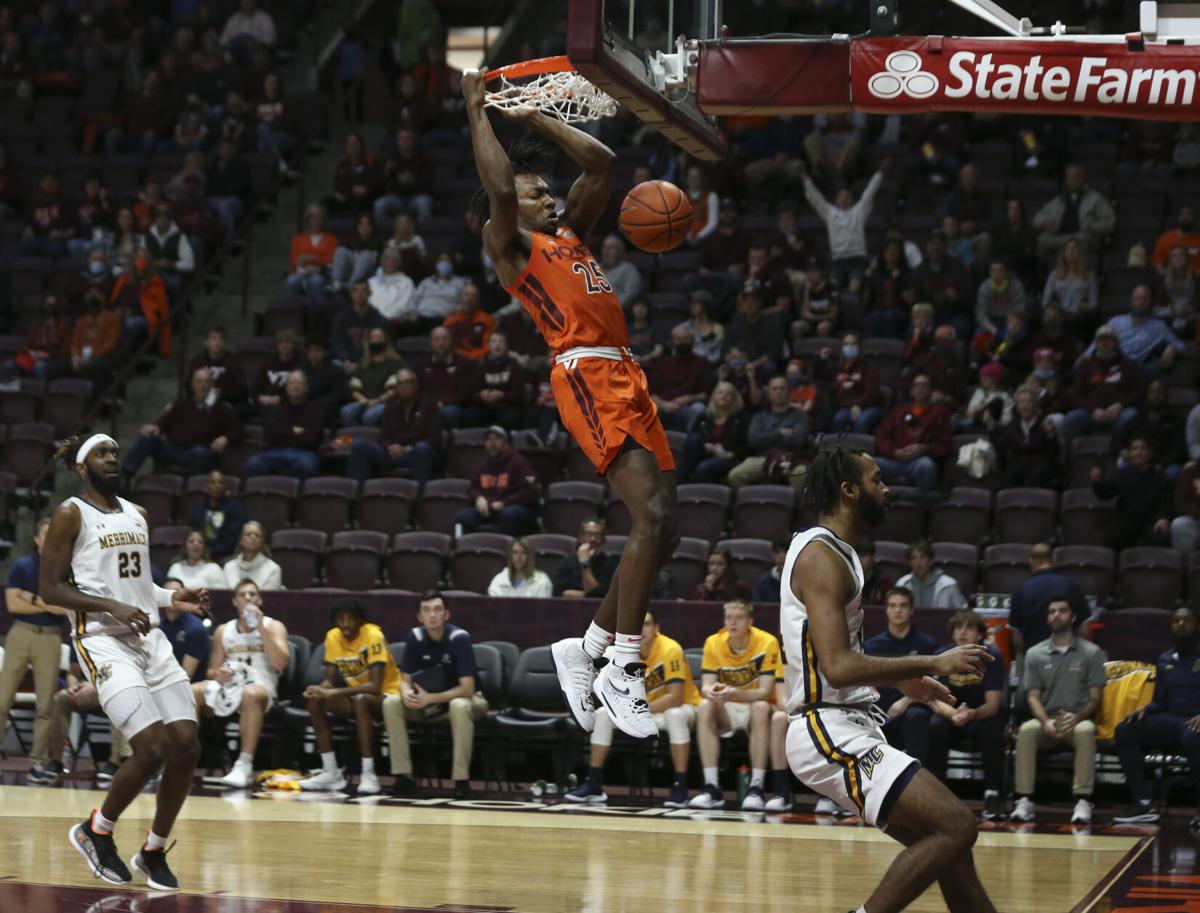 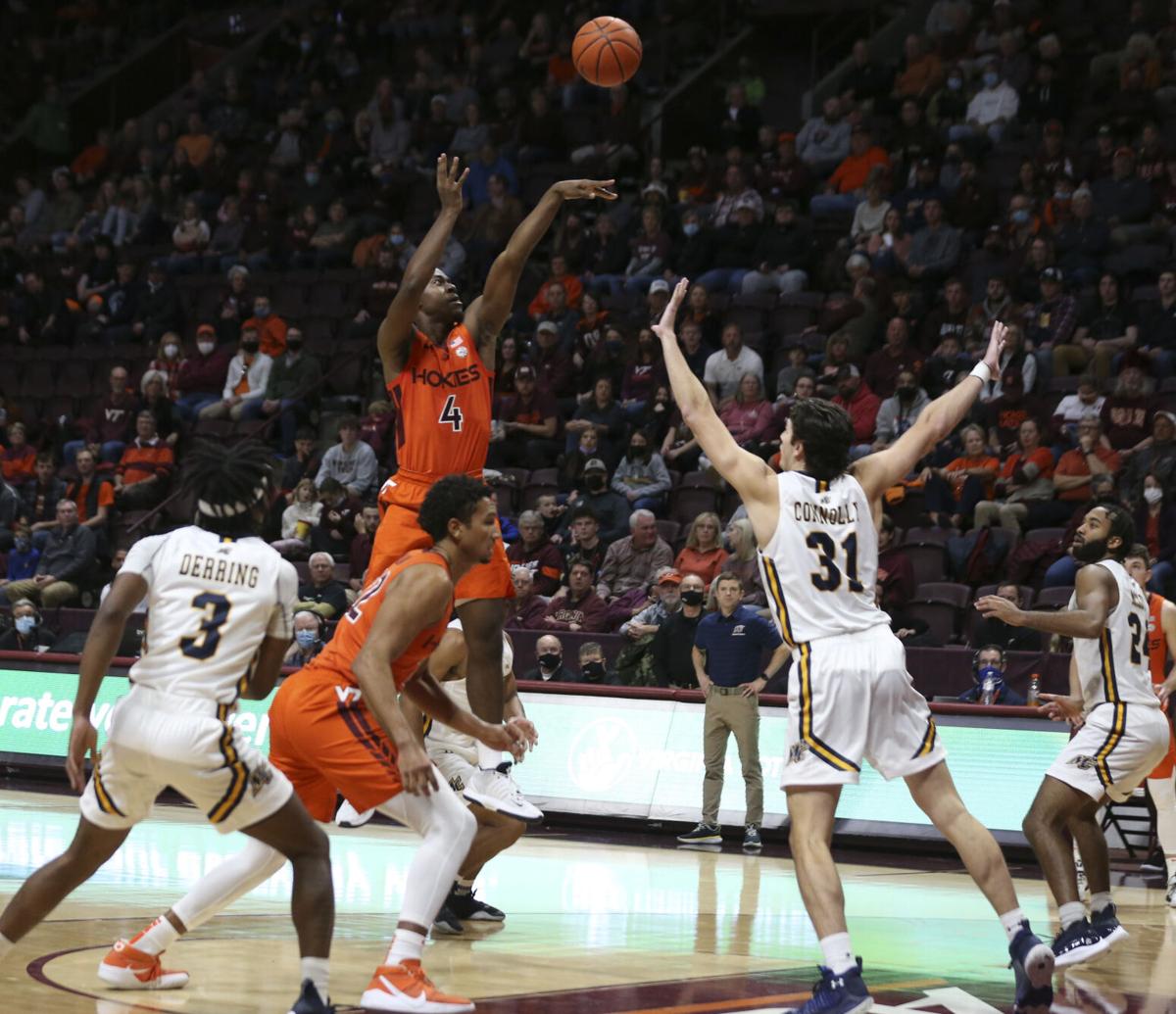 Virginia Tech’s Nahiem Alleyne shoots a 3-pointer in the Hokies’ win. He had 12 points.

But their next foe will offer a much bigger challenge.

The Hokies led from the opening basket and even got 3-pointers from their walk-ons en route to a 72-43 win at Cassell Coliseum.

“We did a really good job sharing the ball,” said forward Justyn Mutts, who had nine points, seven rebounds and five assists. “They ran a zone [defense] the entire game, so there were different spots that were open. And we’ve got big-time shooters that are able to knock down shots.”

Next up is a duel with No. 11 Memphis (4-0) at 9:30 p.m. Wednesday in the first round of the NIT Season Tip-Off at the Barclays Center in Brooklyn, New York.

“We’re really excited to see how we’re going to play on Wednesday,” said point guard Storm Murphy, who had 14 points. “It’s going to be a fight and we’re going to bring our ‘A’ game.

Does Tech have what it takes to pull off another upset Wednesday?

“I don’t feel like if we win the game it’s going to be an upset, because I really feel like we’re one of the best teams in the country,” said guard Nahiem Alleyne, who had 12 points Sunday.

The Tigers (4-0) are steered by former Memphis and NBA star Penny Hardaway.

Does Tech have the offense and defense to shine against not just Merrimack but Memphis as well?

“We’re about to find out,” Tech coach Mike Young said. “We’ve got our hands full, but it’s going to be a good college basketball game.”

In Tech’s previous two wins over Radford and Saint Francis, the Hokies shot worse than 38% from the field in the first half before warming up in the second half.

“We were moving the ball, being well-connected, setting screens, … ‘one more’ passes, not looking for the good shot but the great shot,” Alleyne said.

Tech shot 50% from the field in the second half.

The Hokies were 11 of 23 from 3-point range. Eight Hokies made at least one 3-pointer.

“We have guys that can really shoot,” Young said. “We shared, and I thought we put the ball in really good places. They were darts; there was no lag time for Merrimack to recover … and get something contested.”

Even walk-ons Camden Johnson and Ben Varga each drained a 3-pointer in the waning minutes.

“To see those two guys get shots down was pretty cool,” Young said.

The Warriors shot just 38.8% from the field.

All five of Tech’s foes this season have shot worse than 40% from the field.

“Our coaches do a great job scouting teams and getting us their plays — not only their plays but the play calls,” Mutts said. “So if they say something, we know exactly what’s about to happen and we’re able to kind of jump to the spot and beat them there.”

No team has scored more than 57 points against Tech this season.

Murphy said the players are trying to take pride in their defense.

“We know how good we are offensively and how good we can be against any defense. But for us on the defensive side, we want to continue to grow there,” Murphy said. “We heard it in the offseason, that that might be a weak spot for us. So coaches have been challenging us, and we’re really working on that every day.”

Virginia Tech’s Nahiem Alleyne shoots a 3-pointer in the Hokies’ win. He had 12 points.