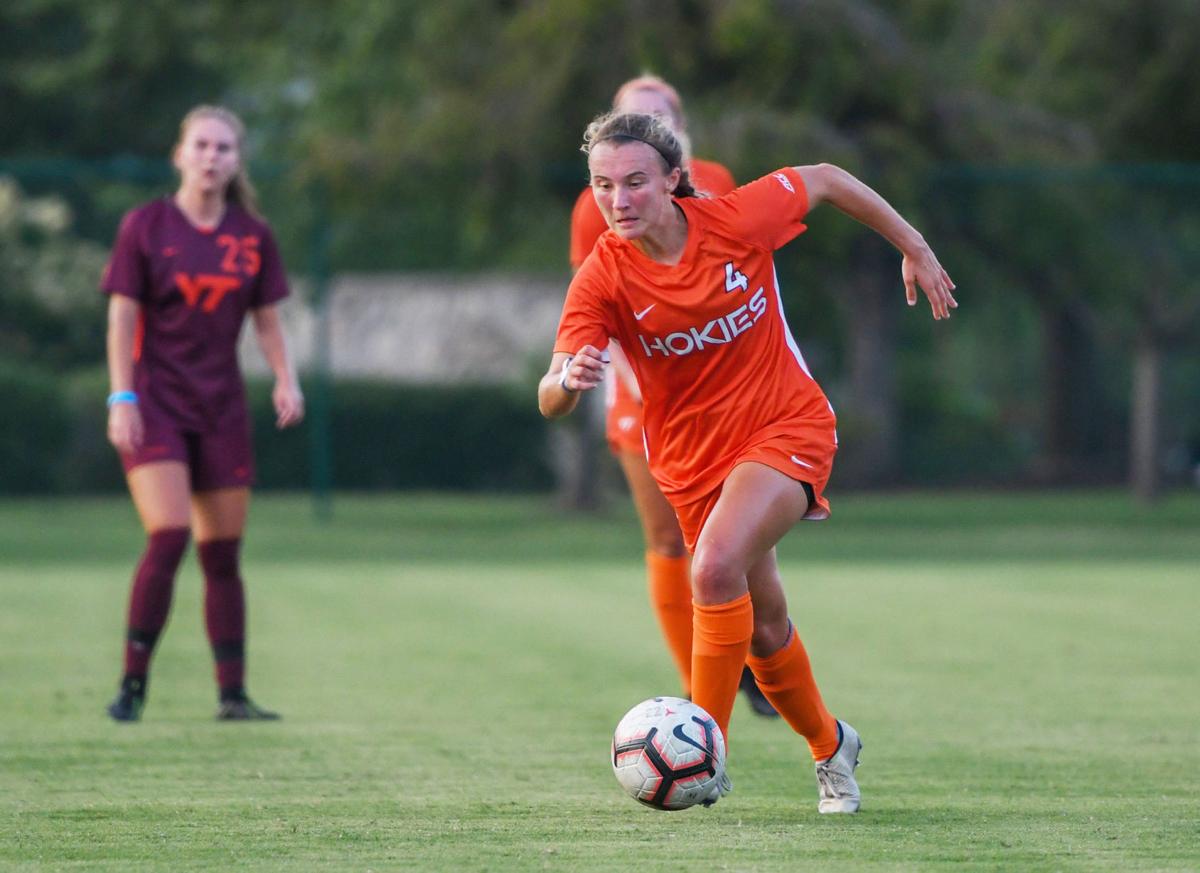 Emily Gray (4), shown in a recent intrasquad scrimmage, had four goals for Virginia Tech last year before suffering a torn ACL in the 10th game of the season. 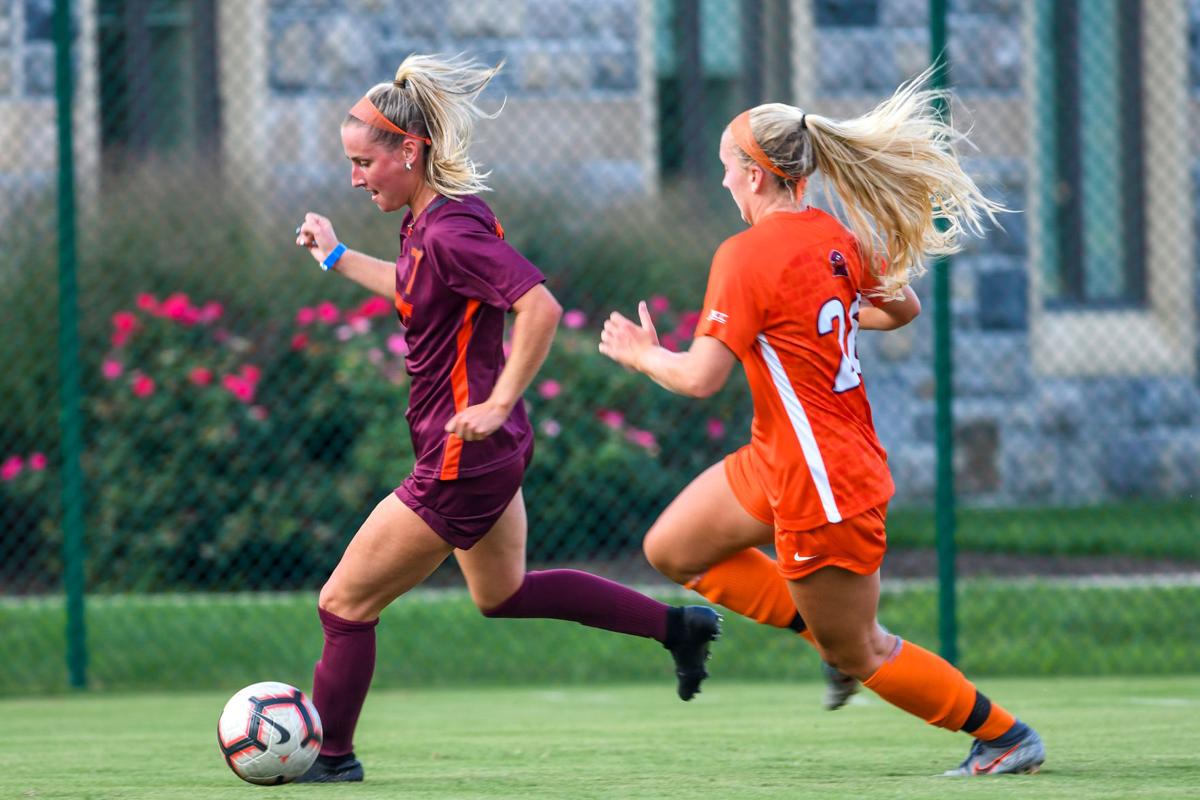 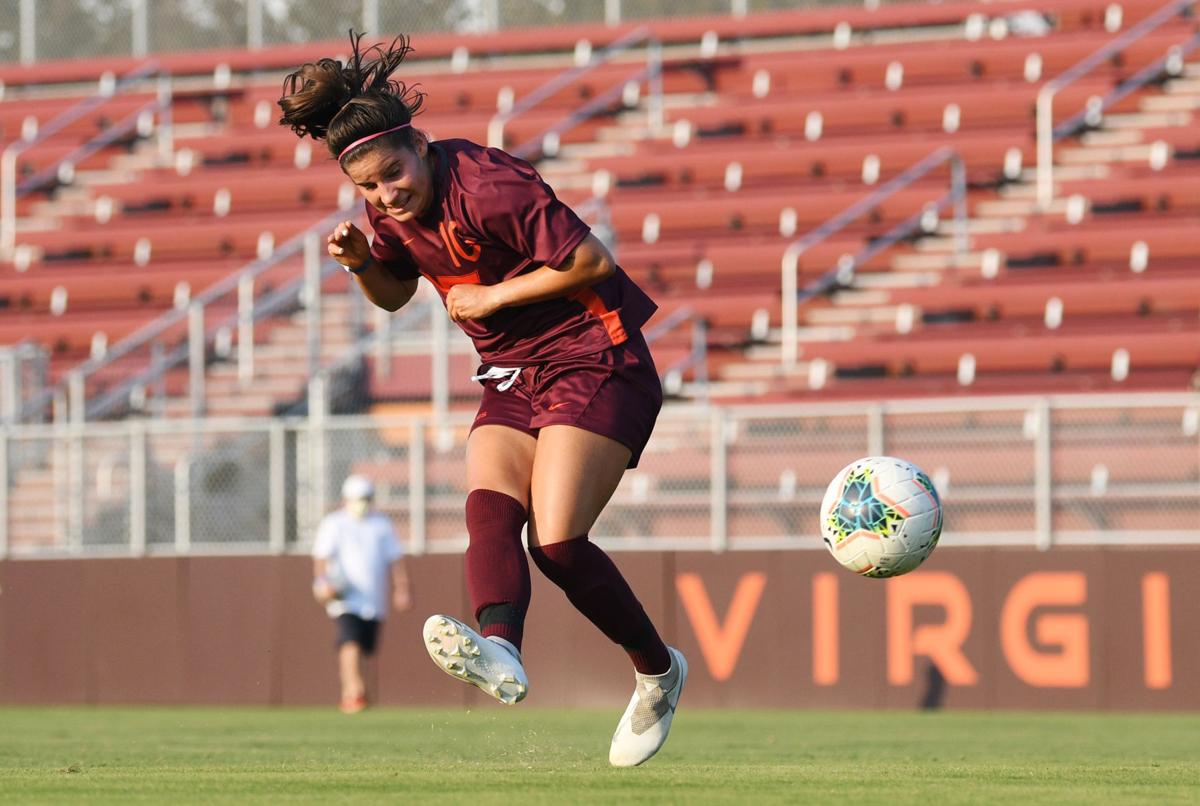 Nicole Kozlova, playing in a recent intrasquad scrimmage, had five goals for Virginia Tech last year. But she left on Wednesday for Ukraine and won’t be back until late October because of her duties playing for the Ukrainian national team. 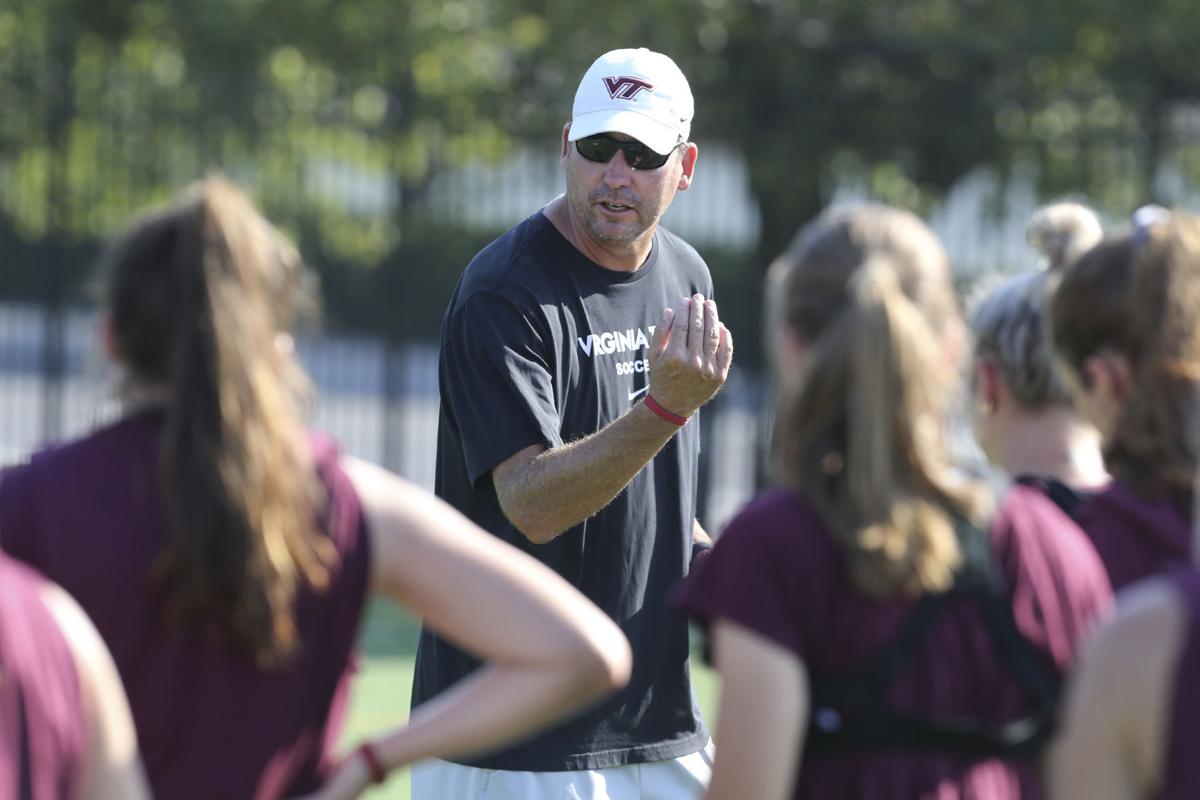 Virginia Tech coach Chugger Adair returns seven starters from a team that lost in the first round of the NCAA tournament. 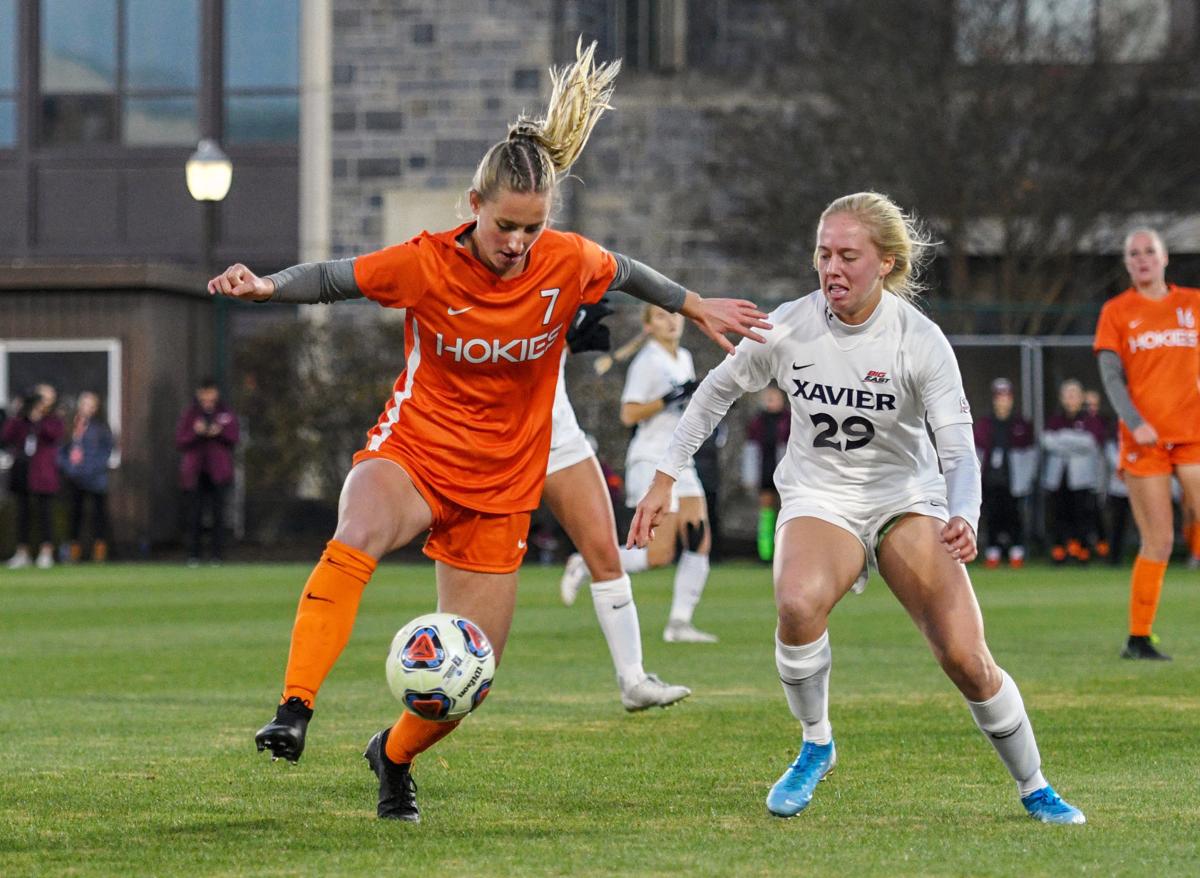 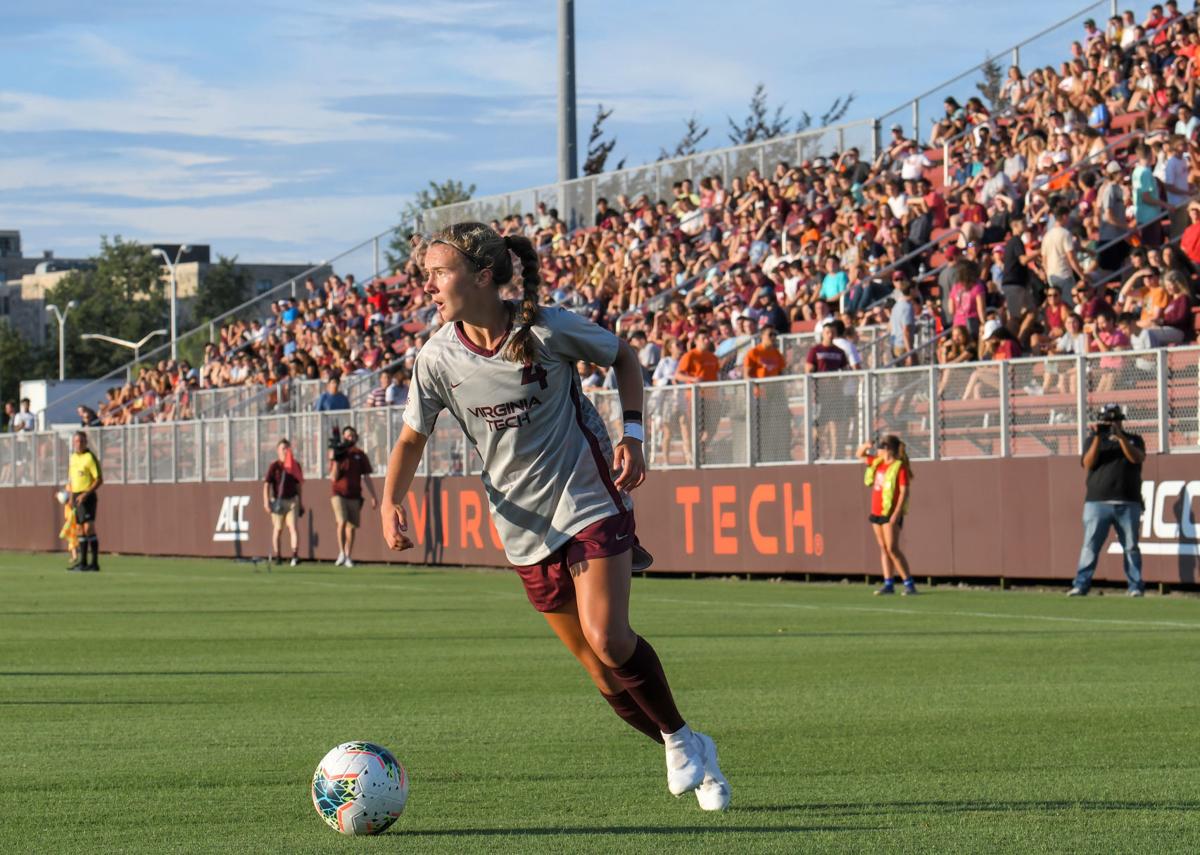 Virginia Tech midfielder Emily Gray scored four goals last year before suffering a torn ACL in the 10th game of the season. The Hokies open this season Saturday at UVa.

The Virginia Tech women’s soccer team has been training on campus since early July and has been holding practices since early August.

On Saturday, the Hokies will finally get to play a game.

Virginia Tech will visit rival Virginia at 6 p.m. Saturday in the season opener for both teams.

It will be the first game in any sport for either school since the coronavirus pandemic shut down the sports world in March.

“Super excited,” Tech junior midfielder Emily Gray said in a phone interview this week. “Our preseason has been a month and a half long, … so playing on Saturday will be pretty awesome.”

Are the Hokies nervous about going to another campus and being in close contact on the field with players from another school?

“I don’t think it’s nerve-racking at all,” junior defender Kiersten Hening said. “We feel very comfortable going to UVa on Saturday, keeping in mind that they’ve been doing everything to stay healthy and safe on their campus and we’ve been doing the same.”

Last year, the Hokies had played two exhibitions and six regular-season games by Sept. 12. But the pandemic played havoc with Tech’s 2020 schedule.

So the Hokies are opening against fellow 2019 NCAA tournament participant UVa.

“It would have been nice to play a scrimmage or two or maybe get our feet wet in nonconference a little bit to ease into it, but we’ve got to hit the ground running,” coach Chugger Adair said. “[With] COVID, … if we’re going to be exposing ourselves to the outside competition, it might as well be in a countable game.”

Most conferences have shifted their fall seasons to the spring, prompting the NCAA Division I Board of Directors to move the NCAA women’s soccer tournament to the spring as well.

But the ACC is going ahead with its fall season.

Virginia Tech will play only four nonconference games, including three against fellow ACC members. Both Saturday’s game at UVa and the Sept. 25 rematch in Blacksburg are nonleague games that will not count in the ACC standings.

There will also be an eight-team ACC tournament in Cary, North Carolina, this fall, although it remains to be seen if the league’s automatic NCAA bid will be at stake. Teams hope to play more ACC regular-season games next spring.

“It’s very different,” Gray said of the split season. “Even though it’s going to be super weird, … it’s just really awesome the presidents of the universities and the ACC has given us this opportunity to play.”

“We’ve been presented with this schedule and we have no choice but to embrace, it,” Hening said. “Our strength of schedule is pretty strong right off the bat.”

Virginia Tech has been picked eighth out of 13 teams in the ACC’s preseason coaches poll, with UNC picked first. A 14th team, N.C. State, is not playing this fall for lack of a full roster.

The Hokies return seven starters from last year’s team, which went 12-5-2 overall and 4-4-2 in ACC play. The Hokies lost in the first round of the NCAAs.

“That’s our spine that we’ve lost,” Adair said. “The central spine — Mandy, Kesley, Jordan, those three right up the middle.”

McGlynn, who recorded a school-record 32 career shutouts, is now with Sky Blue of the National Women’s Soccer League.

The starting goalie Saturday will either be freshman Alia Skinner or third-year sophomore S.A. Phillips.

Hening, the only returning starting defender, said she is not worried about the defense.

“It’s a great thing to have youth,” Hening said. “They’ll be challenged right off the bat for sure, UVa being that daunting opponent.”

Tech could use a more potent offense this year. The Hokies ranked 11th out of 14 ACC teams in goals (26) last fall.

“Be more consistent scoring goals, that’s something we’ve got to focus on,” Adair said.

Nicole Kozlova, who scored a team-high five goals last year, flew to Ukraine on Wednesday and will not rejoin the Hokies until late October.

Kozlova is from Canada, but she plays for the Ukrainian national team because her parents are from Ukraine.

The third-year sophomore forward will be playing in qualifiers for the UEFA European Championships next week and in late October. Because of the pandemic, she will remain overseas until all her qualifiers are over.

“It’s a huge opportunity for her,” Adair said. “Disappointing we don’t have her services.”

Gray ranked second on the team last year with four goals, despite missing the final nine games of the season. She suffered a torn ACL at UVa last September.

“Being on the sideline isn’t fun, but it was a learning experience to overcome something,” Gray said. “I feel 100%.

“I worked really hard to come back.”

The Hokies are 3-1 in season openers under Justin Fuente, but they’ve never had their preparation disrupted anything like it has been for this one.

Emily Gray (4), shown in a recent intrasquad scrimmage, had four goals for Virginia Tech last year before suffering a torn ACL in the 10th game of the season.

Nicole Kozlova, playing in a recent intrasquad scrimmage, had five goals for Virginia Tech last year. But she left on Wednesday for Ukraine and won’t be back until late October because of her duties playing for the Ukrainian national team.

Virginia Tech coach Chugger Adair returns seven starters from a team that lost in the first round of the NCAA tournament.

Virginia Tech midfielder Emily Gray scored four goals last year before suffering a torn ACL in the 10th game of the season. The Hokies open this season Saturday at UVa.