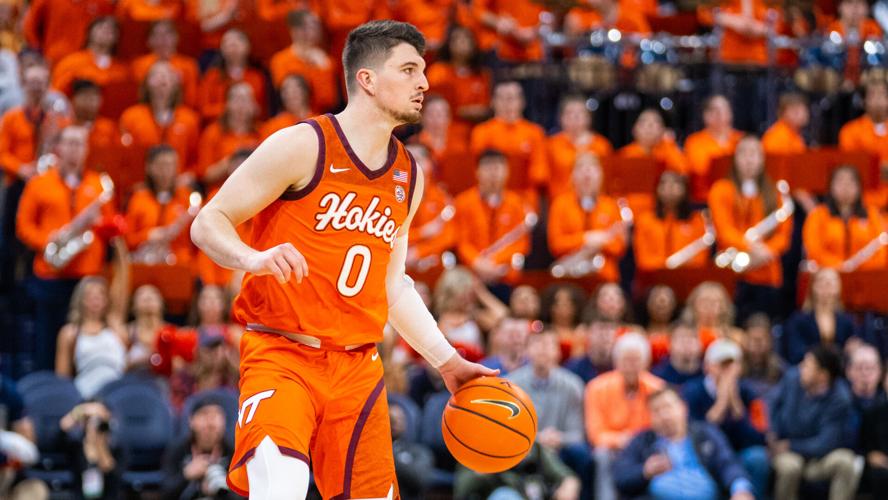 Virginia Tech guard Hunter Cattoor is shown in Wednesday’s loss at Virginia. The game marked his return to action after suffering a fractured elbow in a Dec. 21 loss. 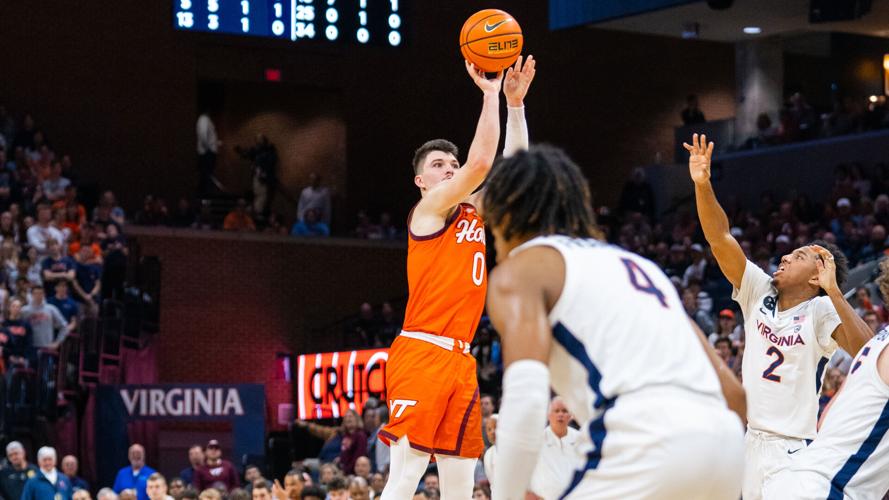 Virginia Tech guard Hunter Cattoor puts up a shot in his team's loss at Virginia on Wednesday. He had 11 points in the game. It was his first game since suffering a fractured elbow in a Dec. 21 loss. 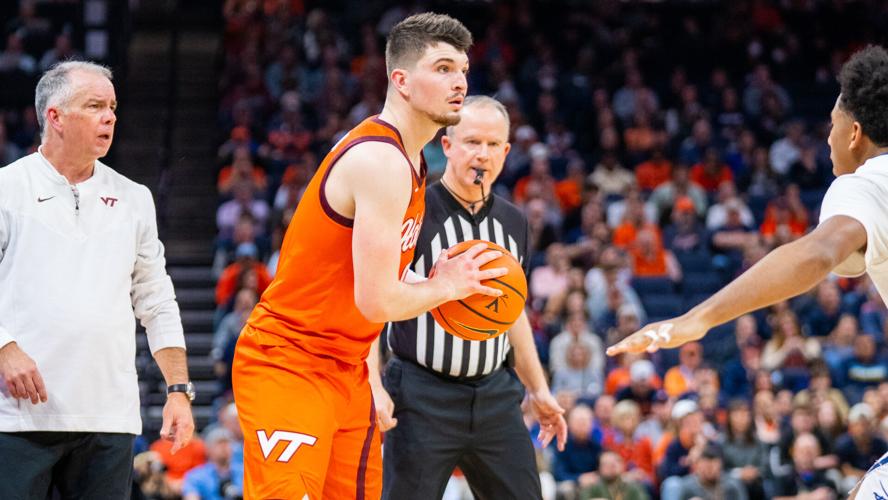 Virginia Tech guard Hunter Cattoor is shown in Wednesday's loss at Virginia Tech, as Tech coach Mike Young (left) looks on from the sideline. It was Cattoor's first game back since he suffered a fractured elbow in a Dec. 21 game.

Even though he returned to action Wednesday night, Virginia Tech guard Hunter Cattoor does not yet feel 100%.

That’s understandable. It turns out the injury he suffered last month was not merely a bruised elbow.

Cattoor revealed Friday that he suffered a fractured elbow in a Dec. 21 overtime loss at Boston College.

“I left straight from Boston [to go] back home [for Christmas break], so I went home and got the X-rays,” he said Friday on a video conference. “At first we thought it was going to be just a bone bruise. And then we got another X-ray … and it turned out to be a fracture. So it was just tough going through that.

“I missed … four weeks, so it’s a blessing. It could’ve been more,” he said. “I didn’t need any surgery or to be in a cast. … You just had to get movement back in the elbow.”

In his return Wednesday, Cattoor had 11 points, three 3-pointers, six rebounds and five assists in 34 minutes in a 78-68 loss at No. 10 Virginia.

“I was excited to be back out there with my teammates, fighting again,” Cattoor said. “I didn’t feel 100% myself out there but was just trying my hardest and giving it my all.

“I’m getting there. It’s going to be day by day, just getting back into it and getting my feet under me. I felt fine in the game cardio-wise.”

“He’s very close,” Young said in the Dec. 31 postgame press conference. “I just thought it was in his best interest and our team’s best interest to hold onto him for a night here. He’s still a little tender, he’s still got some bruising on that elbow. … We caught a break. It could’ve been a lot worse.”

Young was then asked in that Dec. 31 postgame press conference if the injury just wound up being a bruise.

“Yeah,” Young said at the time.

But the injury turned out to be a fracture.

“It’s never fun missing time and watching games from the sideline, but it gives you new perspective on basketball and kind of on life and just being grateful for the time to be out there,” said Cattoor, a senior who is averaging 9.7 points.

The Hokies missed Cattoor, who is the team’s 3-point ace and best perimeter defender. They will carry a six-game losing streak into a 6 p.m. Saturday game at No. 19 Clemson (15-4, 7-1 ACC).

Cattoor had to watch from the bench when the Hokies suffered a 68-65 home loss to Clemson on Jan. 4.

“We took a lot of bad shots that game,” Cattoor said. “In our offense, if you take a bad shot, that’s like a turnover for us, with our play style.

Without Cattoor, Young went with a bigger starting lineup than usual in the loss to Clemson. Lynn Kidd started at center, with Grant Basile and Justyn Mutts at the forward spots. But Clemson had a big frontcourt of its own.

“It helps that Hunter Cattoor’s not playing,” Clemson coach Brad Brownell said after that game. “He’s an outstanding player and stretches the defense that way. And so it becomes a big-body game. … It’s just physical. There’s not as much space. There’s big bodies on top of you. You’ve got to play really good one-on-one interior defense. I thought we did that.”

With Cattoor back on Wednesday, Virginia Tech had its best offensive showing of the losing streak. Tech shot 49.1% from the field and made 12 3-pointers. Tech also had 19 assists and just eight turnovers.

“Our team played a lot better offensively,” Cattoor said. “The ball was moving a lot more.

“Defensively, I think we still need to take a couple steps up.”

Cattoor left Wednesday’s game late in the first half when he appeared to hurt his left arm again. He returned from the locker room a few minutes later and checked himself back into the game.

“Kind of got my arm in between a screen and it kind of got sandwiched,” he said. “Went through the play, made the shot, and … when I got back on defense, a little shock went through my arm. … It scared me for a little bit, but it felt fine.”

The Tigers are coming off their first ACC loss of the season — an 87-77 loss Tuesday at Wake Forest.

Clemson guard Chase Hunter (14 ppg) missed Tuesday’s loss with a ligament injury in his foot. Brownell said after Tuesday’s loss that there was a chance Hunter could be back against the Hokies. Hunter had 12 points in his team’s win over the Hokies.

The Tigers had won seven straight games prior to Tuesday’s loss, including victories over North Carolina State and Duke.

"By far the best moment I've had in my career so far," the Christiansburg grad said.

The Hokies carry a seven-game losing streak into the rematch of the 2022 ACC Tournament final.

Virginia Tech guard Hunter Cattoor is shown in Wednesday’s loss at Virginia. The game marked his return to action after suffering a fractured elbow in a Dec. 21 loss.

Virginia Tech guard Hunter Cattoor puts up a shot in his team's loss at Virginia on Wednesday. He had 11 points in the game. It was his first game since suffering a fractured elbow in a Dec. 21 loss.

Virginia Tech guard Hunter Cattoor is shown in Wednesday's loss at Virginia Tech, as Tech coach Mike Young (left) looks on from the sideline. It was Cattoor's first game back since he suffered a fractured elbow in a Dec. 21 game.