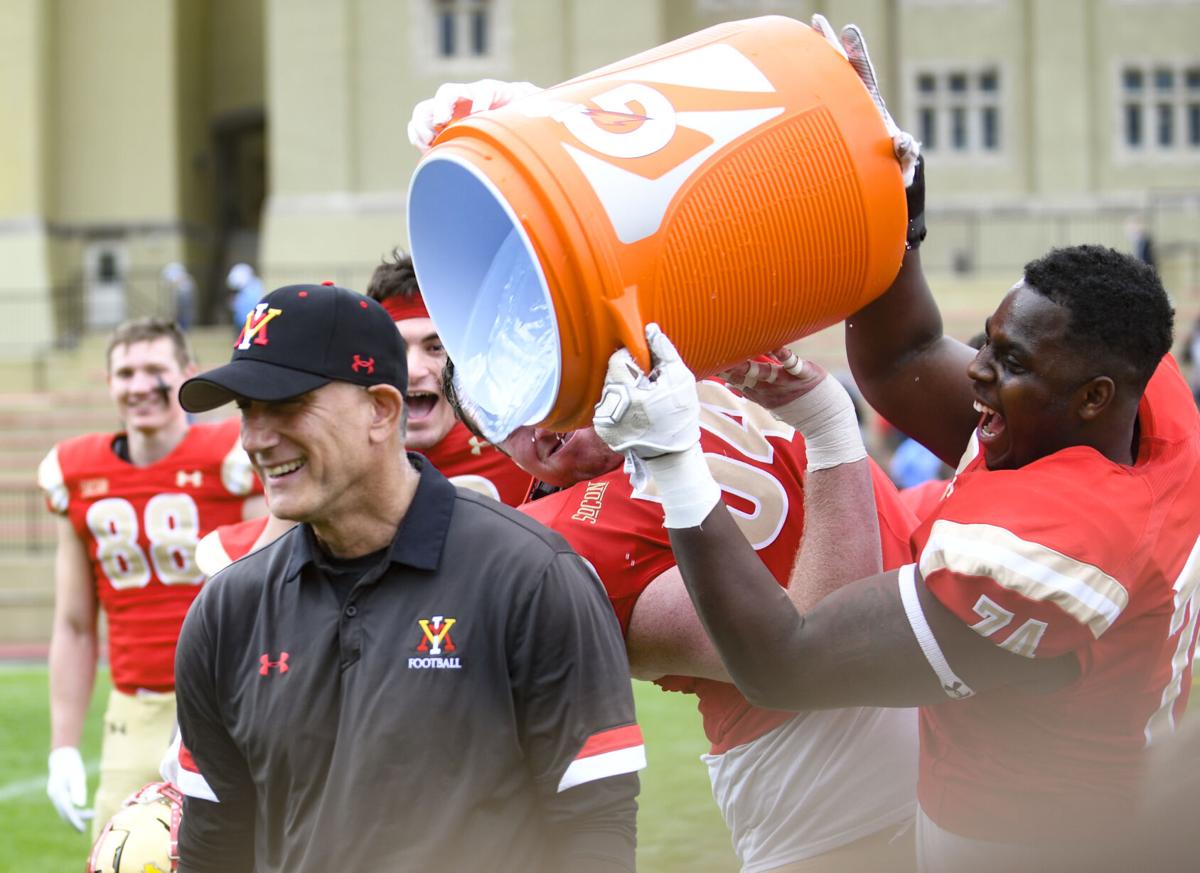 VMI’s Scott Wachenheim (left), shown as he is about to get doused with water after his team beat The Citadel to win the Southern Conference title, has been named the FCS coach of the year.

VMI’s Scott Wachenheim (center) has won the Eddie Robinson Award, which goes to the FCS coach of the year. He led VMI to its first FCS playoff berth. 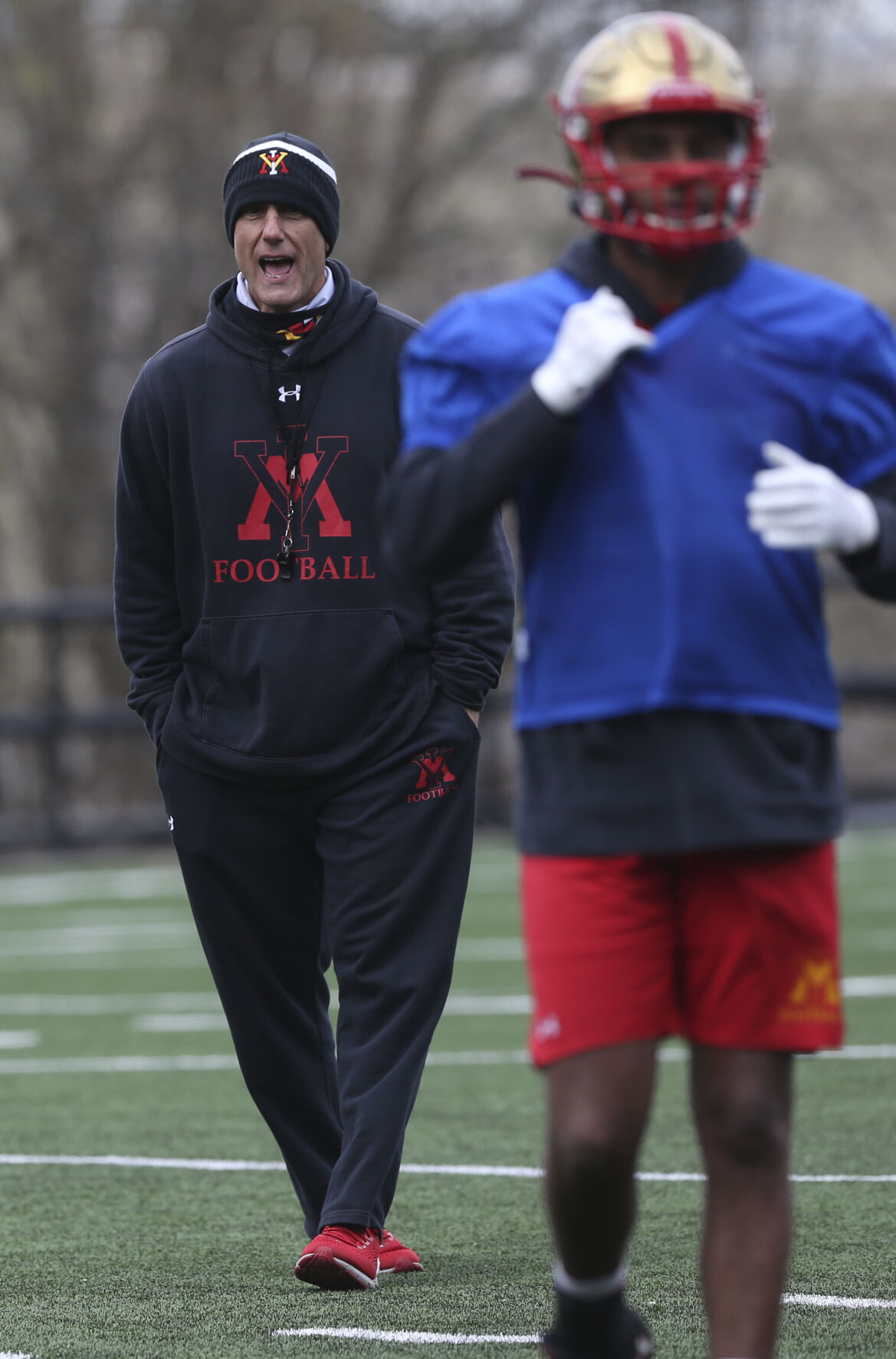 VMI coach Scott Wachenheim (left) steered the 6-2 Keydets to their first winning season since 1981, when they still played major-college football. 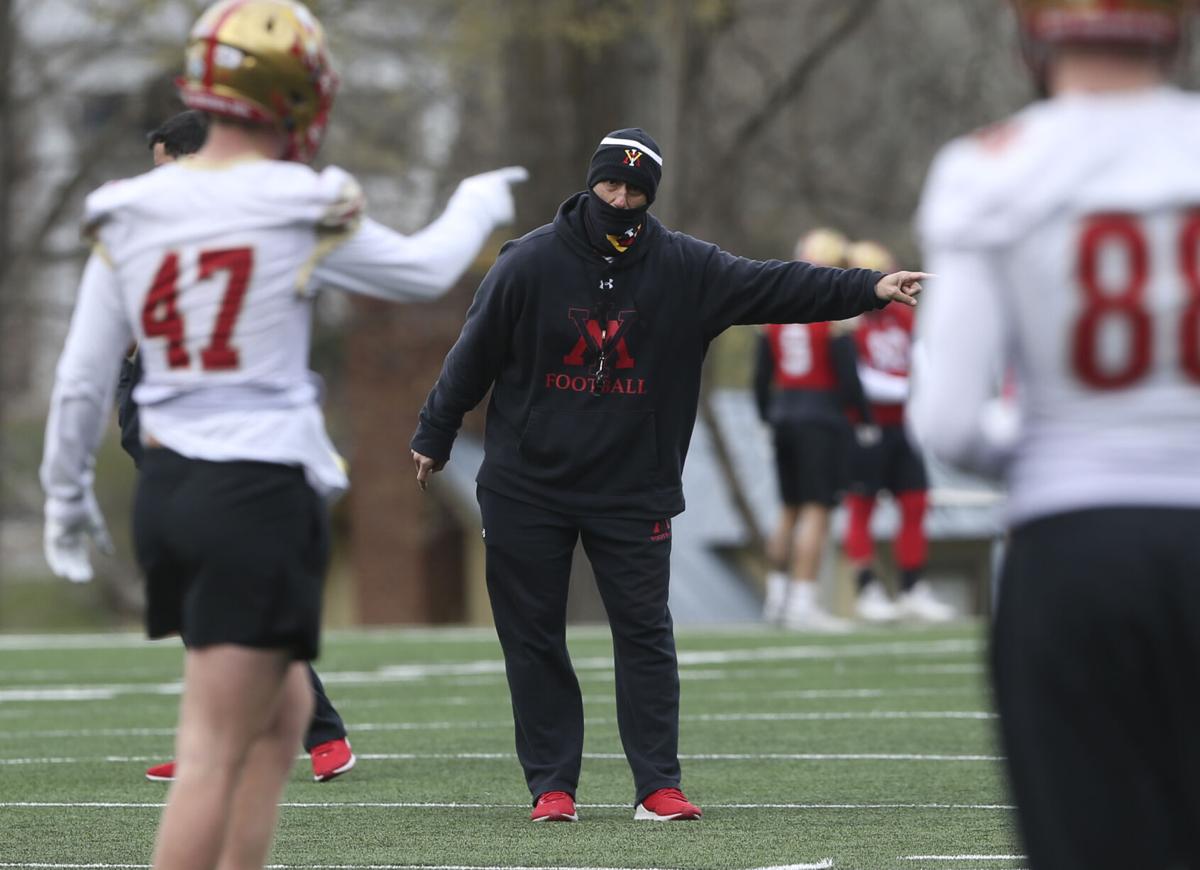 VMI coach Scott Wachenheim (center) won just six games in his first four seasons at the school but led VMI to five wins in 2019 and six wins this spring.

VMI’s historic season did not go unnoticed by the voters of the Eddie Robinson Award.

Keydets football coach Scott Wachenheim earned a national honor Tuesday when he was named the winner of the 34th annual Eddie Robinson Award, which goes to the FCS coach of the year.

“It’s a tremendous honor, … especially when you consider it’s named after Coach Robinson, arguably the greatest coach of all time,” Wachenheim, 58, said in a phone interview.

The Keydets went 6-2 this spring, when they advanced to the FCS playoffs for the first time.

VMI enjoyed its first winning season since 1981, which was the program’s last year of major-college football.

“People recognize that this was a difficult accomplishment,” Wachenheim said.

“Our whole team and coaching staff has bought into the culture of this team. That’s why you’re seeing a better performance,” said Wachenheim, who was named the SoCon coach of the year for the second straight season.

The Eddie Robinson Award was voted upon by a 40-member media panel.

Delaware’s Danny Rocco, who was once Wachenheim’s boss at Liberty, finished third with 63 points.

“I would not be the coach I am today if I didn’t work for Danny,” Wachenheim said.

Davidson’s Scott Abell, formerly the Washington and Lee coach, was fifth with 43 points.

“He’s a guy that, when I have a question about how to handle a situation, I’m going to reach out to very quickly,” Wachenheim said.

Abell’s Davidson team will visit VMI to kick off the fall 2021 season. There will also be nonleague road games against Cornell and Mid-American Conference member Kent State.

James Madison’s Curt Cignetti, whose team beat VMI in the first round of the FCS playoffs, was seventh in the Eddie Robinson Award voting.

This was Wachenheim’s sixth season at the helm of the Keydets. He went 6-38 in his first four years, including an 0-11 record in 2017.

Wachenheim changed his program after the winless season. He installed the no-huddle, pass-happy Air Raid offense. He also asked his players to come up with the program’s mission statement and core values.

“You’ve got to develop a culture that is player-supported,” Wachenheim said.

“Stay true to your beliefs,” Wachenheim said. “If you believe something’s the right course of action, stay true to it and don’t be afraid to fail.

“I thought you saw a much more competitive product and anybody that looked at realistically what we were accomplishing could see that and knew that the turnaround was just around the corner.

“I was very confident in the direction that we were heading.”

The stunning turnaround began in 2019, when the Keydets went 5-7 overall (with two of those losses coming to FBS foes) and 4-4 in SoCon play for their most overall wins since 2003 and their most league wins since 1979. VMI won at East Tennessee State in September 2019 to snap a 22-game SoCon losing streak. The team beat The Citadel for the first time since 2002.

“We played much improved defense [this spring],” Wachenheim said.

Wacheheim is hungry for more wins.

“I’m very proud of what our team did, but now … I’m looking to go out and sustain the excellence that we had this year,” he said.

His recruiting pitch has been enhanced.

“Now we can tell them, ‘Not only do you get to play Division I FCS football in the Southern Conference, you get to play at a championship level,’” Wachenheim said. “Now they’ve got a SoCon trophy they’re going to walk by on their official visit.”

VMI cracked the FCS Top 25 polls in March for the first time in its history. The Keydets finished 11th in the final regular-season polls.

The team opened this season by beating then-No. 10 Furman for its first win over a ranked foe since 2002 and its first victory over the Paladins since 2014.

The next weekend, the Keydets beat Mercer for the first time since 2015.

VMI improved to 4-0 with an overtime win at Samford, marking the team’s first road win in that series. But star quarterback Reece Udinski suffered a season-ending ACL injury in that win, although he did finish the game.

The Keydets won at Wofford in redshirt freshman QB Seth Morgan’s starting debut to snap an eight-game skid in that series. It was VMI’s first road win in the series. VMI improved to 5-0 for the first time since 1960.

After falling to ETSU, VMI bounced back to beat The Citadel and clinch the SoCon’s automatic playoff bid. This is the first time VMI has won back-to-back games in the rivalry with The Citadel since 1995 and 1996.

Ten offensive players who started in the playoff loss are set to return, along with six defensive starters.

The top five vote-getters for the Eddie Robinson Award, with first-place votes in parentheses and total points.

Plus lacrosse, softball and more.

VMI’s Scott Wachenheim (left), shown as he is about to get doused with water after his team beat The Citadel to win the Southern Conference title, has been named the FCS coach of the year.

VMI’s Scott Wachenheim (center) has won the Eddie Robinson Award, which goes to the FCS coach of the year. He led VMI to its first FCS playoff berth.

VMI coach Scott Wachenheim (left) steered the 6-2 Keydets to their first winning season since 1981, when they still played major-college football.

VMI coach Scott Wachenheim (center) won just six games in his first four seasons at the school but led VMI to five wins in 2019 and six wins this spring.