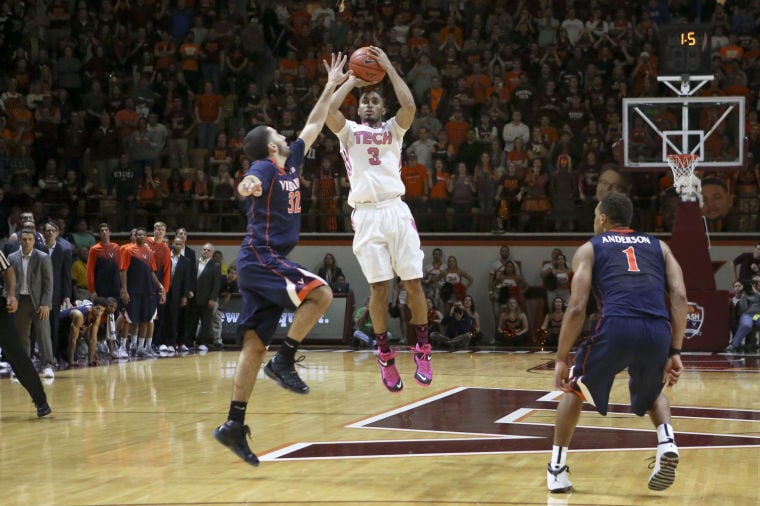 Former Virginia Tech guard Adam Smith (3) shoots in a game against Virginia last season at Cassell Coliseum. The court at Cassell will be named Virginia Tech Carilion Court under a$5 million, 10-year deal between Carilion and the university. 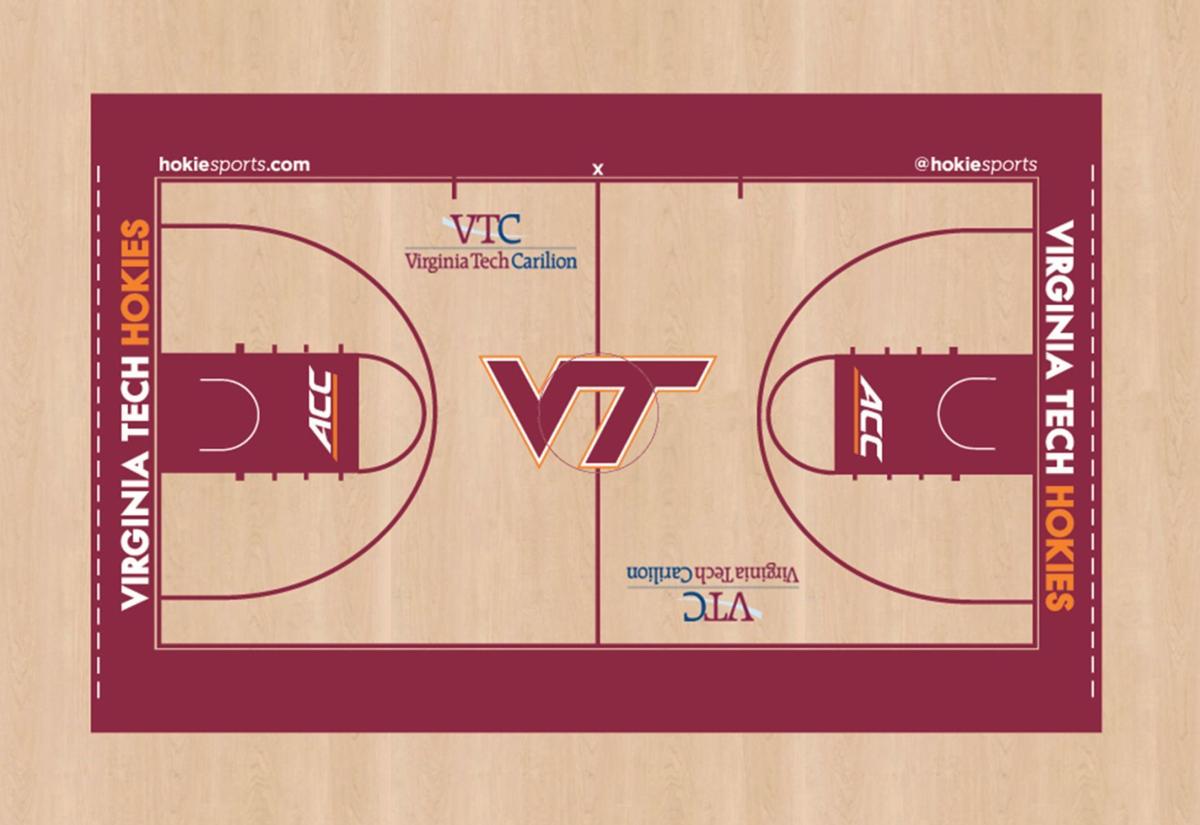 Carilion Clinic purchased the naming rights to the basketball court of Cassell Coliseum for $500,000 for the next 10 years. It will now be known as Virginia Tech Carilion Court.

The Cassell Coliseum court is getting a name — and Virginia Tech is getting $5 million.

Virginia Tech announced Wednesday that Carilion Clinic will give the athletic department $500,000 a year for the next 10 years for the naming rights to the Tech basketball arena’s court. The floor will be called Virginia Tech Carilion Court; the name of the facility will not change.

The plan is for “VTC Virginia Tech Carilion” to be on two spots on the court, which is not only used for men’s and women’s basketball but for wrestling and volleyball as well.

“We’ve been looking … for ways to use our precious marketing dollars that are more about sustainability and long-term investment in the future,” said Carilion Clinic President and CEO Nancy Agee. “We’ve found a way to … integrate Carilion and Virginia Tech more closely.

“VTC is a medical school that’s fairly young. … We do want to get the word out.”

Virginia Tech athletic director Whit Babcock said about half of the Carilion money will be used for endowed scholarships for basketball players who are interested in health care careers. The rest will go for improvements to Cassell Coliseum, including the basketball locker rooms there, and to the strength and conditioning area at the basketball practice facility.

The money also could be used for other Cassell Coliseum enhancements that have yet to be determined.

“What can we do from a fan comfort [standpoint] — is it seating, is it concourse areas, is it hospitality, is it widening the concourses?” Babcock said.

Agee said Carilion had a lot of input into how its money will be used and wanted to provide health-related scholarships.

Virginia Tech did not offer the naming rights to the court to any other corporation, said Babcock.

“The fact that our medical school is affiliated with Carilion, it’s just a good fit,” Babcock said.

“It’s more than a traditional sponsorship, meaning there’s a lot more we’re going to do together in the community and New River Valley wellness — maybe some partnerships with Buzz’s Bunch (basketball coach Buzz Williams’ camp for children with disabilities); some of our student-athletes speaking to youth; faculty-staff wellness.”

Carilion already had basketball season tickets as one of the athletic department’s corporate sponsors. The naming rights to the court came up in discussions between Carilion and the department on ways to go “beyond the traditional sponsorship,” said Babcock.

“We offered a couple things there, but when we got to Cassell, that seemed to be the right fit,” he said.

Babcock said he is not on a mission to sell naming rights to other facilities.

“We will be very selective in things like that,” he said. “If the right partner came along … we may look at it. But I can tell you we have no intention to change [the names of] Lane Stadium or Worsham Field.”

He said Carilion did not inquire about the naming rights to Lane Stadium or the football team’s new indoor practice facility.

The deal announced Wednesday is the latest step in Babcock’s quest to boost athletic department revenues.

Last spring, Tech announced it was going to take away the Cassell Coliseum courtside seats of media members so it could sell them to donors. Babcock said Wednesday that 12 of 14 courtside tables for men’s basketball have been sold so far — at a cost of $20,000 per table.

Virginia Tech is also hoping to sell more club seats at Lane Stadium than it has been. In an effort to attract more buyers for them, Tech has been renovating the indoor stadium clubs and recently revealed it will sell beer and wine in those indoor clubs.

“We already allow responsible use of alcohol in our [Lane luxury] suites,” Babcock said. “These indoor club areas, it’s less than 2 percent of the stadium. Everything is indoors, everything will be monitored. … It’s not in the stadium bowl; it’s certainly not a direction we want to go.

“We did not do that for the [alcohol] revenue. … People that sit in suites and premium seats and entertain and pay that type [of money] for a ticket, I just think it’s part of the overall experience.”

One reason Babcock has been seeking more revenue is because of a new NCAA rule that allows schools to increase athletes’ scholarships beyond tuition, books, and room and board, to cover the full cost of attendance, such as living expenses and trips home. It will cost Tech an extra $900,000 per year so it can provide this benefit to all of its scholarship athletes.

Money from the courtside tables and the sales of Lane club seats will help with the cost of attendance increase, said Babcock, but the Carilion money will not be used for that.

Brooklyn losses show Virginia Tech has 'work to do'

"We're not as good as we thought we were," Mike Young said.

Get ready for tomorrow's Commonwealth Cup, keys to the game, player to watch, prediction and more

Former Virginia Tech guard Adam Smith (3) shoots in a game against Virginia last season at Cassell Coliseum. The court at Cassell will be named Virginia Tech Carilion Court under a$5 million, 10-year deal between Carilion and the university.

Carilion Clinic purchased the naming rights to the basketball court of Cassell Coliseum for $500,000 for the next 10 years. It will now be known as Virginia Tech Carilion Court.