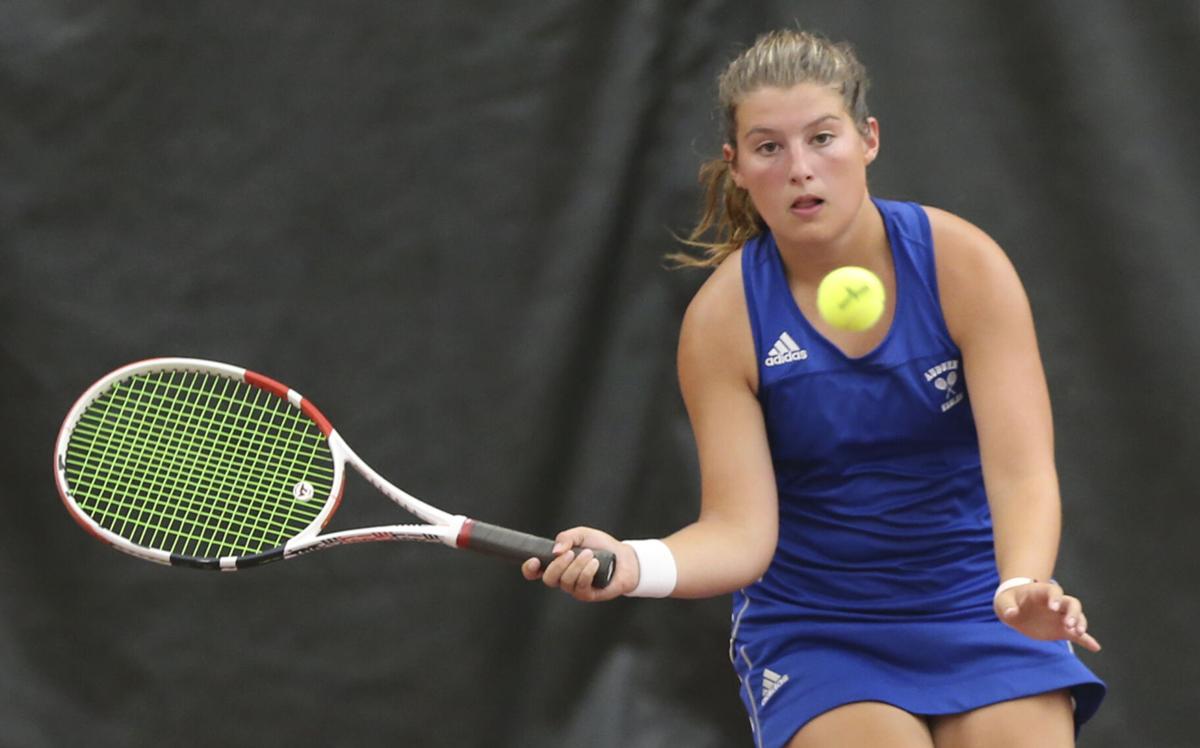 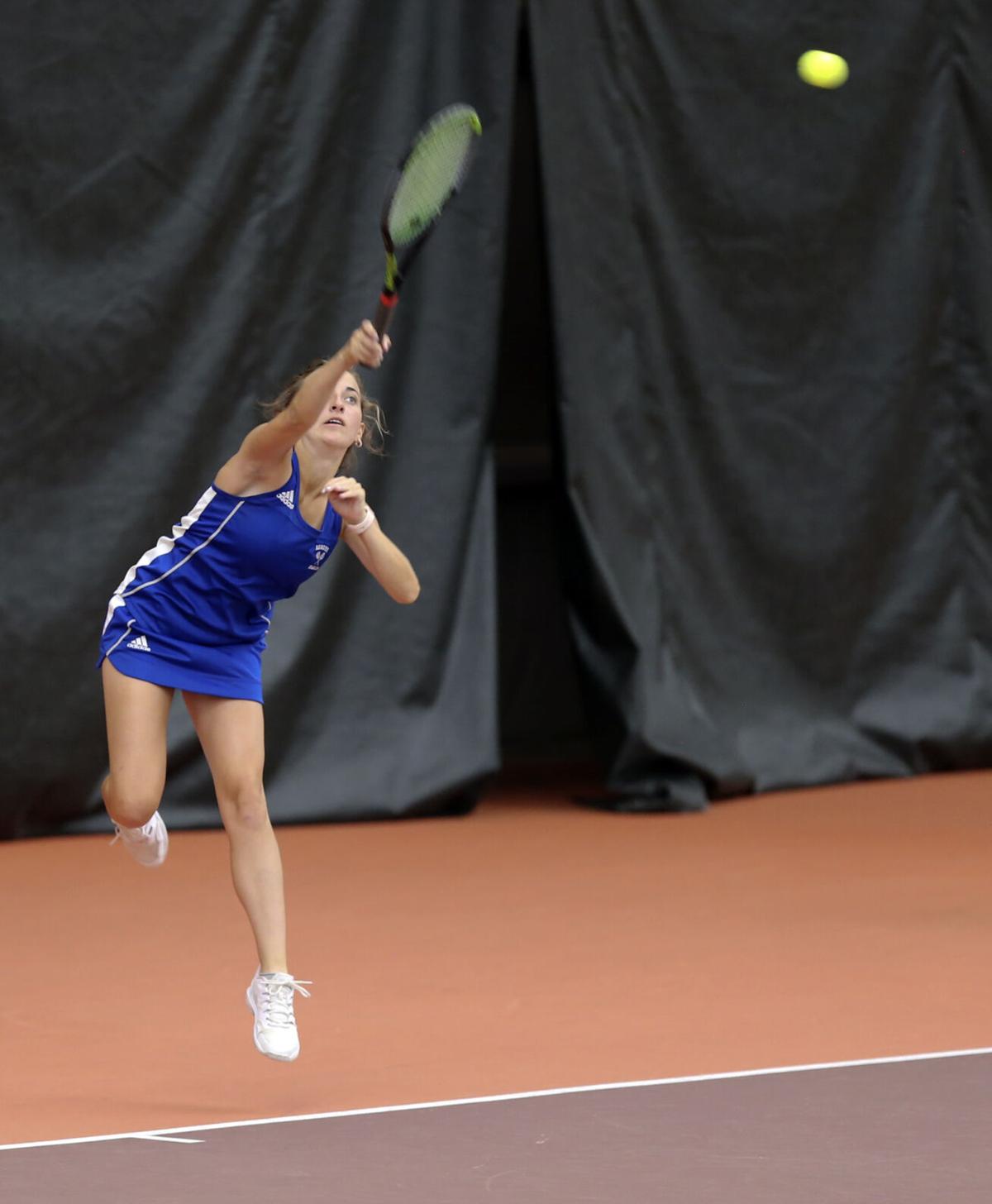 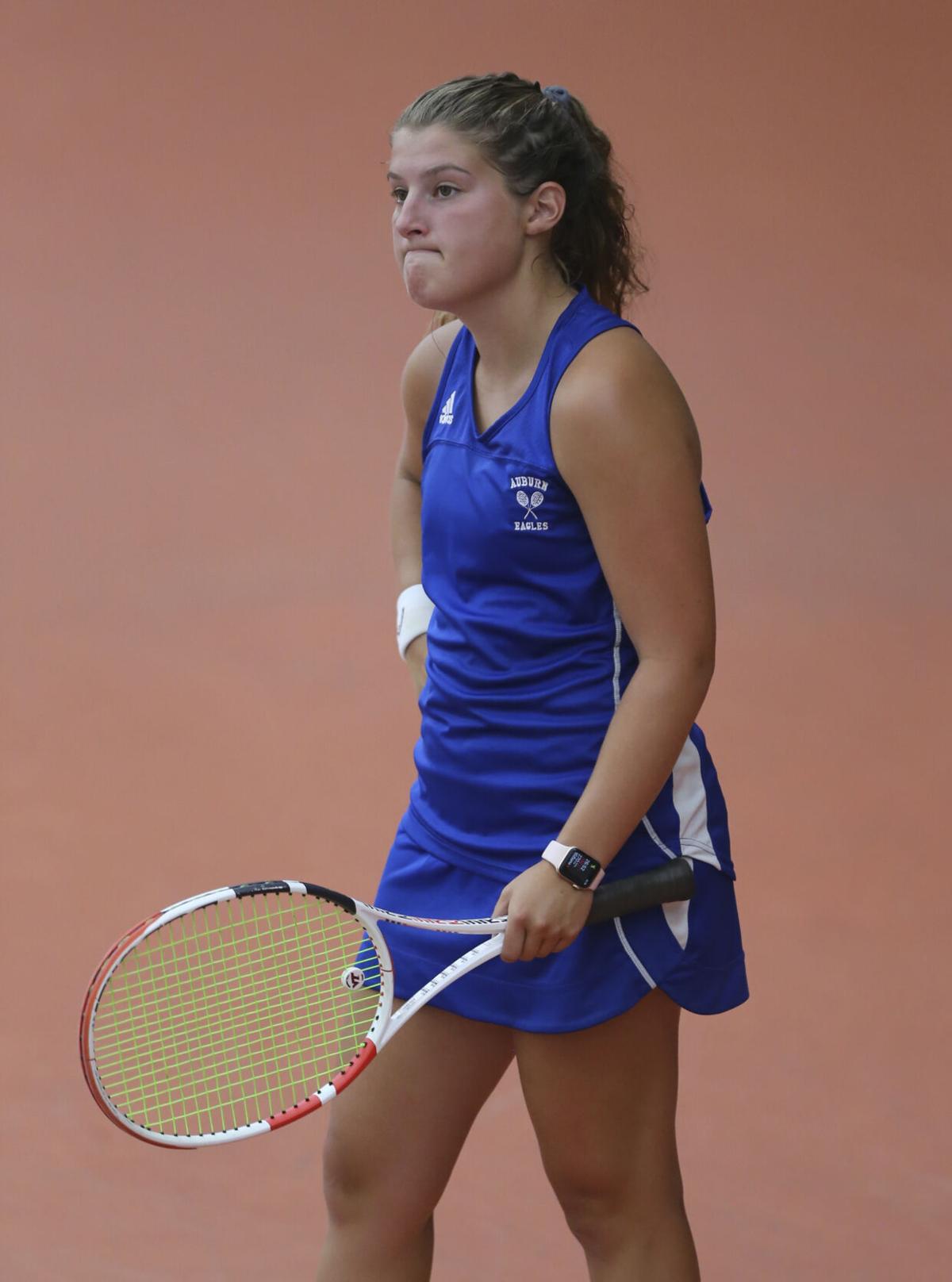 Auburn's Sara Nichols reacts during her match in the Class 1 girls tennis team championship at Virginia Tech on Thursday. 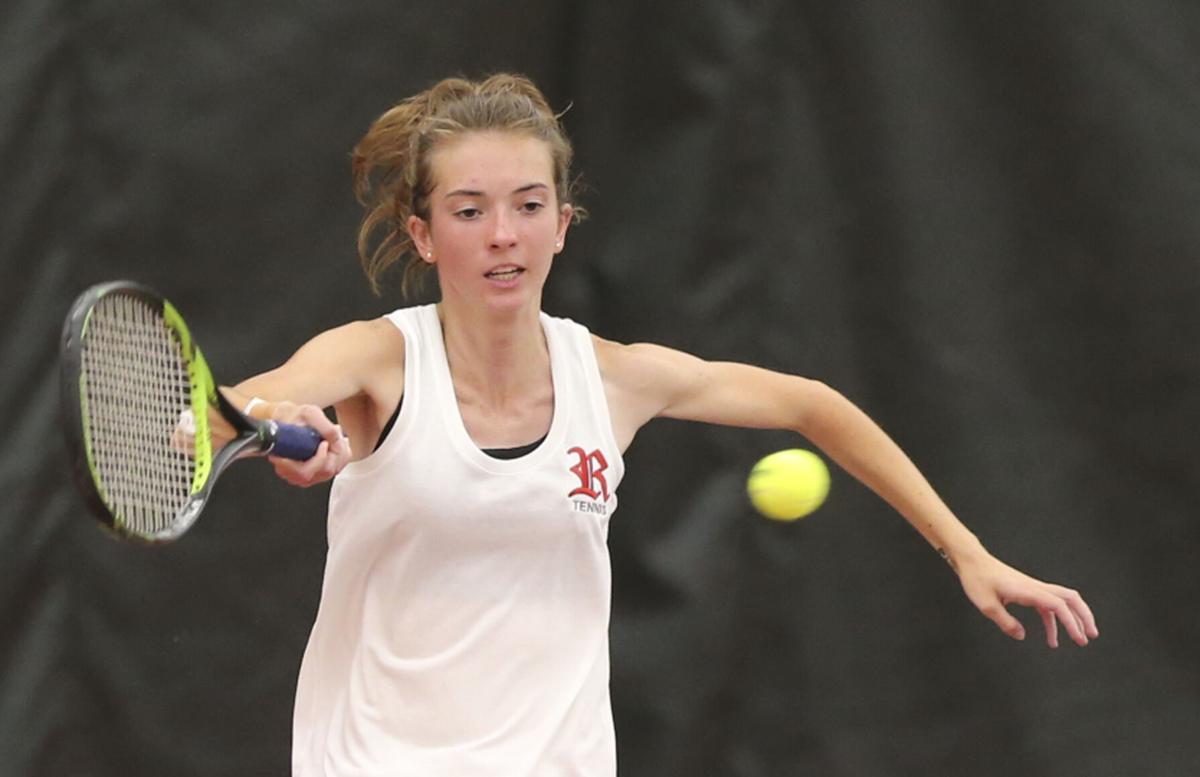 By Troy Sarver Special to The Roanoke Times

BLACKSBURG — There may have been a last-minute venue change, but the results of the Class 1 girls tennis team final were still the same as previous years.

Led by dominating performances from their top two seeds, Auburn claimed the state title with a 5-0 victory over Rappahannock on Thursday afternoon at Virginia Tech.

It was the Eagles' third straight state crown after previous wins in 2018 and 2019, both also coming against Rappahannock in the finals.

Thursday’s matches were originally scheduled to take place at Blacksburg High School, but early morning rains in Montgomery County forced the teams to move up the road indoors to Tech’s Burrows-Burleson Tennis Center.

The move, however, didn’t seem to bother Auburn’s Sara Nichols. The Eagles’ No. 1 seed set the tone for the day as she had little trouble in a 6-0, 6-0 win over the Raiders’ Layla Gaines. It was Nichols’ second straight shutout victory after taking her state semifinal match by a similar 6-0, 6-0 score on Monday.

Despite the lopsided score, Nichols said it was a challenge adjusting to playing inside.

“There is no air in here, so every time you hit it you have to be accurate, because you don’t have the wind that might help it,” Nichols said.

There isn’t a better time for Nichols to be playing such high-quality tennis. She will attempt to win the Class 1 state doubles title on Friday with partner Anna McGuire, and she’ll look to complete the trifecta with a win in the state singles tournament on Saturday.

“It’s a very big weekend," Nichols said. "I feel focused and I’ve got a lot of energy going into it."

McGuire comes into doubles competition with a lot of momentum as well after beating Kaylee Childs 6-0, 6-1 in the No. 2 singles match.

McGuire also said it was an adjustment to move indoors, but that the experience could prove to be helpful considering Friday’s doubles would take place at Virginia Tech as well.

“I’m really excited we got to play here and got some practice in here for tomorrow,” McGuire said. “The ball goes quicker inside and that helps me out because I use a lot of topspin.”

The Eagles lost out on a chance for a three-peat last season when the spring sports schedule was canceled due to the COVID-19 pandemic. The team also lost a number of players upon their return to action as Auburn went into the season with only eight available players.

“All the programs are down, but post-COVID I didn’t think we would have much of a team,” Auburn coach Conrad Nester said. “I didn’t have good numbers, but I had quality people and it only takes six.”

Nester added that his squad benefited from the fact that his top three players were also members of Auburn’s state-winning volleyball team earlier this spring.

“They know what it takes to win and that reflects on the other players,” Nester said.

NBA plans to start the new season in October

Vinton's William Byrd High is headed into the playoffs with seniors eager to make a mark.

Lanto Griffin back in Blacksburg, this time as host of AJGA tourney

The PGA Tour golfer and Blacksburg High grad is behind the Lanto Junior Championship.

Spring sports are in full swing, and the coaching carousel continues to spin.

Auburn moves on to the state final Thursday at Blacksburg High School where they’ll look to pick up their third straight team title in Class 1.

Auburn's Sara Nichols reacts during her match in the Class 1 girls tennis team championship at Virginia Tech on Thursday.