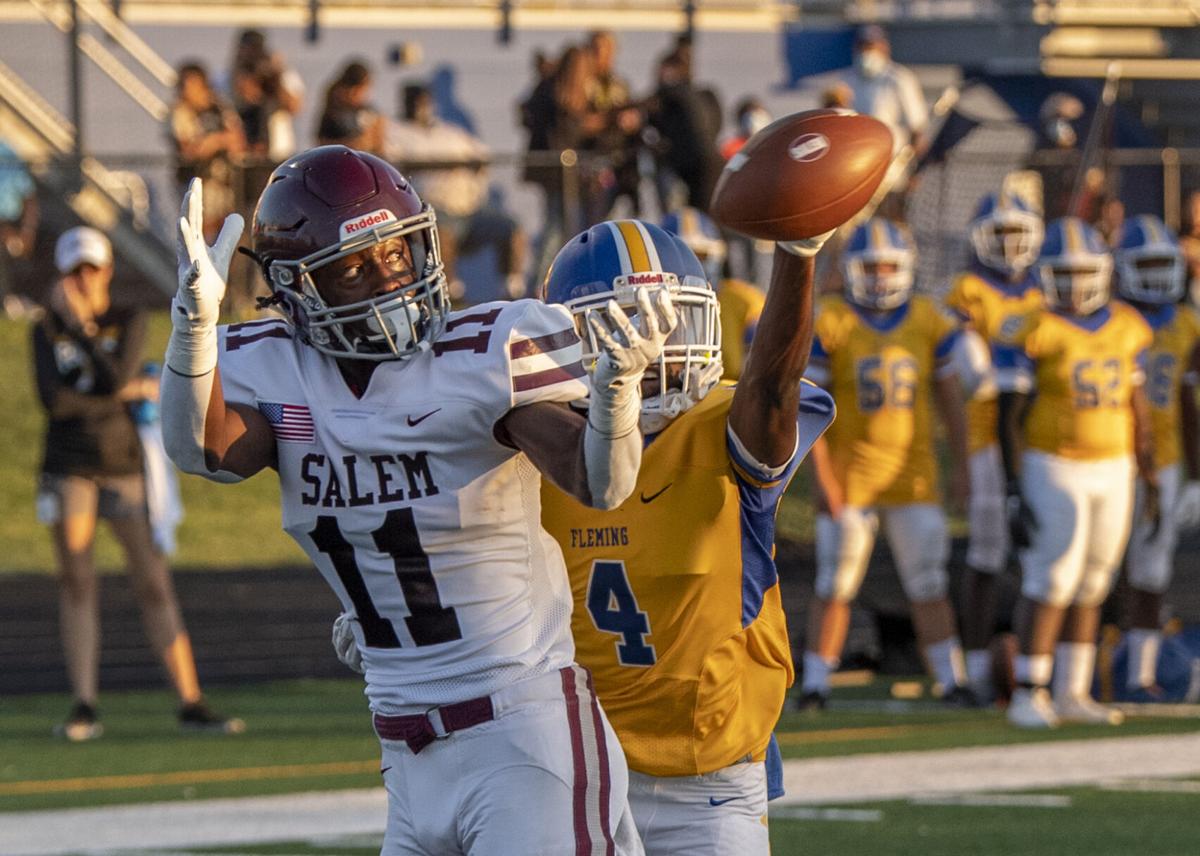 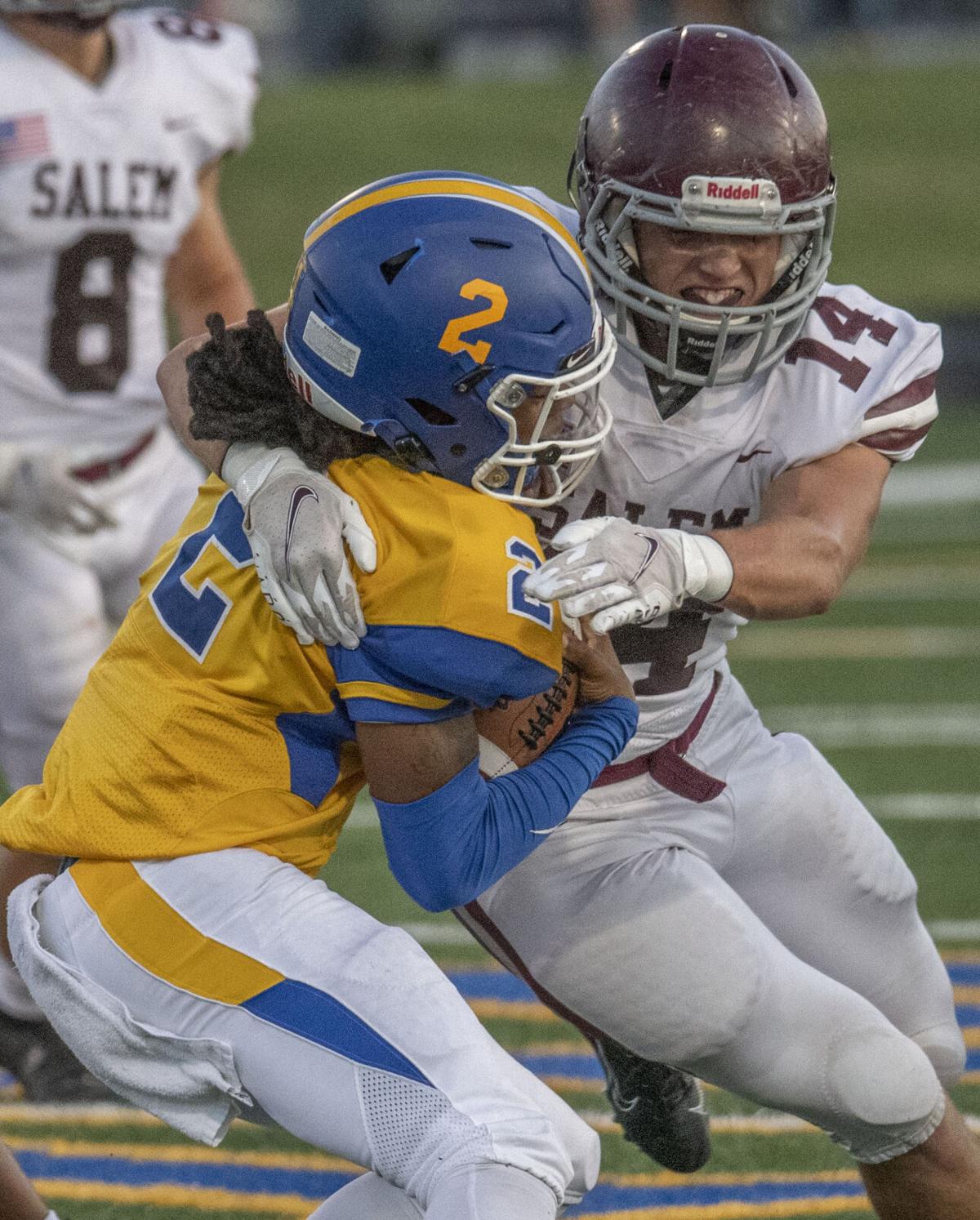 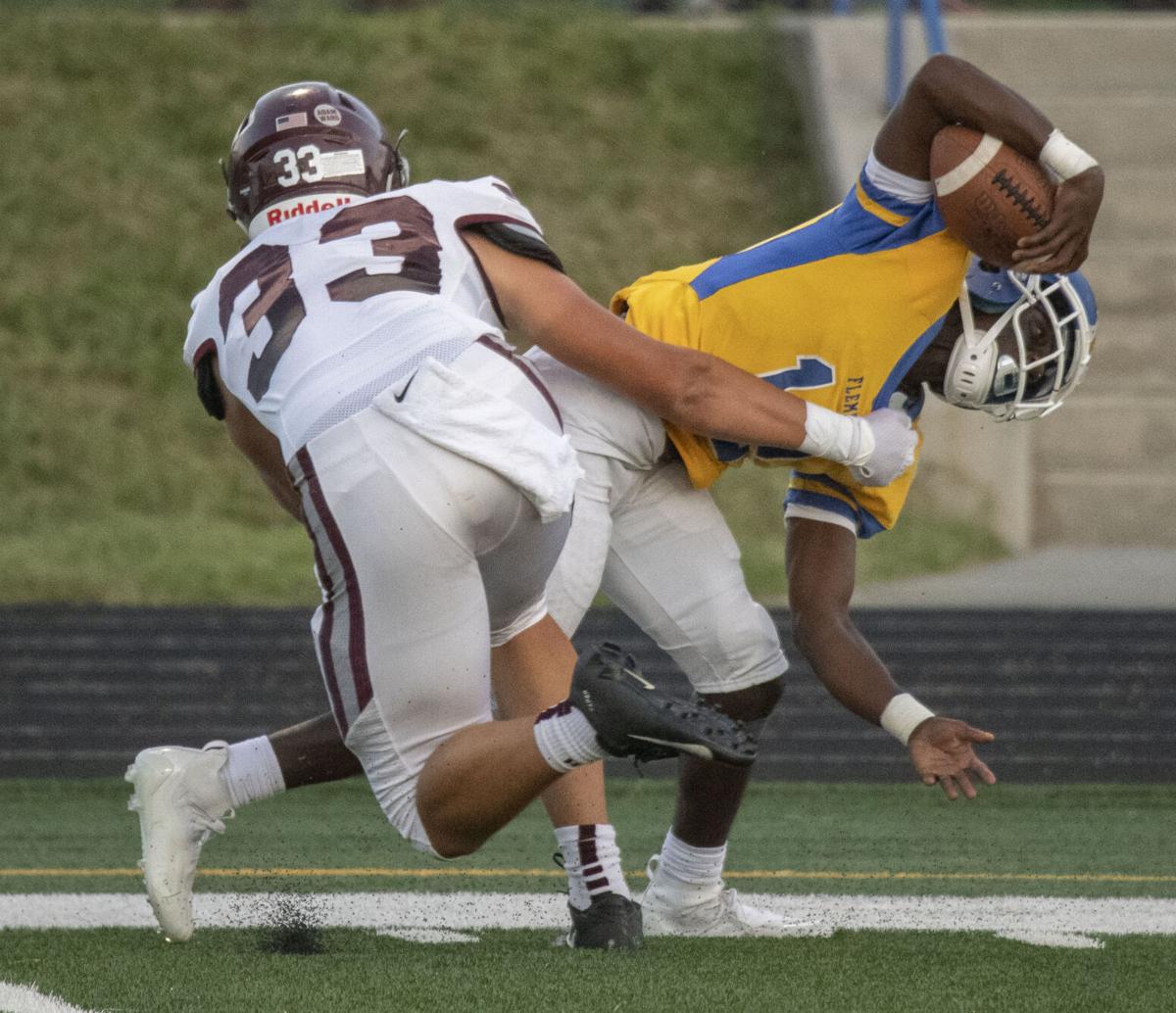 Salem’s football team had its Week 2 game against Franklin County postponed by COVID-19.

So what did the Spartans do last Friday?

You guessed it. They practiced.

It didn’t make Salem perfect Friday night, but the reigning VHSL Class 4 champions were plenty sharp enough to score a 46-20 nondistrict victory over William Fleming for their first win of the 2021 season.

This time all the power was in the Spartans’ defensive line, which held William Fleming to just 39 rushing yards on 21 carries, including negative yardage on the ground in the second half.

Fleming quarterback Dashawn Lewis had little time to throw thanks to Salem senior tackle Cameron Martindale and not much room to run outside courtesy of lightning-quick Spartans sophomore Peyton Lewis.

“I’m really proud of those guys,” Salem coach Don Holter said. “We were able to get some pressure and get him off his launch points. Then, Peyton Lewis did a fantastic job matching speed and we were able to get him on the ground a few times.

“Dashawn Lewis will make you pay when you don’t.”

Salem’s offense was efficient if not spectacular.

Salem led 3-0 before Wilson flipped a short pass to Chauncey Logan in the left flat, and the 6-foot-2 senior stutter-stepped a Fleming defender to the ground and outran the pursuit for a 46-yard TD and a 10-0 lead.

“That was instinct, being an athlete and making a play,” Logan said. “When I made the first man miss, I knew I had to get to the end zone.”

The Spartans also used a 51-yard catch and run by tight end Jake Massey to set up a 1-yard TD run by Leftwich for a 20-13 halftime lead.

On both big pass plays, the Colonels had a man in position but were unable to make the tackle.

“Hard tackles to make,” Fleming coach Jamar Lovelace said. “You’ve got to kind of take those matchups against Salem instead of taking people out of the box. They did a good job of executing.”

Lewis scored on a 7-yard run to tie the game at 13 in the second quarter, and when he found Devin Johnson alone for a 92-yard TD on a blown Salem coverage, Fleming trailed just 27-20 with 9:13 left in the third quarter.

“We stayed calm,” Logan said. “We knew that we had to make another play on offense and score again. We trusted each other.”

Peyton Lewis sacked Dashawn Lewis for a 10-yard loss, forcing a punt from the Colonels’ 10.

A delay of game penalty moved the ball back to the 5, and then disaster struck for Fleming.

A low snap produced a fumble and Salem’s Lewis recovered the ball in the end zone for a 39-20 lead with 24 seconds left in the third quarter.

Salem’s defense sealed the deal in the second half with two interceptions, dooming Fleming to an 0-3 start to the season.

“We showed a little bit of heart, but again, it’s self-inflicted mistakes on special teams and turnovers,” Lovelace said. “Once that snowball starts rolling, it gets a lot harder.”

Fleming’s Lewis finished with 213 yards passing, but aside from the 92-yard TD to Johnson, the Colonels had just 9 yards of total offense in the second half.

While Fleming has dropped its first three games, motivation will not be a problem this week. The Colonels, who won the Region 5D title last season, play at Patrick Henry on Sept. 18.

“Nothing’s changed with us. I think we’re going to go 7 and 0 and get where we want to go.”

Who has the edge in the NL Wildcard race?

What to expect with Justin Fields at the helm

What to expect with Justin Fields at the helm