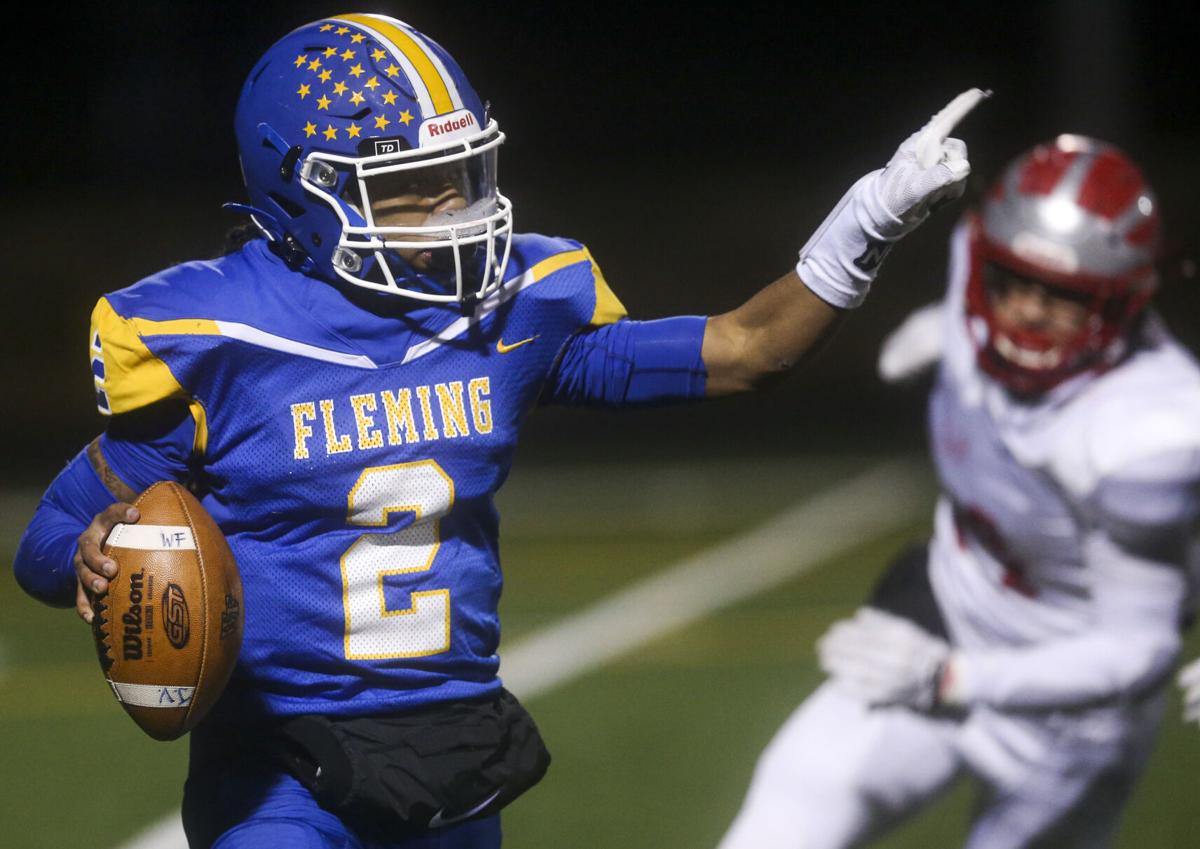 William Fleming quarterback Dashawn Lewis (left) will direct the Colonels on at home Friday in a first-round game against Harrisonburg in the Region 5D playoffs. 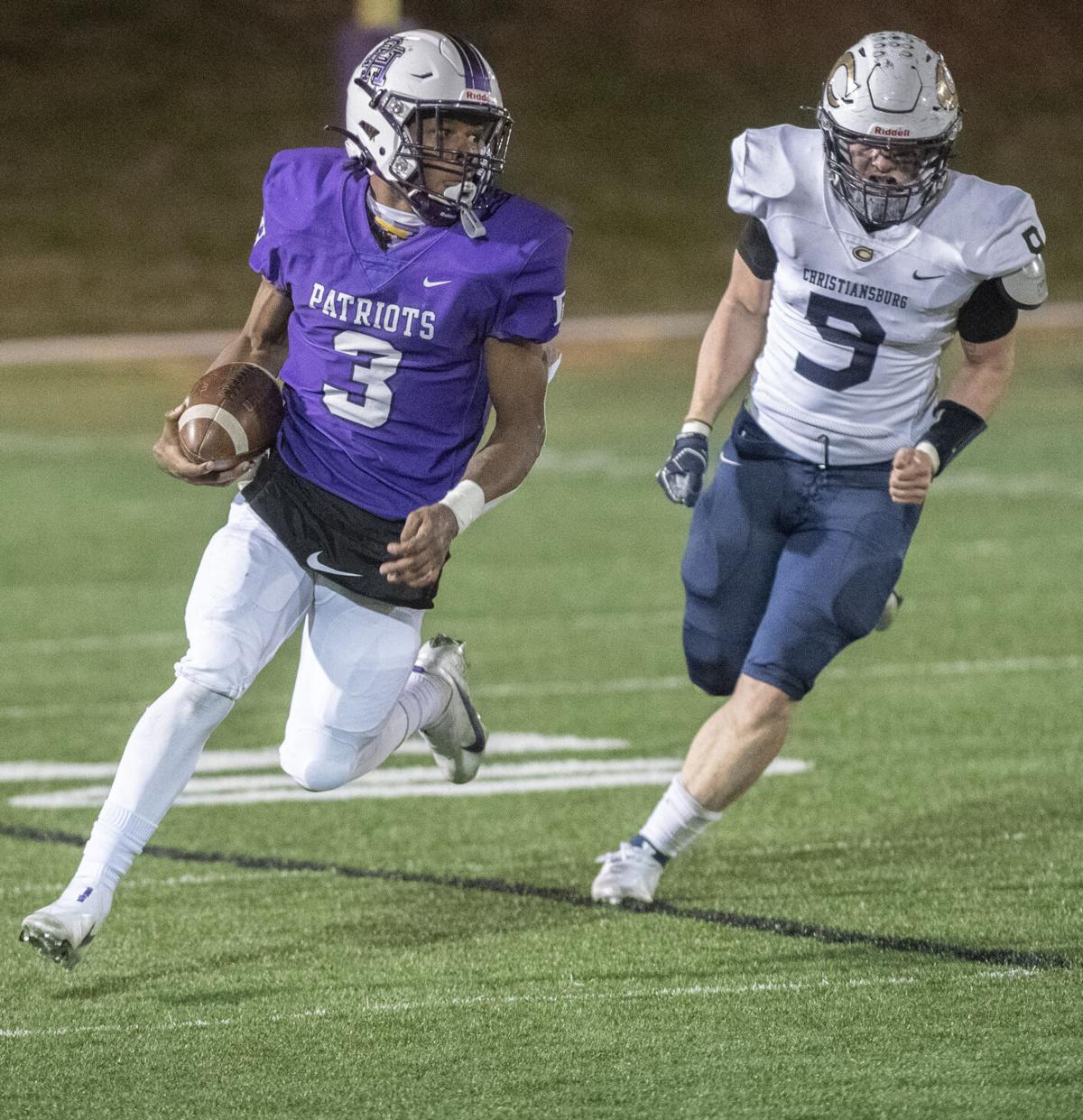 The football programs at William Fleming and Patrick Henry have accomplished a pair of firsts in the delayed 2020 high school football season.

Because of the COVID-19 pandemic, the two Roanoke city rivals did not play a regular-season game against each other for the first time since PH opened in 1962.

But wait, the Colonels and Patriots could still collide.

Fleming and PH need victories Friday night in the first round of the VHSL playoffs, which officially were released Monday.

That would set up the Region 5D final next week at top-seeded Patrick Henry.

Not only have Fleming and PH never met in the playoffs, this is the first time that both programs have a postseason game at home in the same year.

Second-seeded Fleming is host to No. 3 Harrisonburg at 7 p.m. Friday, while PH faces dangerous No. 4 seed Mountain View at 6 p.m.

Fleming (4-2) is playing Harrisonburg (3-2) in the first round for the second straight season.

The Colonels defeated the Blue Streaks 52-10 in the 2019 season opener and won 20-17 in Harrisonburg in the playoff game before losing 35-0 at Mountain View in the region semifinal.

Botetourt’s game against Christiansburg is the only Timesland game this weekend on Saturday.

Top-seeded Rockbridge County has drawn three-time defending Region 3C Heritage (5-1), which needed a loss by Turner Ashby last week to qualify as the No. 4 seed in a competitive region.

Christiansburg earned the No. 4 spot in Region 4D after Bassett was denied the berth partly thanks to a VHSL ruling.

Bassett defeated both Halifax County and Patrick County this season. Those two Piedmont District teams were scheduled to play each other and no matter the result, the Bengals would have picked up two “rider” points on the VHSL Rating Scale, which determines playoff qualification.

However, Halifax canceled the game because of COVID-19, which means the game is considered a no-contest, which also meant Bassett did not earn rider points.

It was the second of three games Halifax did not play. The other two were considered forfeits because of a lack of available players not caused by COVID.

The Bengals were denied an appeal that they should have been awarded rider points and finished with a 19.00 average to Christiansburg’s 19.17.

When Radford school superintendent Rob Graham said two weeks ago that the Bobcats’ athletic programs would be shut down until April 5, it appeared the football team’s season might be over.

Instead, testing and COVID contact tracing produced results that allowed Radford to find an opponent for the final weekend after originally canceling a game against Carroll County.

Radford (4-1) picked up Richlands and scored a 42-0 victory Saturday.

Had Radford not found an opponent, the Bobcats would have finished behind Fort Chiswell for the No. 4 spot in Region 2C.

The Bobcats play at No. 1 Appomattox County, which has won four of the past five regional titles. The lone exception was Radford’s 28-25 win over the Raiders in 2018.

Getting to the finish line

Nearly half of the 96 playoff teams played fewer than the maximum six allowed by the VHSL.

The Region A/Region B winner in each classification will be the home school for each championship game.

Usual neutral sites such as Salem Stadium, Liberty University and Hampton University will not be used this year.

Football and volleyball playoff pairings. B10

William Fleming quarterback Dashawn Lewis (left) will direct the Colonels on at home Friday in a first-round game against Harrisonburg in the Region 5D playoffs.