J.J. Redick, shown playing for New Orleans in the 2019-20 season, has retired from the NBA after lasting in the NBA for 15 seasons. 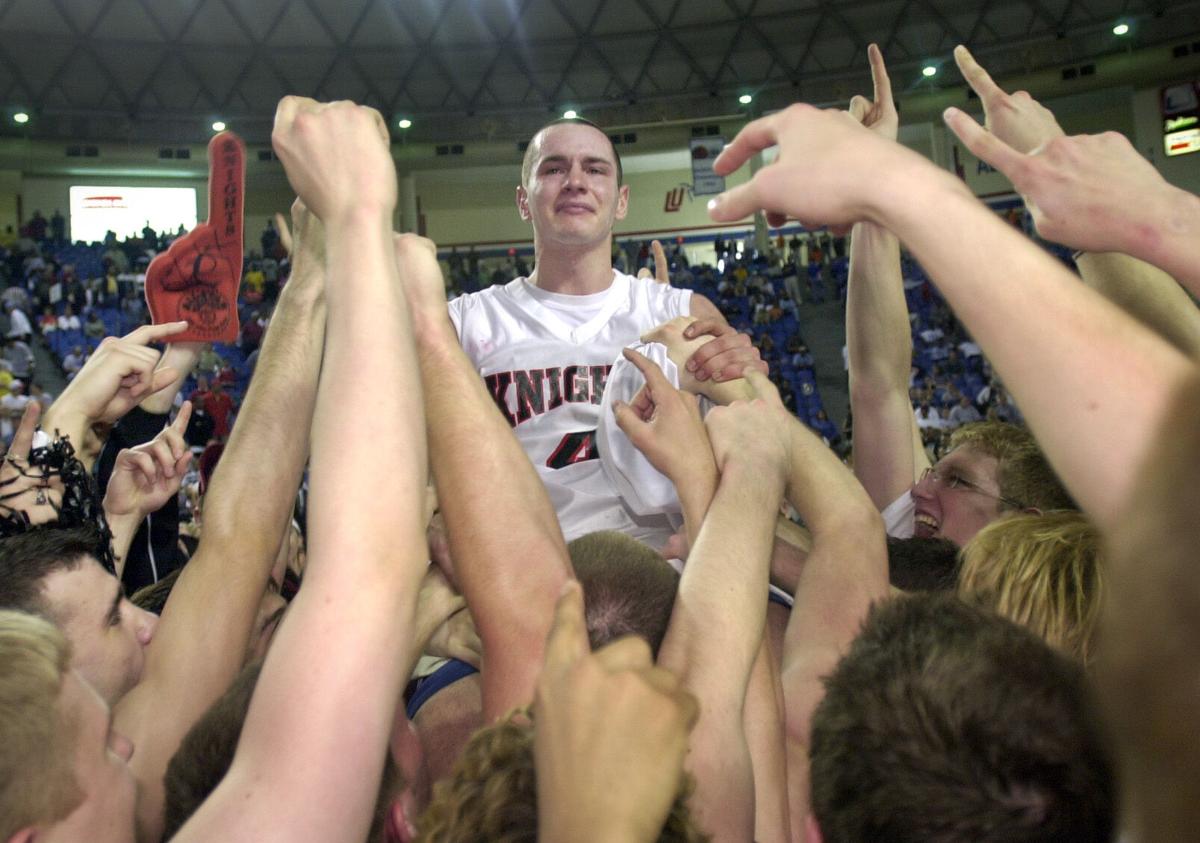 Duke's J.J. Redick (4) is grabbed by teammate Sean Dockery (15) after the No. 1 Blue Devils defeated host North Carolina in overtime on Feb. 5, 2004. Redick was a two-time national player of the year at Duke.

He was a high school All-American at Cave Spring.

He was a two-time national college player of the year at Duke.

He was a first-round draft pick.

He has played in the NBA for 15 years.

But J.J. Redick, one of the greatest athletes in Timesland history, is now ready to walk off the basketball court.

Redick, 37, announced his retirement from the NBA on Tuesday in a six-minute video he posted on Twitter.

“It’s a little bit of a bittersweet day.”

Redick reflected on his Roanoke roots in the video.

“It was 30 years ago this month that my family moved to Roanoke, Virginia, on Lost Mountain Road,” he said in the video. “My dad immediately put up a hoop for me and my older sisters to play on. It was on that court that my basketball dreams began to take shape. It was an uneven patch of dirt, gravel and grass, and as a 7-year-old boy I dreamed of playing at Duke. As I got older, I dreamed of playing the NBA.

“The last 30 years of basketball have been beyond my wildest dreams. I never could have imagined that I would have played basketball for this long. After years of youth leagues, AAU, high school basketball, four years at Duke and 15 years in the NBA, I’m retiring from the game that I love so much.”

Redick, who was chosen by Orlando with the 11th overall pick in the 2006 NBA Draft, played for six teams in his NBA career. He ranks 15th in NBA history with 1,950 career 3-pointers.

Redick has been a free agent this summer.

“I wanted to give myself some time to reflect and figure out if I wanted to keep playing. It’s one of the reasons that I told teams that called during free agency that I would decide later on,” he said in the video. “I didn’t want to commit to anything until I was sure. Well, I have some clarity now.”

But he was plagued by a heel injury last season. He was traded from also-ran New Orleans to playoff hopeful Dallas in March. He averaged just 7.4 points, 1.5 3-pointers and 16.4 minutes in 44 games with New Orleans and Dallas combined last season, when he shot only 37.1% from 3-point range.

“Going into last season, I wanted it to be my last year but wasn’t sure how the season would play out,” he said in the video. “It was difficult for a number of reasons — being injured, being away from my family [in Brooklyn, New York], COVID protocols and really, truly not playing up to my standards.

“I would like to describe last season as a seven-month exercise in coming face to face with my own athletic mortality. And it was scary and confusing.”

Redick thanked coaches from his Roanoke years during Tuesday’s video, including his former AAU coaches.

“I want to thank my first AAU coaches — Delmar Irving, Keith Haynes and Dick Wall. You guys instilled a sense of toughness, competitiveness and discipline in me,” he said.

He also thanked his former Cave Spring High School coaches in the video.

“I want to thank … Billy Hicks and Chris Morris at Cave Spring for pushing me every day and keeping me level-headed,” Redick said.

“[Winning that title] was something that I had always dreamed of doing since the time I moved to Roanoke,” Redick told The Roanoke Times in a 2009 interview. “I remember shooting in the back yard, dreaming of playing in a state championship.”

Redick remains the most highly decorated player in Roanoke prep basketball history. He became the leading scorer in Group AAA history with 2,214 points; broke state tournament scoring marks; and was named the most valuable player of the McDonald’s All-American Game at Madison Square Garden.

Redick then scored a school-record 2,769 points and made a school-record 457 3-pointers in his Duke career. He became the ACC’s career scoring leader and the NCAA’s career 3-point king, although he has since been eclipsed on both lists.

He thanked Duke coach Mike Krzyzewski in the video, as well as those who helped him during his NBA career. He also thanked his parents, siblings and wife.

“I started dating my wife, Chelsea, in September of 2008. … I was fighting for my place in the NBA,” he said. “I was unsure if I even had a future playing in the highest level of basketball. But over the last 13 years, she’s been my best friend.

He made the playoffs in each of his first 13 pro seasons, helping Orlando make the NBA Finals in 2009.

He averaged just 4.1 points in his second NBA season but worked hard to become an NBA standout.

Redick averaged 10.1 points in his fifth NBA season, beginning a string of 10 straight seasons in which he averaged double figures in points.

He was traded from also-ran Orlando to playoff hopeful Milwaukee in February 2013, then signed as a free agent with the Los Angeles Clippers in the summer of 2013.

In a 2016 interview with The Roanoke Times, Redick credited his improved shooting to the extra work he devoted to shooting.

His work ethic had been developed in Roanoke.

“Being the middle child of five, we all pushed ourselves growing up,” Redick told The Roanoke Times in 2016. “My dad, he kind of set the tone … of kind of putting your … proverbial hard hat on and going to work and doing your job. I take my job and my craft pretty seriously.”

Redick also announced his retirement Tuesday on his podcast, “The Old Man & the Three.”

Photos: From J.J. Redick's long basketball career in the Roanoke Valley and well beyond

Lord Botetourt runs over William Fleming thanks to QB play

“It feels good to be getting back to playing that kind of football,” Lord Botetourt coach Jamie Harless said of 42-7 victory.

Zebras have been on the loose in Maryland for the last month or so, with an occasional sighting in a neighborhood or on a hillside.

Christiansburg’s latest road trip to the Roanoke Valley for a football game was much better than the last time.

BUCHANAN — James River High School has one of the more picturesque settings for a high school football game anywhere.

After losing their first game to Brookville, the Patriots have reeled off six wins in a row.

In unusual October heat, a second half push brings victory for North Cross in afternoon game

They may not have been as efficient as they had been a week earlier, but the North Cross offense got the job done when they needed to on Frida…

Franklin County gets out to a fast start, cruises for 41-23 win over Byrd

Franklin County built a 41-6 lead and rolled to its third win in four games.

J.J. Redick, shown playing for New Orleans in the 2019-20 season, has retired from the NBA after lasting in the NBA for 15 seasons.

Duke's J.J. Redick (4) is grabbed by teammate Sean Dockery (15) after the No. 1 Blue Devils defeated host North Carolina in overtime on Feb. 5, 2004. Redick was a two-time national player of the year at Duke.