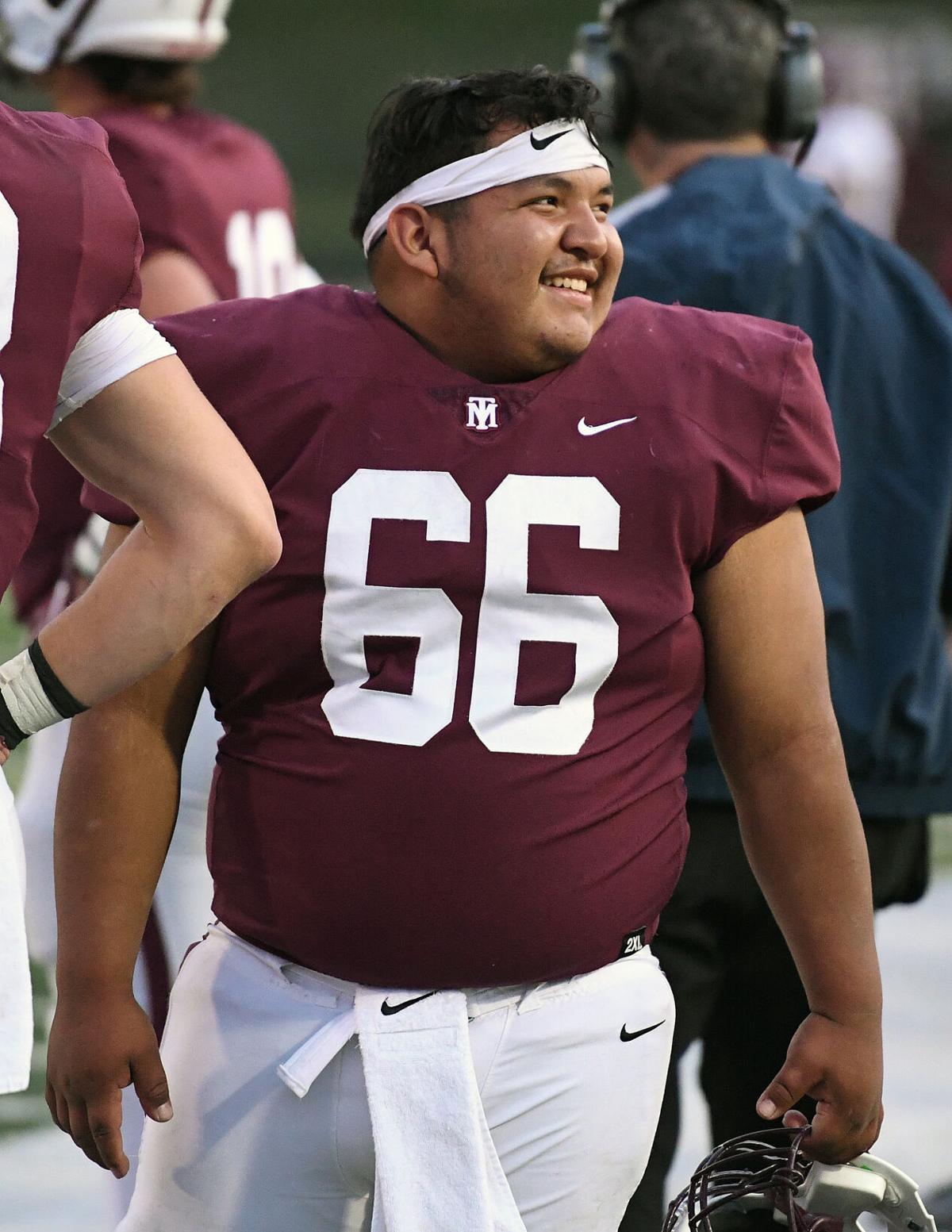 Galax senior Brender Rojas has been a key part of the Maroon Tide’s quest for a VHSL Class 1 state football title. 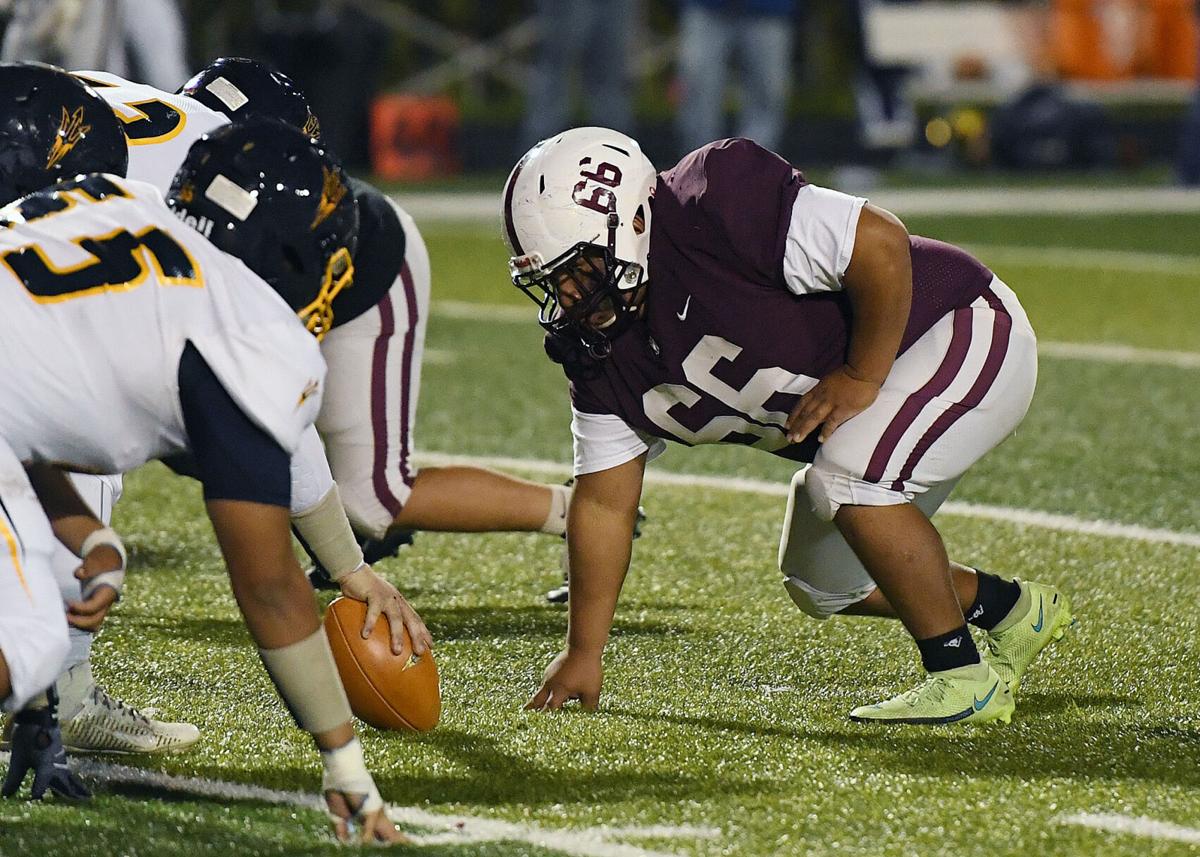 Galax’s Brender Rojas competes for the Maroon Tide on the football field and the wrestling mat, where he’s a two-time reigning Class 1 champion in the heavyweight division.

No challenge seems too big for Brender Rojas.

The Galax senior has helped the Maroon Tide football team reach the VHSL Class 1 state final each of the past two seasons.

On an individual level, Rojas is the two-time reigning Class 1 wrestling champion in the heavyweight division.

The Galax defensive lineman is a hard man to pin down, on the football field and the wrestling mat.

“He’s a lot quicker and more athletic than people think,” Galax coach Shane Allen said. “When they see him, they don’t think he’s very athletic. He shows it on the wrestling mat too, being able to use his strength and quickness to explode off the bottom.”

Saturday, Rojas and his Galax football teammates welcome to town a Parry McCluer team powered by a large offensive line and 6-foot-2, 225-pound running back John Snider for the Region 1C final.

“It’s going to be a four-quarter war,” Allen said. “We’ve got to be willing to make the same hits in the fourth quarter as we are the first quarter. When you’ve got to take on somebody that size for four quarters, adversity is going to reveal your character.”

Galax has ways of learning who really wants to play football for the Maroon Tide.

During the season, players report for 30 minutes of film study at 5:45.

Next comes work in the weight room, followed by a shower.

Then it’s time for school, followed by another half hour of film study.

Finally, the players hit the practice field at 4 p.m.

Friday, on the eve of the region final, Allen slacked off. He let the team sleep in and report at 6 a.m.

“We do it five days a week,” Allen said.

Rojas did not like football when he first tried the sport in the eighth grade.

“I didn’t know what I was doing,” he said. “I was just thinking to myself, ‘I guess I’ll just hit that kid right there.’”

He has learned to use his size to his advantage.

“He’s so strong, and it’s hard to get underneath his pads,” Allen said. “Some people who are a little on the shorter side, they tend to stand up too and it takes away their advantage. Brender does a heck of a job staying low.

“A lot of people misjudge him because of his looks instead of whether he can play.”

Rojas said there were plenty of skeptics questioning his ability on the wrestling mat until he proved otherwise.

Two bouts later, Rojas finished off his first VHSL championship with an epic celebration on the mat.

Galax has a number of athletes doing double duty in football and wrestling.

“Wrestling is such a physical, exhausting sport,” Allen said. “It teaches you that you can go a lot harder than you think you can. You’re going nonstop for two minutes, but you’re using every muscle in your body.

“It teaches you leverage and body control, when people try to push you one way and you come back the other direction.”

Galax football has gone in one direction — up — since Dixon took over the program in 2010.

The Maroon Tide has won 110 games in the last 11 seasons, including a 9-1 mark this past spring in Allen’s first year after Dixon left to become the head coach at Pulaski County.

Parry McCluer will have an edge in size Saturday, but Rojas has been there, done that.

“They’re going to be physical and come at you,” Allen said. “You know what’s coming, but can you stop it?”

Galax senior Brender Rojas has been a key part of the Maroon Tide’s quest for a VHSL Class 1 state football title.

Galax’s Brender Rojas competes for the Maroon Tide on the football field and the wrestling mat, where he’s a two-time reigning Class 1 champion in the heavyweight division.