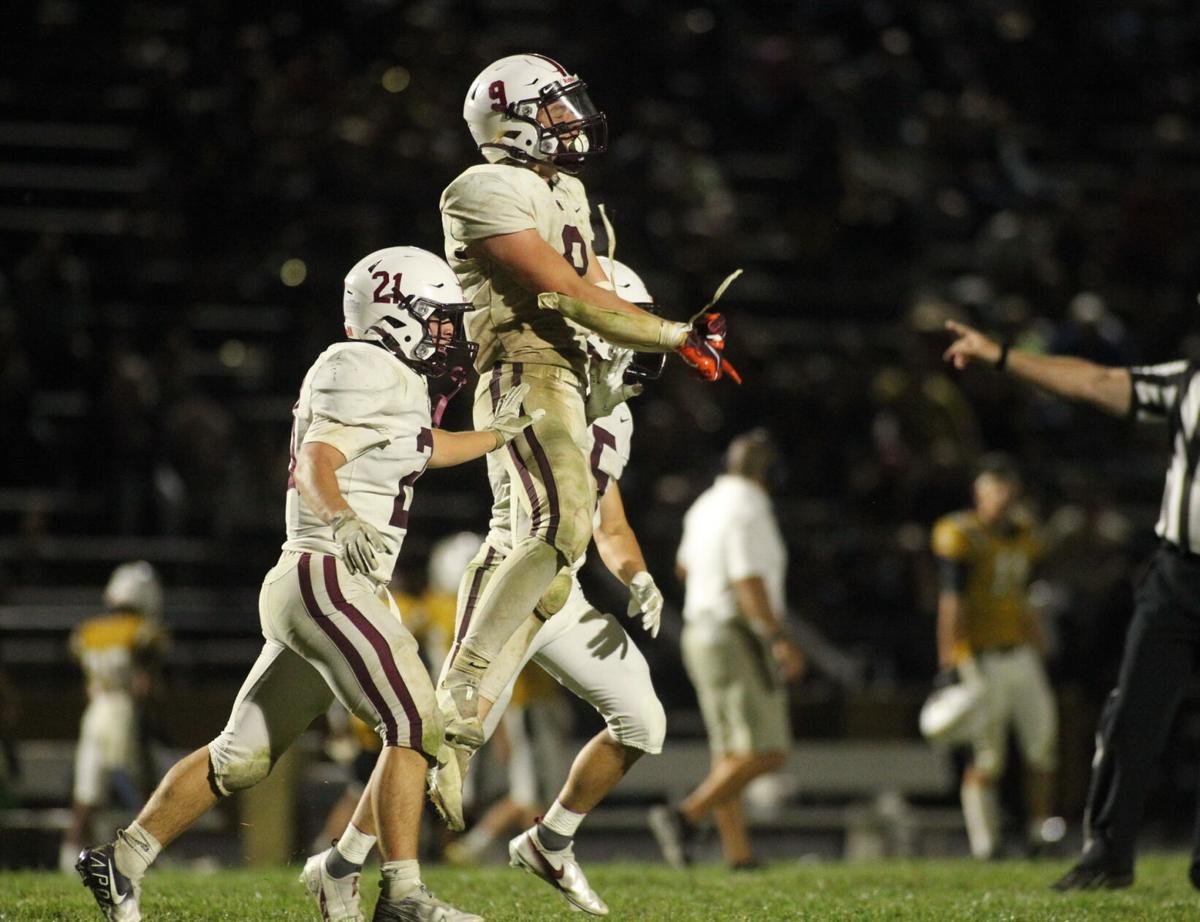 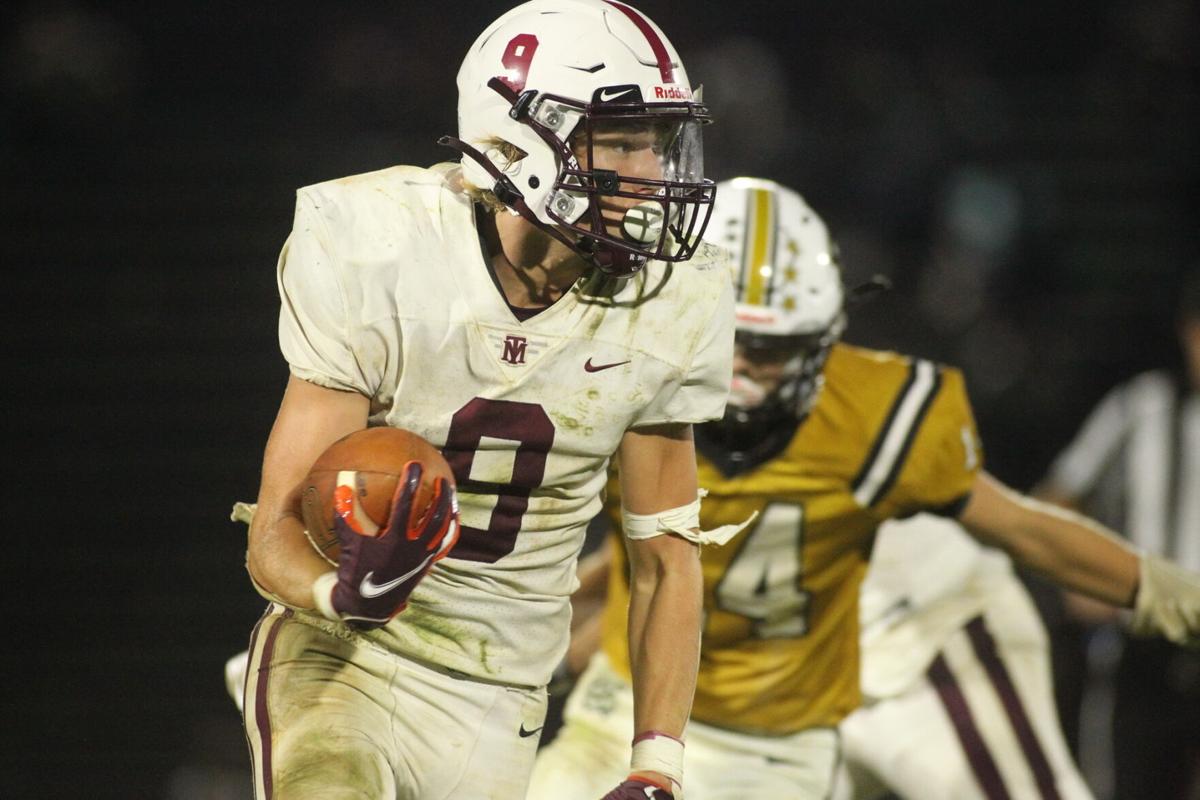 Galax's Ian Ashworth returns a punt against Radford during an overtime win. 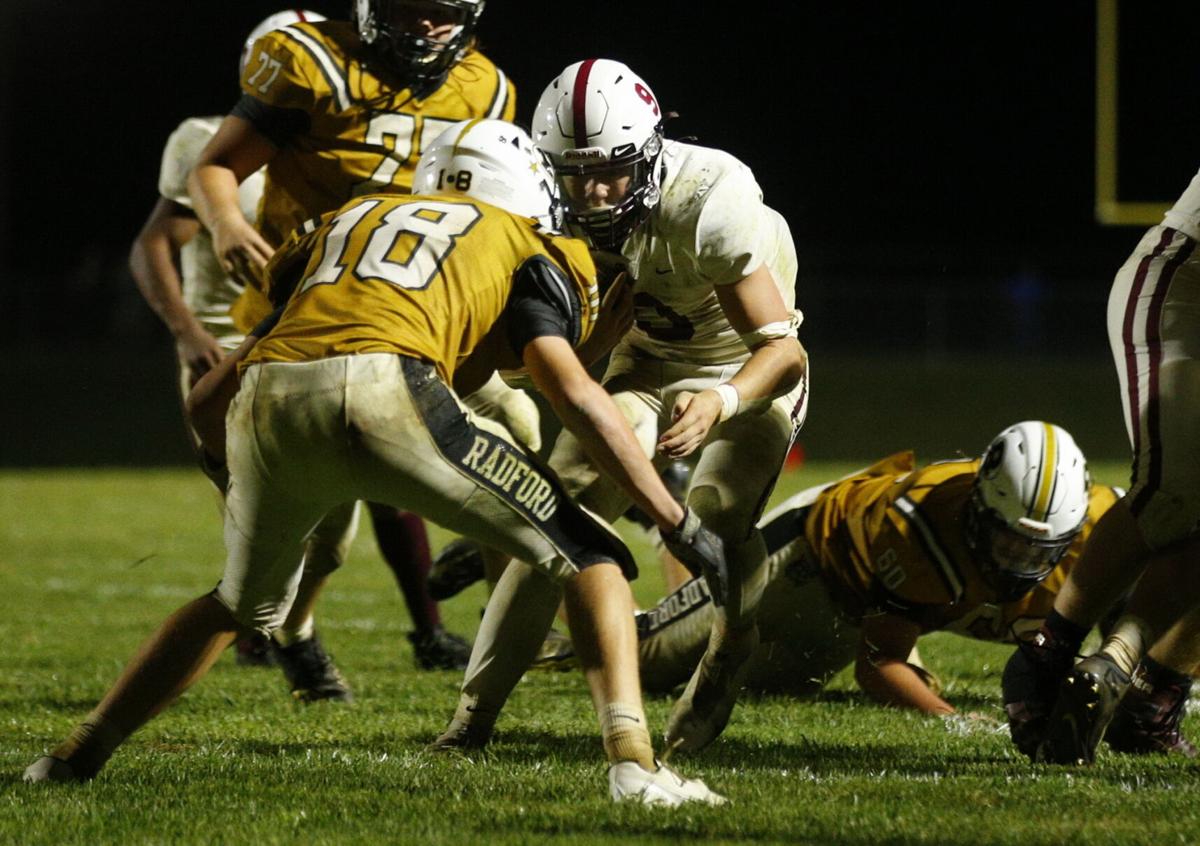 Galax's Ian Ashworth carries the ball down close to the goal line as Radford's Max Kanipe defends during the Maroon Tide's first overtime possession. Ashworth would score on the next play for a 34-27 lead. 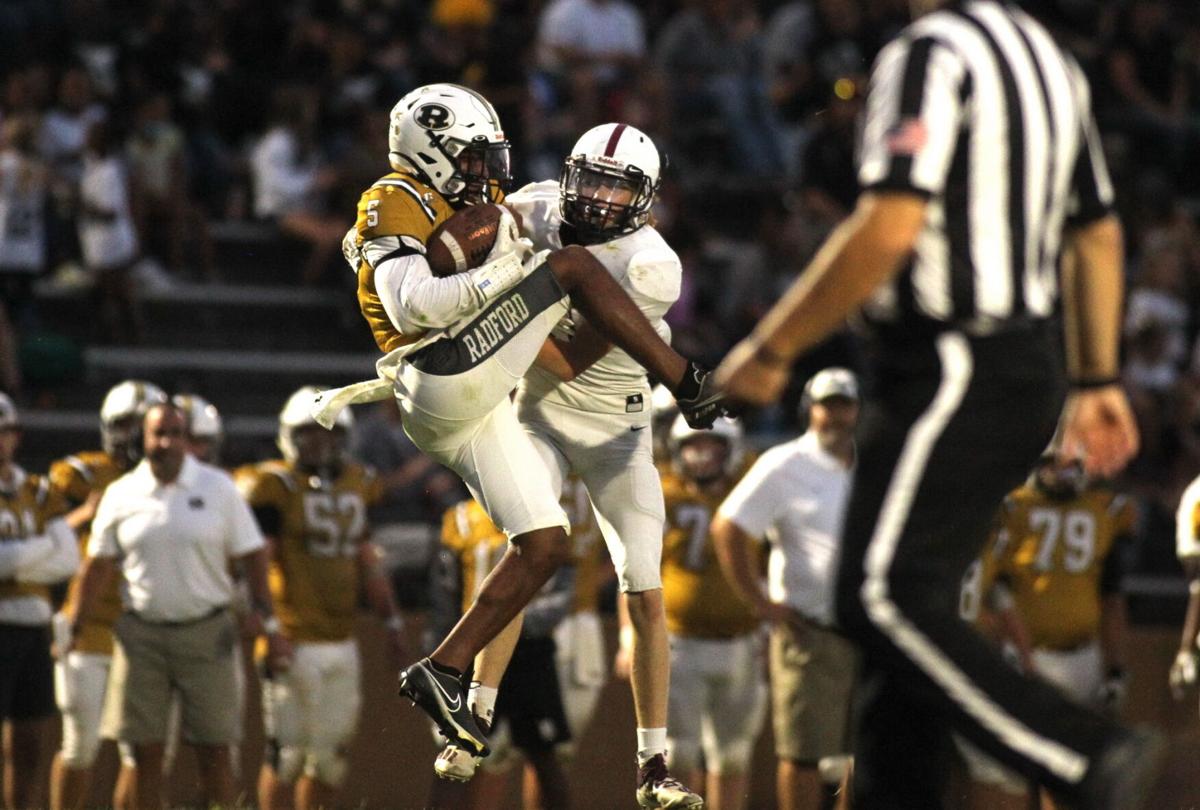 RADFORD — When the game went into overtime on Friday night, Galax’s Ian Ashworth decided to take matters into his own hands.

The Maroon Tide senior scored on a quarterback sneak on the first possession of overtime and sealed the victory moments later with an interception on Radford’s ensuing drive as Galax won 34-27 in a thriller at Radford.

Before his heroics in the extra period, Ashworth had a chance to lead Galax to a victory late in regulation. With under a minute to play and the game tied at 27, the Maroon Tide were driving in Radford territory when Ashworth was stripped of the ball on a quarterback run at the Bobcats’ 9. The ball was recovered by the Radford defense, sending the game into overtime.

The late game turnover, however, just provided extra motivation for the Galax signal-caller.

On the third play of Galax’s overtime possession, Ashworth got behind his offensive line and snuck it in the end zone from 2 yards out to make it 34-27.

When the Bobcats got the ball, they were immediately set back by a 10-yard holding penalty. Then on second down from the 16-yard line, Radford quarterback Marcell Baylor tried to hit receiver T.J. Aursby in the end zone, but Ashworth cut in front of Baylor’s intended target to pick off the ball and set off a Galax celebration.

“I saw the receiver cut across the middle of the field and I knew nobody had him, so I started chasing him,” Ashworth said. “Then I saw the ball out of the quarterback’s hands, and I was really just trying to bat the ball down, but I ended up getting across the receiver and just caught it and got down.”

Things did not look too positive for Galax (3-1) going into halftime as the Maroon Tide needed a 28-yard field goal from place-kicker Alberto Vera in the last minute of the half to cut Radford’s lead to 20-10 at the break.

“At halftime I told them, ‘No matter if we don’t score on that first drive, no matter what happens, we’re going to grind it out for four quarters,’ and that’s what our kids did,” Galax coach Shane Allen said. “Every single kid out here stepped up and fought.”

Galax didn’t score on its first drive of the second half, but the Maroon Tide finally broke through in the latter stages of the third quarter when running back Javonte Reeves got loose on a 29-yard touchdown run with 12 seconds left in the period to cut the Bobcats’ lead to 20-17.

On the ensuing kickoff, Baylor fumbled on the return inside the Radford 20, and Galax recovered the loose ball at the 14-yard line.

Three plays after the fumble, Reeves struck again on a 3rd-and-16 play as he scampered for 20 yards into the end zone to give the Maroon Tide their first lead of the night at 24-20 with 11:46 left in the fourth quarter.

The Galax lead, though, was short-lived as Baylor made up for his fumble on the Bobcats’ next possession, scoring on a 69-yard touchdown run to put Radford (3-1) back ahead 27-24 with 10:34 left on the clock.

Baylor finished the night as the Bobcats’ leading rusher with 171 yards on the ground.

Ashworth then stepped up on special teams midway through the fourth with a 32-yard punt return that put the Maroon Tide inside the Radford 25.

Radford’s defense did hold Galax without a first down, but Vera was able to step up like he did at the end of the first half as he connected on a 38-yard field goal with 3:16 left to tie things up at 27.

“They kind of seized momentum so give them credit,” Radford coach Michael Crist said. “I did think they wore on us in the run game in the second half, and our execution wasn’t where it needed to be.”

Galax's Ian Ashworth returns a punt against Radford during an overtime win.

Galax's Ian Ashworth carries the ball down close to the goal line as Radford's Max Kanipe defends during the Maroon Tide's first overtime possession. Ashworth would score on the next play for a 34-27 lead.