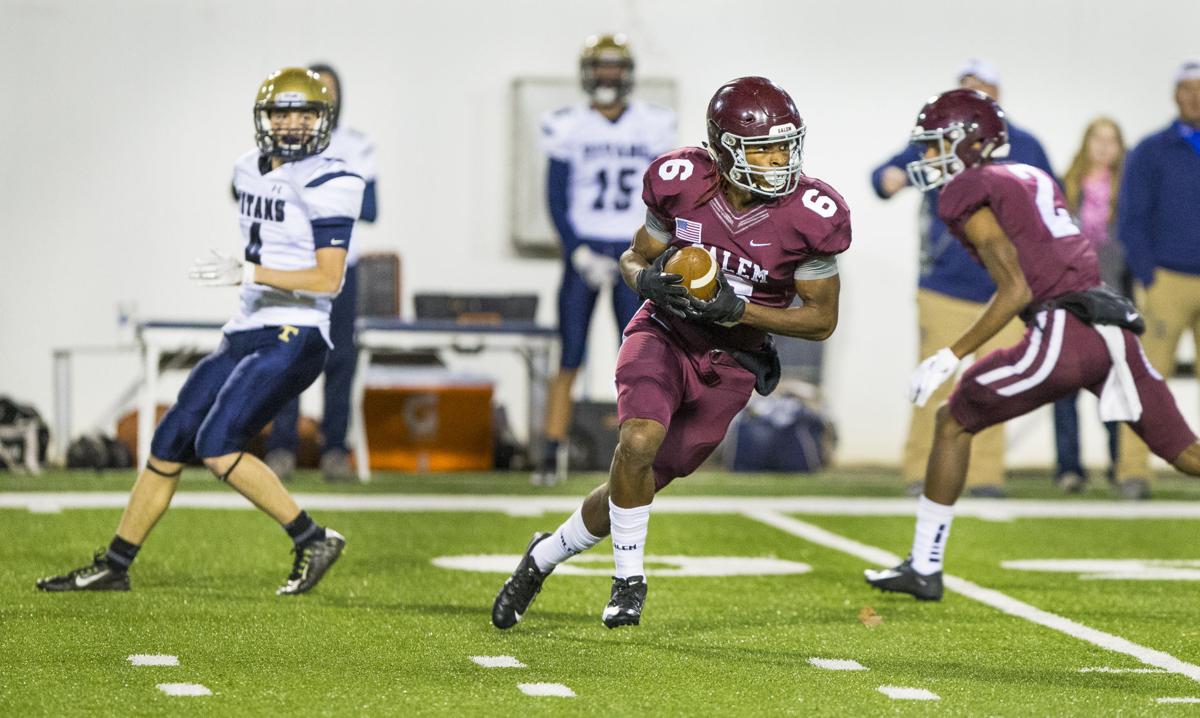 Salem’s Jayden McDonald runs with the ball during the 2019 football season. 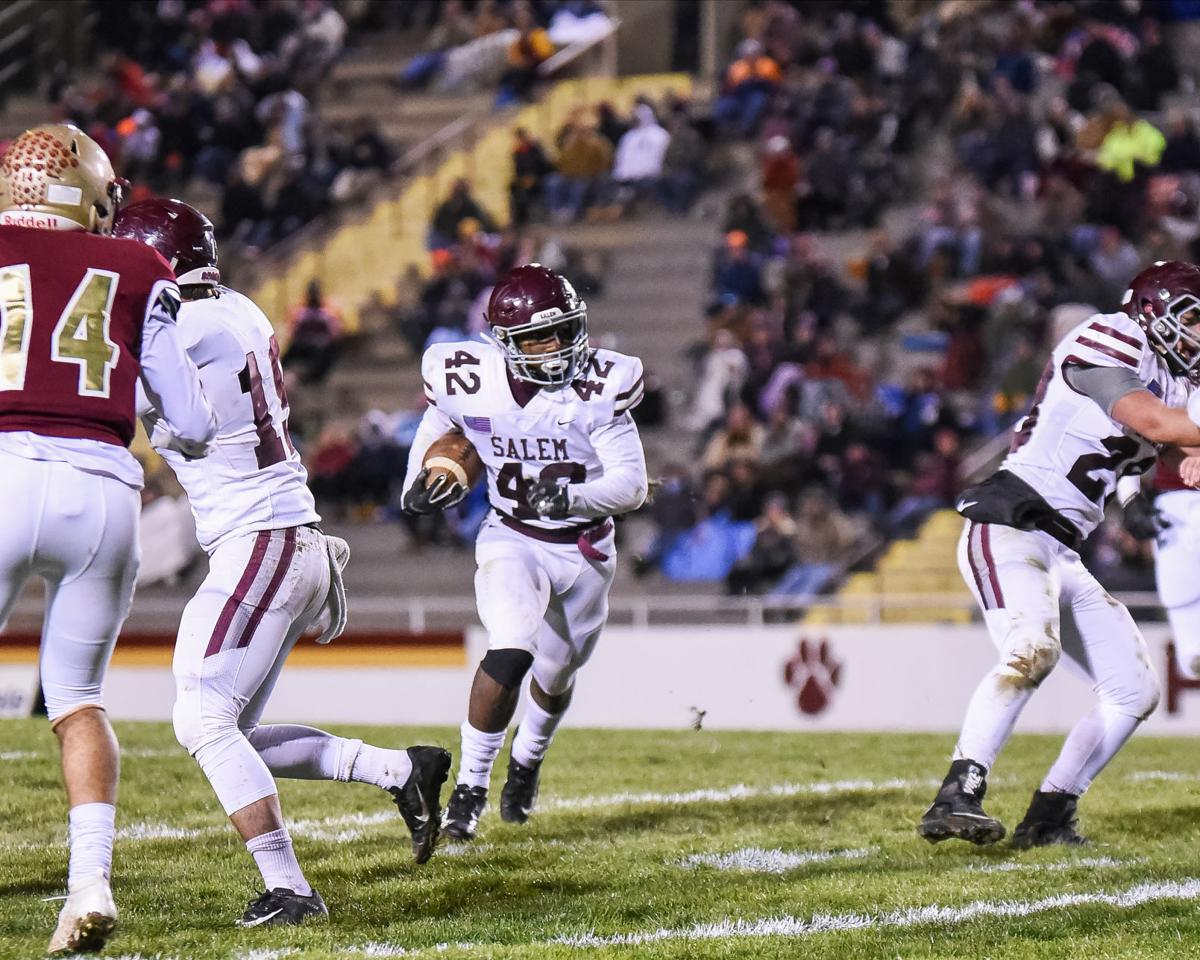 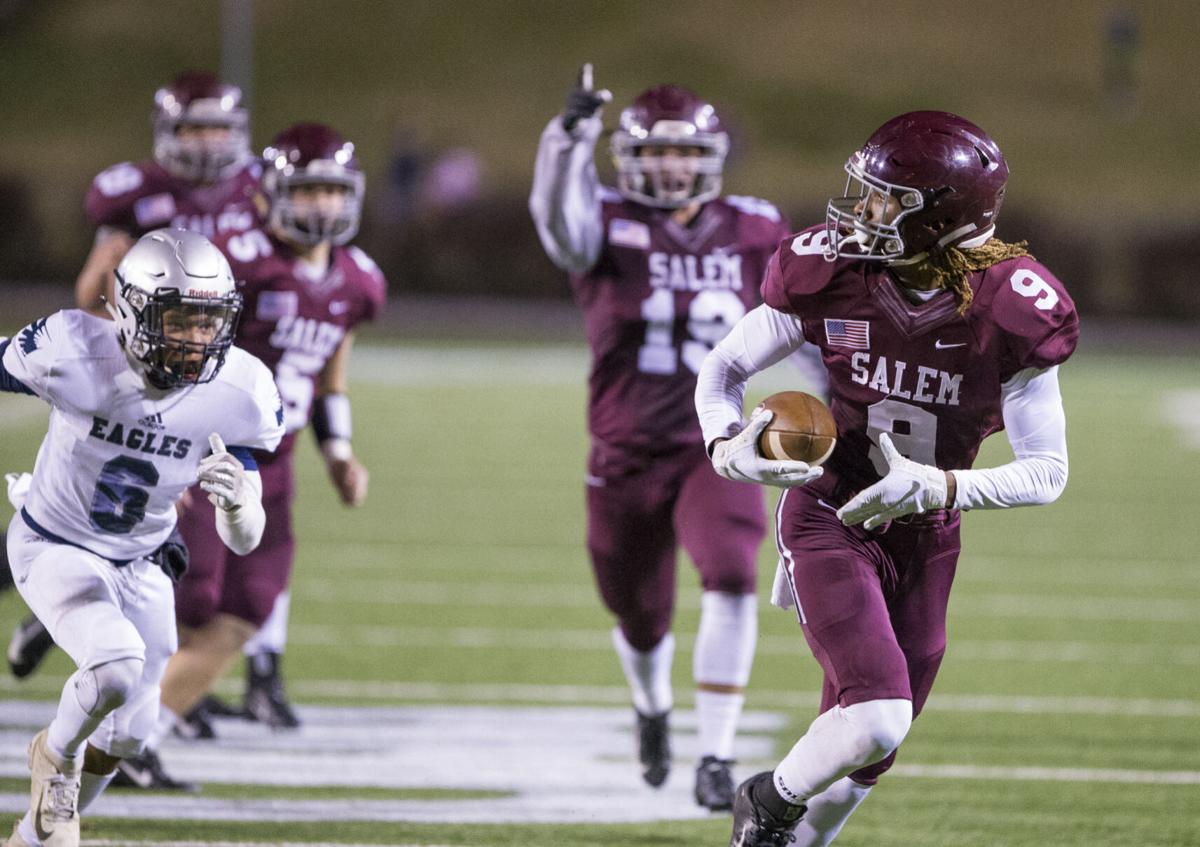 Salem’s Jorden McDonald (right) returns a fumble for a touchdown during the 2019 state football playoffs.

For the second time in two weeks, a trio of rising seniors from the same school have committed to the same major-college program.

This time they all did it together as Salem running back/linebacker Zavione Wood and defensive backs Jayden McDonald and Jorden McDonald cast their lot Saturday with Sun Belt Conference member Louisiana-Monroe.

The football program began in the 1950s in the junior college ranks before joining the NAIA and eventually becoming an NCAA Division I Independent.

The school’s campus in Monroe is located approximately halfway between Shreveport, Louisiana, and Jackson, Mississippi, on Interstate 20.

“They did give us a virtual tour on a Zoom call,” said McDonald, who chose UL-Monroe over an offer from Marshall.

McDonald said he and his brother got together with Wood and decided to commit Saturday as a trio.

Wood and the McDonald twins were mainstays as juniors on Salem’s 2019 team that finished 12-2 and reached the VHSL Class 4 semifinals before losing to eventual state runner-up Tuscarora.

Jayden McDonald made the first team at defensive back on the VHSL Class 4 all-state team, while Wood was a first-team All-Region 4D selection and a second-team All-Timesland choice at linebacker.

Now at 6 feet, 4 inches and 215 pounds, the McDonald twins have bulked up considerably since December when they played at 185 pounds.

The VHSL Executive Committee is scheduled to meet Monday to determine if and when fall sports, including football, will be played in 2020-21. It is expected that the league will attempt to play its fall sports from a window beginning March 1 and running through May 1.

McDonald said Saturday he and his brother considered bypassing a spring football season in their final year as Salem Spartans.

“At first we were thinking about [not] playing because we didn’t want to risk the injuries,” he said. “But since we committed to Louisiana-Monroe, they said it didn’t matter if we played or not.

Wood said he sent UL-Monroe a video after the Warhawks began recruiting the McDonald brothers.

“When we got the opportunity, we just went with it,” he said. “We had a talk about it first.”

Wood said he is 100% set on playing for Salem as a senior, even in the spring.

School divisions in the Roanoke Valley are using measures of COVID-19 spread to determine whether they will play winter sports. The season doesn't open until next month, but the numbers now are not even close to being at acceptable levels.

Gov. Ralph Northam’s announcement Friday of restrictions on the size of public and private gatherings in response to an increase in COVID-19 c…

With spectator limit at 25, visiting fans might be shut out

Timesland athletic directors and administrators are processing Friday's mandate by Virginia Gov. Ralph Northam that limits the number of spectators at indoor and outdoor prep sports events to 25.

Kevin Garst has resigned after a 14-year tenure in charge of the boys basketball program at Salem High School, where he won a state title as both a player and a coach.

Radford High School guard Cam Cormany took a big step toward securing his future Wednesday when he made a commitment to play at the Naval Academy.

Salem’s Jayden McDonald runs with the ball during the 2019 football season.

Salem’s Jorden McDonald (right) returns a fumble for a touchdown during the 2019 state football playoffs.