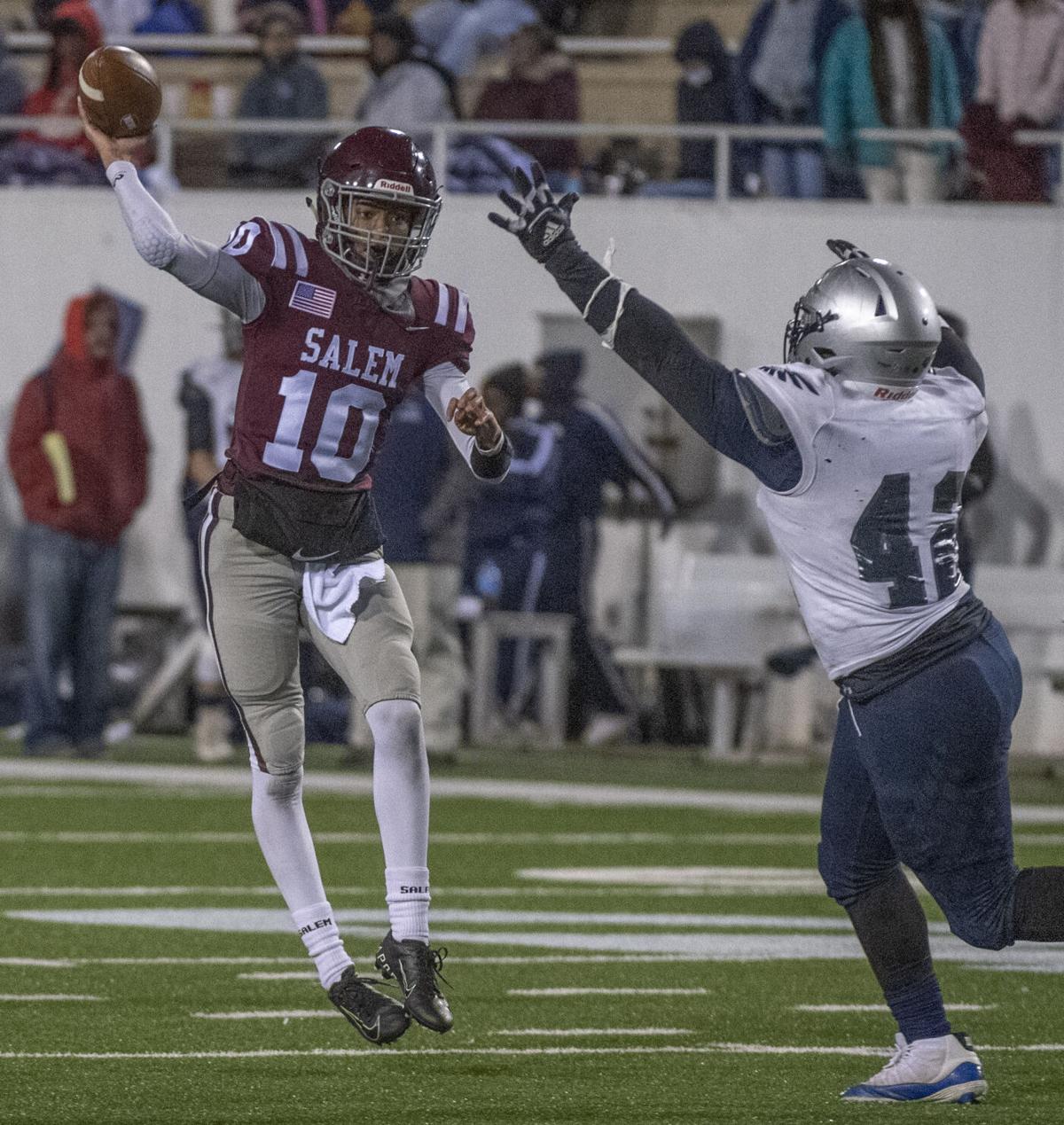 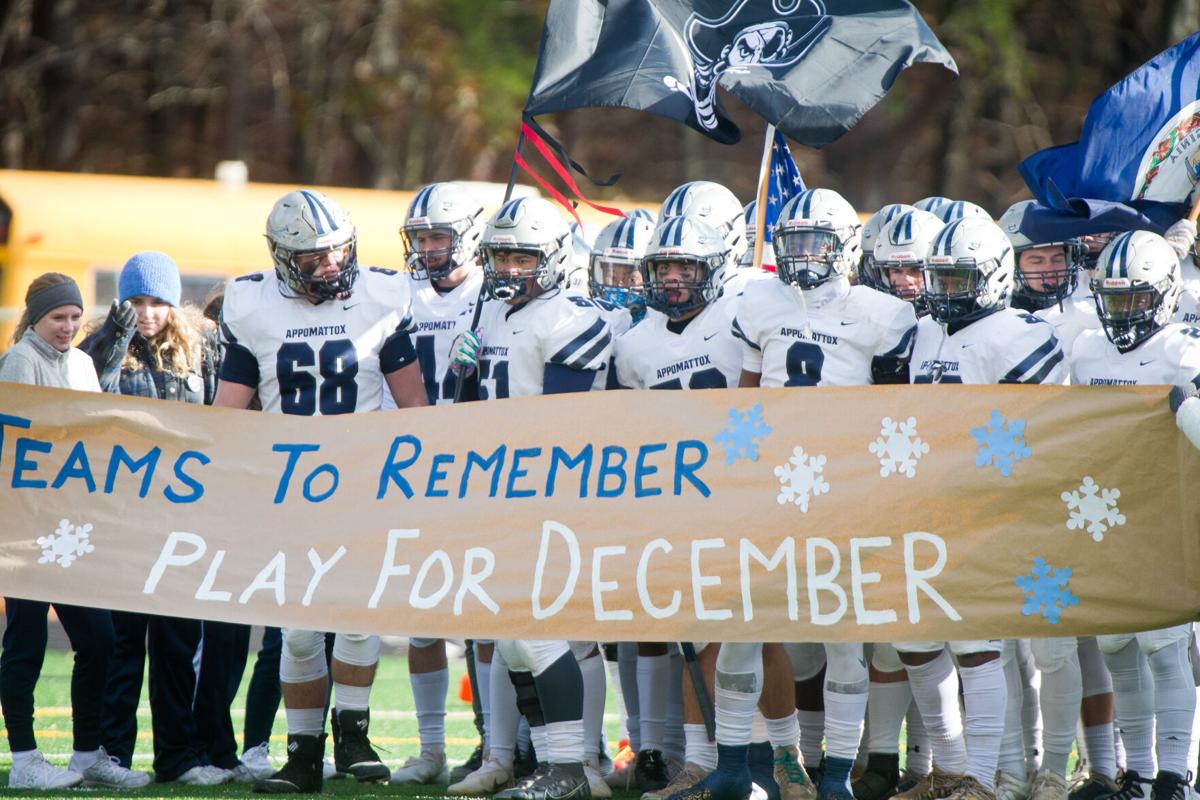 Appomattox County prepares to take the field before their game at Glenvar High School on Friday.

Is there an echo in here?

Shout out of the name of one of the 2020 VHSL football champions. You might hear it again.

Heading into this week’s state semifinals, five teams that won championship in May in the delayed 2020 season have a chance to repeat.

Class 3 is the only division where a new champion is sure to be crowned as Lafayette was knocked out of the Region 3A playoffs in the first round.

Oscar Smith has played in five of the last six Class 6 championship games, losing three in a row to Westfield from 2015-17.

Appomattox County is in the Class 2 final for the sixth time in seven years with a 5-0 record in state finals.

The team that interrupted the Raiders’ streak was Graham in 2019. The G-Men play Appomattox on Saturday in Bluefield.

for VHSL playoff recordSalem’s 10 state football championships trail Hampton’s 17 at the top of the VHSL list, but the Spartans can pass the Crabbers in one postseason statistic.

Salem needs a victory at home Friday over Broad Run in a Class 4 semifinal to take over the No. 1 spot for most postseason wins since full VHSL playoffs were instituted in 1970.

Salem’s 48-14 victory Friday over George Washington improved the Spartans’ postseason record to 79 victories and 23 losses. Salem’s total does not include the two playoff wins in 1971 by Salem’s predecessor, Andrew Lewis High.

Hampton and Salem sit atop the VHSL list with 79 playoff wins since 1970. Twelve of Hampton’s 17 championships have come since the ‘70 season.

All of Salem’s playoff games have taken place since 1986. The school did not open until 1977.

Don’t look now, but Riverheads is coming up fast on the outside with eight state championships.

Riverheads already holds mark for most titles in a row

Riverheads can add to its VHSL record of five consecutive state titles if the Gladiators win again this year.

Since losing 7-6 to Galax in the 2015 state final, Riverheads has a streak of 21 consecutive playoff wins heading into Saturday’s semifinal against Essex.

The Augusta County school also has a 47-game overall win streak since a 28-0 loss to East Rockingham in 2018.

Galax will play in its seventh straight state semifinal Saturday at unbeaten Holston, which is in the semis for just the third time.

Holston and J.I. Burton played the lowest-scoring posteason game in VHSL history, a 2-0 Burton win in 2009.

That game was played at Emory & Henry College, but Saturday’s game will be at Holston’s field in Damascus.

Liberty Christian attempting to be first private school in final

Lynchburg’s Liberty Christian Academy is one win away from becoming the first private school to make a VHSL football final.

The Bulldogs will play Abingdon at Liberty University’s Williams Stadium at 2 p.m. Saturday.

If LCA makes the state final, it would be played on the Bulldogs’ home field.

The Dec. 12 state finals — Classes 6 and 5 at Old Dominion University in Norfolk, Classes 4 and 3 at Liberty University in Lynchburg and Classes 2 and 1 at Salem Stadium — return to the larger venues after they were played on high school fields in May.

The kickoff times have been flip-flopped from usual order.

Tickets to semifinals, finals must be bought online in advance

Spectators who wish to attend this week’s semifinals and next week’s championship games will not be able to walk up to a ticket window and hand over cash.

Tickets must be purchased through the ticketing service GoFan, either through a computer or mobile device.

The GoFan links can be accessed through the VHSL website at vhsl.org.

Tickets were scheduled to go on sale at 6 p.m. Monday.

Long before he was governor, Northam helped Floyd family through 'the lowest time of our life'

Dr. Ralph Northam, then a pediatric neurologist at Children's Hospital of the King's Daugthers in Norfolk, helped Brian and Desirae Harman navigate a tragic situation with their 4-year-old son.

Northside rallies just in time to turn back Lord Botetourt

Cave Spring played solid defense and ran a transition offense efficiently to take down Pulaski County, which had only eight healthy players.

Appomattox County prepares to take the field before their game at Glenvar High School on Friday.