US to resume policy for asylum-seekers to wait in Mexico

In unusual October heat, a second half push brings victory for North Cross in afternoon game
0 comments
Share this
{{featured_button_text}}
1 of 6 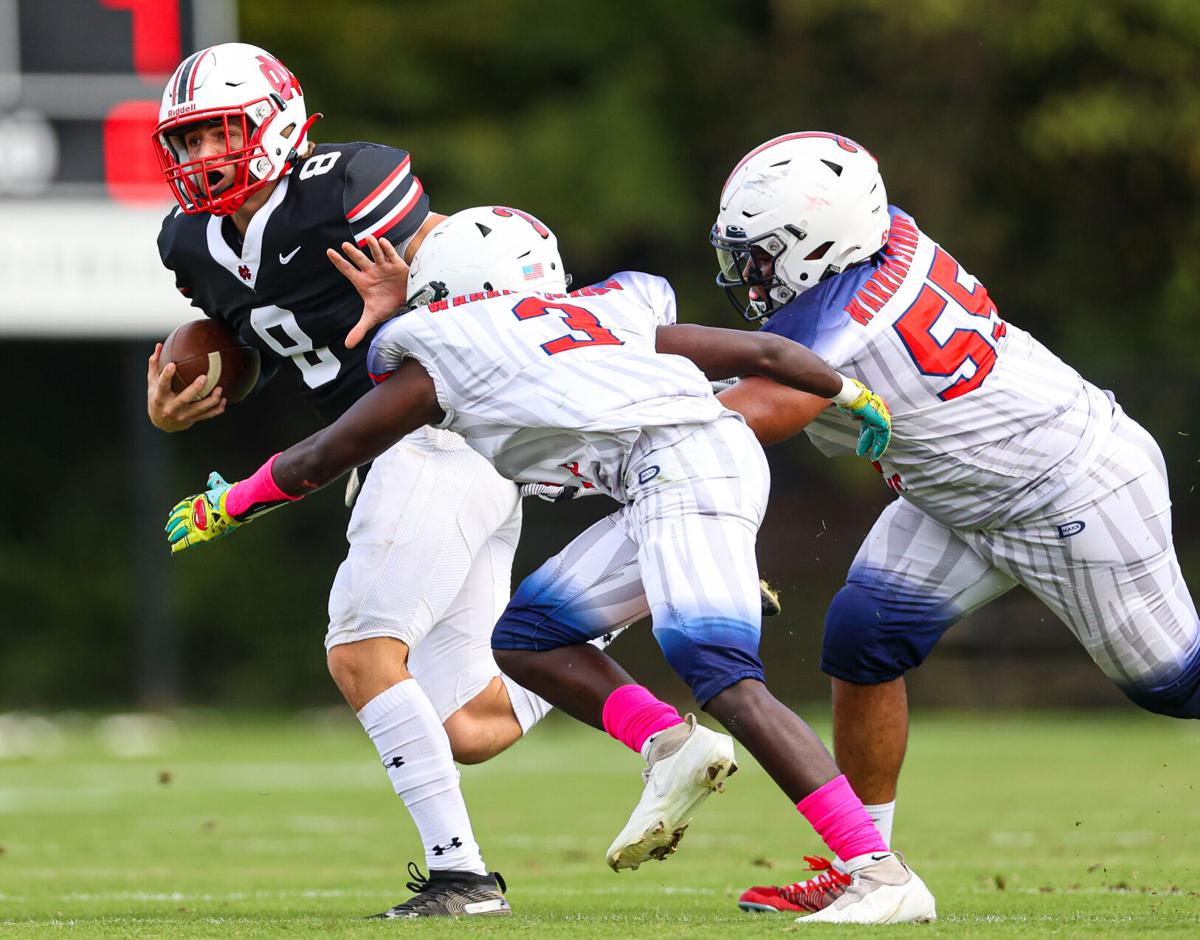 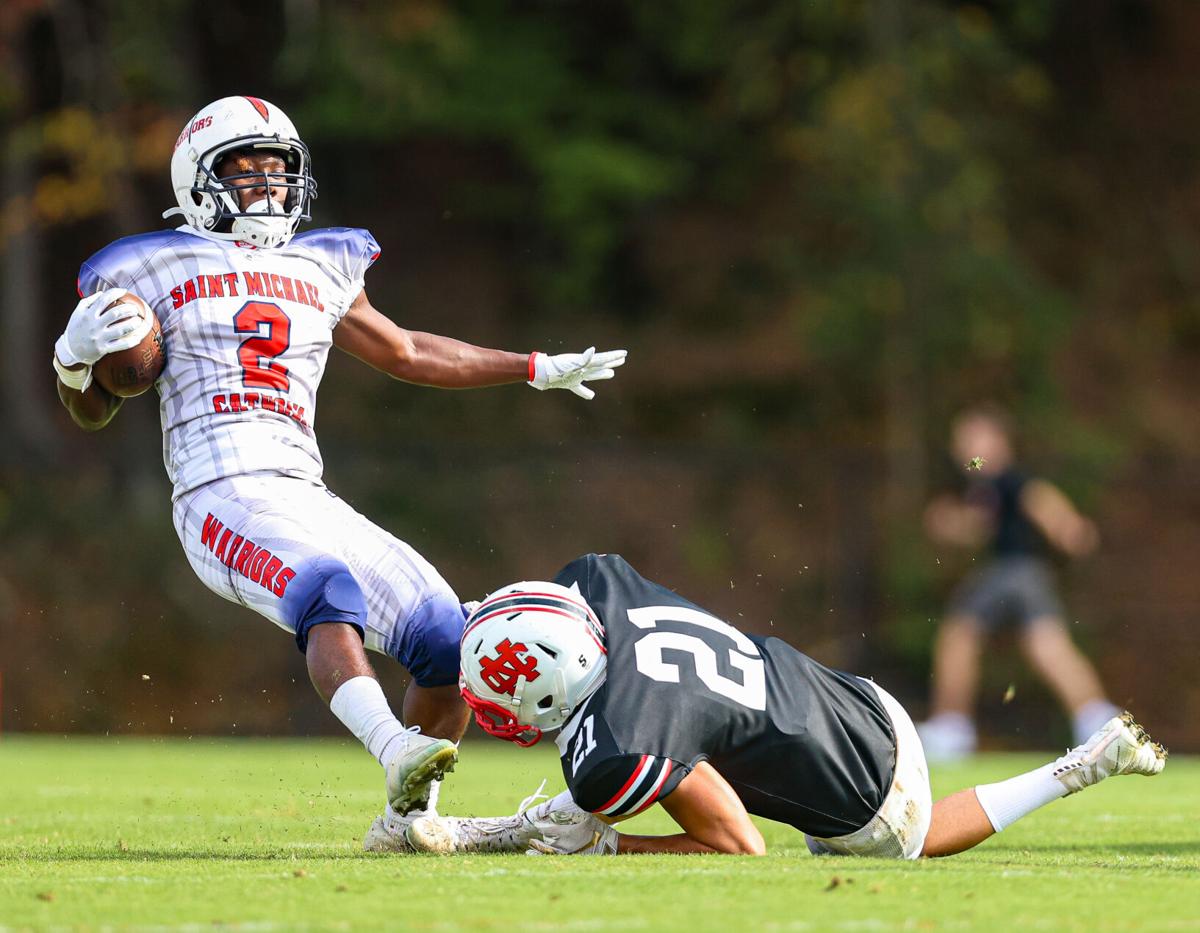 St. Michael the Archangel’s Sidney Jones (2) is taken down by North Cross’s Ethan Ferguson (21) on Friday at North Cross. 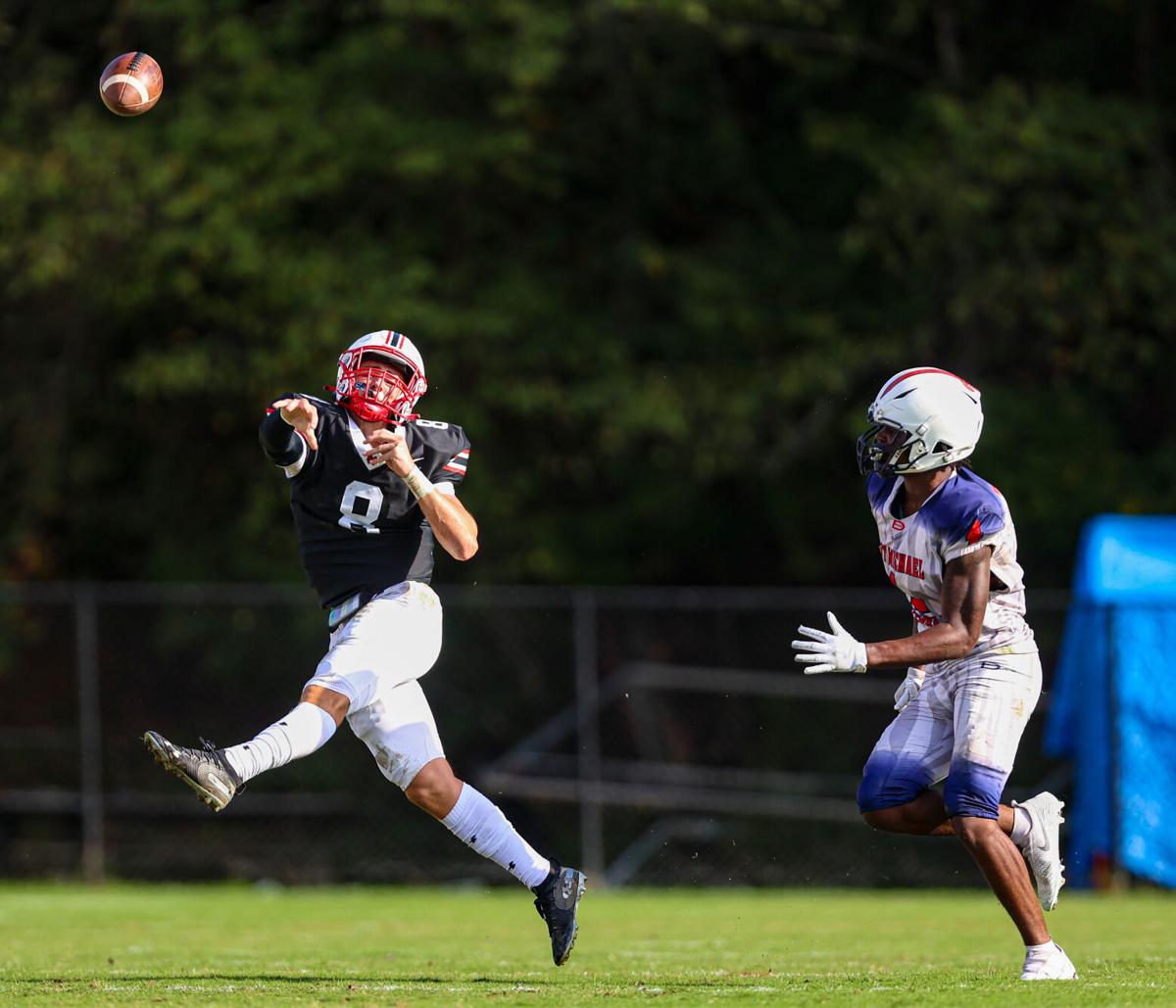 North Cross’s Connor Lange (8) throws a pass in a game against St. Michael the Archangel on Friday at North Cross. 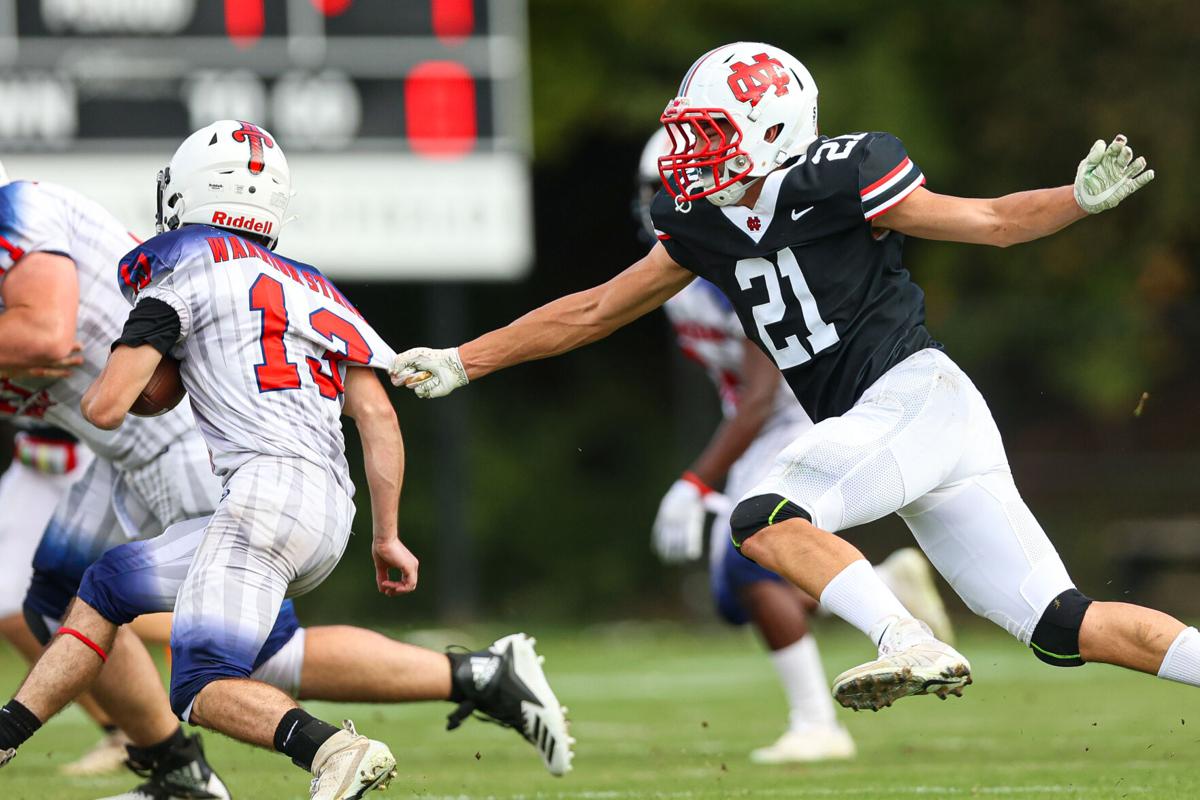 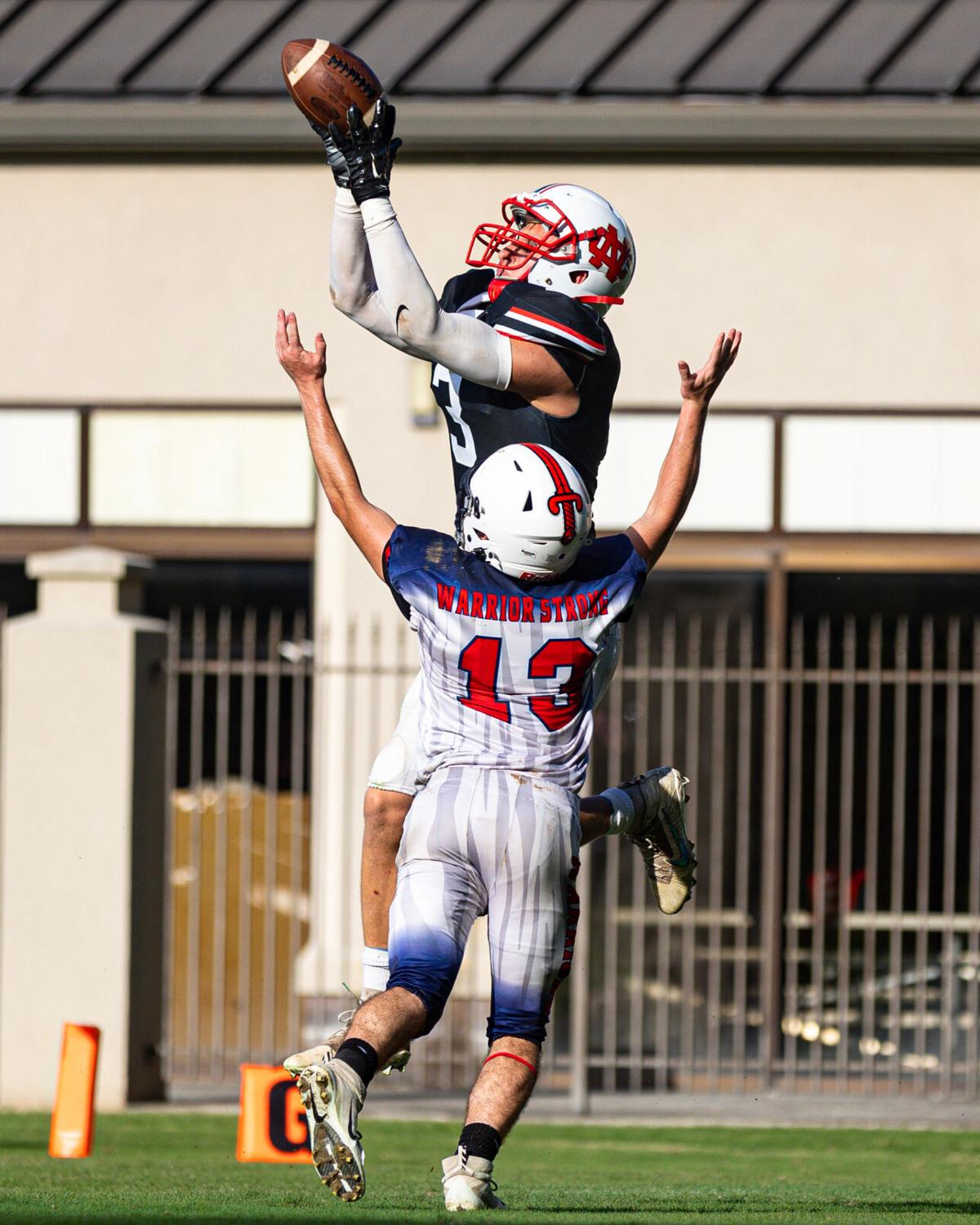 North Cross’s Lambert Raczynksi (3) attempts a catch over St. Michael the Archangel’s Hunter Showers (13) in the second quarter of a game on Friday. 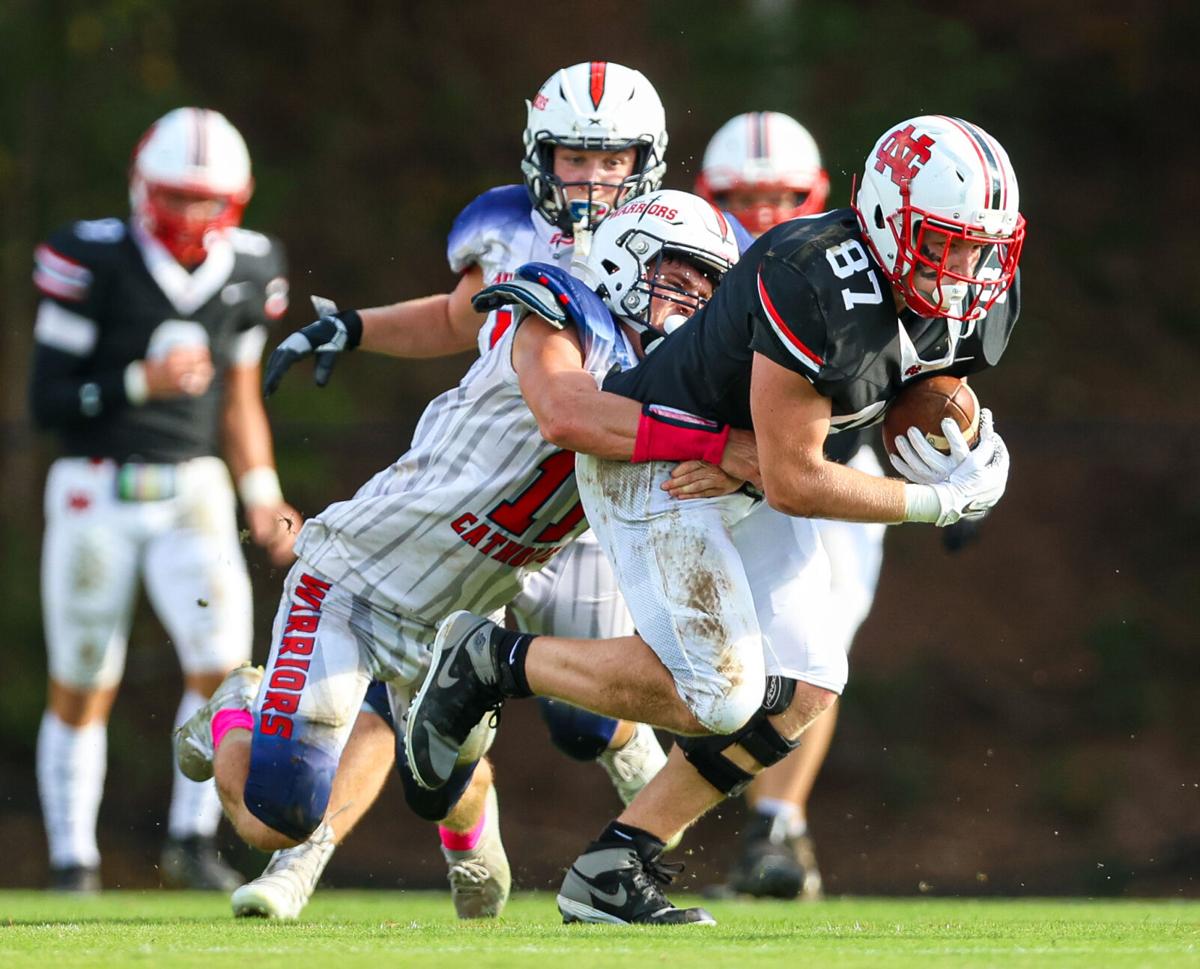 By Troy Sarver Special to The Roanoke Times

They may not have been as efficient as they had been a week earlier, but the North Cross offense got the job done when they needed to on Friday afternoon.

North Cross (6-1) scored on every offensive position and totaled 66 points in a victory over Giles Oct. 8, but the going was much tougher against the visitors from Fredericksburg as the Raiders were held to one touchdown in the first half and went into the break tied at 7-7.

Johnson looked like he broke the tie on the second play of the third quarter when he got loose and made it to the end zone on a 61-yard run, but the play was called back due to a holding penalty against the Raiders.

North Cross did not score on that drive, but they were not held back for much longer. After the Raider defense stopped the Warriors on a fourth down play at midfield, North Cross drove 51 yards in nine plays on their second possession of the third capped off by an 11-yard touchdown run up the middle by Johnson to make it 14-7 with 3:04 left in the quarter.

“Everyone kept their composure in the first half and then we came out with more intensity in the second half,” Johnson said. “The (offensive) line stayed strong and kept getting a great push.”

On a sunny afternoon with temperatures in the 80s, the Raiders finally began to wear down St. Michael in the fourth. With 8:31 left in the game Raiders quarterback Connor Lange finished off a 7-play, 73-yard drive with a 6-yard TD run to make the score 21-7.

Johnson closed out the scoring minutes later with his second touchdown run of the day from five yards out to make it 28-7 at the 3:07 mark of the fourth.

“We lost the fourth quarter. They were running through tackle after tackle,” St. Michael head coach Hugh Brown said. “Our depth hurt us today. We had some guys banged up early and we had spots where we had to improvise, but they made plays and we didn’t.”

The Raiders pulled the game out despite throwing two interceptions, losing a fumble, and having three touchdowns called back by penalties.

“We hadn’t thrown an interception before today all year. That hurt us on offense and those errors kept points off the board,” North Cross head coach Stephen Alexander said.

St. Michael (4-2) scored on their first possession of the day moving 81 yards in eight plays. Running back Melvin Spriggs eventually scored on a 17-yard touchdown run to make it 7-0 with 8:12 left in the opening quarter.

After the opening drive, though, North Cross defensive coordinator Shannon Taylor made some adjustments and the Raiders shutdown the Warriors holding them scoreless the rest of the afternoon.

“Our defense was phenomenal the last three quarters. It’s sounds like a broken record, but it’s a credit to Coach (Shannon) Taylor,” Alexander said.

The North Cross offense struggled through the first quarter and half as Lange saw back-to-back drives end with interceptions. The junior quarterback, however, rebounded late in the half connecting with receiver Moritz Mittendorfer on a 53-yard pass play putting the Raiders in the red zone. Six plays later on a fourth down play from the Warriors’ 12, Lange and Mittendorfer hooked up again on a 12-yard TD pass to make it 7-7 with just 1:41 left before the half.

St. Michael the Archangel’s Sidney Jones (2) is taken down by North Cross’s Ethan Ferguson (21) on Friday at North Cross.

North Cross’s Connor Lange (8) throws a pass in a game against St. Michael the Archangel on Friday at North Cross.

North Cross’s Lambert Raczynksi (3) attempts a catch over St. Michael the Archangel’s Hunter Showers (13) in the second quarter of a game on Friday.