Subscribe
Read Today's E-edition
Share This
Long before he was governor, Northam helped Floyd family through 'the lowest time of our life'
0 Comments
Share this
1 of 3 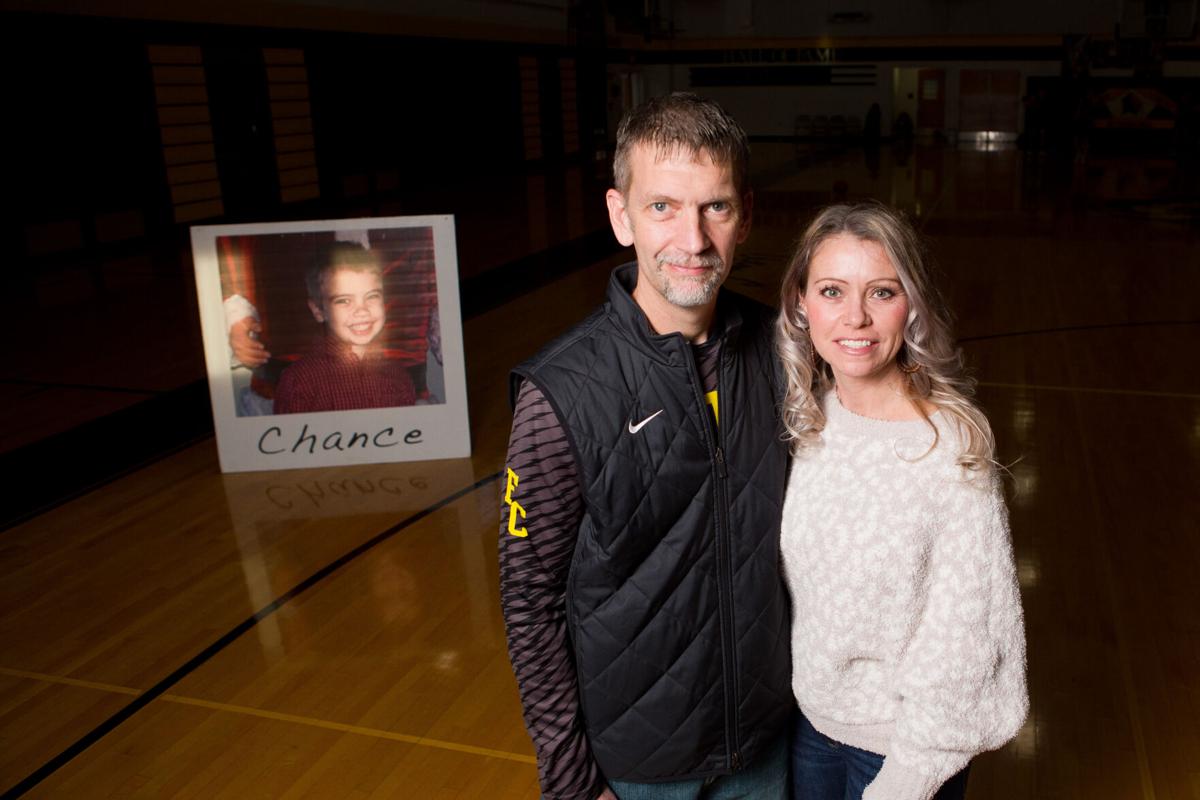 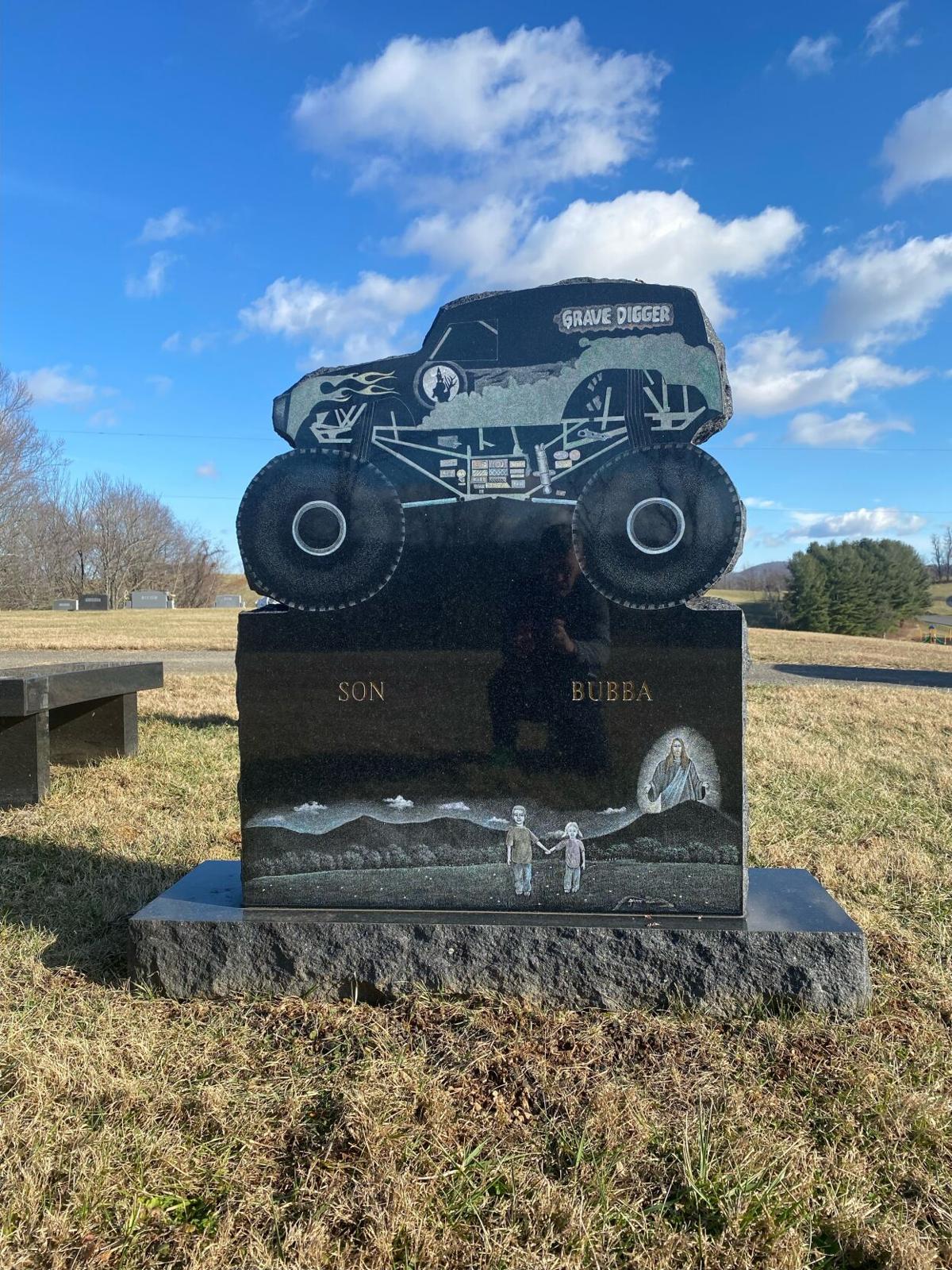 Chance Harman’s tombstone features one of the the monster trucks he loved.

FLOYD — Brian and Desirae Harman knew their son was sick.

Little Chance was a normal 4-year-old until the fall of 2006 when he was diagnosed with a stomach bug and strep throat.

Only this stomach bug was an odd one. Chance would run and play five or six days a week, but on the seventh day he might vomit all day long.

Brian Harman knew symptoms of acid reflux ran through his family. Maybe that was the answer, the young father wondered.

Chance’s pattern continued, so his parents sought medical help for their son.

Chance had a softball-sized brain tumor and would need surgery.

Their world turned upside down, Brian and Desirae, did not know where to turn.

They found help in the tight-knit mountain community of Floyd, where Brian has been the boys basketball coach at Floyd County High School since 2003.

The father of one of Harman’s early players is a local dentist in town named Howard Cundiff.

He knew a friend who might be able to help.

Cundiff is a Virginia Military Institute graduate whose roommate in Lexington had gone on to become a doctor.

In the fall of 2007, Cundiff’s friend was serving as a pediatric neurologist at Children’s Hospital of the King’s Daugthers in Norfolk.

So phone calls were made. Discussions were held. Appointments were set.

Northam leaves office Saturday as the 73rd governor of Virginia, but in late 2007 he had an even bigger job in the eyes of a family from Floyd.

“He was our doctor the entire time,” Brian said “He was the communication guy with us. I could ask him questions that I couldn’t ask a regular doctor. He was that type of person. It was like me talking to you about basketball. He cared about what he did.”

A number of specialists treated Chance in Norfolk, where his condition had a name just as scary as the prognosis.

Chance had a rare medulloblastoma childhood brain growth called Atypical Teratoid Rhabddoid Tumor. Even before doctors knew it had metasticized to other parts of his body, there was less than a 10% hope of survival for a child Chance’s age.

After Chance underwent surgery in Norfolk, Desirae Harman heard words from the surgeon she never will forget.

Dark days and endless nights were ahead.

Bunkered down for seven months in Durham, 135 miles from home and 185 miles from Norfolk, the Harmans still felt a close connection to Northam.

“We had no clue about that world we were going to face,” Desirae said. “Ralph kind of guided us and directed us, not just as a doctor but as a friend to us. We trusted him.

“He’d call in the middle of the night to check on us. He was just so compassionate.”

The Harmans needed a healthy dose.

Brian and Desirae are grateful for the six months they had with Chance after his surgery. They know just about any doctor could have and would have opened doors that enabled them to extend their son’s life and give them a sliver of hope, regardless of the outcome.

“I still didn’t think of him any different than being a friend and helping us get though the lowest time of our life,” Brian said.

Brian Harman missed almost the entire 2006-07 basketball season at Floyd County. He returned from Duke only for his team’s Senior Night against Eastern Montgomery.

It was the only game the Buffaloes won all season.

The Harmans were at Duke with Chance every other minute.

“The world stopped for us,” Desiree said. We spent every moment of every day with him for seven months. We were blessed. He was healthy enough.”

On July 4 near the end of Chance’s struggle at Duke, Brian took his son to an upper floor of the hospital to watch the holiday fireworks.

The viewing area was full of flags, each one representing a cancer survivor.

“I said, ‘Chance, do you see these flags?’” Brian said. “These people beat this thing. We’re going to win this.

So the family prepared to take him back to Floyd for the final days.

“On July 5, we prayed,” Brian said. “He was wore out. We were wore out. We needed a sign. About that time, a guy comes in and says, ‘We’ve got an MRI scheduled.’ We said, ‘Chance, if you see that light, don’t worry about it. You just go on towards it.’

Chance died at Duke before the family could go home.

After Chance’s funeral at Topeka Church of the Brethren in Floyd County, the images of those survivor flags at Duke kept flashing through Brian Harman’s mind.

Then he had another thought.

Maybe it was time to help someone else.

When Cormany saw Harman several months after Chance died, the Radford coach had a suggestion:

“ ‘We need to start [an event] in memory of your son,’ “ Cormany told Harman.

At the time, the Floyd community was dealing with the loss of two young boys to rare forms of brain cancer.

“That whole thing was on everybody’s mind,” Cormany said. “[Chance] and my son, Cam, were the same age. It just really hit home and it does to this day.

“It’s a parent’s worst nightmare. Maybe it’s some kind of way of healing and keeping his memory alive and making sure it all goes to a good cause.”

The initial Classic, four games among eight local schools played on a single day, has mushroomed into an event that has featured as many as 14 games over a two-day period in early January.

The Classic awards scholarships to local high school seniors and donates what is left over to pediatric cancer research at Duke.

The event attracted some high-level teams with nationally known players now in the NBA such as Mitchell Wiggins, Harry Giles, Cole Anthony and Miles Bridges, a slew of volunteers and a loyal local following.

Rob Fulford was the basketball coach at Huntington Prep in West Virginia when was just getting off the ground. He brought his team to the 2012 tournament and pledged to come the following year.

Suddenly, ESPN wanted Huntington Prep to play in televised game on the same date as the Floyd classic.

“I told them we already had a prior commitment and weren’t going to back out of that,” said Fulford, who is now an assistant coach at Akron. “For us, we all have kids. Those stories hit home to all of us. We’ve all been affected by cancer in some form or fashion.”

Brian and Desirae Harman have three other children, Destiny, a junior who plays for Floyd County’s girls basketball team; Chaycen, a seventh-grader; and Keenan, a fourth-grader.

Chaycen was born two years after Chance died. Chaycen’s first name contains all five letters of his older brother’s name, plus the letter ‘Y’ from ‘Destiny,’ who was 2 years old when Chance got sick.

“We were lucky enough to have more kids,” Brian said.

Chance and Destiny were very close as siblings.

Before Chance had his first surgery, he told his parents he wanted to trace the outline of his hands on his bedroom wall, along with those of his sister with a cross drawn in the middle.

Why did his son get sick? Was it genetics? Was it environmental? Was it something else?

“Chance fell off a swing one time and hit his head. You’re like, ‘Maybe that’s what started it,’ “ Brian said. But you can always say ‘maybe’ but it’s the way it’s supposed to be. But the lives that have changed from that, it’s the reason for it.”

Brian Harman had one thought when he first learned that Dr. Ralph Northam was running for governor:

“Why would he want to do that?”

The Harmans had a chance to ask the same question in person when Democrat made an early campaign stop at The Floyd Country Store.

“He was with some people, but he saw us and said, ‘Hold on a minute,’ “ Brian said. “We got an opportunity to talk. He was the same way then. It wasn’t like he was running for governor. He wasn’t any bigger than anybody else.”

When Northam took the governor’s chair, to the Harmans he was the same person they first saw playing on the floor with Chance in his office in Norfolk.

“I can see the professionalism but I can see he cares,” Brian said. “It ain’t like he changed when he got that role. He was like that, Day 1 when we had him.

“I’m not saying I agree with everything he decided, but person-wise, if I had another situation like this, I would trust anything he said. And I really don’t think it’s because we had a close friend. I’ll go to my grave thinking that.”

Northam will return to his medical practice next week. Opinions on his performance in office are varied, but the Harmans look through their own lens.

When it came time to cast a ballot in 2017, Harman, a Republican, knew exactly what he would do.

At some juncture of the second quarter, perhaps in the third quarter, and most definitely in the fourth quarter, Hidden Valley’s hopes for a h…

Miles Wilson lists his height as 5 feet, 5 inches and if you listen to a William Fleming basketball teammate peering over his shoulder in the …

Chance Harman’s tombstone features one of the the monster trucks he loved.