Looking back at Week 3: William Byrd treated itself to 2013 comeback win in Salem
0 comments
Share this
Only $5 for 5 months
1 of 8 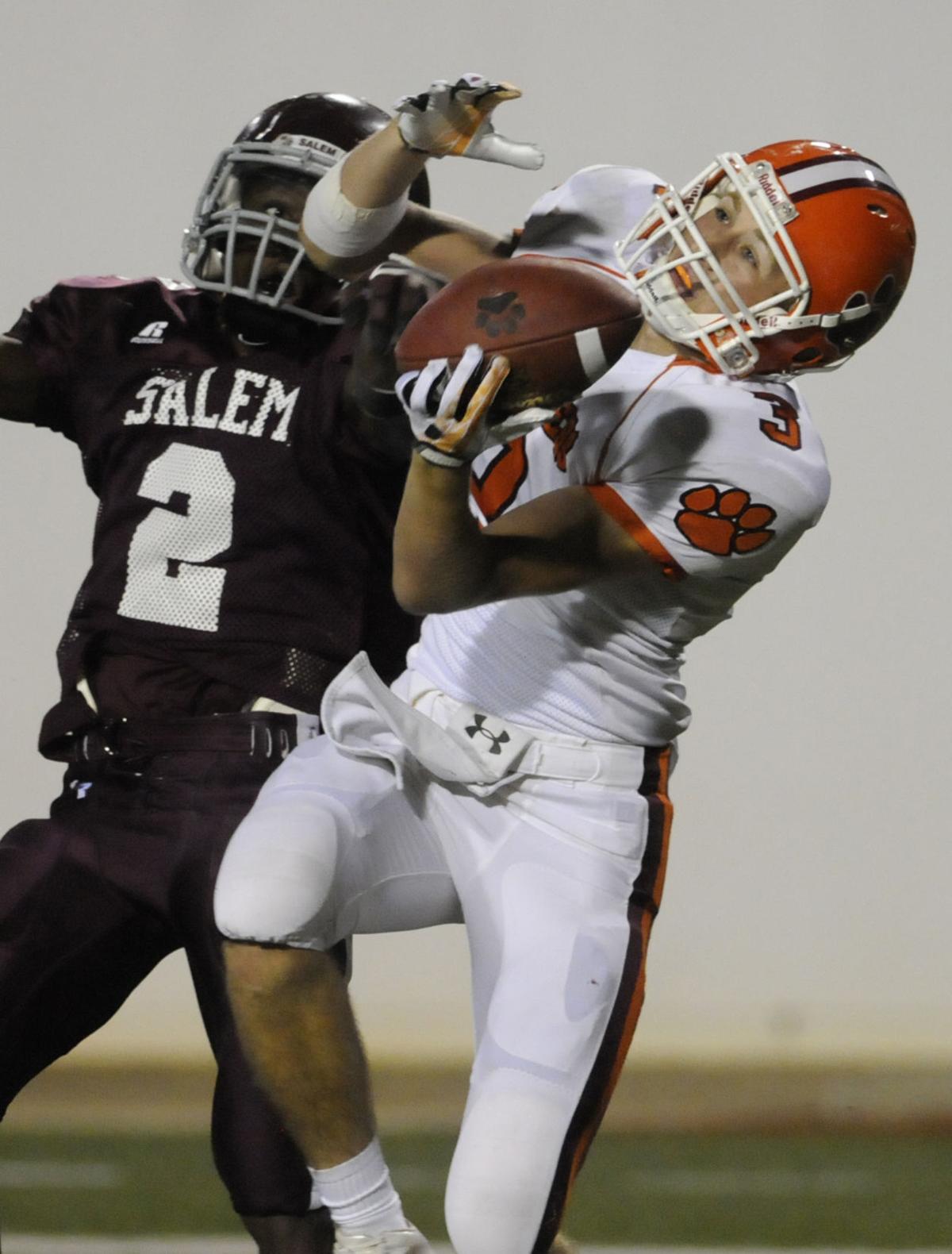 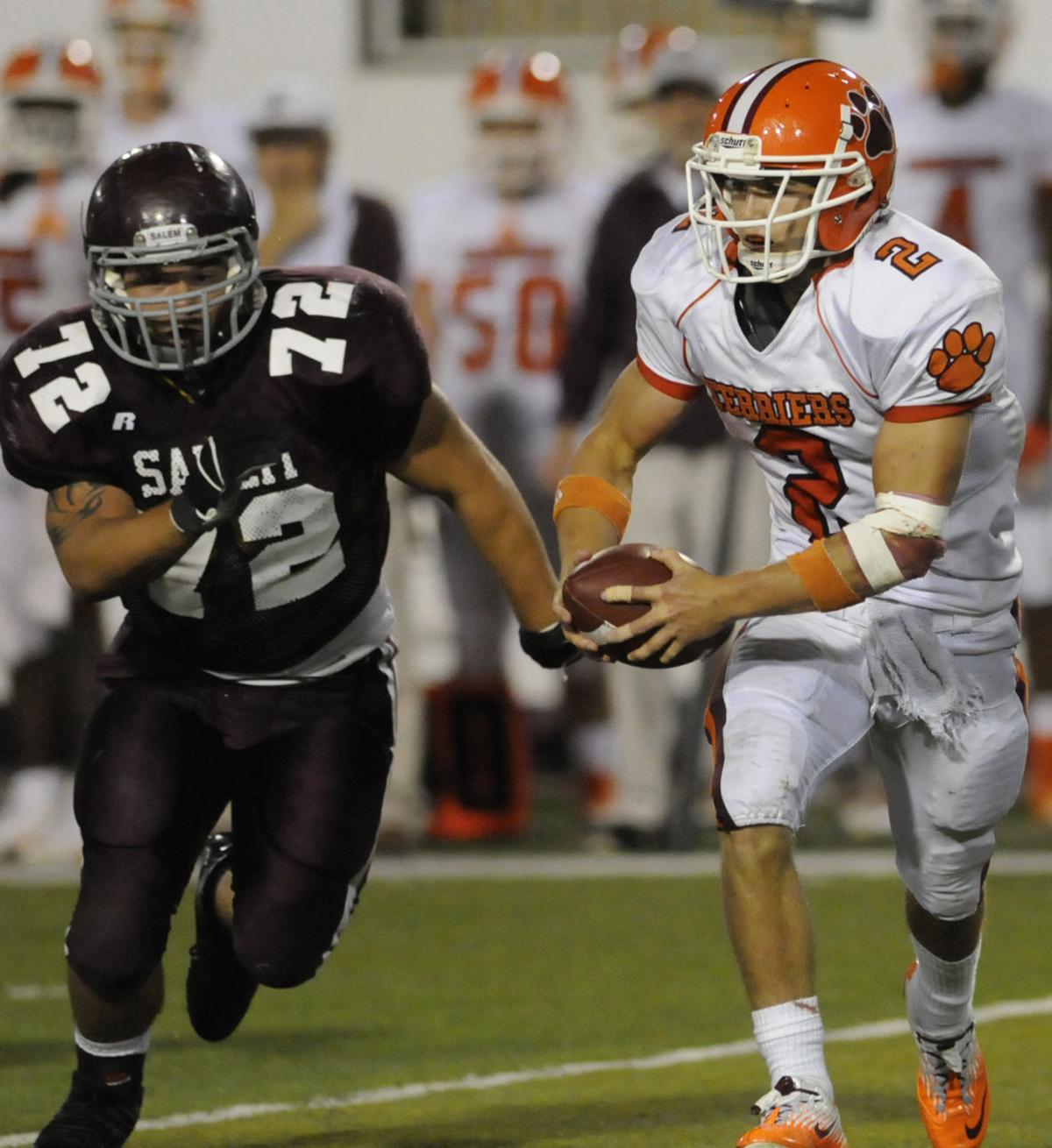 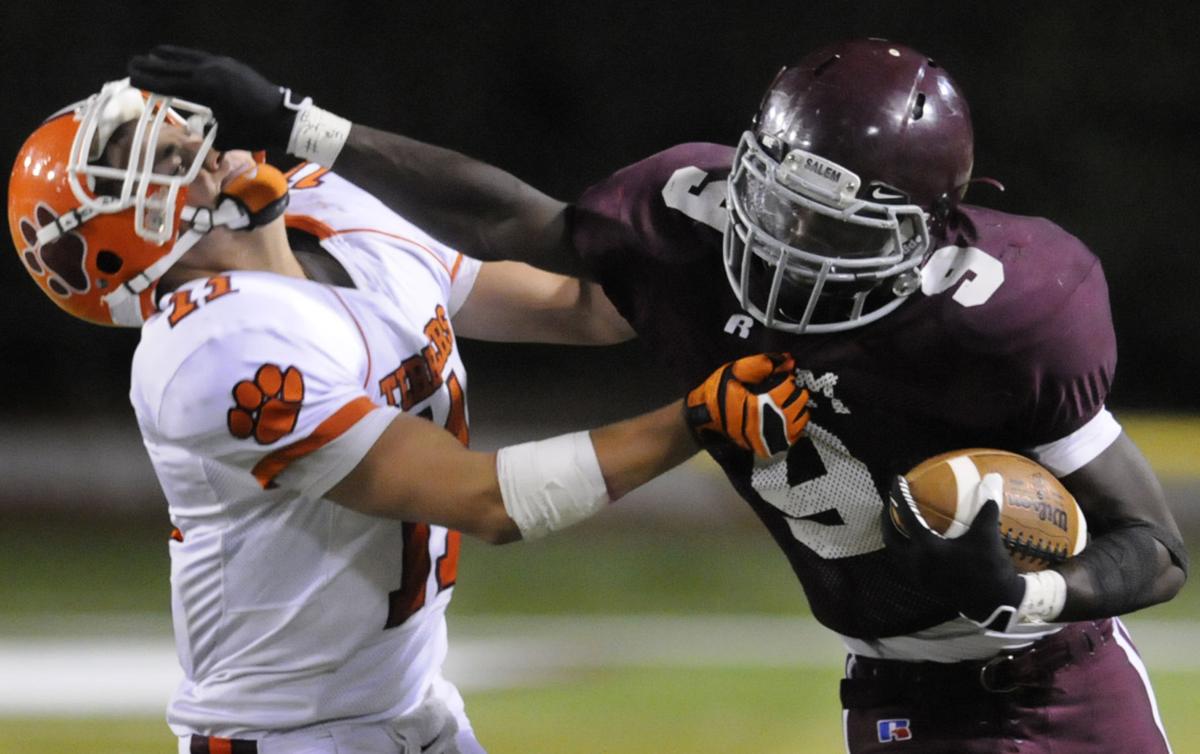 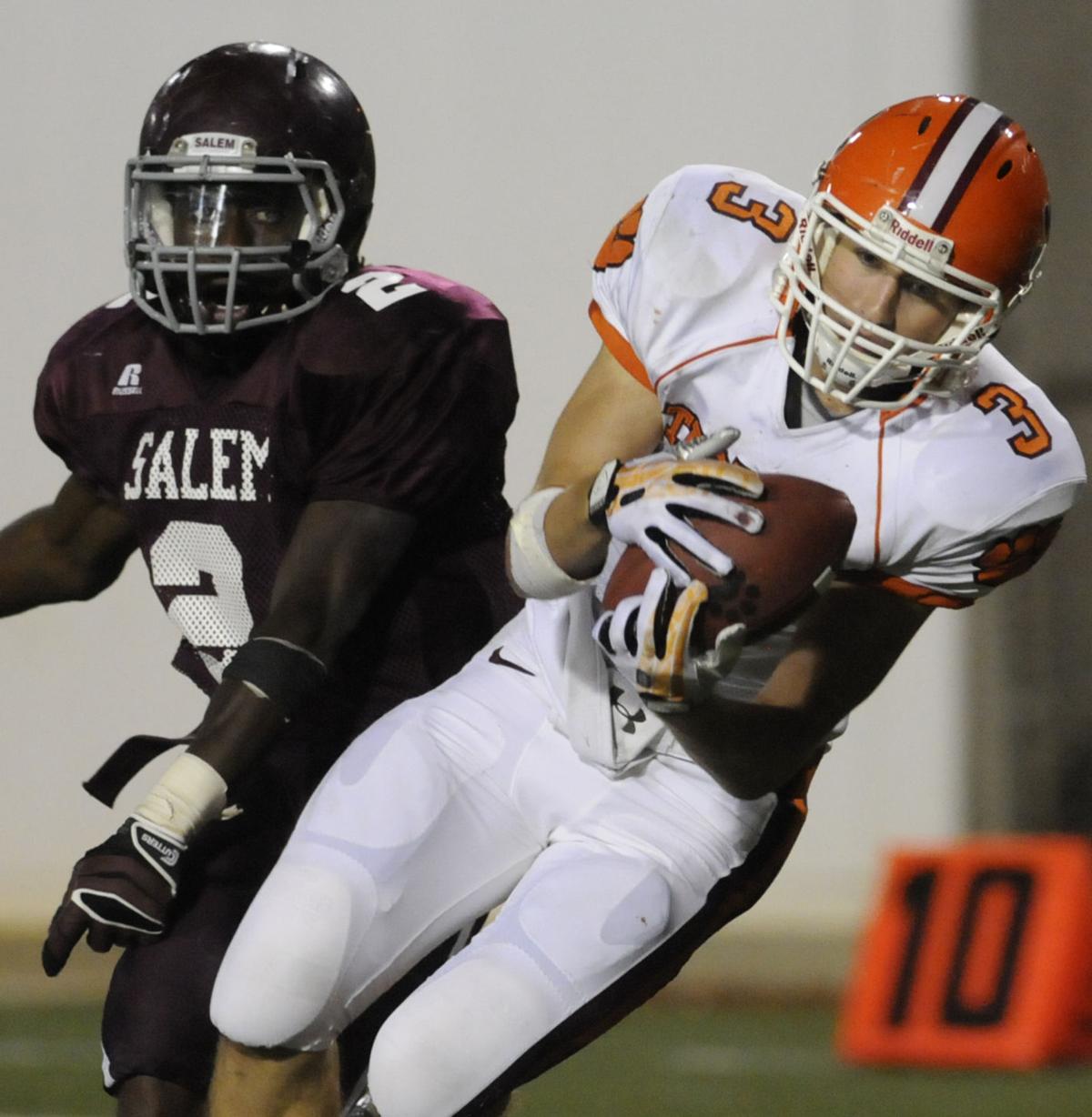 William Byrd’s Joshua Marcus hauls in a late TD pass to set up the Terriers’ 2013 win over Salem as Davonta Womack defends. 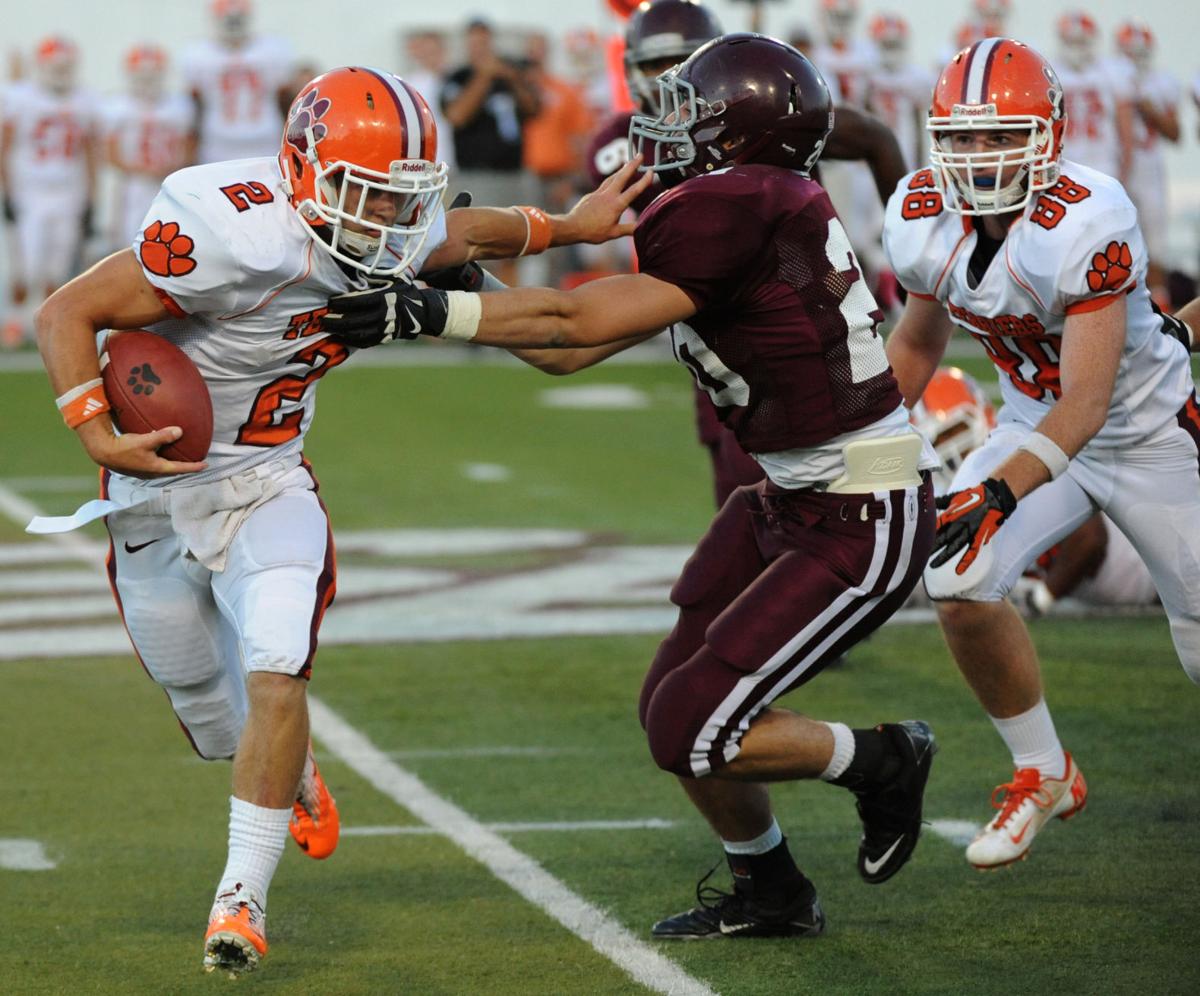 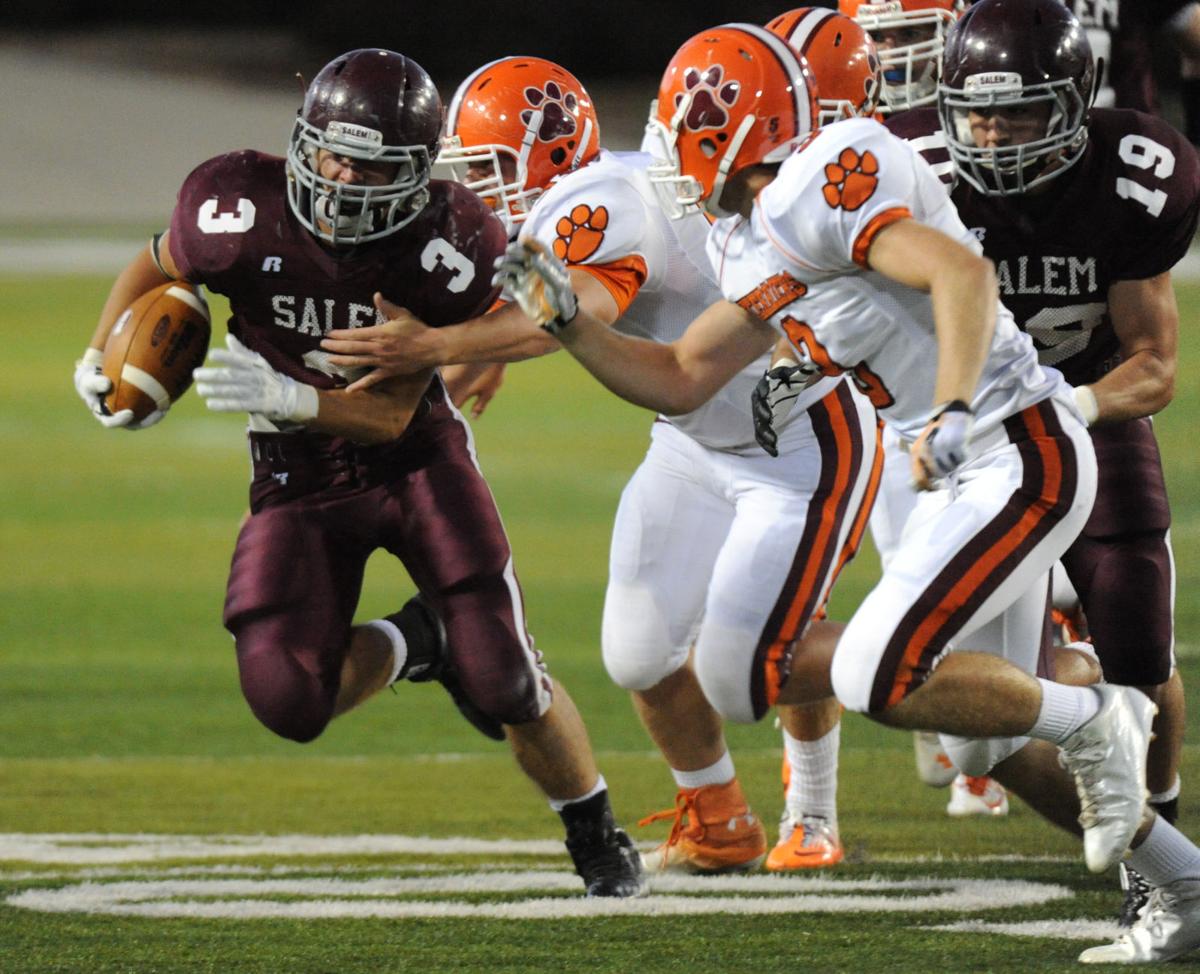 Salem’s Coleman Fox (left) carries the football against William Byrd during their game played on Sept. 13, 2013. 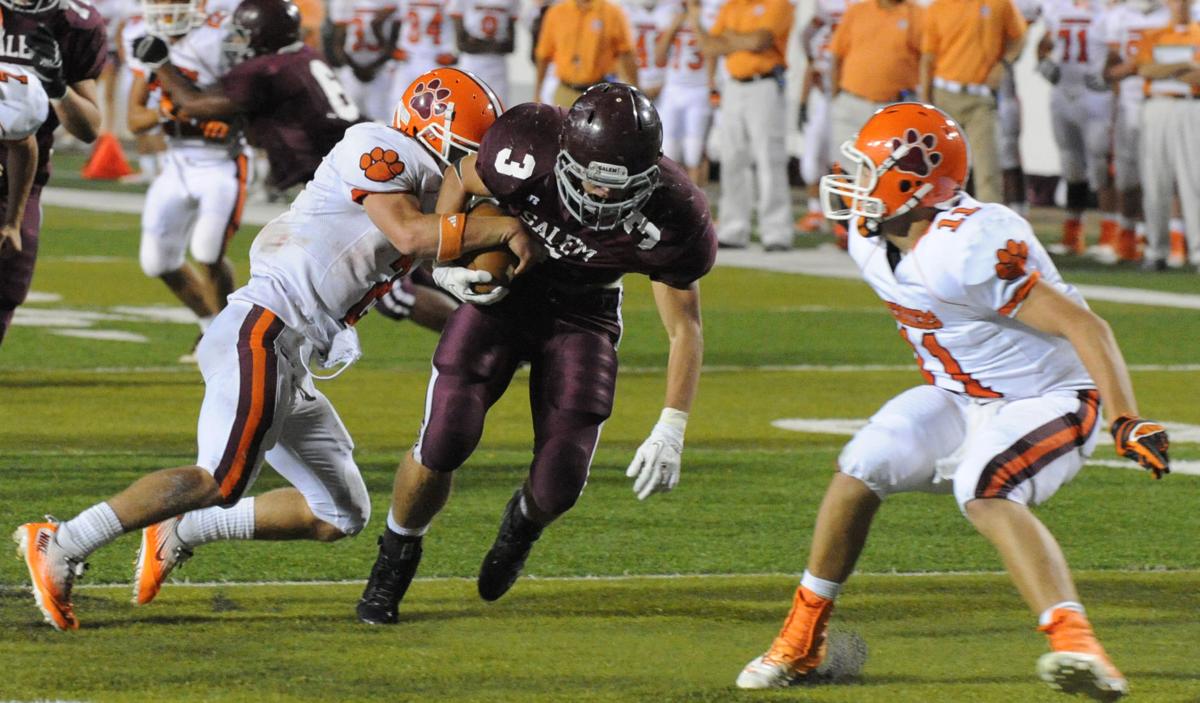 William Byrd's Zach Hill (left) rips the football from Salem’s Coleman Fox, who fumbled in the end zone during their game played on Friday, Sept. 13, 2013.

One look at the shelves of local stores in early September tells the tale.

It’s never too early for Halloween.

William Byrd football coach Jeff Highfill was ready for “Trick or Treat” on the night of Sept. 13, 2013, when the Terriers made their biennial road trip to face the Salem Spartans.

Trailing by a point with 1 minute, 26 seconds left in the game, Highfill dialed up a two-point conversion pass play he first installed several years earlier for a late October game.

“Trick or Treat” called for the ball to be placed on the left hash mark with an unbalanced line to the wide side of the field.

The Terriers sent a man in motion to the wide side, quarterback Zac Hill rolled out in that direction, but he stopped and threw back to tight end James Stinnette, who had leaked out to the other corner of the end zone.

Highfill, who retired after the 2018 season, has long been connected to the city of Salem’s football history.

Highfill’s 38 seasons at Byrd included seven wins in 30 tries against Salem, no mean feat against a program that has won nine VHSL championships.

When the Terriers first played Salem in 1988, two years after the Spartans made the Group AAA Division 6 state final, Highfill said some Byrd fans suggested that he forfeit the game.

“For the first three or four years I actually had parents of players coming to me saying, ‘Why don’t we just forfeit the Salem game so we don’t get anybody hurt?’ ” he said.

Highfill said that was still the mindset until 1993, when Byrd staged a comeback from a two-TD deficit for a 15-14 win over the Spartans in Salem.

“We were down 14-0 in the first quarter. Everybody was saying, ‘Same ol’ same ol’,’ ” he said. “Our own fans didn’t give us a chance. When we won it, there were players laying all over the field crying. It was like we won the national championship.”

Byrd scored back-to-back wins over Salem in 1996 and ’97 as the Spartans’ 1996 team went on to win the Division 4 state championship.

The Terriers bagged three victories in a row over Salem from 2001-03 when Highfill’s son, Jeff Jr., was Byrd’s quarterback.

When Highfill rolled into Salem for the 2002 game, Spartans head coach Willis White had a question for his rival.

“Willis meets me before the game and says: ‘All right Jeff, what trick play are you going to run tonight?’ ” Highfill said.

It turned out to be a flea-flicker that Highfill Jr. threw for the winning TD pass in a 24-20 victory.

Byrd had a nine-year dry spell against Salem when the Spartans scheduled the Terriers as their homecoming opponent in 2013.

Byrd had a 2-0 record for the Week 3 game, and the Terriers boasted a strong offense led by Hill and powerful blocking backs L.J. Williams and Simeon Horstmann.

“That was during run we had there for three or four years where the strongest kids we had in the weight room and everywhere else were our running backs,” Highfill said.

The 2013 Salem team hardly was a weakling.

Byrd promptly fell behind 15-0 on a 46-yard TD pass from Coulling to Parker and a 1-yard run by Fox.

The Terriers answered as TD runs of 11, 7 and 22 yards by Hill put the visitors up 22-15. Hill, one of many Byrd quarterbacks that Highfill basically used as an extra running back in the Terriers’ power offense, finished with 198 yards rushing on 34 carries.

“He led us in rushing, tackling, about everything you could do,” Highfill said.

Salem rebounded for a 29-22 lead on a 4-yard TD pass from Coulling to Fox and a 2-yard run by Devante Payne.

Byrd mounted a drive for the final TD, set up by a brilliant catch by Josh Marcus, a basketball player whom Hill convinced to play football.

Horstmann scored on a 1-yard run, setting the stage for the two-point play as Stinnette latched on to Hill’s pass.

“I had a feeling today at school,” Hill said after the game. “Coach just said, ‘We’re coming into the bully’s back yard tonight and [we’ve] just got to punch them in the mouth.’ They got up on us 15-0 and we never quit.”

Byrd’s 2013 season ended with a second-round loss to Heritage in a Group 3A playoff game.

Salem lost 17-10 the following Friday at eventual Group 3A champion Northside, then the Spartans reeled off nine consecutive wins until a 7-0 loss at Sherando in a Group 4A semifinal.

Salem coach Steve Magenbauer shrugged off his only loss to Byrd in 14 tries after the game by praising the Terriers’ and their style of play.

“They’re one of the few teams left that makes sure they practice physical every day and hits you in the mouth all game,” the former Salem coach said. “That’s why it’s always worked at Byrd.

“You sort of feel what they’re going to do. It doesn’t help much. You’ve got to stop it. I respect that a lot.”

Highfill built the approach into 211 career victories in his 38 seasons in Vinton.

“Discipline and toughness are two things I always thought we can work on and coach,” he said. “Athletes will come and go. If I was going to always count on being more athletic, we were going to be in trouble.”

The Virginia High School League is close to finalizing a structure for postseason play for its fall, winter and spring sports seasons.

The Executive Committee is expected to finalize a postseason schedule during a meeting Sept. 3.

William Byrd’s Joshua Marcus hauls in a late TD pass to set up the Terriers’ 2013 win over Salem as Davonta Womack defends.

Salem’s Coleman Fox (left) carries the football against William Byrd during their game played on Sept. 13, 2013.

William Byrd's Zach Hill (left) rips the football from Salem’s Coleman Fox, who fumbled in the end zone during their game played on Friday, Sept. 13, 2013.