MNF: Latest scores and updates from Chiefs vs. Bills and Cardinals vs. Cowboys

Looking back at Week 4: Historic comeback a useful lesson for new Chilhowie coach in 2013
0 comments
Share this
{{featured_button_text}}
1 of 2 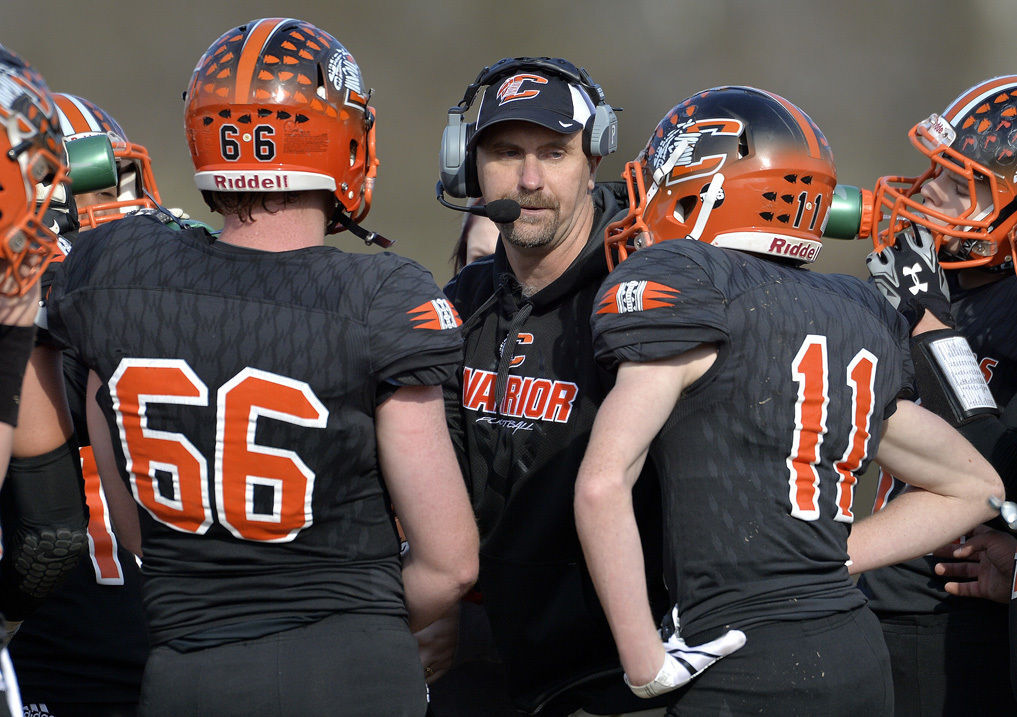 Chilhowie football coach Jeff Robinson, shown in 2017, dialed up a trick play on the game-winning drive. 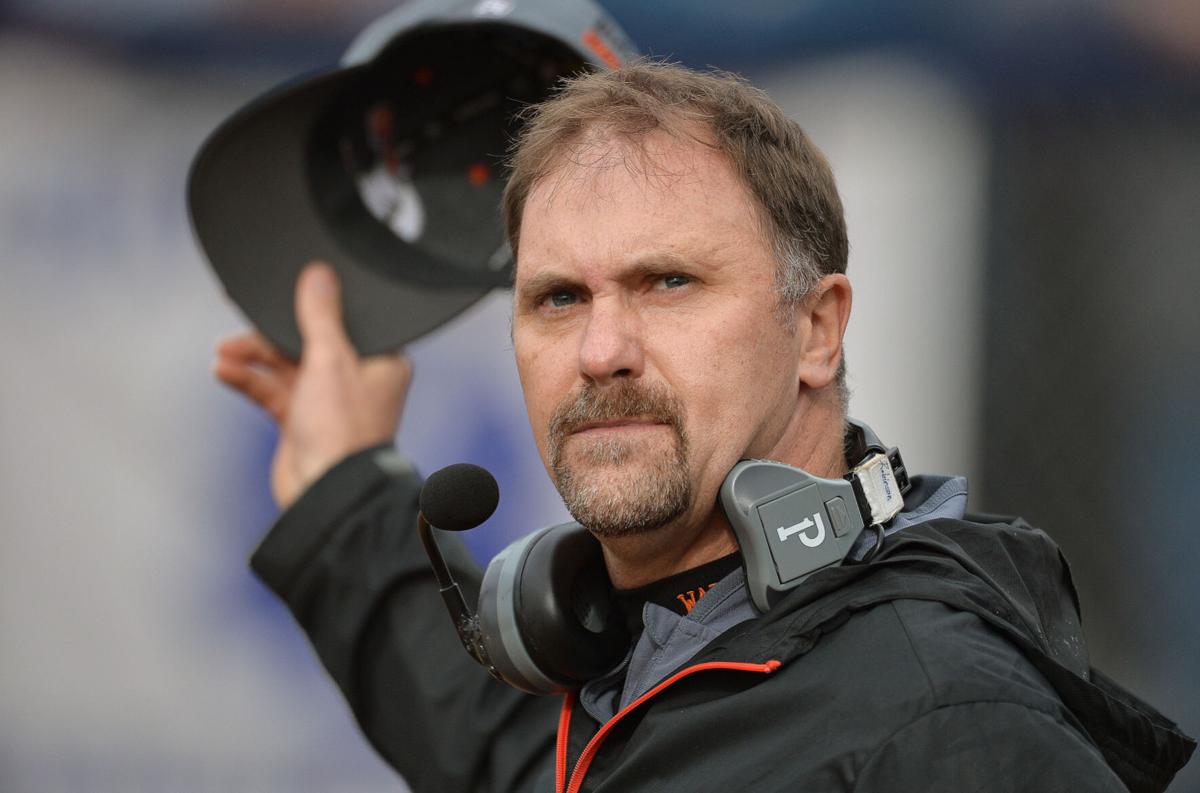 Chilhowie football coach Jeff Robinson has been in charge of the Warriors’ program since 2013.

As the school’s head football coach since 2013, he has helped the Warriors create plenty.

Robinson coached Chilhowie to back-to-back VHSL Class 1 state runner-up finishes in 2017 and 2018 with eight postseason victories, but perhaps no game sticks in his mind more than a regular-season battle with visiting Tazewell on the night of Sept. 20, 2013.

Chilhowie held a 2-1 record in Robinson’s initial season as head coach following wins over Marion and J.I. Burton and a loss to Abingdon, as the Warriors welcomed an 0-3 Tazewell team to town.

The Warriors owned a comfortable 42-21 lead with approximately six minutes to play after the second touchdown run of the game by tailback Justin Jones.

Thinking ahead to the next game against Smyth County rival Northwood, Robinson made a natural decision.

“I remember saying on the headphones, ‘Guys, let’s get our quarterback and running back out. They’re done.’ And we started pulling starters out.

“Tazewell went on about a five-minute drive where they converted about three or four fourth downs. By the time they scored, I had my entire second-team defense out there.”

Then Robinson realized his second-string kickoff return team — made up largely of JV players — was on the field.

“Me being a rookie head coach, I wasn’t thinking about it very well,” he said.

“They kicked an onside kick and they got it … easily. We ran our second-team defense back out there and they threw a bomb, first play, touchdown.”

Malik Davis’ 49-yard pass to a streaking Jesse Mountain, followed by the same pair hooking up on a two-point conversion, cut Chilhowie’s lead to 42-37.

This time, the coach sent his “hands team” on the field for the kickoff.

Chilhowie returned the ensuing kickoff to its 35-yard line with little hope.

Robinson was forced to dial up a trick play.

“We call it the ‘Apple Festival,’ and we work on it every Thursday,” he said.

“The guy who was supposed to throw it ended up keeping it to midfield. So I said, ‘Let’s run it again.’ This time we threw it underneath, then we got a late hit out of bounds to put the ball around the 20.”

There were nine seconds left, and Robinson wanted to run one more play.

He instructed quarterback Tyler Pierce to get rid of the ball if no receiver was open.

“I told my quarterback, ‘Do not scramble. If it’s not there, throw it out of the back of the end zone and we’ll run the field-goal team out there,’ ” Robinson said.

“Well he took off with it, all the way across the field. I’m looking at the clock thinking, ‘Oh my gosh, the time’s going to run out.’ He went out of bounds with point-five seconds left at the 5-yard line.”

The Bluefield Daily Telegraph referred to Chilhowie’s 45-43 win as “The Game that Time Forgot” as Tazewell’s sideline felt the Bulldogs got a slow clock.

“We felt like the clock already should have run out, thought it got stopped a little early when the guy got tackled,” said Shane Allen, who was a second-year coach for the Bulldogs in 2013 and is now the head coach at Galax.

“But it was a good game. Coach Robinson does a great job over there. It was a fun game to look back, but if you’re in it, it wasn’t too much fun.”

Could anything possibly top a game in which two teams combined for 55 fourth-quarter points with 25 of those coming in the final 1:06?

The next week, Tazewell overcame Rural Retreat 69-62 by converting seven consecutive two-point conversions, finishing the game in semi-darkness after a transformer blew.

Incredibly, the 2013 win over Tazewell might not be Chilhowie’s most improbable.

Robinson was an assistant coach under Larry Russell in 2011 when Chilhowie topped Rural Retreat 39-38 in a first-round playoff game after trailing 31-0 at halftime.

“I don’t know what Coach Russell’s speech was at halftime because I didn’t go in the locker room,” Robinson said. “I was actually looking for a ride back to Chilhowie.”

Robinson, who coached Chilhowie’s baseball team to a Group A Division 2 runner-up finish in 2012, referred to the comeback win in his history class this week.

“I was talking about the French and Indian War and how the French were winning the war at halftime,” he said. “It doesn’t matter what the halftime score is.”

Lord Botetourt junior Rhyann Jones has yet to pitch in a varsity game for the Cavaliers.

That hasn't stopped her from already making a commitment to Radford University.

Salem has played a whopping 44 different schools in playoff games, a number that is even more impressive considering the school wasn't built until 1977 and the Spartans didn't make the postseason until 1986.

So what are the 44 schools?

Chilhowie football coach Jeff Robinson, shown in 2017, dialed up a trick play on the game-winning drive.

Chilhowie football coach Jeff Robinson has been in charge of the Warriors’ program since 2013.