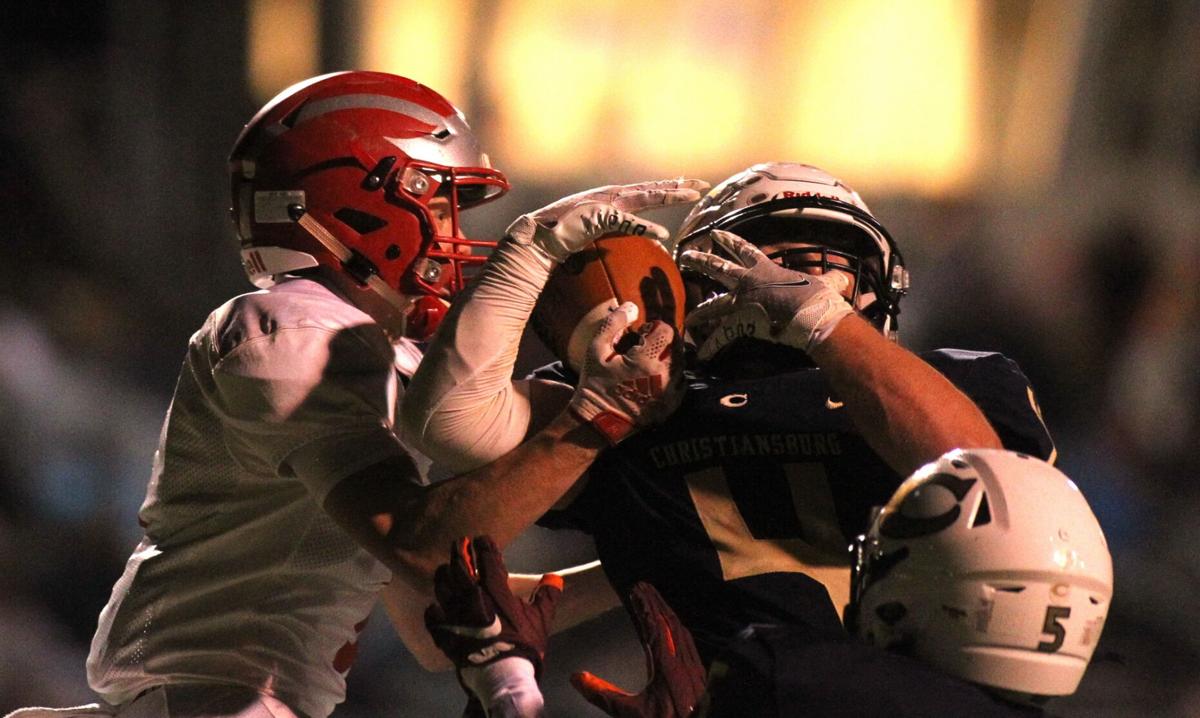 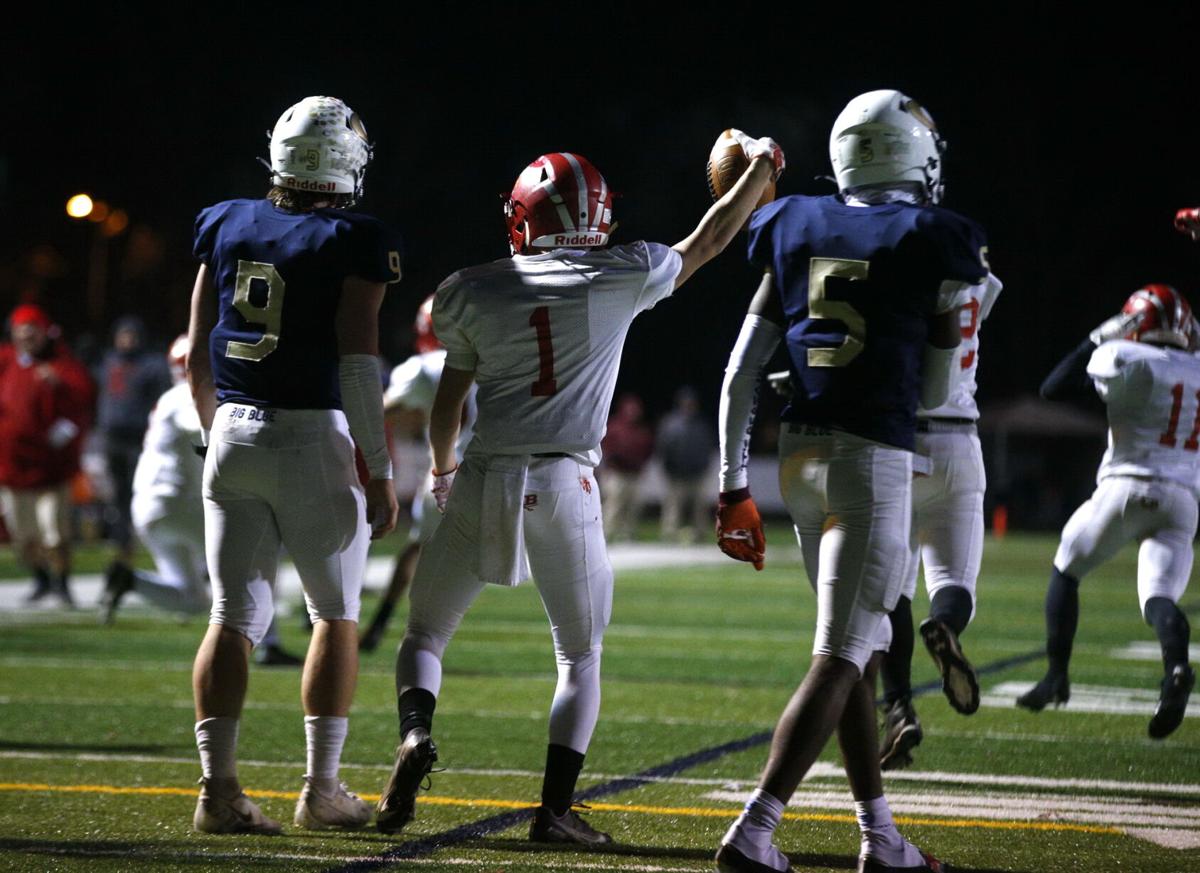 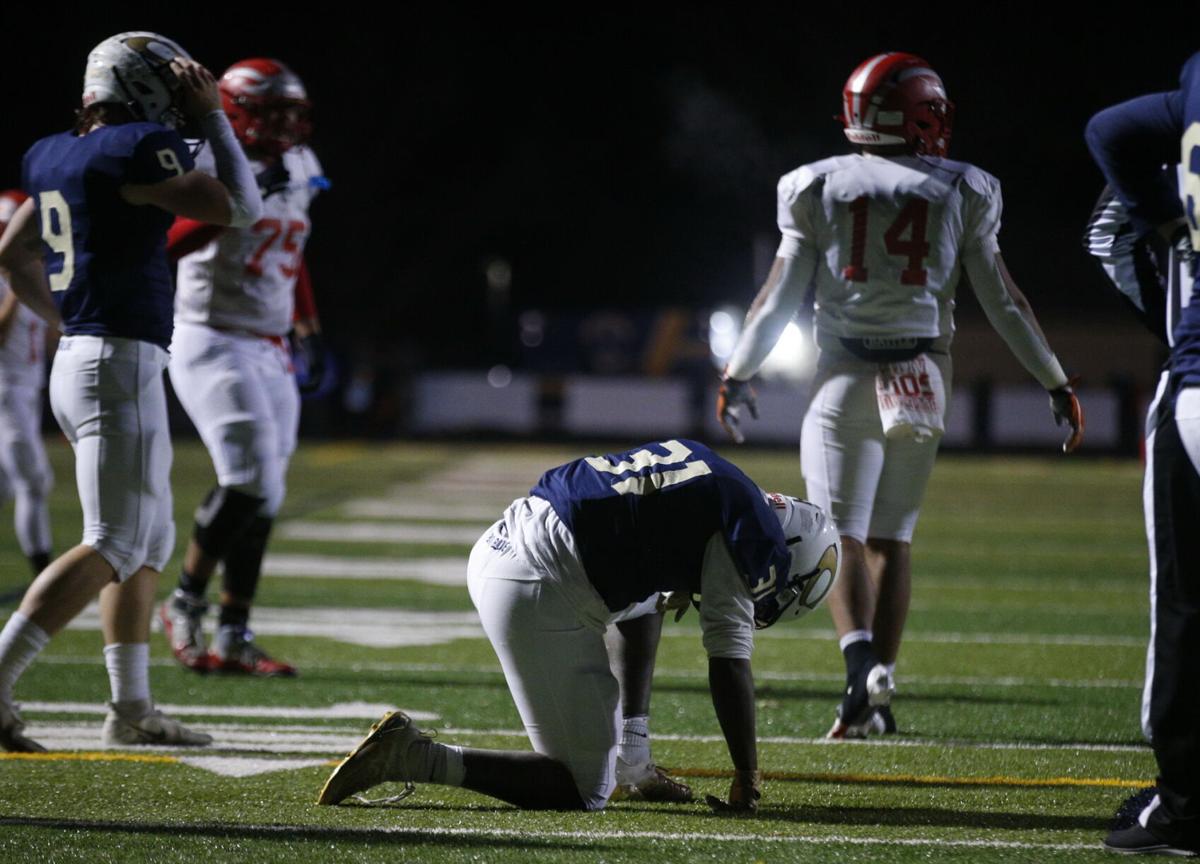 The pain of a playoff loss sets in for Christiansburg's Drew Lloyd (left) and Stephan Myrthil (center) after a 28-27 loss to Lord Botetourt.

CHRISTIANSBURG — A sliver, a hair, an eyelash.

That was the distance between success or failure on a late Christiansburg two-point conversion try against visiting Lord Botetourt in the Region 3D football semifinals Friday.

The attempt was called short by the officials and that turned out to be the difference in the Cavaliers 28-27 heart-stopper of a victory.

The Cavaliers (8-3) will play next week for the regional crown against Abingdon, which defeated Bassett. Top seed Christiansburg (10-2) faces a long winter’s recovery from heartbreak, assuming such is possible in the first place.

As it was, the Blue Demons still had 2 minutes 32 seconds left in the game to work with. A subsequent onside kick was recovered by Christiansburg, which had to wait a while as a dispute about the legality of the kick was litigated by Lord Botetourt coach Jamie Harless and the officiating crew. The officials ruled in Christiansburg’s favor.

Two snaps later, Demons coach Alex Wilkens called a brilliant halfback option pass that sophomore Tanner Evans delivered to the hands of wide-open Travis Altizer for a 43-yard completion. He was run down short of the goals line at the last instant to give his team a first and goal at the 5.

Incredibly, the next snap was a running play and subsequent fumble Joey Isaacs recovered for the Cavaliers.

“Forty-two [Dalton Oxley] knocked the ball out and I fell on it,” said Isaacs, who was a big play factory throughout a chilly evening on the Blue Demons field turf.

Lord Botetourt ran out the clock on the next three plays to end it.

“It was one of those games that came down to whoever ended with the most beneficial situation,” Harless said. “Obviously, we were lucky.”

Lucky to have Isaacs, too. In addition to recovering the decisive fumble, Isaacs picked off two Casey Graham passes. The first halted a potential scoring drive 10 yards short of the end zone, the second scuttled a Christiansburg drive at the LB 14.

The interceptions were Isaacs’ ninth and 10th of the season. But wait. Three takeaways weren’t the extent of Isaacs’ heroics against the Blue Demons.

He also caught a 30-yard scoring pass from quarterback Jakari Nicely, taking the football away from two leaping defenders and landing in the end zone to knot the contest 14-14 just before halftime.

Continuing a 14-point onslaught, Isaacs grabbed the second half kickoff, broke free and hot-footed to the left sideline and all the way down and across the goal line to put the Cavaliers ahead 21-14. The return covered 88 yards.

“Our goal is always to run it up the middle, so that’s what I did again.”

Harless pointed out that made four scoring kickoff returns for Isaacs this year added to two more last season. The coach suggested opponents should consider an alternate kickoff coverage strategy with regard to Isaacs.

Meanwhile, Christiansburg was geared to running the football and stopping the run defensively. The offensive tactic worked well with backs Myrthil (92 yards rushing) and Evans (91) leading a 208-yard attack.

Graham completed 7 of 13 passes for 144 yards and an interception as well as a 15-yard TD to Tyrique Taylor that made it 21-21 with 44 seconds left in the third quarter.

The Blue Demons were physical and effective defensively but still could not stop the tandem ground attack led by quarterback Nicely and running back K.J. Bratton II. Nicely finished with 123 yards and a touchdown on 31 carries.

Bratton averaged 6.6 yards a carry and contributed a dazzling 18-yard first quarter score in which he started to his right before completely reversing his field and sprinting into the open for the end zone.

Wilkens was quizzed later on his reasoning for going for the two-point conversion with still a couple of minutes to play.

“I felt like we could get them to jump offside,” he said. “When you play a good ballteam like that, you feel like you have to take some chances sometime. It just didn’t work out for us tonight.”

On the other side, Isaacs just had it working.

The pain of a playoff loss sets in for Christiansburg's Drew Lloyd (left) and Stephan Myrthil (center) after a 28-27 loss to Lord Botetourt.