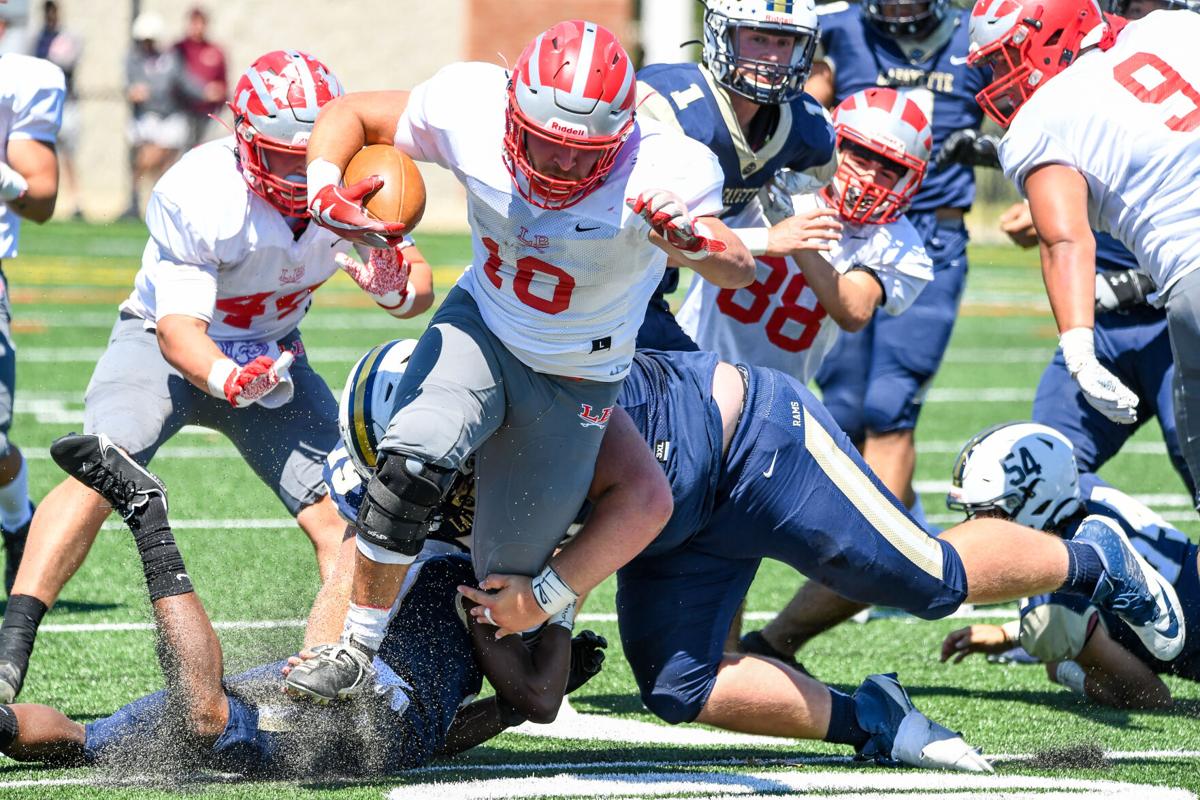 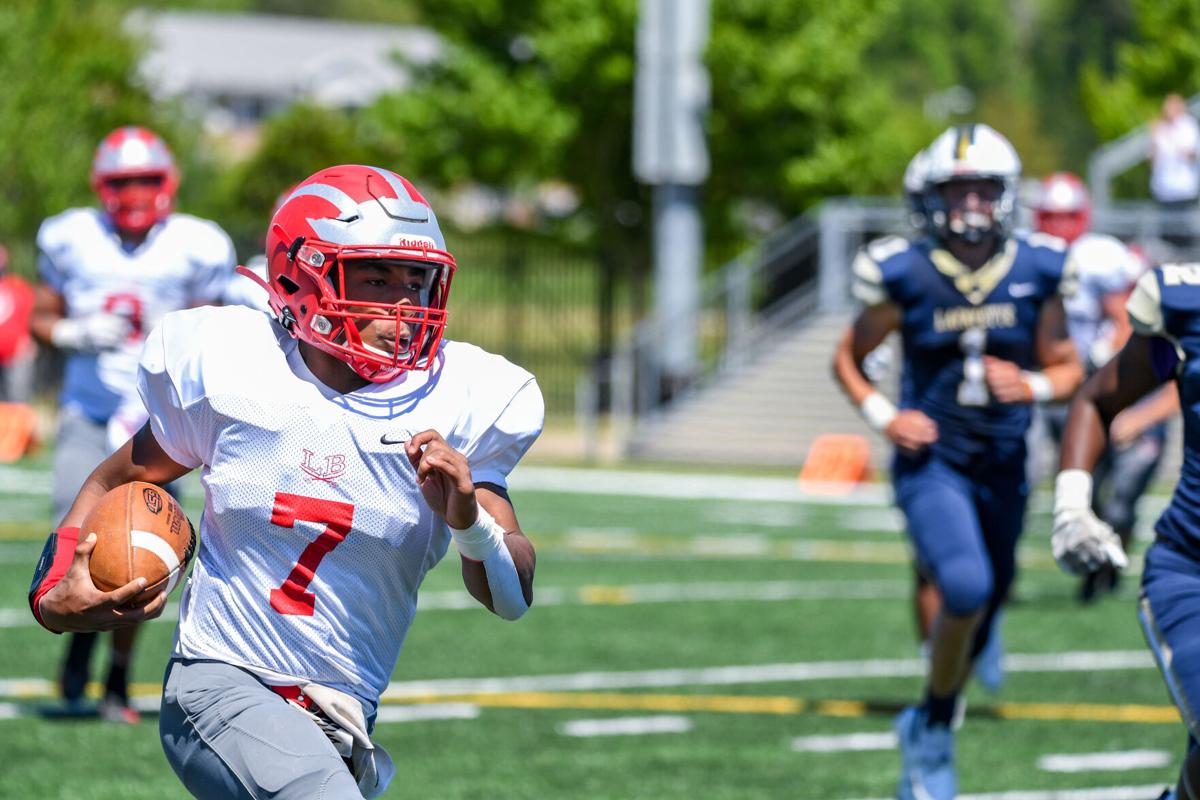 Lord Botetourt’s KJ Bratton breaks away for a big gain during the first half of Saturday’s Class 3 state championship game at Wanner Stadium near Williamsburg. 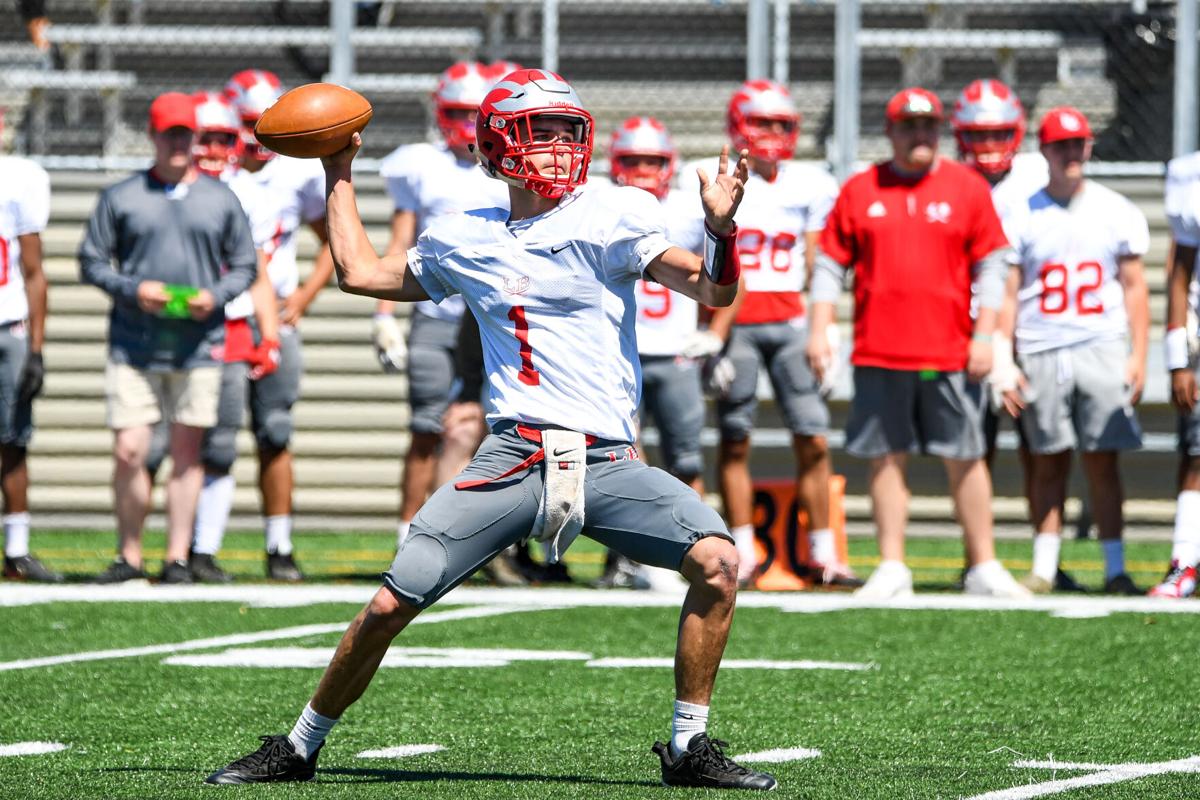 Lord Botetourt quarterback Sammy Peery throws a pass in the first half of Saturday’s Class 3 state championship game against Lafayette at Wanner Stadium near Williamsburg.

WILLIAMSBURG — One loose ball, lying on the artificial turf, waiting to be recovered.

Another football, snapped high and carried 40 yards for a touchdown on what his coach called the greatest play in school history.

Two big plays made in the fourth quarter by Lafayette.

And Lord Botetourt’s dreams of a first VHSL football championship were dashed.

Mike Green’s dazzling 40-yard run after a bad snap from center set up Carson Smith’s fumble recovery and capped a 17-point fourth quarter Saturday as Lafayette won the Class 3 title at Wanner Stadium with a 27-13 victory over the Cavaliers.

For the second straight year an undefeated Lord Botetourt team reached a state final only to come up one game short.

Botetourt (9-1) lined up shoulder to shoulder on the field and watched an opponent take the trophy that barely eluded their grasp.

And because of the VHSL’s altered postseason setup because of COVID-19, the Rams got to celebrate on their home field in James City County.

“After all the work we put in from July, all the lifting, and all the practices, just to go out like this, it hurts,” Botetourt senior lineman Troy Everett said.

Lafayette (9-0) declared its intention by forcing the Cavaliers to punt on their first three possessions.

Botetourt took a 7-0 second-quarter lead on a 1-yard run by Hunter Rice, but when Cannon Newell drilled a 40-yard field goal on the final play of the first half, the game was on.

With the help of a roughing-the-kicker penalty on the field goal and and a third-down pass interference call, Lafayette went up 10-7 on the first series of the second half on a 28-yard pass from Luke Hanson to Green.

Suddenly, Lord Botetourt trailed for the first time all season.

However, Botetourt never recovered from the 14 penalties for 141 yards that had coach Jamie Harless less than pleased during and after the game.

“If I was a certain group of people on this field today, I’d certainly be ashamed of myself,” the Botetourt coach said. “I will have this film reviewed, without a doubt.”

The Cavaliers still led 13-10 and had possession until Lafayette defensive back Bryce Cupp picked off a pass from Botetourt quarterback Sammy Peery and returned it to the 7.

Peery was picked off by Jaylin Pretlow at the Botetourt 9, setting up a 22-yard field goal by Newell for a 20-13 lead for the Rams.

“They were all one-person routes,” Peery said. “I was just trying to force the ball, trying to make something happen.”

Botetourt showed up in Williamsburg with limited weaponry.

Rice gutted out 102 yards rushing on a damaged knee, while big-play receiver Kyle Arnholt was out with an ACL tear.

“He’s an incredible player,” Peery said of Arnholt. “If the defense doesn’t have a deep threat to worry about, they can put more people in the box.

“In the second half, they were rushing more on the edge. It was messing up all the plays. We really couldn’t do too much about it.”

Lord Botetourt still had hopes, starting a possession at its 45 with four minutes to play.

Peery tossed a completion to Zach Horton on a bubble screen, but Cameron Orange was flagged for a blindside block.

It was Botetourt’s 13th penalty of the game.

“You get a good drive, then you’re always looking around for a flag,” Everett said. “It’s football though. It kind of happens. You’ve got to deal with it. Move on from it.”

On second-and-14, Rice fumbled on what proved to be the final carry of his brilliant four-year career. Carson Smith corralled Botetourt’s third of four second-half turnovers at the Cavaliers’ 43.

Botetourt needed a stop and appeared to get it when a fourth-down snap from center eluded Green, who had lined up in punt formation.

“After the ball snapped over my head and I caught it, it was already a defender too close so I said, ‘I got to run this,’” Green said.

Run the Virginia signee did.

Avoiding tacklers all over the field, he somehow went from one sideline to the other for a 40-yard score that iced the game

“It is absolutely the best play I’ve ever seen in Lafayette history, at least the history since I’ve been here,” said Lafayette coach Andy Linn, who was an assistant coach on the school’s 2001 Division 4 championship team.

Just like Hopewell’s TreVeyon Henderson in last year’s 35-7 victory over Botetourt in the final, Green was a difference maker.

“He’s a Division I athlete,” Harless said. “He’s got great balance, great athleticism. We had him wrapped up. A player like that does what they do when they get that opportunity.

“We did some things that put ourselves in a hole. All in all, we couldn’t make the mistakes that we made because of the circumstances that were occurring during the game.”

The loss was the third in a state final in six seasons for Lord Botetourt, which has won 43 games over the last four years.

“Would you like to win this game? Absolutely,” Harless said. “But these kids have been to this thing three times in six years.

“There’s a lot of schools that haven’t even won a region championship. Some of them have never won a district championship. I would not put any type of dark cloud over what these kids have accomplished.”

The last team to defeat Riverheads in a state football championship was Galax, in 2015. Saturday's rematch left the Augusta County school with another title.

The selection of a Timesland athlete as Virginia’s Gatorade Player of the Year in any sport is a rare event.

The quarterback switch from Chauncey Logan Jr. to DaRon Wilson was a major factor in Salem advancing to play at Lake Taylor on Saturday in Norfolk for the state Class 4 title.

Coaching a high school sport during the COVID-19 pandemic has been a tough job for anyone.

Galax football coach Shane Allen knows what to expect Saturday when the Maroon Tide plays at Riverheads in the VHSL Class 1 championship game.

When Stephen James resigned in May after six years as the head football coach at Pulaski County High School, he said he might take another job…

Lord Botetourt’s KJ Bratton breaks away for a big gain during the first half of Saturday’s Class 3 state championship game at Wanner Stadium near Williamsburg.

Lord Botetourt quarterback Sammy Peery throws a pass in the first half of Saturday’s Class 3 state championship game against Lafayette at Wanner Stadium near Williamsburg.