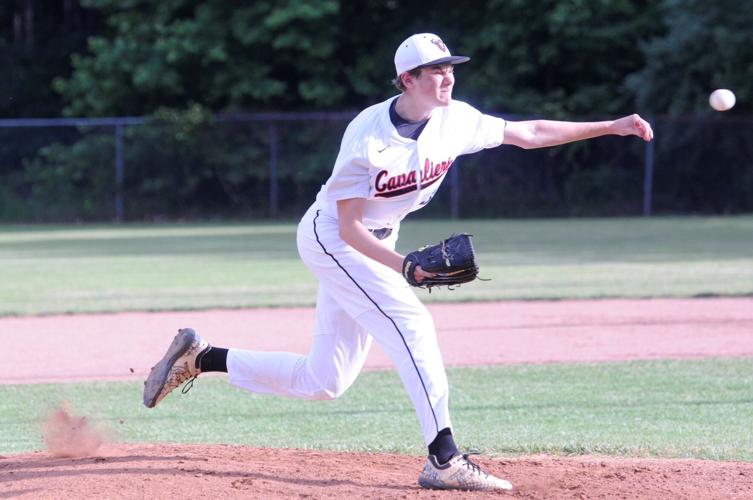 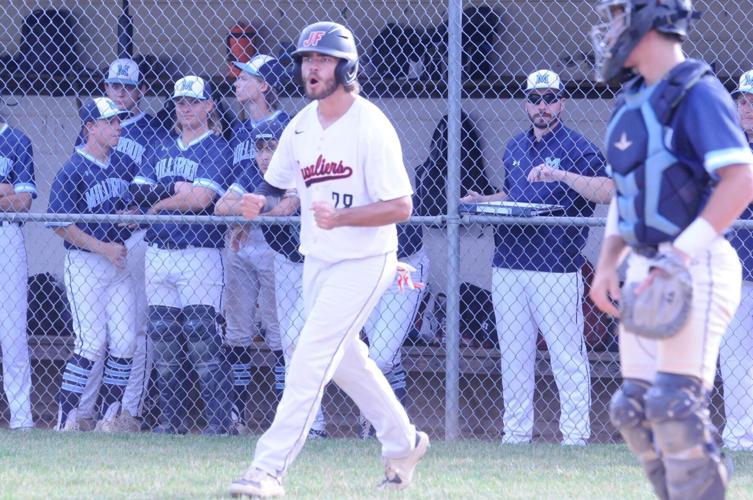 FOREST — Breckin Nace wasn’t expecting to take the mound Tuesday night. Not so early in the game, anyway.

But five pitches into the start of a state quarterfinal game against Winchester-based Millbrook, there he was, moving from first base to the hill.

Nace entered with one out in the first in place of starter Peyton Smith, who on Monday was named the Region 4D player of the year. On his fifth pitch, Smith sent a fastball humming through the zone and winced as the ball popped into Evan Mace’s glove. The southpaw grabbed at his right leg. Word came later that he had possibly pulled a hamstring.

“He wanted to keep pitching,” Nace said after the game. “He’s a warrior.”

But Forest coach Ryan Gilleland turned to Nace, another lefty, who had his curveball working especially well.

“I don’t think I’ve ever had to take a player out that early,” Gilleland said of Smith. “My heart breaks for that kid, for sure. But I told him, ‘Peyton you’re a champion.’”

Nace allowed just six hits, walked two and was only relieved when he allowed two runners to reach with two outs in the top of the seventh. Luke Gouldthorpe, who has served as JF’s closer this season, got the final out.

Nace received plenty of support in the bottom of the second inning, when the Forest bats broke out to the tune of seven runs.

Brock Harris got things started with a one-out single to center, and Sam Bell followed with a single to left. Millbrook starter Jerrod Jenkins walked Alex Whitaker to load the bases, and Nate Pyle’s infield single made it 1-0. With two outs and the bases loaded again, Mace delivered a two-run single to right. JF loaded the bases once more on a walk, and Landon Mitchell then blasted a two-run double to left for a 7-0 lead.

Bell led JF at the plate, going 3 for 3 with a double and two runs scored.

“I felt like I was prepared,” Bell said. “Coach [Zach] Duff has helped me with my mental game, so I’m prepared for fast pitching, curveballs, anything. And I think we just as a team had a really good night at the plate.”

Forest (21-4) hit the ball hard all night and finished with 10 hits. JF did most of its damage off Jenkins, a 6-foot-4 right-hander who signed with Division I Dallas Baptist late last year. On Tuesday, he allowed eight runs (all earned) on seven hits in a two-inning effort.

Forest has put together a strong postseason, reeling off four victories and earning the Region 4D title. Friday’s semifinal, at Riverbend High School in Fredericksburg, pits the Cavaliers against Region B champion Hanover, which defeated Warhill 10-0 in another Class 4 quarterfinal on Tuesday. Hanover (21-2) features numerous Division I recruits who are headed to the likes of Boston College, N.C. State, VMI, Old Dominion and Mount St. Mary’s. The Richmond Times-Dispatch reported recently that the pitching staff has only allowed five or more runs four times this season.

“They know what’s ahead of them,” Gilleland said of his club. And, he added, “if we can swing it like that we’ll have a chance.”

Forest is attempting to reach the state title game for the first time since 2015. It’s been 24 years since the program’s state title, which occurred in 1988.

“Our program’s built on winning championships in the past,” Gilleland said. “Whether it’s district championships, region championships, and obviously going back to 1998 winning the state championship. So we work really hard to get in these situations, and the kids have followed through for us.”

In the region: Glenvar's Wilkes wins at New Balance Nationals

In the region: Glenvar's Drew named Class 2 girls soccer coach of the year

Glenvar coach Kyleigh Drew has been named the VHSL Class 2 girls soccer coach of the year, the league announced Thursday.

Anderson: For every sport, and for sports writing, there is a season

Scholar-athletes from 20 Timesland-area schools will be honored Monday.

In the aftermath, euphoric teammates hit her so hard that she lost her contact lenses, but Jordin Crouch didn’t need 20/20 vision to see what …

SALEM — Auburn’s third straight Class 1 title was never in doubt on Saturday afternoon at the Moyer Sports Complex in Salem.

The Maroon Tide shut out Northampton.

Saturday marked Eastern Montgomery's 32nd consecutive win and it was a dominating performance to take a state championship.