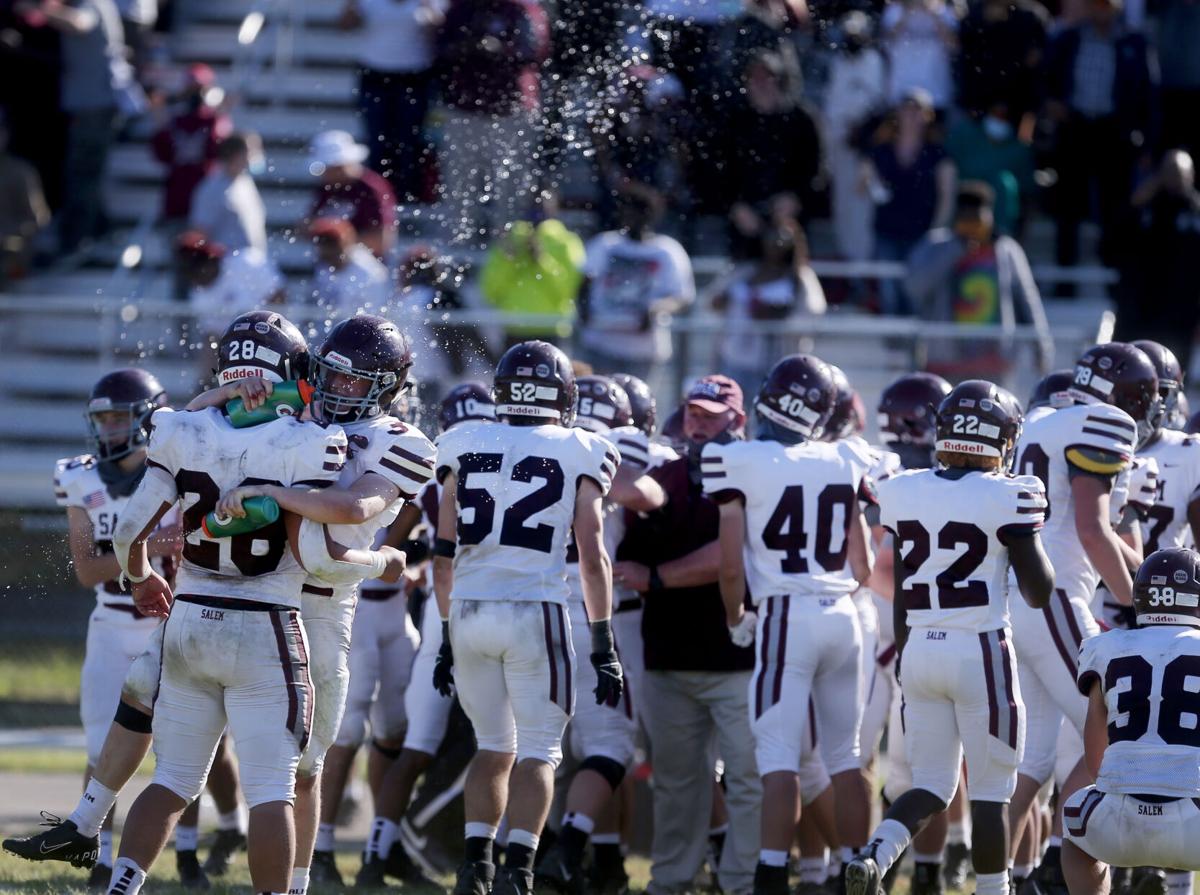 Salem celebrates after beating Lake Taylor 28-20 in the Class 4 state championship game on Saturday in Norfolk. 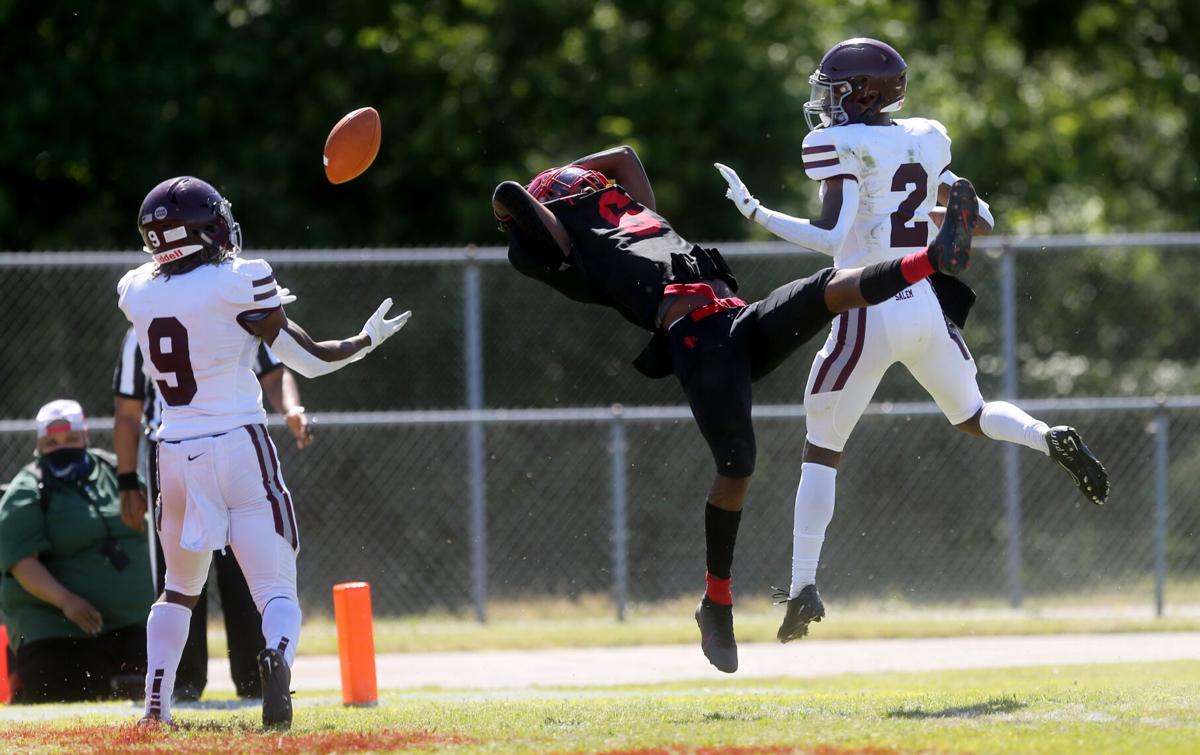 NORFOLK — The first of May has long been a day set aside for the celebration of the international labor movement.

Back here in the United States, Salem High’s football players may be celebrated for their own devotion to hard work.

That resolve was one of the primary reasons the Spartans rallied for a huge second half and outlasted rugged host Lake Taylor 28-20 on a perfect spring Saturday for the Class 4 state championship.

The Spartans (10-0) won their 10th championship after a tough game between teams that have participated in the last six title games in the classification. Salem stands 2-1 against the Titans (8-1) during the era.

Salem spotted the Titans a two field goal lead at the half then roared back with four second-half TDs, three of them from power running plays to tailback Zavione Wood.

Lake Taylor, the defending champion, seemed to lose some zip as the game went on, but never gave up and scored two fourth-quarter TDs in a determined but vain attempt to recover from a 28-12 deficit.

It was a melancholy farewell for the Titans in the classification as the school drops to Class 3 status in the fall season to come.

“We talk about it every week, every single day — it’s focus and discipline that allows you to execute all three phases of the game,” said Salem coach Don Holter, who won his first crown as a head coach after years as an assistant. “My guys did that today.”

The results spoke for themselves.

“They got after Lake Taylor today and it showed,” Holter said.

Salem had equal measures of resolve and patience after the Titans dominated the first half, especially defensively. By intermission, the blank-firing Spartans had earned all of one first down, 27 rushing yards, and no completed passes.

“Absolutely huge,” Holter said. “The defense stepped up big on the short field. That’s the difference in the ballgame.”

Salem is an I-formation team that throws only when necessary. Such an occasion was after halftime. A 16-yard second down completion to Chauncey Logan Jr. was sophomore quarterback DaRon Wilson’s first connection and it came on the team’s first possession of the third quarter.

Logan’s catch set the stage for Wood’s first score, a 56-yarder through a big hole. With the first of four Wesley Cross conversion kicks, Salem had its initial lead at 7-6. Lake Taylor answered almost at once with a 21-yard strike from Foster, also the quarterback, to a leaping Darious Speight.

Foster had a big game aloft, completing 16 of 24 passes for 250 yards, two TDs and a two-pointer along with an interception. The second score was to Camauri Hunter, who led all receivers with six catches for 126 yards.

Next up for hero duty for Salem were Wood and his blockers up front. Wood did his part with two more scores, a 34-yarder and one from 49 yards out. The second of those gave Salem the margin it would need to hold on.

“Our line made adjustments after the first half and it worked and we went with it,” said Wood, who finished with 181 yards on 16 carries. “We had to pick the middle linebacker up blitzing and once we did that, we were rolling from there.”

As well as Salem ran the football, its defense made the Titans struggle with their veer-option attack. The Spartans held Lake Taylor to 68 yards on the ground, forcing the Titans to rely almost entirely on their passing game.

“One of the biggest things was shutting down the run,” Salem nose tackle Cameron Martindale said. “The second big takeaway from watching film was trying to break them down both physically and mentally.

“We started seeing that halfway through the third quarter. At that point, it was just an avalanche effect.”

NFL Futures: Sleepers In the West

NFL Futures: Sleepers In the West

There have been many, many occasions when discretion and fear of a phone call judgment kept a postgame comment from a coach out of print.

Everybody in Salem knows what a championship high school football team looks like. Most would agree at this point Salem’s Spartans are more an…

On an afternoon where offense was at a premium and defense was porous, Roanoke's Patrick Henry High made one last stop to seal the game.

For the first time since Gainer Field at Patriots Stadium was constructed in 2007, the PH football team took a hard left off the home sideline at halftime Friday and jogged a few yards into its brand new field house behind the east end zone.

RADFORD — When the game went into overtime on Friday night, Galax’s Ian Ashworth decided to take matters into his own hands.

On an evening when a bat fluttered over the football field and briefly held up play, it stands to reason that it would be a good night for the…

HS VOLLEYBALL ROUNDUP: Christiansburg tops Botetourt in 5 to improve to 6-1

CHRISTIANSBURG — Braelyn Williams and Baylee Reasor had 11 kills apiece as Christiansburg claimed the final two sets Monday night for a 20-25,…

Rockbridge County has hired former assistant Robert Winfield as its new boys basketball coach. He replaces Mike Gale, who coached the Wildcats for one season before leaving to become the girls basketball coach at Fort Defiance.

Salem celebrates after beating Lake Taylor 28-20 in the Class 4 state championship game on Saturday in Norfolk.