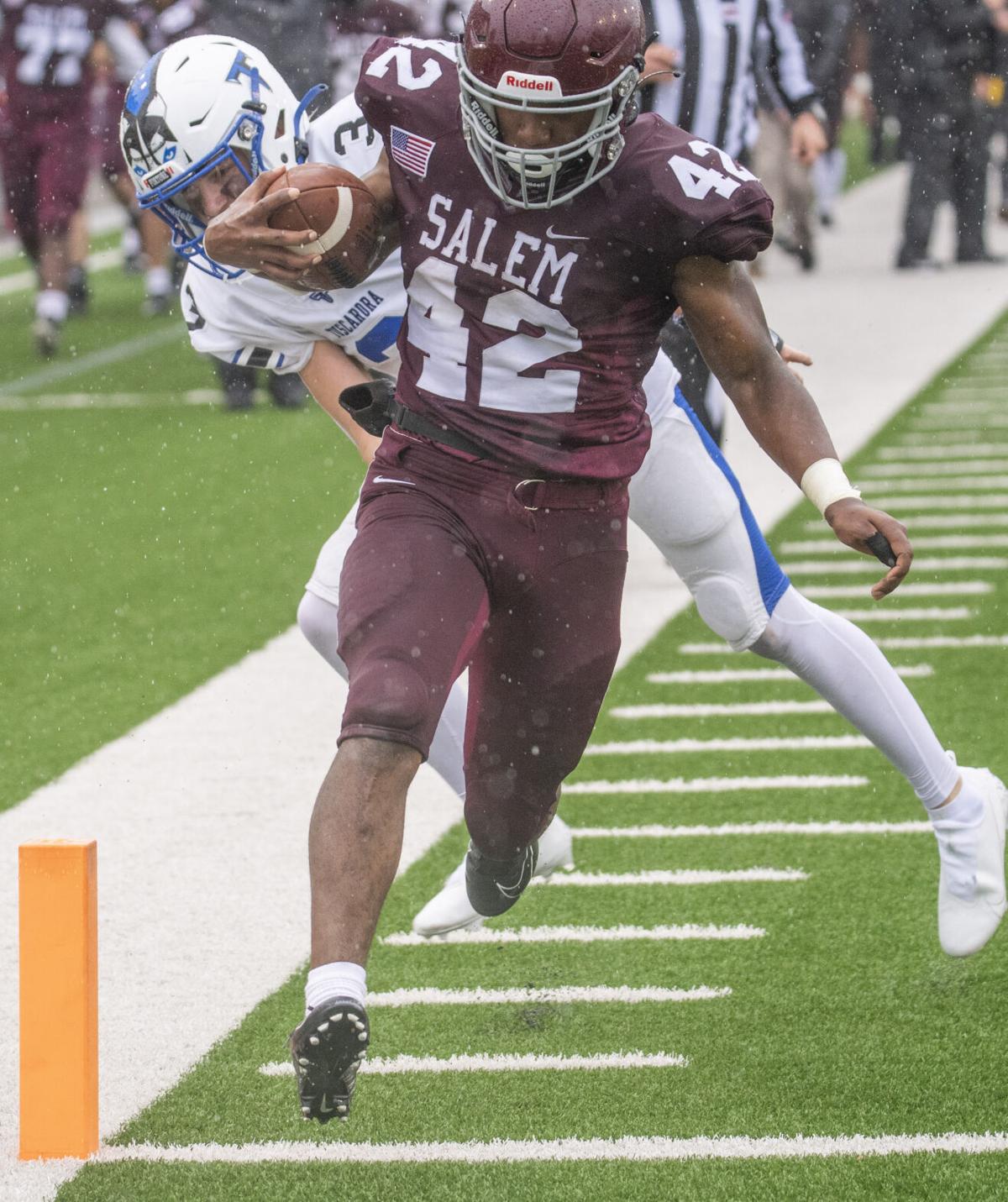 Salem running back Zavione Wood stays in bounds to score against Tuscarora in a Class 4 state semifinal football game at Salem City Stadium on Saturday afternoon. 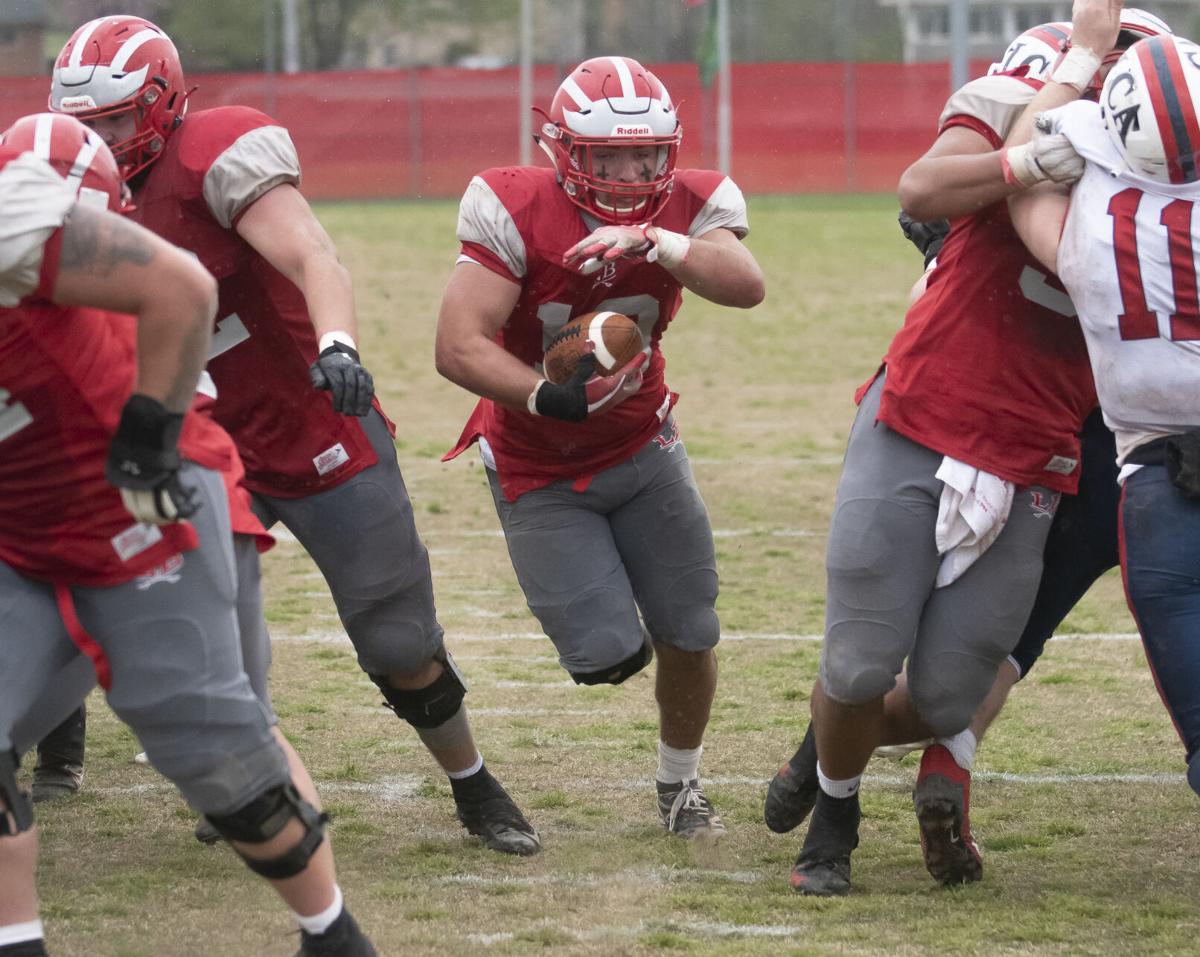 Lord Botetourt running back Hunter Rice finds a hole in the line and scores the Cavaliers' first touchdown of the Class 3 state semifinal against Liberty Christian on Saturday.

A video replay of Salem’s 17-14 double-overtime victory over Lake Taylor in the 2015 VHSL Class 4 football final hit the big screen last summer at Haley Toyota Field, the home of the Salem Red Sox.

Now the real thing is here.

Salem and Lake Taylor will meet in the Class 4 final Saturday, this time in Norfolk and likely at the Titans’ on-campus facility.

The Spartans have split two games with Lake Taylor both in state finals. The Titans rolled 41-16 in the 2014 championship game at Liberty University, and Salem rebounded with the double-OT thriller the following year in Lynchburg.

Lake Taylor is the reigning Class 4 champ. The Titans hammered Tuscarora 34-14 in the 2019 championship game.

Salem and Lake Taylor have combined to win five of the last six Class 4 championships.

Next year, Lake Taylor will be someone else’s problem as the Titans are dropping to Class 3.

Of the 12 teams competing for a championship this weekend, all but one has an unblemished record.

Six-game regular-season schedules caused by the VHSL’s response to the COVID-19 pandemic might be part of the reason, but four of the teams — South County, Highland Springs, Lord Botetourt and Riverheads — were unbeaten in the 2019 regular season.

No fooling. Stuarts Draft’s 10-7 overtime loss to Riverheads on April 1 is the only blemish on any of the finalists’ record.

If Appomattox County defeats Stuarts Draft in the Class 2 final, this season would be the first time since the VHSL adopted six classifications for football in 1986 that all six state champions finish unbeaten.

While the VHSL’s six-classification system has given more schools an opportunity to compete for a state title, it also has created a scenario where there are repeat champions in multiple sports including football.

Riverheads can break a VHSL record with a fifth consecutive football title if the Gladiators defeat Galax.

It will be the third meeting in the finals between the two teams in the last six years.

Riverheads, located just southwest of Staunton, has an 86-6 record under coach Robert Casto in the last seven seasons. The Gladiators have won 35 consecutive games. Phoebus holds the VHSL record with 45 in a row from 2008-12.

Riverheads is the only Class 1 team in the Shenandoah District. The 2015 loss to Galax is the program’s only loss to a Class 1 opponent since 2009, when the Gladiators fell to Altavista in the playoffs.

Lord Botetourt is in the Class 3 final for the second year in a row and the third time in the last six seasons.

Galax is playing in a state final for the fourth time since 2011.

Appomattox County is looking for its fifth Class 2 title in the last six seasons.

Highland Springs has won four of the past five Class 5 championships. Stone Bridge is making its third consecutive appearance in the championship game and its 10th since the school opened in 2000.

Saturday’s championship game will be played at Wanner Stadium in James City County, an artificial-turf facility that Lafayette shares with two other Williamsburg-area schools — Warhill and Jamestown.

Lafayette defeated Pulaski County 41-28 in the 2001 Division 4 final and lost to Heritage in the championship game the following year under head coach Paul Wheeler.

Previously, Lafayette was known as the team Patrick Henry defeated 23-0 in the 1973 Group AAA championship game.

It is also the alma mater of Pro Football Hall of Fame linebacker Lawrence Taylor.

Why is there still so much doubt surrounding the Atlanta Hawks?

What does Joel Emiid's offseason look like following his knee injury?

What does Joel Emiid's offseason look like following his knee injury?

What are some ways the game of golf can grow?

What are some ways the game of golf can grow?

Syrian boxer competes 'for all refugees' at Olympics

Syrian boxer competes 'for all refugees' at Olympics

A blood clot caused a stroke when Landon Dinkel was a 16-year-old sophomore. He persisted, recovered and returned to running.

Scholar-athletes were nominated from 18 Timesland-area schools to be considered for the B'nai B'rith Athletic Achievement Award. The two winners will be announced Monday night.

William Byrd exited the fourth inning tied at 2, and the Terriers unloaded eight more runs in the fifth against four Cave Spring pitchers who combined for 11 walks and two hit batters in a 12-2 win.

One minute is all it took for Blacksburg to break Jefferson Forest’s unscored-upon streak that lasted throughout the 2021 season.

Down 1-0 in the sixth inning, Auburn rallied for six runs to defeat Grayson County.

FLOYD — Practice made perfect for Floyd County when it mattered most on Tuesday afternoon.

Salem running back Zavione Wood stays in bounds to score against Tuscarora in a Class 4 state semifinal football game at Salem City Stadium on Saturday afternoon.

Lord Botetourt running back Hunter Rice finds a hole in the line and scores the Cavaliers' first touchdown of the Class 3 state semifinal against Liberty Christian on Saturday.