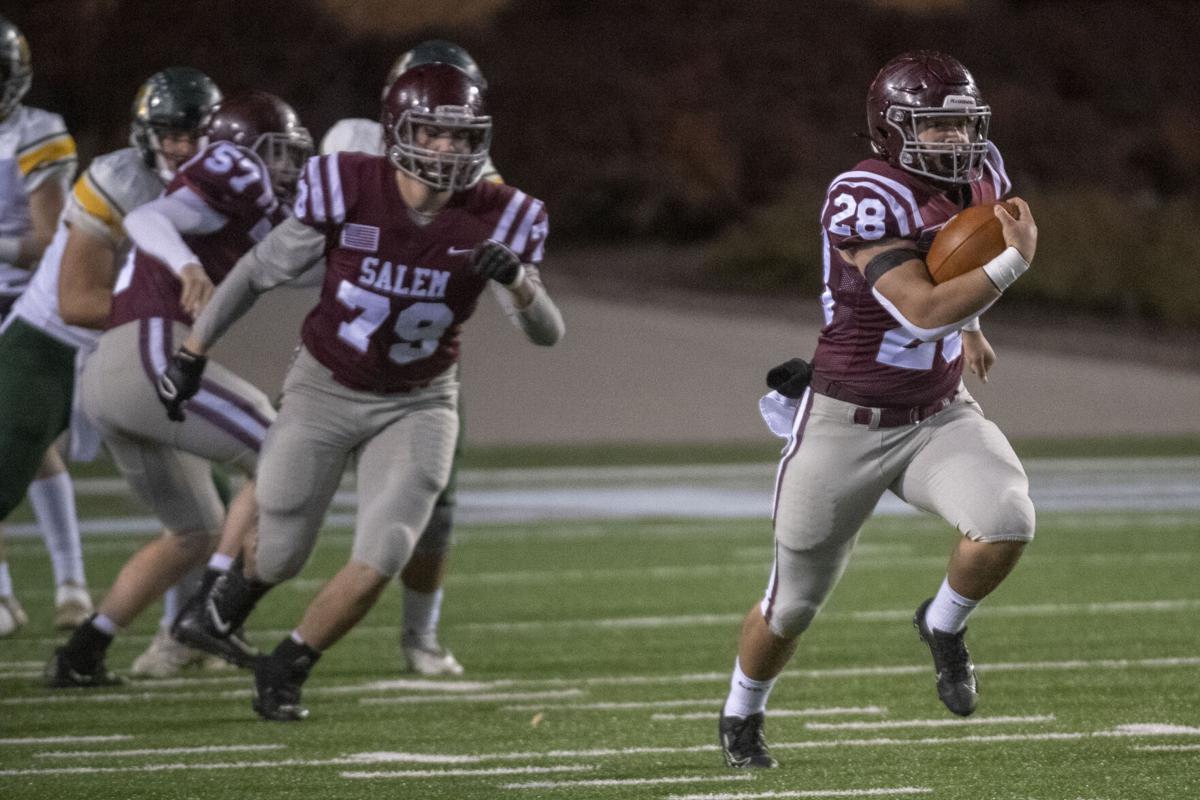 Salem running back Cam Leftwich (right) breaks away for an 87 yard touchdown run on Salem’s first offensive play of the game against Louisa County during a VHSL 4D semifinal playoff game Friday night at Salem Stadium. 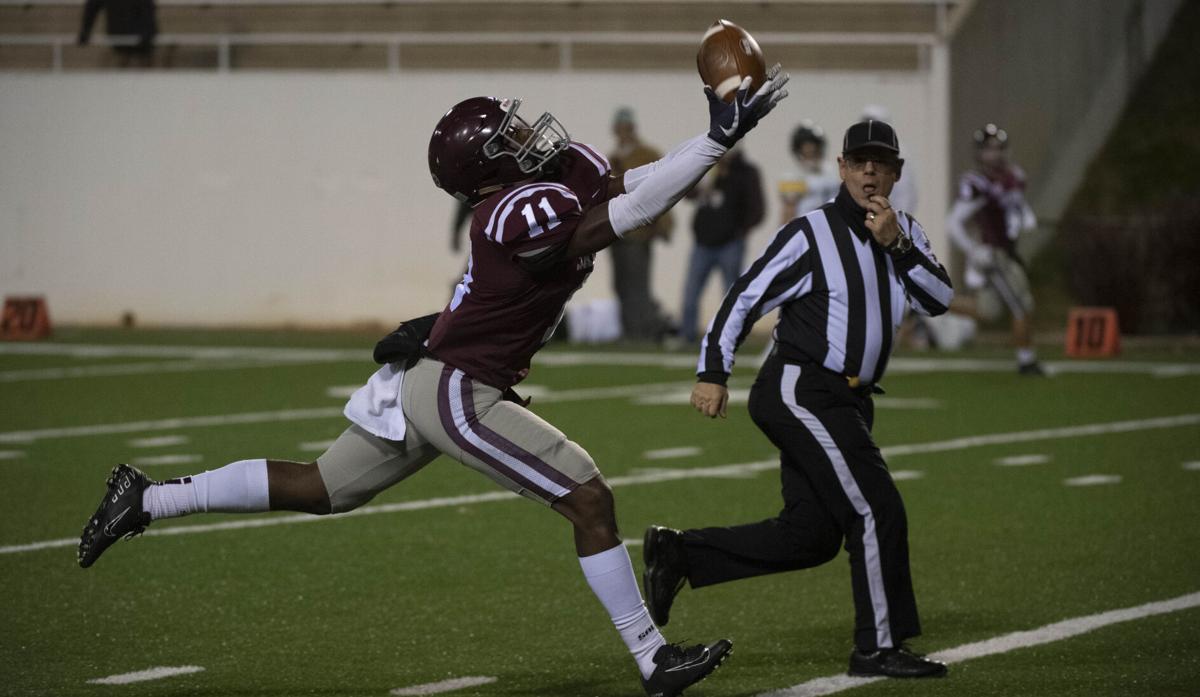 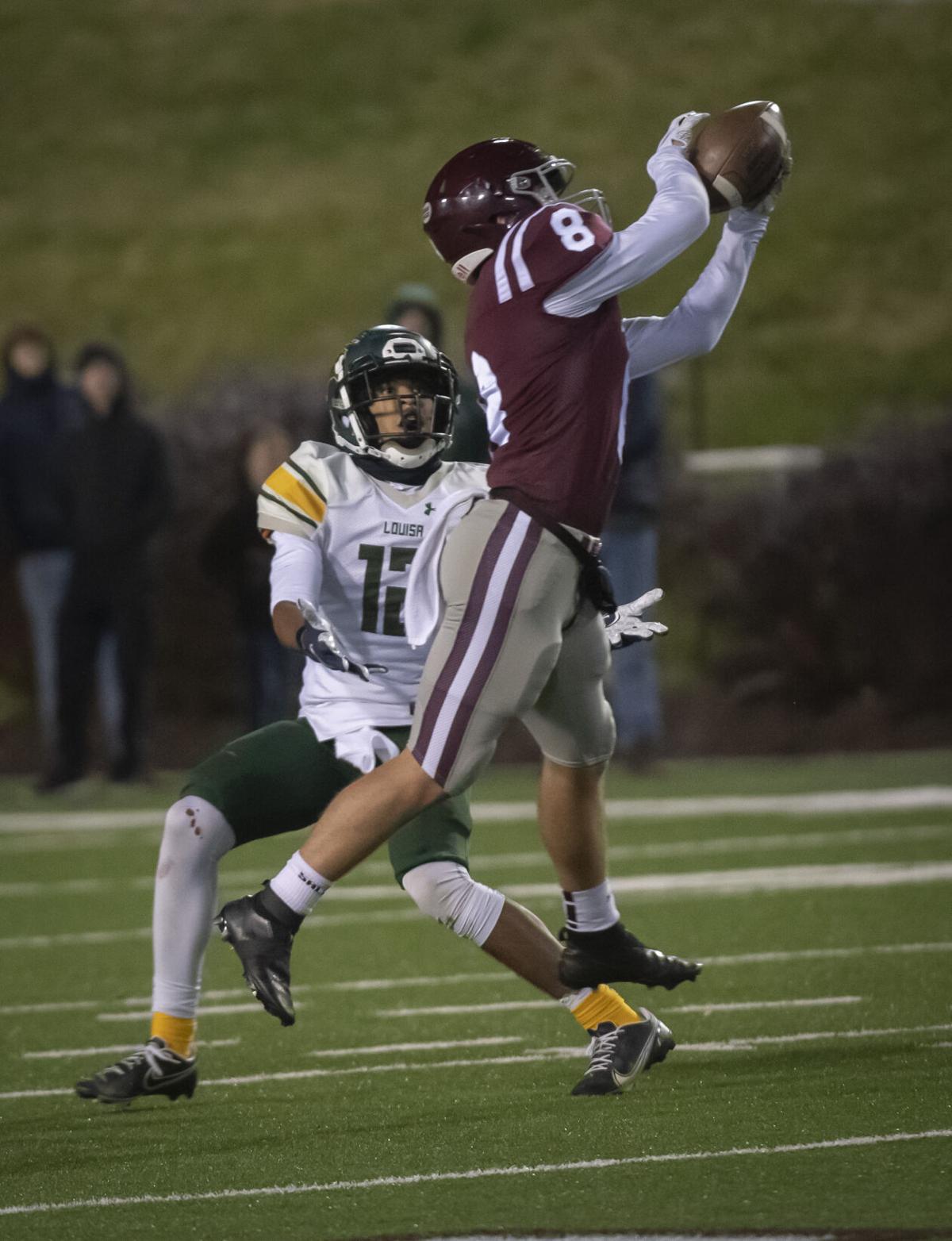 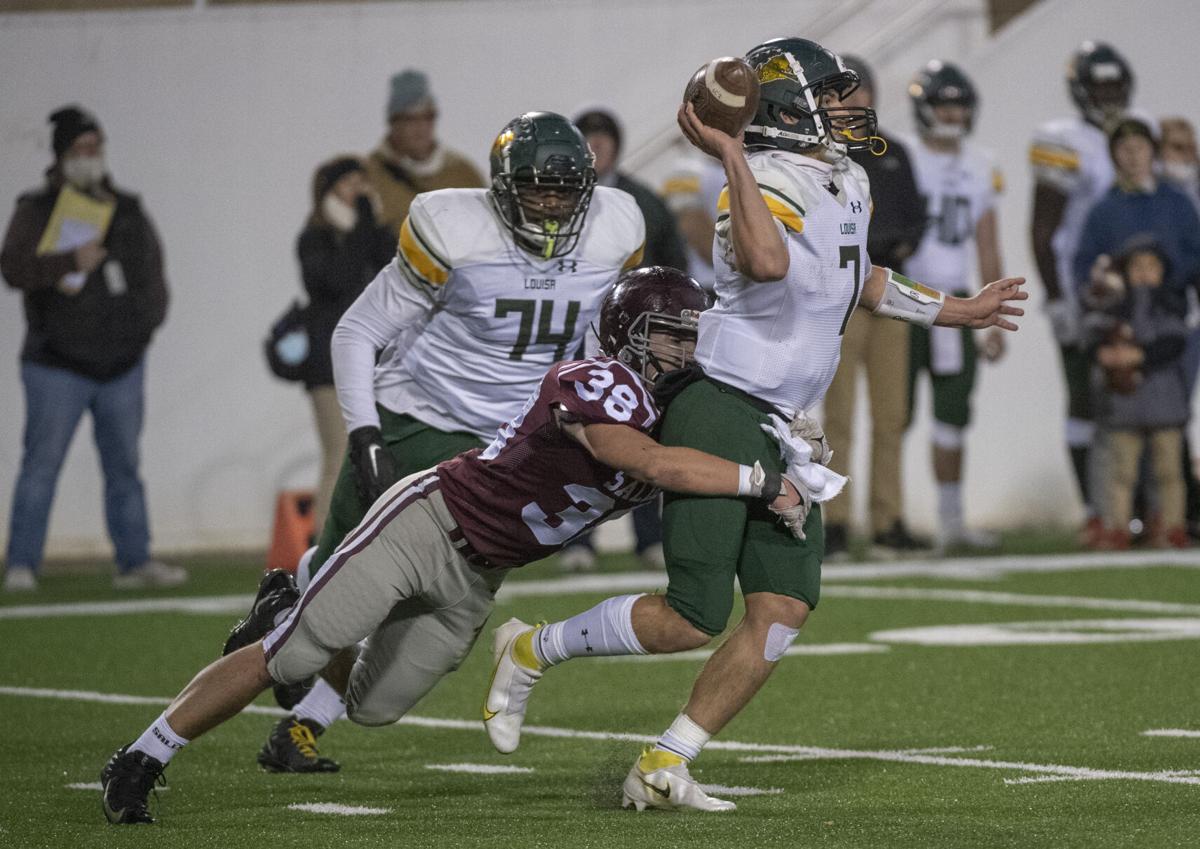 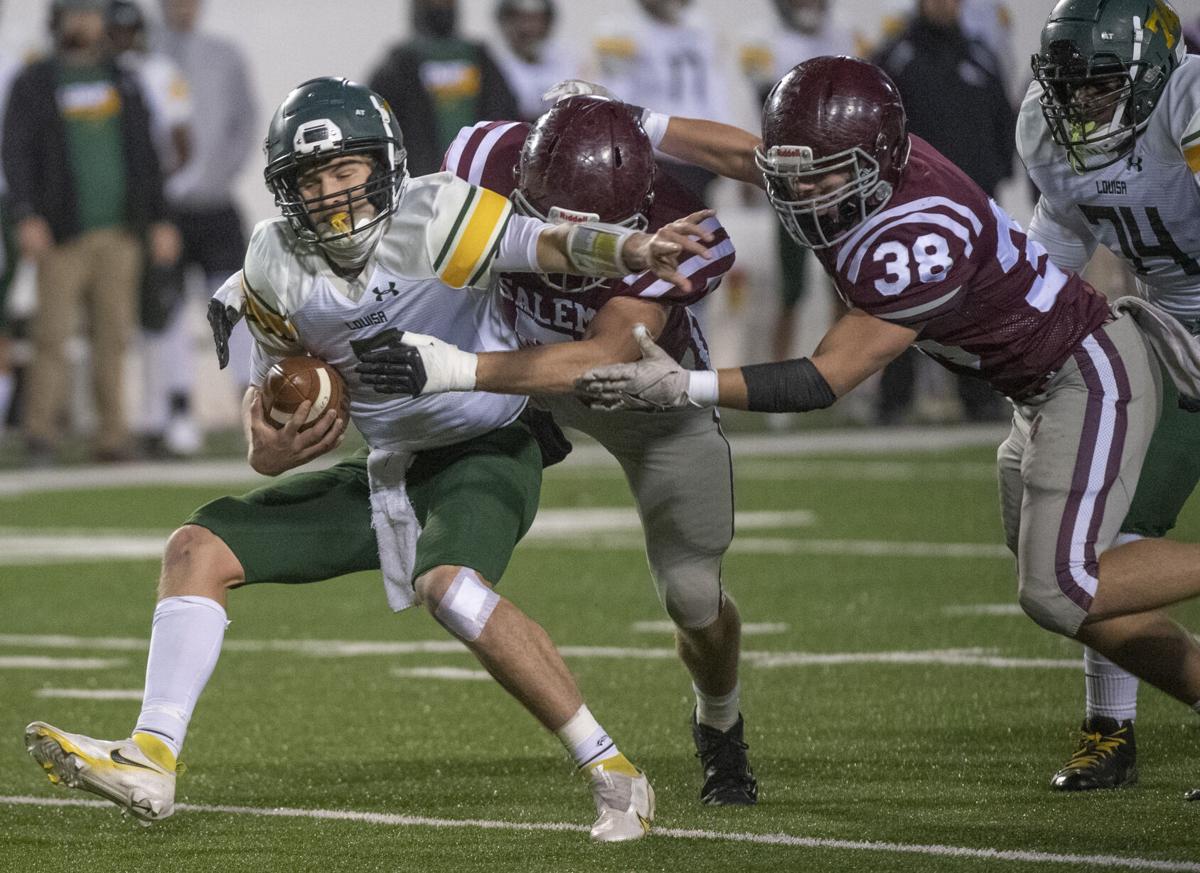 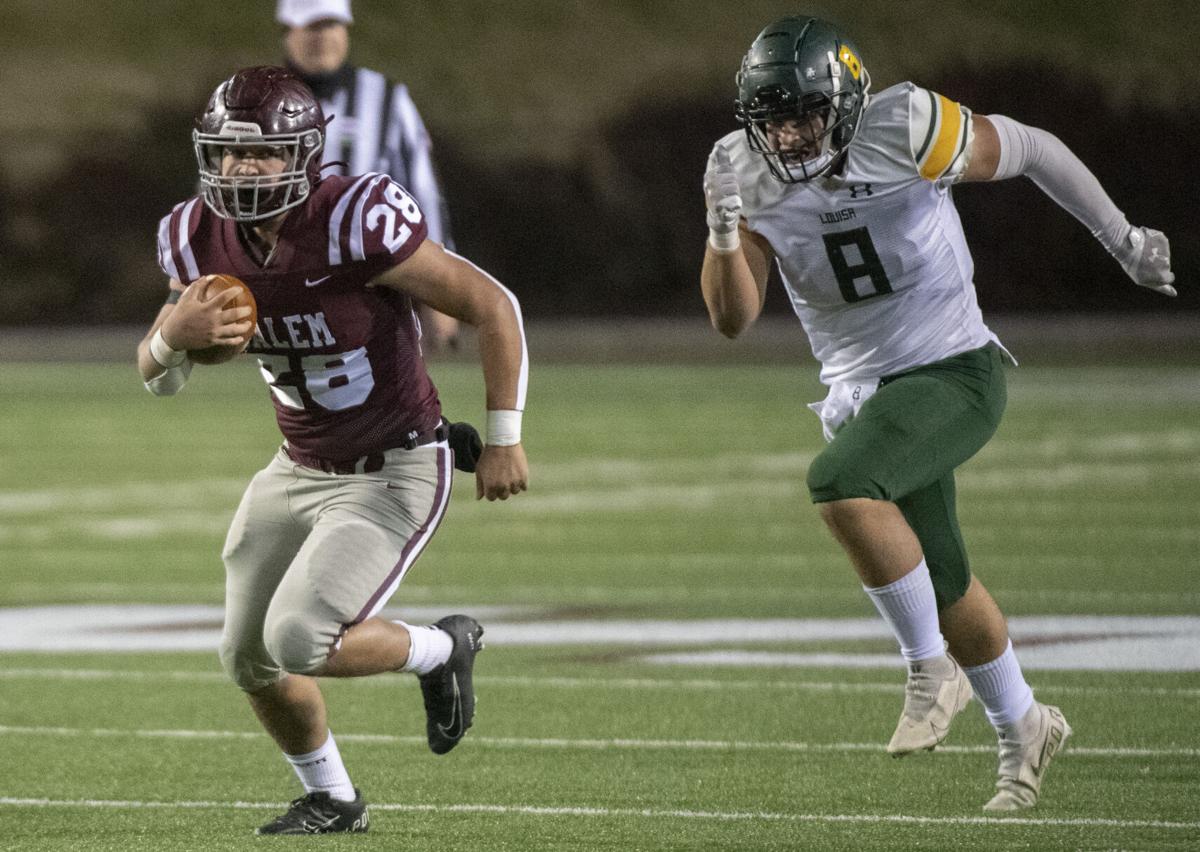 Salem’s Cam Leftwich breaks away for a touchdown against against Louisa County’s Jacob Bundrick during a VHSL 4D Semi-final playoff game Friday night at Salem Stadium.

Who says lightning doesn’t strike twice in one place?

Salem scored touchdowns on its first two plays from scrimmage Friday night and added a third one-play drive later in the first half as the Spartans rolled to a 55-7 victory over Louisa in a Region 4D football semifinal at Salem Stadium.

Cam Leftwich bolted 87 yards to the house on a fullback trap on Salem’s first snap from scrimmage.

Before the rubber pellets settled back into the artificial turf field, DaRon Wilson hit Chauncey Logan for a 37-yard TD pass for a 14-0 lead and the Spartans were off and running toward a region final next week at home against George Washington.

“We can play way better,” Leftwich said. “That’s not our best game. We’ve got more to come.”

Wilson and Logan hooked up for two scoring passes as Salem (11-1) averaged nearly 10 yards per play for the game.

“That comes with preparation,” Salem coach Don Holter said. “I tell our team all the time there’s no such thing as luck. Luck’s entertainment.”

Interior linemen Stacy Williams and Cameron Martindale, end Nathaniel McCluer, and linebackers Noah Collins and Jaelyn Allen were among the headhunters, while Chase Greer and Logan had interceptions.

“We took over up front,” Martindale said. “We’re the first defensive line that have been able to challenge some of their better O-linemen.

“They have some ‘dogs’ that can play, but I don’t think they were ready for us to smash them in the mouth.”

“Their defensive line is outstanding and their linebackers are outstanding,” Patrick said. “Their team speed … they flow around. They really took away a lot of things we were trying to get going there.”

Wilson’s 6-yard pass to Leftwich on the first play of the second quarter produced a 21-0 lead.

Salem wasted no time on its next possession.

Leftwich again blasted up the middle on a trap play for a 38-yard TD on the first play and with 9:28 left in the second quarter it was Salem 28, Louisa County 0.

One of three new teams in Region 4D, the Lions responded with a 74-yard drive and 12-yard TD run by Landon Wilson, who finished with 87 hard-earned yards on 25 quarterback keepers.

Any thought of a comeback vanished with 16 seconds left in the half when DaRon Wilson found Logan for a 15-yard TD pass and a 35-7 halftime lead.

Logan against one-on-one coverage in the red zone?

With the outcome no longer in doubt, Leftwich added TD runs of 38 and 1 yards in the third quarter, and Salem closed with Barlow’s 1-yard run.

It was a tough night for Louisa, which had trouble fielding kickoffs throughout the game, resulting in an averaging starting field position of its own 20-yard line.

“We just never really had a chance to get the offense going,” Patrick said. “Hats off to Salem’s defense and their offense. [Leftwich] is a really, really good fullback. [Logan] is a heck of a high school football player.”

“I’m really proud of my boys. We lost a lot of seniors last year. This team, we didn’t know what to expect going into the season in July. We had a lot of holes to fill. Finishing 9-3, getting a share of that district title, beating E.C. Glass last week and then coming down here to a storied place of high school football … we learned a lot tonight.”

Salem running back Cam Leftwich (right) breaks away for an 87 yard touchdown run on Salem’s first offensive play of the game against Louisa County during a VHSL 4D semifinal playoff game Friday night at Salem Stadium.

Salem’s Cam Leftwich breaks away for a touchdown against against Louisa County’s Jacob Bundrick during a VHSL 4D Semi-final playoff game Friday night at Salem Stadium.