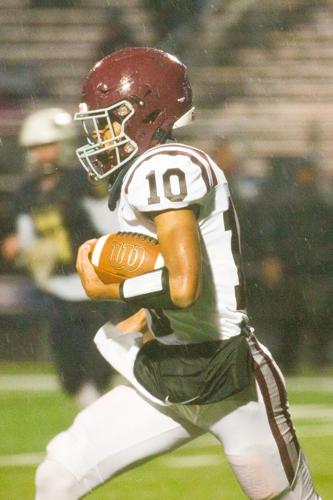 Salem’s DaRon Wilson runs the ball against Christiansburg in the second quarter on Friday night. 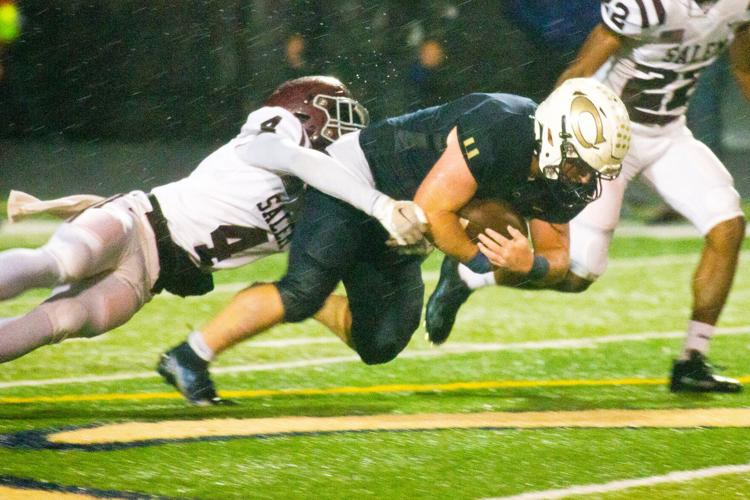 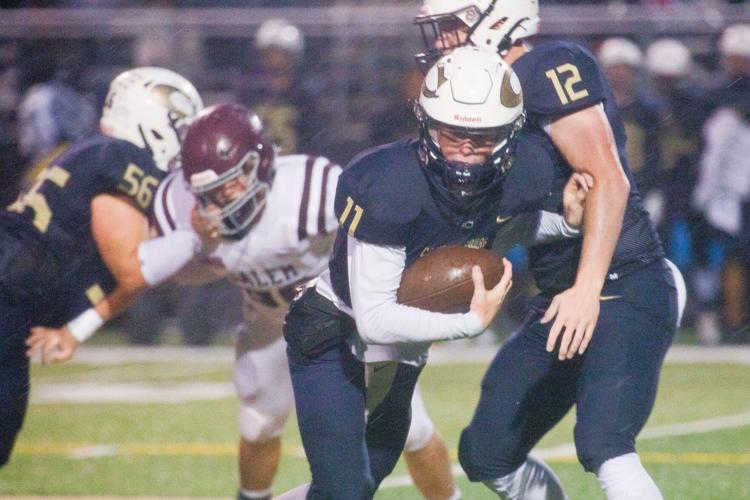 Christiansburg's Jeremiah Thompson carries the ball in the first quarter of the game against Salem at Christiansburg High School on Friday. 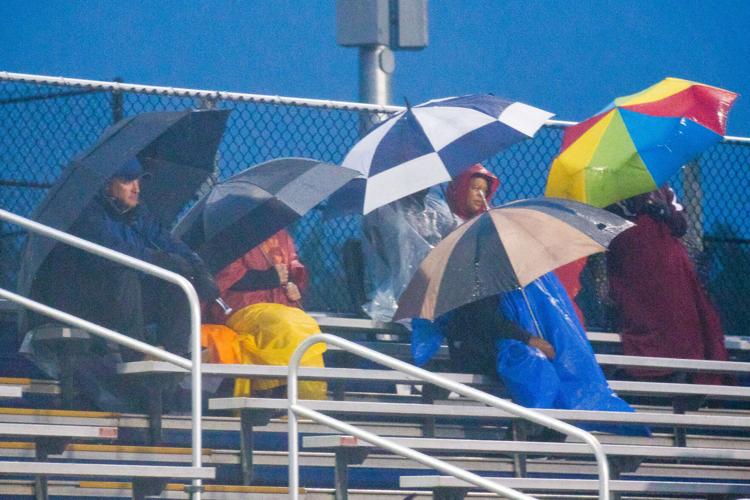 Salem's fans brace for the rain during the first quarter of their team's game Friday night at Christiansburg High School.

CHRISTIANSBURG — Even though it was Salem and Christiansburg playing on the field Friday night, the toughest competitor may have been an unwelcome guest named Ian.

With remnants of the tropical storm coming through the New River Valley, both offenses struggled to move the ball, with a lone Salem touchdown in the third quarter proving to be the difference. The Spartans escaped with a 6-0 road win over the Blue Demons in the River Ridge District clash.

“We needed to grow up and we needed circumstances like tonight to do that,” Salem coach Don Holter said. “You don’t get stronger without adversity. There was a lot of things we could have done better tonight, but we had some grit and we exhibited that and found a way to win.”

Neither offense scored in the first half as rain fell steadily, which combined with gusty winds made throwing the football almost impossible. In the second half the Spartans decided to stay on the ground, not throwing a single pass in the final two quarters.

“We were trying to get some conditions that would allow us to complete some passes, but obviously that didn’t happen,” Holter said. “We wanted to win the line of scrimmage and get our 4 yards and then get another 4 yards. If we could keep moving the chains and protect the football, we felt like we’d have opportunities to be successful.”

Salem (5-1, 2-0) put that game plan into use on its opening offensive drive of the third quarter. After getting the ball on the Blue Demons’ 41 following a 12-yard Christiansburg punt into the wind, the Spartans drove down the field in nine running plays. The possession was capped off by a 5-yard touchdown run by Peyton Lewis to make it 6-0 with 5:17 left in the third quarter.

Christiansburg (3-2, 0-1) moved the ball into Salem territory on three different possessions in the fourth quarter, but the first two drives ended in lost fumbles. The Blue Demons finished the night with four lost fumbles.

With a little over two minutes left in the game, however, Salem elected to go for it on a fourth-and-4 from its own 27 instead of punting into a strong wind. DaRon Wilson ended up being 1 yard short of the first down on a quarterback keeper, giving Christiansburg one final chance.

Christiansburg looked like it had a touchdown on the first play of the next possession when running back Tanner Evans threw a pass to Jayron Thompson, who got behind the Spartans defense. The throw, though, was just out of the reach of Thompson in the end zone.

Three plays later, quarterback Cam Cooper’s pass to Brody Blount was incomplete on fourth down, sealing the win for the Spartans.

“We knew this would be a scrum of a game,” Christiansburg coach Alex Wilkens said. “Take your hats off to Salem. They made a couple more plays than we did.”

Wilkens also wasn’t using the rough weather conditions as an excuse for his team’s defeat.

“This is exactly the type of game we wanted to play,” he said. “We wanted to be physical and run the ball. We’d play it every week like this if we could.”

Salem’s DaRon Wilson runs the ball against Christiansburg in the second quarter on Friday night.

Christiansburg's Jeremiah Thompson carries the ball in the first quarter of the game against Salem at Christiansburg High School on Friday.

Salem's fans brace for the rain during the first quarter of their team's game Friday night at Christiansburg High School.